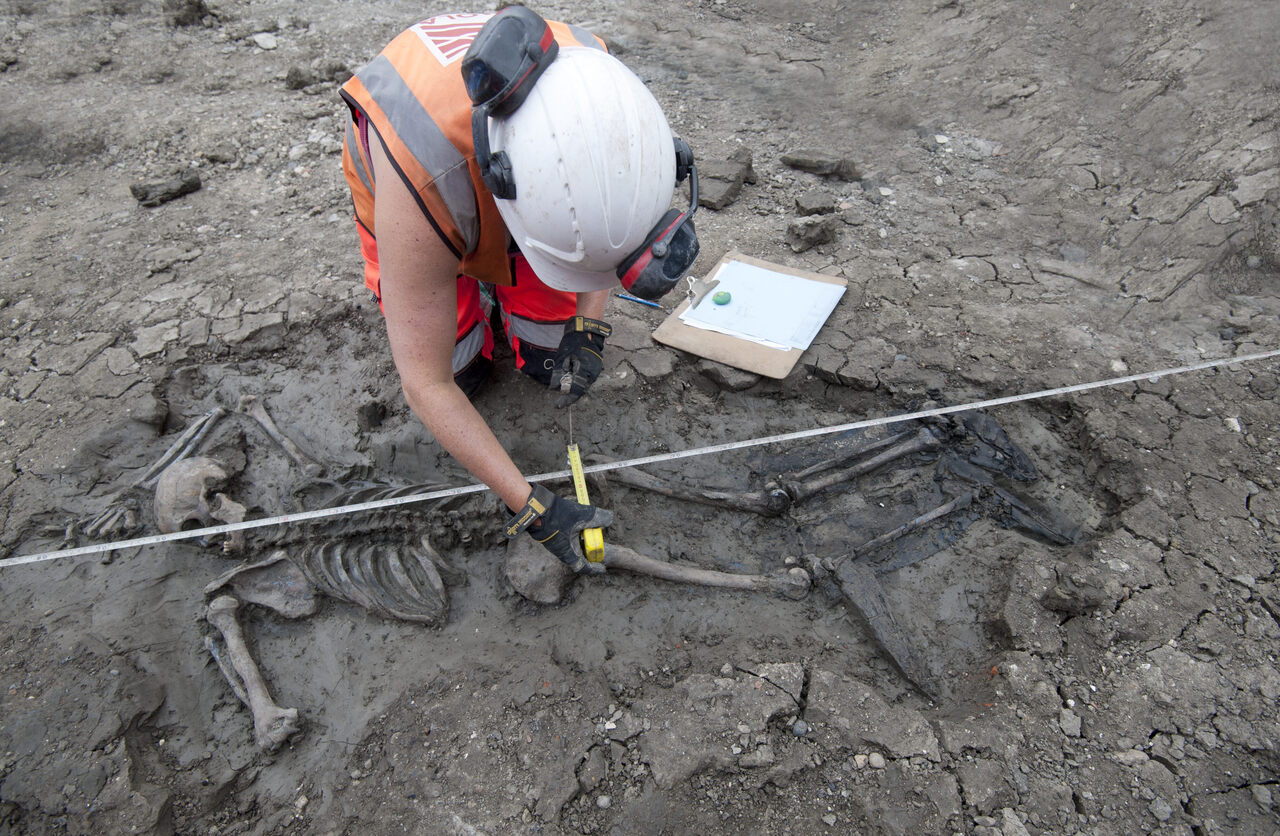 Archaeologists uncover the remains of the "Booted Man" in London. MOLA Headland Infrastructure
In This Story
Destination Guide

Beneath London is a layer cake—thousands of years of civilization, stacked atop one another—on the shores of the Thames. Whenever an excavator hits the soil, which happens a lot, there is always the possibility of a chance encounter with old bits of leather, pieces of shipwrecks, or the bones of a long-forgotten urban resident, preserved by the muddy shore.

A recent discovery has London archaeologists scratching their heads. It is the skeleton of a man, lying face down with an arm splayed dramatically over his head. His most distinguishing feature? His footwear. The skeletal remains are clad in a remarkably intact pair of thigh-high leather boots, resulting in his nickname: “Booted Man.”

“We find a lot of skeletons, but you don’t often find a skeleton lying on his belly with his boots on,” says Lucie Altenburg, conservator at Museum of London Archaeology (MOLA) Headland. “It’s quite unusual to find that much leather on a person lying flat on the shore of the river. It’s a bit mysterious.”

Luckily, there are some clues.

Historians specializing in leather believe the man’s boots date to the late 15th century. Leather was an expensive and prized material at the time, and specialists at MOLA think the boots would have been ideal for the sticky mud along the shore of the river. This particular pair was reinforced with extra soles.

“By studying the boots we’ve been able to gain a fascinating glimpse into the daily life of a man who lived as many as 500 years ago,” said Beth Richardson, a finds specialist at MOLA, in a statement. “They have helped us to better understand how he may have made his living in hazardous and difficult conditions, but also how he may have died.”

Analysis into the bones reveals a harrowing life and death. His final position suggests the Booted Man died after falling in the mud, after which his remains were covered by sediment. An osteological examination shows that the fatal fall wasn’t his only misfortune. His bones indicate multiple healed breaks, as well as evidence of osteoarthritis, a painful degenerative joint disease. Researchers also discovered deep grooves along his teeth, suggesting that he spent much of his life using them to hold something, possibly a fishing rope.

“I would love to know, what he was doing and how did he end up there? That’s the question we’ll never really have an answer to,” says Altenburg. “His boots are probably an indicator of his job, mudlarking or fishing. But there’s so much we don’t know.”

Altenburg says the wet alluvial soil where the booted man was found provides the perfect conditions to preserve leather and human remains. “This kind of clay is really dense and it dries rock hard,” she says. “You’ve got a layer of organics degraded in it, so it smells fishy and you can really tell you’re by the river.”

The man was found 20 feet down, during excavations for the Thames Tideway Tunnel, a massive sewer project. The site of the discovery location was a bend in the river close to where the medieval Bermondsey Wall once stood.

Altenburg says MOLA will continue to analyze the Booted Man, and hopefully dig up some further answers. A moss-like substance was found in his boots, which will go to their archaeological botanist for analysis. They suspect that it was used as insulation.

While the Booted Man may have met an unfortunate end, the final and (most likely) worst day of his life is a gift to archaeologists and historians who want to understand London life was like hundreds of years ago.

“London’s history never stops giving,” Altenburg says. “We’re literally living on layers from prehistoric times to Roman times, medieval, postmedieval, and then somewhere in between all of that you’ve got the man who’s just kind of dropped dead with his boots on.”

This slave trade is well known to historians, but this is the first known wreck from it.
military history

The 18th-century soldier, statesman, and abolitionist was also a character in the hit musical 'Hamilton.'
archaeology

It helps to be curious, low to the ground, and not afraid to look a little silly.
rocks

It's a recent riff on an ancient Scottish tradition.
Video • Wonder From Home

Found: The Remains of Sally Hemings' Small Room at Monticello

It was right near Thomas Jefferson's bedroom.
Read more
Thanks for sharing!