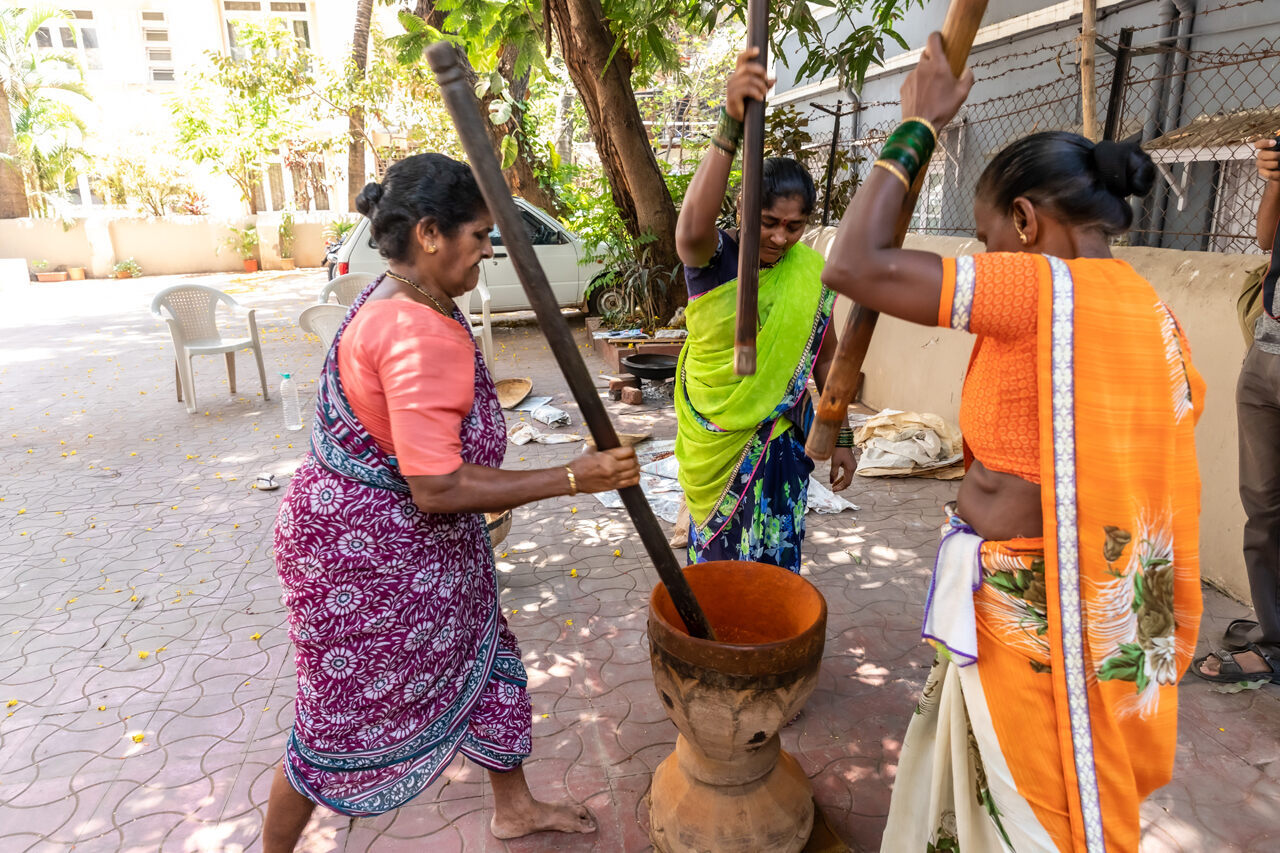 Making the spices is often a symphony of jangling bangles and rhythmic pounding. Jude Albuquerque
In This Story
Destination Guide

First came the burning eyes. Then the uncontrollable sneezing.

I was seven years old and watching three sari-clad ladies, each holding a tall, wooden pestle, adroitly throw their sticks into the center of a deep wooden vat. It was filled with dried chilies, which explained the pungent aroma in the air. Thump-thump-thump. The ladies’ synchronized pounding created a hypnotic beat.

What I witnessed that summer day in Bombay (now Mumbai), India, was the annual tradition of hand-making bottle masala—a fragrant, reddish-brown spice blend named for the darkly colored bottles it’s stored in. Crafted from 20 to more than 30 ingredients, the one-of-a-kind mix is synonymous with the East Indian community—descendants of people indigenous to the North Konkan region on India’s west coast who converted to Christianity. This minority was officially recognized as “East Indians” by the government in 1887.

“When the British took over Bombay, the city’s native Catholic population took up the moniker East Indian to differentiate us from the other Christians who had moved to the city,” explains Reena Pereira-Almeida, creator of the East India Memory Co., a project that documents the group’s history and culture. “Over time, our cuisine, language, clothing, music, etc. came to reflect a mixture of Maharashtrian, Portuguese, and British influences.”

The rusty-hued bottle masala exemplifies this unique amalgamation. Chef Michael Swamy traces its origins back to goda masala, a roughly 20-ingredient mélange made by Maharashtrians using the same hand-pounding procedure that so enthralled my younger self. “Dry blending of spices is a very Maharashtrian thing,” he says.

But this artisanal practice is slowly dwindling. Few families have the space for hired masalawaalis to pound out bottle masala now that Mumbai is a megacity. Instead, they are choosing the convenience of having their mixes made in mills, and some households have filed away their family recipe, reducing the wild, family-by-family diversity of masalas out there. Still, for East Indian home cooks, bottle masala remains at the heart of their kitchen’s spice collection.

“It has an earthy, smoky flavor—very subtle,” says Verna Texeira, a Brooklyn resident who was raised in Bombay. “It’s also very versatile—used with meat, vegetables, or fish—and changes the taste of the dish according to what you are cooking.” In The East Indian Cookery Book, first published in 1981 by The Bombay East Indian Association, bottle masala is listed in 34 recipes, including dishes such as duck moile and prawn lonvas, which are celebrated within the community. It’s also the first recipe in Swamy’s tome, The East Indian Kitchen, in which he shares two versions of the blend.

“East Indian food is a mish-mash,” says Swamy. “You have the Indian side, which is very pure and holistic and includes no meat. Then the Portuguese came and introduced meat eating, like pork, and even bread.”

Sarpatel, made with cubed pork and bottle masala, perfectly represents this fusion. Due to the limited availability of the community’s spice blends, though, and scarcity of East Indian restaurants, the cuisine is a mystery to most of Mumbai. Swamy partly blames its underrepresentation on anecdotal evidence that East Indians are “secretive” and notorious for guarding their recipes.

“I got a lot of whiplash from my aunts for sharing our recipes publicly in my book,” he says. Verna’s mother, Georgina Texeira, admits she’s possessive about the bottle masala recipe she inherited from her grandmother. “I have shared it only with close family and friends,” she says.

This helps make bottle masala, and East Indian cuisine, special: Each family’s recipe differs depending on the area and sub-group they belong to. “The taste and color of the bottle masala will be different for each home and from village to village,” explains my father, who grew up in the former East Indian stronghold of Mumbai’s Pali Village. Some families use a combination of chilies. Others favor the Kashmiri chili, which lends the mix its trademark maroon hue. Common additions include turmeric, black peppercorns, fenugreek seeds, sesame seeds, poppy seeds, wheat, nutmeg, cumin, mugwort … the list goes on.

Like my father, Texeira remembers the masalawaalis going house to house in her hamlet of Kalina to register families interested in having bottle masala or other spice blends made during the warm summer months. She also looked forward to the impending visit from the masalawallah (spice man). Like Santa Claus, he carried a large bag and delivered the pylee—all the spices each family required.

While this home-delivery service no longer exists, Texeira and others visit Mumbai’s larger markets to procure ingredients. Verna, whose mother has been making bottle masala for 30 years, fondly remembers this annual shopping spree and the two- or three-day process of sun drying the spices.

“All the verandahs in the village would have the spices laid out on bedsheets or steel thalis,” she explains. “In the afternoons, my mother would send me to the terrace upstairs to turn the chilies in the sun. It was such a beautiful, sensory experience seeing the yellow turmeric, the round coriander seeds, the red crinkled chilies … ”

Marise Ann Lawrence likens the atmosphere of the masalawaallis’ arrival to a party. As the spice ladies removed the denkhas (stalks) from the chilies, or tossed ingredients in an earthenware dish over a wood fire, they’d chat with her aunts and mother and exchange family stories. “It wasn’t just about the work,” she says.

Depending on the quantity made, the procedure could take a day or a whole week. “It was like a picnic,” adds Texeira. “You’d have to provide them with tea, sugar, milk, and oil, and in the afternoon, they would cook their meal.” My father remembers the spice ladies preparing a dish with dried Bombay ducks, a fish found in the Arabian Sea, which they would char in the wood fire’s embers and smash together with raw onion to make a chutney.

Just as larger families band together for masala-making season, East Indians, as a minority group, unite for community celebrations, religious feasts, and weddings, says Pereira-Almeida, who grew up in India and now lives in Australia. “Those who have settled in other countries come together for occasions like Christmas and Easter,” she adds, referencing the sizeable East Indian diaspora. And traditional East Indian specialties, including those made with bottle masala, always play a starring role at these events.

Once the toasted spices cooled, the masalawaalis would start hand pounding. Standing around a chalice-like okhli—built into the floors of homes in some villages—they established their catchy rhythm, taking turns slamming the spices. “It is pound, sift, repeat. Pound, sift, repeat,” says Lawrence of the three- to four-hour operation.

“I remember their bangles clinking as they worked,” says Verna. Decades later, she remains fascinated by the ladies’ strength.

As mounds of vibrantly colored spices piled up, the masalawaalis gently combined the powders with deft circular hand movements. They then filled narrow-necked beer or whiskey bottles, patiently pushing down the masala with a wooden stick and sealing it with a cork and piece of cloth secured with string.

While many East Indians are nostalgic about the hand-pounding process, most find that making bottle masala—including sourcing and roasting the spices—is too much work, even though the mills have sped up the job. Still, a stubborn few do it themselves to ensure quality, and Swamy believes the traditional method releases the spices’ essential oils slowly, giving the blend a mellow flavor, while mechanical methods leave a slightly bitter aftertaste.

The old-school procedure may soon be relegated to memories, but the love affair with bottle masala continues for this community dispersed around the world. “Other communities say everything we cook is always with bottle masala, that we can’t survive without it,” says Texeira. It’s not much of an exaggeration: On her yearly visits to see Verna in Brooklyn, she always has a packet or two of bottle masala stashed in her suitcase.

“If I call my Mom and ask her what to do if I’m stuck with adding flavor to a dish, she will say just put bottle masala,” says Verna, laughing.

Cook Your Way Through Regional Indian Recipes With This Online Archive

A student project is digitizing the subcontinent's community cookbooks.
food

Go Beyond the Grocery Store With These Seven Innovative Spice Companies

These seasonings connect you to the communities that produced them.
military history

And why does it need to "snap"?
Video • Gastro Obscura

Inside the World's Only Chile Pepper Research Institute

The center has spread spicy knowledge for decades.
Read more
Thanks for sharing!