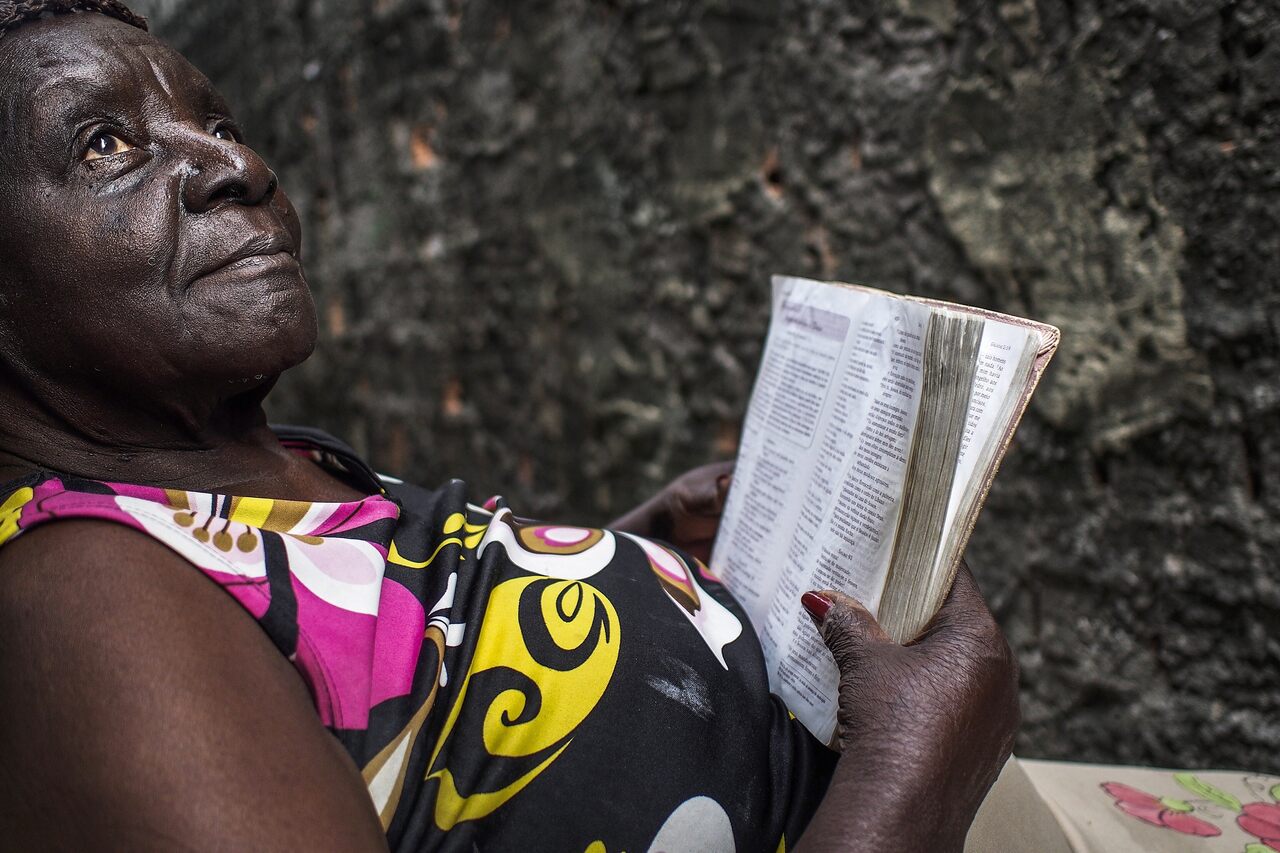 Deusdete Fonseca, a member of the Quilombo do Barranco de São Benedito, in 2014. Raphael Alves/AFP/Getty Images
In This Story
Destination Guide

In Manaus, the largest city of the Brazilian Amazon, there’s a community whose members pride themselves on being direct descendants of people enslaved and brought forcibly across the Atlantic from Africa. It’s called Quilombo do Barranco de São Benedito and it’s 129 years old.

At 6 p.m. on one special day a year, usually in April, the “lifting of the mast” opens the festivities of St. Benedict, their patron saint. While some people chat, others help decorate the “mast,” a large tree trunk that has been sitting in front of St. Benedict’s chapel for a week. The decoration consists of bananas, papayas, oranges, and tropical fruits popular in the region, such as cupuaçu and tucumã.

Throughout the afternoon, friends and family gradually arrive and there is plenty of hugging and kissing. The older men and women sit in a line of chairs on the landing of one of the houses next to the chapel. Across the street, a band plays samba and the Afro-Brazilian rhythm fills the air. There’s juice and cake and a murmur of animated conversation.

“St. Benedict is a saint of abundance,” says Keilah Fonseca, president of the community women’s association, Crioulas do Quilombo de São Benedito. “We believe that in a house where there’s an image of the saint there will always be bread on the table.”

Brazil received more African slaves than any other country—more than 5 million people, according to the Slave Voyages database. It was also the last country in the Western world to abolish slavery. Quilombos are communities in the hinterlands founded by people of African origin, many of whom were escaped slaves.

Keilah Fonseca is a fifth-generation descendant of one of the founders of Quilombo do Barranco de São Benedito, Dona Severa Fonseca. According to tradition, Dona Severa traveled more than a thousand miles to reach Manaus from the state of Maranhão. That was in 1890, just a few years after she was emancipated from slavery. She came with her three sons and a wooden statue of St. Benedict, the black saint who lived in Italy in the 16th century and was also the son of enslaved people. Over the years, the devotion to the saint grew and the statue became a symbol for the community.

Vinicius Alves, a researcher who has studied the origins of the Quilombo do Barranco de São Benedito, explains that Manaus attracted many people from other parts of Brazil and abroad at the end of the 19th century and the beginning of the 20th. It was a period of wealth and prosperity. Because the region had the world monopoly of rubber production, money flooded in. The governor of the state, a man named Eduardo Ribeiro, initiated an ambitious plan of urban reform. Some of the most beautiful buildings of Manaus were built around this time, including the iconic Teatro Amazonas, earning the city the nickname of “Paris of the tropics.”

“When Eduardo Ribeiro started executing these public works, the political opposition didn’t want him to do it. He then had to recruit workers from other states. He brought workers from Bahia and Maranhão, and hired artists from outside Brazil—from Portugal, France and Italy,” says Alves.

Ribeiro was both black and from Maranhão, and brought many fellow countrymen to work in Manaus. He passed legislation that allowed the state to pay for trips and accommodations, and to help newcomers to find jobs. The law that abolished slavery had just been passed. Many former slaves moved to Manaus and established themselves in an area that was soon called “Vila dos Maranhenses,” named for those who came from Maranhão. This area later became the Quilombo do Barranco de São Benedito.

There are many communities established by former slaves across Brazil, but few of them are in cities. Most quilombos, as they are called, are in forests, particularly on the Atlantic coast, where slavery involved working in sugar mills and mines.

Until recently, the history of the colonization of the Amazon region was told as a clash between Portuguese colonizers and indigenous communities that were enslaved and exploited. According to this view, there were few African slaves, and they were not that important for the economy. This would explain why Amazonas was one of the first states in Brazil to abolish slavery, four years before the rest of the country. However, in recent years historians have described a much more complex scenario, one where black slavery did exist but was later made invisible.

Ygor Rocha Cavalcante, a researcher at the Federal Institute of Amazonas, notes that there were black slaves in the Amazon region as early as 400 years ago.

“The first efforts to bring African slaves are from the 17th century, with the biggest increase in the 18th century,” Calvacante says. “And during the 19th century there was an upward trend in slave traffic until, more or less, the decade of 1880, when at the peak of the abolition campaign deputies tried to impose a tax burden to make the slave market unviable.”

During the second half of the 19th century, slavery began to be considered outdated in Amazonian society, and the rich tried to distance themselves from it. According to Cavalcante, this is one of two reasons for the historical invisibility of black people in the region. The other reason is that these populations did their best to keep a low profile and stay unnoticed. Because even after abolition, black people were still very vulnerable.

“There were many [black] mothers who stayed in the houses of their lords because leaving meant taking risks,” says Cavalcante. “Risks such as being re-enslaved, kidnapped, sold or having your son abducted,” says Cavalcante. “In this context, being invisible was a strategy of survival.”

Yet the region’s black population had a strong influence on local culture. For example, many regional dishes, such as the vatapá and the mungunzá, have an African origin. And it is not a coincidence that the first samba school of the state of Amazonas, a musical tradition with deep African roots, was founded in the vicinity of the Quilombo do Barranco de São Benedito.

“Manaus is also a black city … not only from the point of view of the work they did, but from a cultural point of view,” says Cavalcante. “You have black workers occupying the city, building it from their own logic and ignoring the dominant power of the city, that saw itself as white, European, ‘civilized.’” In the late 19th and early 20th century, black workers helped establish the city: They washed clothes, sold food in the streets, and worked as manual laborers.

In the 1970s, a movement for greater awareness of black history emerged in the Amazon region. One of the leaders was Nestor Nascimento, who was a great-grandson of Dona Severa, the founder of the Quilombo do Barranco de São Benedito. It was also around this time that academics started to acknowledge the influence of black people in the Amazon, and to correct the historical record.

In this regard, one of the recent achievements of the Quilombo do Barranco de São Benedito has been the official recognition of their community as a quilombo. It was certified in 2014, following a year-long process in which officials visited the community and documented its history.

But while the certification is certainly a milestone, it has not granted the community all the support it needs from public authorities.

“Public policies for quilombolas here in the Amazonas [state] are still crawling,” says Jamily Silva, another great-granddaughter of Dona Severa, and the organizer of the St. Benedict festivities. She notes that getting support from the local government for the festival of St. Benedict is always arduous, despite it being one of the oldest traditions in the city. “Every year is the same, even if it’s in the state calendar we still have to run after them, and we don’t always get what we ask for.”

On festival day, anticipation grows as six o’clock approaches. The mast is already completely covered with fruits, and someone is adjusting the ropes to lift it. The samba band across the street stops playing. Those who were not already in the street step outside their houses and wait, everyone’s gaze turned to the mast.

One of the old ladies that was seated next to the chapel stands up with difficulty. “I can’t stay to see how the mast is lifted. It makes me think of my brothers, my uncles … All of those who have already left us,” she says as she hobbles home, ignoring her relatives’ objections.

When the clock hits six, someone stands in the middle of the street and stops the coming cars. There are no traffic police, no public authority. Men and women hold the rope tight and wait for a signal. Then, the call to lift the mast comes and everyone pulls at the same time. There is a moment of uncertainty, when everyone seems to suddenly realize all that could go wrong trying to erect a 40-foot tree trunk without any safety measures. But it soon fades away, as the mast goes up slowly without sliding. It takes them a long minute to fit the mast into the deep hole that will hold it and keep it straight. When it is finally in, everyone breaks into spontaneous applause and cheers to St. Benedict.

This slave trade is well known to historians, but this is the first known wreck from it.
food

Despite James Hemings’s leading role in Jefferson’s kitchen, he’s credited with only a handful of recipes.
statues

It was discovered "forensically," thanks to Douglass's distinctive usage of an unusual word.
Video • AO Docs

In Maryland, archaeologists are racing rising waters to find traces of the past.
Read more
Thanks for sharing!