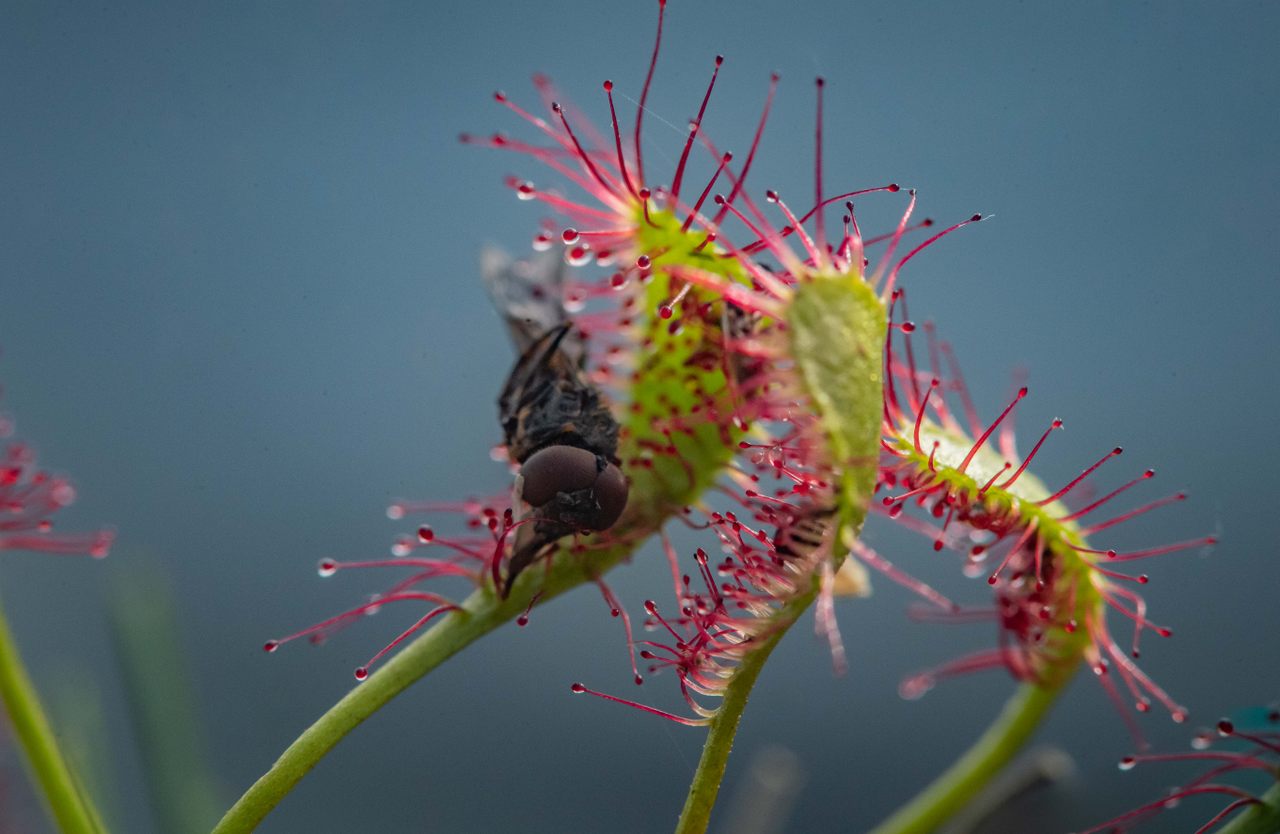 The great sundew is back on the scene. Courtesy of Chester Zoo
In This Story
Destination Guide

Joshua Styles doesn’t exactly take pleasure in finding flies and spiders roaming around his home in northwest England, but he does find them useful. Their fate, he says, is “unfortunate.” When Styles spots an insect, he kills it, dismembers it, and feeds it to one of the numerous carnivorous plant cuttings he’s nurturing in his garden. “I wouldn’t normally do it,” Styles says. “But without animal tissue to digest, they just don’t grow, and eventually will die without it.”

Styles wants these insect-eating plants to take root in the lands where they once flourished. Many carnivorous plants, including the great sundew—also known as the English sundew, Drosera anglica—used to be much more common across Britain. Then many of the peat bogs where they lived, which are rich with decaying plant matter, were drained and harvested. Now, Styles says, that species—a pink-haired punk of the carnivorous plant world—clusters in fewer places in England. The U.K.’s National Biodiversity Network’s digital atlas notes its endangered status, and the IUCN Red List has described it as “near threatened,” adding that existing populations are fragmented, and many are declining. Through his conservation organization, the North West Rare Plant Initiative, Styles is partnering with other nature groups around Greater Manchester—including the Lancashire Wildlife Trust, Chester Zoo, and more—to cultivate and reintroduce them into parcels of land that are becoming boggy again.

According to the Risley Moss nature reserve, in Cheshire, 94 percent of the lowland bogs in the U.K. have been devastated or badly damaged by large-scale, mechanized peat harvesting. Peat has long been used for fuel and agriculture in Europe, but because the harvest releases greenhouse gases and marks the landscape, several places, including Ireland and the U.K., have pledged to phase out the practice and, where possible, restore the bogs.

Risley Moss was once one of those scarred places. Peat was harvested there from 1872 to 1928. But since the late 1970s, efforts have been underway to help the bog recuperate, including several rounds of rewetting. Now, Risley Moss is becoming a waterlogged wonderland again—and it’s one place where Styles recently planted some of his sundews. The way Styles puts it, he’s simply helping to return altered landscapes to their former states. Great sundew, like other plants that thrived around peat, “used to be there, but weren’t seen in a long time,” Styles says. “I’ve just put it back.”

To prepare the plants for their future homes, Styles raises them in handheld versions of the mossy landscapes: containers holding lumps of damp peat from the site where they’ll wind up, covered with mesh overlay to keep birds out. He knows it’s time to feed the plants whenever their leaves unfurl. When the hairs are visible, “that’s when you put a bit of dismembered spider onto it,” he says. Small plants can’t handle bigger bites, he adds: “If you’re feeding a very small plant a very big object, it can fall off the leaf.” (In an 1875 volume about insectivorous plants, Charles Darwin, who was famously fascinated by their hunger, once recounted feeding a great sundew “bits of roast meat” and “two bits of boiled cork, one bit of boiled thread, and two of coal-cinders taken from the fire,” to see what diet it preferred.)

Before Styles tucks a plant into its forever home, he canvasses the prospective location to make sure it stands a good chance of surviving there. One promising sign is the presence of “common associates,” he says—other plants with similar preferences that are already thriving in the area. Ideally, the plants will go into the ground between April and August, when the peat bogs are least likely to be flooded. To make sure the little plants are adjusting well, Styles visits each reintroduction site once within the first six months, and annually thereafter.

Ten of his great sundew plants went into bogs this year. “Although that doesn’t sound like a lot, each individual can produce thousands of seeds,” Styles says. (In all, he hopes to help buoy the ranks of 43 species, carnivorous and otherwise.) It’s too soon to say how many itty bitty great sundews will sprout from the “dust-like” seeds that the initial 10 will release—but the population of a boggy neighborhood can boom quickly. Last year, Styles planted a cohort of 15 lesser bladderwort, a rather dainty-looking carnivorous species, in Risley Moss. Their numbers have already grown to 3,000. “A small population, in the right conditions, can turn itself into a big one in no time at all,” he says.

In San Francisco, an East German Restaurant Is a Portal to the Past

This ‘Cryptically Carnivorous’ Plant Has Been Hiding in Plain Sight, Waiting for Flesh

The western false asphodel has an appetite for insects, but it’s not a great time to be a meat-eating plant.
islands

The “she generalissimo” nearly won the English Civil War for her husband, King Charles I.
List

A 14-stop bar tour through Great Britain's past.
Video • PinDrop

6:55
Want to see fewer ads? Become a Member.
From Around the Web
Atlas Obscura Trips
Southern England: Lore of Dartmoor
View This Trip
Thanks for sharing!