(Looking out from the ruins of a cocaine kingpin’s vacation home. Photo: Luke Spencer.)

About an hour’s sail northwest from the old Spanish port city of Cartagena de Indias are a group of about 30 islands known collectively as the Islas de Rosario. With their bleached white beaches, clear blue crystal waters and abundant wildlife, they are a true tropical paradise. Hundreds of daytrippers from Cartagena descend on La Playa Blanca year round, tourists and locals alike.

But a little further out into the Caribbean Sea lies an island whose way of life has remained largely untouched for hundreds of years. La Isla Grande is home to about 800 islanders who sustain themselves mostly by fishing and farming, cut off from the modern world. With no running water and electrical power lines, daily life still generally revolves around when the sun rises and sets. But this idyll did the get attention of one vacationer, who built a palace, now abandoned.

That would be infamous King of Cocaine, the original El Patron, Pablo Escobar.

At the far side of the island, hidden and secluded between the tropical forest and the Caribbean Sea, lies a grandiose complex of luxury buildings. The decay of the structures mirrors the downfall of the man. At the height of his powers, Pablo Escobar was responsible for around 80 percent of the world’s cocaine. He headed the Medellín drug cartel, smuggling over fifteen tons of cocaine into the United States every day. His stock piling of cash was such that his brother Roberto Escobar estimated they were spending around $1,000 a month just on rubber bands to wrap around the never ending piles of money. His policy for smuggling cocaine into the US was based on what he called “plata o plomo,” meaning “silver or lead”; that is, accept the bribe money or face the bullets. By 1989 he was worth an estimated $30 billion, with Forbes magazine listing him as one of the world’s ten wealthiest men. And Escobar was as ruthless as he was rich; from his stronghold fortress in Medellín, he fought a deadly drug war with the rival cartel de Cali, the Colombian government and the CIA.

The view from a broken window onto what was once lush gardens. (Photo: Luke Spencer.)

As befitting one of the world’s richest men, Escobar’s life was filled with excess. As well as countless luxury cars, he had 15 planes and six helicopters. His opulent home in Puerto Tiunfo, the Hacienda Napoles came complete with his own zoo of rhinoceros, giraffes, elephants, and a dinosaur park made with genuine prehistoric bones. He bankrolled his beloved football team, Atletico Nacional to the extent they became the first Colombian team to win the South American club championship, the Copa Libetadores. As detailed in the 2010 ESPN 30 for 30 documentary, “The Two Escobars,” corruption and bribery dominated Colombian soccer, and it is alleged many match officials were bought off in the process.

For his party home on La Isla Grande, Escobar’s plans were no less ostentatious. He commissioned a giant complex featuring a mansion, waterfront apartments, a palm court centered around an enormous swimming pool and helicopter landing pad. With over 300 rooms for guests and party goers, no expense was spared, even down to the gold shower heads in the bathrooms. Escobar’s playground resembled a strip from Miami’s South Beach in its 1980s heyday. 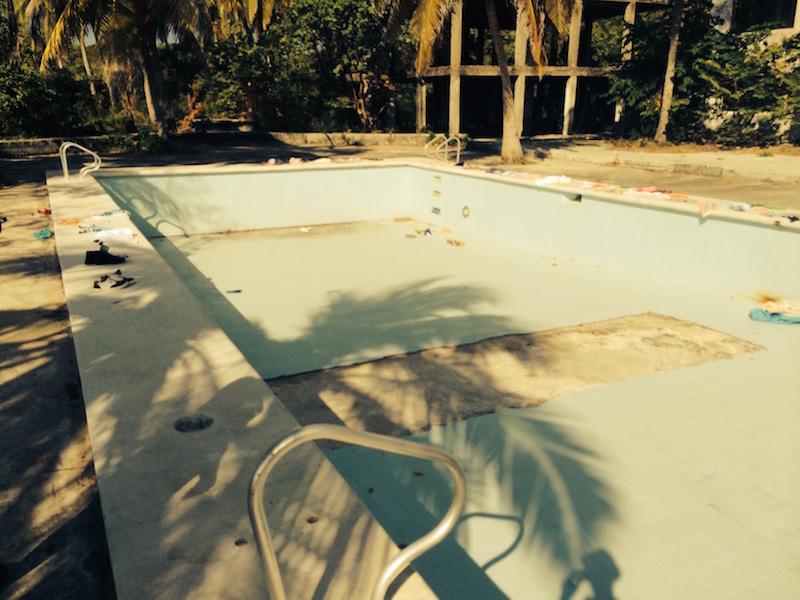 To get to the island, which is only a few kilometers long, you have to find a special boat from Cartenga. Most of the islanders live around the main town of Orika, where impressive recycling and conservation efforts are based. There were no signs or organized trips to the Escobar estate: I asked a worker at an ecohotel about its location—known locally as  “la casa grande,” he agreed to take me there.

After hours of trekking through the Caribbean forest, first on canoe through dense mangrove swamps, then by bicycles with the suspension long gone, and finally by foot, I saw a glimpse of white concrete through the thick tropical undergrowth. The forest floor gave way to an old ornately tiled pathway that led into Escobar’s palace. A 30- foot luxury speedboat lay on its side, overgrown with tropical flowers as I walked through the desolate entrance.

Like some kind of coke-fueled Xanadu, the sprawling complex was already being reclaimed by nature. The once-lush gardens were now home to a family of giant wild pigs. Stepping into the main mansion, it had been decorated with white tile and marble, with the cracked walls still showing the 1980s color schemes of pastel blue and coral pinks. The lobby led to an immense courtyard, shaded with palm trees overlooking the Caribbean sea. The court was dominated by an oversized and drained pool. The last swimmers may have long departed but there was still evidence of recent human activity. Clothes had been laid out to dry along the chipped blue edge of the pool.

Great parties were once had here. (Photo: Luke Spencer.)

Across the pool, emerging from another crumbling mansion, half a dozen men stepped out into the sunlight, silent, and holding rusted machetes.

My guide Jesús put a cautionary hand on my arm signaling me to be quiet. And with good reason; simply stepping foot anywhere near this place in the late 80s or 90s, would have had you killed on sight. Escobar maintained an army of ruthless bodyguards, led by ‘Popeye’ John Jairo Velasquez, who alone boasted that he’d murdered 300 people, and planned the deaths of over 3,000 hits, including his own wife.

Inside the mansion. (Photo: Luke Spencer.)

Colombians have a complex relationship with Pablo Escobar. His ruthless criminal activity is well documented. But he also carefully cultivated a Robin Hood image with the working classes of Colombia. He built deluxe soccer fields in the barrios, and organized teams and leagues for the children. The street vendors of Cartagena, las Palenqueras sell t-shirts bearing the face of El Patron alongside replica jerseys of the Colombian hero and Real Madrid forward James Rodriguez. To what extent Escobar was a genuine benefactor for the working classes of Colombia, versus the hagiographical image he created around himself, is hard to judge. Certainly his public funeral resembled the passing of a popular king, and not a mass murderer. But his popularity in the working classes also benefitted him when he came to run for public office. Asking Jesús and other islanders on Isla Grande whether El Patron did anything for them, the answer was no. I was struck by the overt friendliness of the people of Orika and by the paradox of their island home. They’ve never had a police force  according to Jesús, yet through the forest was the fortress of the world’s most lethal drug baron. Jesús had only ever lived on the island, and he said growing up, you just never went near there.

The plants have grown into the property. (Photo: Luke Spencer.)

As we walked towards the machete wielding Cartagneros, Jesús began to explain what I was doing. They agreed to let me take photographs and wander around, but just not of themselves. Jesús explained that they were squatters. One of them used his machete to cut us open coconuts, which we drank together in the shade of the giant abandoned mansion. I told him he lived in a nice house. “The biggest house,” he replied in Spanish, smiling.

Even in ruins, the place has a certain glamour. (Photo: Luke Spencer.)

In recent years, Colombia has undergone a marked renaissance, especially where tourism is concerned. And Escobar’s legacy is being readjusted accordingly. After his death, the Hacienda Napoles fell into the hands of the Colombian government. There are plans to turn the mansion into a drug museum, theme park, and zoo, complete with Escobar’s menagerie of exotic animals which still run wild in Puerto Tifuno. But his mansion in La Isla Grande, also government owned, has steadily fallen into ruin. Beyond the swimming pool, a series of broken down chalets overlooked the ocean. This is where visiting speedboats would have docked, and where heavily armed lookouts were posted. As with the larger structures, the individual chalet apartments have long since begun to deteriorate at the hands of the relentless Caribbean trade winds. For the people of Isla Grande, life carries on much as it did before Escobar arrived.

It's for sale in New York's Hudson Valley.
murder

How a Homeless Woman Rescued a Brazilian Murder Castle

Thousands of years ago, artists documented their world on rock walls—including, perhaps, ritual use of hallucinogens.
churches