Inside the World of British Brickophiles - Atlas Obscura
Want to see fewer ads? Become a Member. 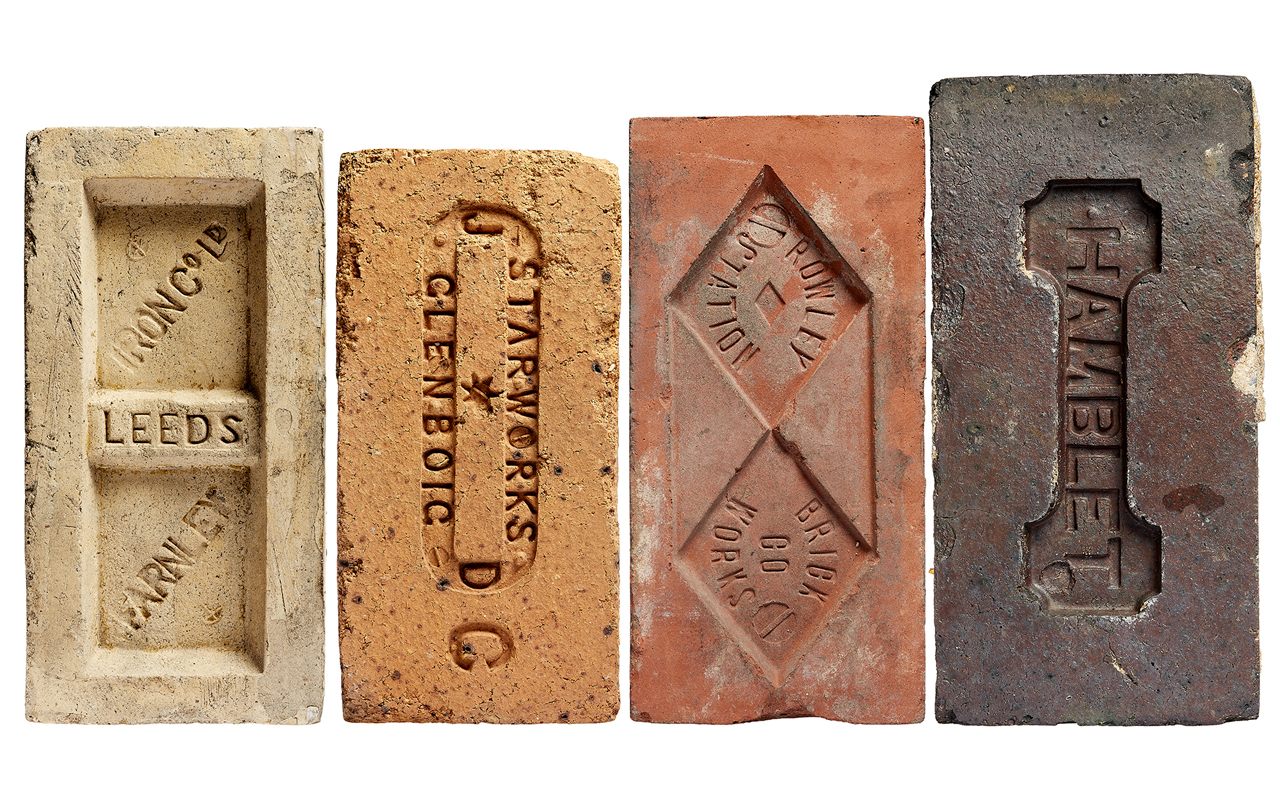 Devoted collectors are often drawn to bricks with striking typography and design. These appeared in Patrick Fry's Brick Index. Courtesy of CentreCentre, photography by Inge Clemente

Four hundred bricks line Jason Harris’s hallway, and none of them hold the ceiling up. Arranged in an earthy ombre from ruddy terra cotta to cream, these once-functional rectangles are now purely for show. The London-based architect doesn’t think this hefty display lends him much gravitas in British brick collecting circles, though. “I’m a lightweight brick collector because I just like the color and the shapes,” Harris says. “I feel a little bit of a fraud amongst the collecting community.”

And he’d definitely be a fraud among builders, since his bricks all face the wrong way. Their frogs, the indentations on the top sides, are exposed to reveal writing that’s usually hidden in a wall.

Frogs were first pressed into bricks in the late 18th century, to make for easier handling and allow room for extra mortar. A century later, manufacturers were stamping their names and addresses into the frogs, with lettering ranging from the primly functional to the wildly ornate. “It’s design for utility that often has a strange, imperfect quality that really appeals,” says Patrick Fry, a graphic designer who published a life-sized Brick Index book based on Harris’s collection. “It holds an honest story.”

These stories can only be read once old buildings are no longer standing. But as bricks loosen from the grips of Victorian homes, factories, and shops, their embossed frogs lure British brickophiles to stockpile them.

Henry and Mary Holt’s collection of a whopping 7,000 bricks supposedly began after Henry saw a frog coincidentally inscribed with his last name: “E Holt and Company, Rossendale.” A retired builder, Henry Holt might have missed the feel of a brick because he spent the next three decades (into the early 1990s) hunting for more, using outdated maps to pinpoint old brickworks and collieries. He’d then try to find the fruits of those brickworks at nearby demolition sites.

The Holt collection is legendary in groups like the British Brick Society, a club founded in 1974 by academics who wanted to study the history of brick building and brickmaking. Today its members are a mix of professionals and hobbyists, with a few in either camp collecting bricks. British Brick Society member John Harrison was interested in brickwork history first. “I am not a collector who chose to collect bricks,” explains Harrison. “I am someone with an interest in brickwork and bricks who ended up collecting some.”

Harrison first decided to keep a brick around 1995, although he can no longer remember which one it was or which of his many crates it’s in. “The bricks that excite me most are those that have some interesting feature or something I didn’t know about,” he says. His latest addition is one with a serrated face opposite the frog.

There are no set rules that cement what makes one brick more precious than another. Collectors’ decisions about what to hoard can be quite personal. “Collectors seem very catholic in their attraction to distinctive bricks,” says Michael Hammett, a retired architect and the enquiries secretary of the British Brick Society. But he can’t single out what makes one more distinctive than another.

Some collect bricks from one region, a designation that’s spelled out on the frog or can be guessed by the brick’s color. Since bricks are tinted by the clay around the brickworks, color is a telltale sign of geography—making Harris’s wall arrangement more than just a pretty gradient, but an alternative map of the U.K. Harris rarely adds more bricks to his lot, but when he does, he likes slate-colored Staffordshire blues. “They’ve got this really strong color and a lustrous sheen about them,” says Harris. “They’re almost metallic.”

Other collectors care more about typography. The letters ‘N’ and ‘S’ were often reversed in frog stamps from the late 19th century, before brickwork branders got the hang of flipping the lettering. “Look out for those, in older bricks,” urges industrial historian David Kitching in his introduction to Brick Index.

While there aren’t clear rules about what to look for in old bricks, there is solid etiquette about where you can hunt for them. Demolition and refuse sites and are considered fair game. Without brick fanatics like Harris and Holt poking around, many specimens would be lost forever. “They’re very rarely reused—they’d just be crushed up as hard core to go back in the foundation of something,” Harris explains. Just don’t abscond with a piece of a heritage building without asking permission. And don’t steal one from a garden.

Many collectors plant their bricks in gardens if they can, either tidily displaying them or just piling them up so they’re out of the way. Fry points out that organizing heavy bricks calls for more space than many people can allocate in their flats. Harrison stores his 98 bricks in crates. Holt reportedly spread his collection over three garages, a box room, an outhouse, and a few cupboards. Harris designed a permanent installation in his hallway.

He considered using the bricks to decorate his architectural firm, but the reception area isn’t quite big enough—and besides, the architects he works with think the whole thing is strange. “They all think it’s rather funny, and a bit weird,” Harris says with a laugh. He’s happy to live with his collection at home, instead. “When you walk along the wall, it’s like calling cards from our industrial past. It’s fascinating,” he says. “Things have changed a lot in the U.K., but it’s like a mini history lesson in the most productive time in our country. It’s very nostalgic to walk along and see these names.”

The story behind one of the greatest collections of African art in the world.
abandoned

Built from recycled materials by an eccentric con artist in the 1930s, the curious creation was demolished—and then reborn.
architecture