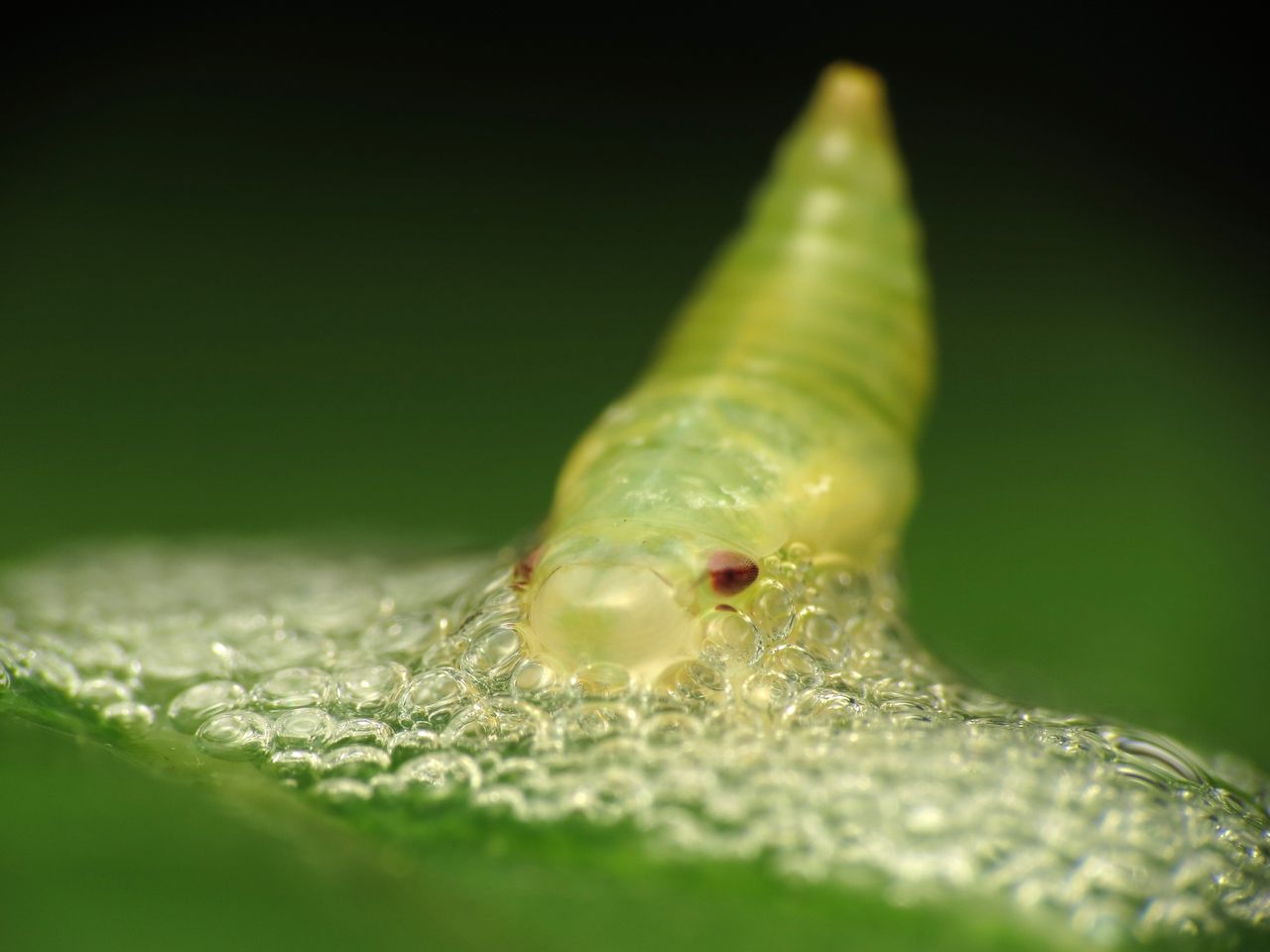 Beware the baby spittlebug, harbinger of doom? Katja Schulz/CC by 2.0
In This Story
Destination Guide

If you see a little bit of spit hanging from a plant, it might not be what it seems. Sometimes it comes from where you expect—the mouth of a human—but sometimes it’s been secreted from the sticky, bubbling anus of the spittlebug. If you’re in Britain and see the former, look away. If it’s the latter, tell a scientist.

For the past month, researchers across the United Kingdom have asked people to report any sightings of these bugs, so they can prepare for and combat the potential spread of a lethal bacterium, Xylella fastidiosa. As one of the chief carriers of Xylella, the usually harmless spittlebugs (though some are agricultural pests) have become vessels of doom for plants across Europe. This citizen science project, which has already logged more than 11,000 sightings, is one stream of work under the wider BRIGIT project, which is tasked with helping the United Kingdom bolster its defenses against vector-borne plant pathogens such as Xylella. The sightings will help researchers model how the disease might spread if it pops up.

“We need to know where the potential vectors occur in the U.K., what plants they feed on and how they move between habitats and across the U.K., to understand how, how far, and how fast the Xylella bacterium might spread if it arrives here,” Claire Harkin, a research fellow at the University of Sussex, writes in an email.

Xylella, thought to have originated in South America, first reared its head in Europe six years ago, when centuries-old olive groves in southern Italy began to wither and die for no apparent reason, according to National Geographic. Scientists suspect the rogue bacterium first hitchhiked to Italy on a coffee plant. It’s since spread elsewhere in Italy, as well as in France and Spain. More than a million olive trees are currently dying of the bacterium, which European Commission describes as “one of the most dangerous plant bacteria worldwide, causing a variety of diseases, with huge economic impact for agriculture, public gardens and the environment.”

Adult spittlebugs pass Xylella by latching on to a plant’s xylem, the tubes within a stem that help transport water. When the bugs suck out a plant’s liquid, usually without much harmful impact, they also collect whatever bacteria lurk in the xylem, and then inject it into whatever plant they latch on to next.

Death by Xylella is slow and protracted, and there is no known cure. The bacterium traps plants in eternal thirst by thickening the xylem into a congealed film that prevents the plants from sending water to branches or leaves. This death can be swift or drawn out over several years, and is often initially mistaken for something entirely banal, such as drought or frost damage. And unlike most pests and diseases, which target one specific plant, Xylella has been caught killing more than 500 different species.

Though Xylella has yet to be spotted in the United Kingdom, there’s a sense that it could be coming. “Very little is known about how the bacterium might spread in northern Europe,” Harkin says, adding that most research on Xylella and the bugs that spread it has focused on warmer climates, such as the Mediterranean and South America. “Understanding these factors means we will be able to improve early detection and be better prepared to control the spread of the bacterium if it arrives in the U.K.,” she adds.

Fortunately, spittlebugs’ spit makes them easy to spot. The insects aren’t always frothy; only juvenile bugs produce these foam nests. Spittlebug nymphs look like larvae, with soft bodies that can reach up to a quarter-inch in length and bulbous red eyes on either side of the head. “Nymphs secrete a fluid through the anus that is mixed with a secretion from the abdominal glands,” Harkin says. “Air bubbles are introduced through a special valve on the abdomen to create spittle that protects the nymph from enemies and desiccation.” In this way, the life of a young spittlebug is sort of metal, a constant battle with the twin demons of predators and drying out, with spit as their armor.

Over the course of five to eight weeks, the spittlebug nymph will coat its entire body in an viscous, bubbly mound, and then emerge as an adult froghopper, as they’re known, with enlarged hind legs that help it jump very, very far. But while it’s still a nymph, it breathes through the bubble masses by snorkeling with the tip of its abdomen, according to The New York Times. And if you startle a baby spittlebug, it will retreat deeper into its foam nest and stop breathing until the threat passes. Such is life on the edge.

When baby spittlebugs swarm, they produce monumental gobs of protective spit. In one of Harkin’s recent surveys, she saw a tree that was covered in so much spit that it looked like an explosion in a shaving cream factory. Every so often, she heard a gentle plopping sound as a clump of weighty spittle would slide off a branch and fall to the ground.

Though spittlebugs will certainly sit on many plants, they do have rather refined tastes. Forty percent of the recorded spittlebugs were spotted on lavender, 12 percent on rosemary, and 4 percent on rose bushes. Fittingly, some of Britain’s most discerning celebrities are on the lookout for spittlebugs. “Preventing Xylella’s spread is a priority and something that U.K. holidaymakers can support by simply avoiding bringing plants back from abroad that may be harboring the bacterium,” Dame Helen Mirren told the BBC.

If Xylella does eventually make it to Britain, the losses to crops, gardens, and even forests could be devastating. Prior outbreaks of the bacterium in Europe have led to the collapse of crops crucial to the British economy: grapes, alfalfa, peach, plum, almond, elm, sycamore, oak, maple, and citrus, Harkin says. And if it is spotted, proper quarantine protocol dictates that farmers have to destroy any potential hosts within a 328-foot radius of patient zero.

For now, if you do see a spittlebug in Britain, leave the little buggers (and their spit) alone. The researchers want to clarify that their work should bring no harm to any of the 18 species of spittlebug that roam the countryside, disease-free. “Our work is purely precautionary at this stage, and the spittlebugs do not currently pose any threat in the U.K., ” Harkin says. “Neither the spittle nor the adult bugs present any risk to human health.”

Like adolescence—human or insectoid—spittle does not last forever. When juvenile spittlebugs molt into adults in summer, their moist nests crust up on their host plants. Though the spittle season is nearing its end, you can still submit your spittlebug/froghopper spottings.

But one last, crucial mystery remains. Spittlebugs are many things: wee nymphs that burrow into bubble nests when frightened, as well as potential bearers of the apocalypse for Britain’s flora. But are they cute or disgusting? Readers, we pose this question to you over on our forums.

The Quest to Revive the Bay Area's Fabled Doggie Diners

Can a War of the Wasps Save Hawai‘i’s Wiliwili Trees?

A new project emphasizes practical designs that may stave off desertification.
trees

A fast-spreading bacteria could cause an olive-oil apocalypse.
Video • AO Docs