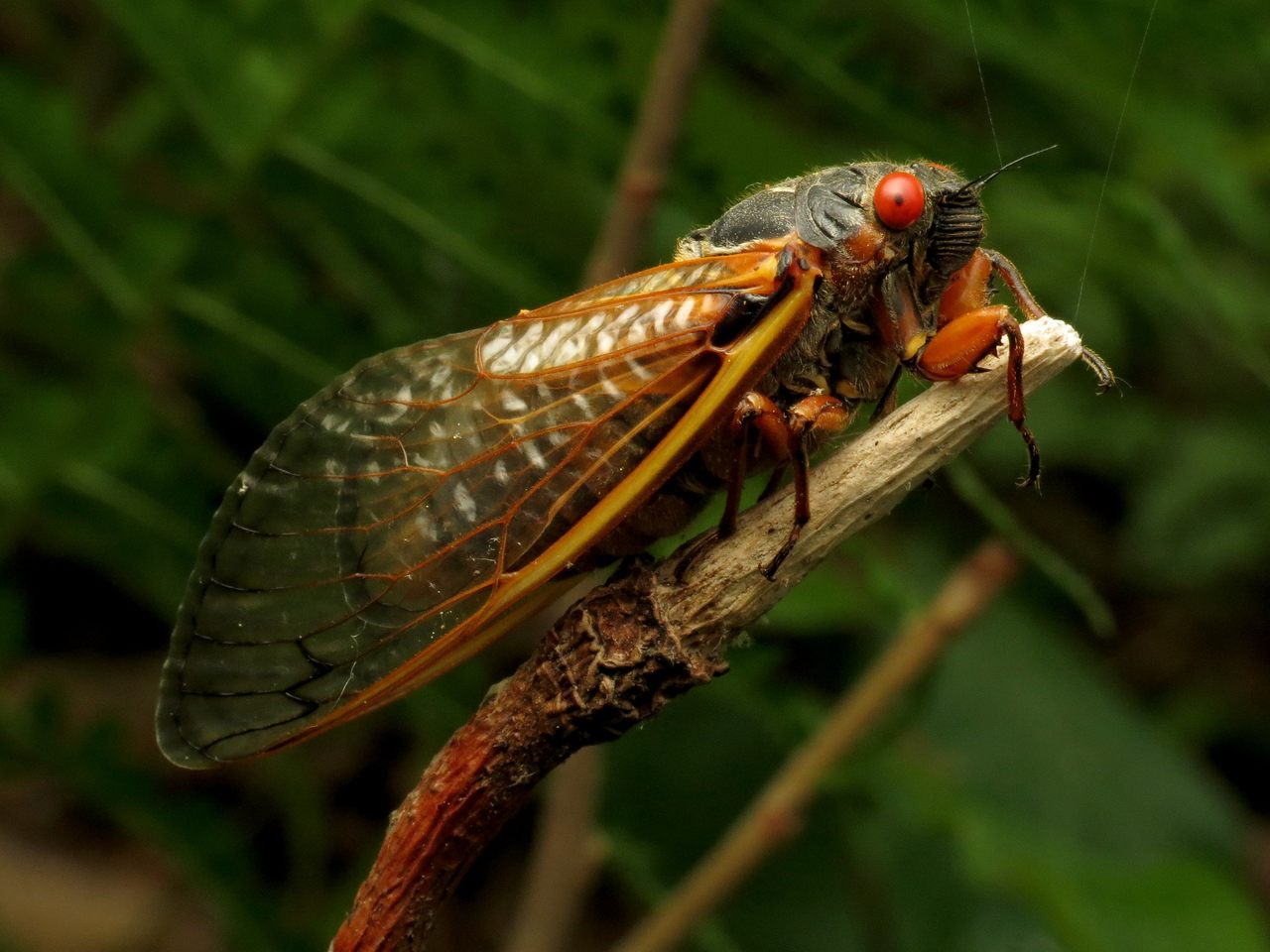 Every now and then, as daylight wanes in May or June in Ohio, the dim glow of a porch light might play tricks on you. At the margins of the beam, it may appear that the grass is waving. You might figure it’s just the wind, and most years, you’d probably be right. But other years, 2021 included, the swaying will be caused by insects—scads of them. When the cicadas of Brood X emerge from the soil after 17 years underground, explains Gene Kritsky, a biologist at Mount St. Joseph University in Cincinnati, they may seem to “climb up every blade of grass in the yard.”

There are several groups of so-called periodical cicadas that emerge en masse at regular intervals. Across the Midwestern, Southern, and Eastern United States, 15 different broods—each assigned a Roman numeral—emerge in 13- or 17-year increments. There are three species of 17-year cicadas—Magicicada septendecim, Magicicada cassini, and Magicicada septendecula—in most 17-year broods. Four species of cicadas crop up across the 13-year cycles. This year belongs to Brood X—which will emerge across a vast swath of the United States, from Illinois to Delaware—and, if you’re game for some scientific sleuthing, to you.

Following more than a decade of dining on plant juices underground, the cicadas are beckoned to the surface once the soil warms to 64 degrees Fahrenheit and is soaked by rain. When the big year comes around, nymphs depart by the tens of thousands. They clamber up trees, walls, cars, railings—whatever vertical surface they can find—and split themselves open and molt. Pasty-white, ruby-eyed adults free themselves from their old exoskeletons. Then, over the course of an hour and a half or so, they continue to transform: The new exoskeleton hardens and darkens, the shriveled wings straighten.

Suddenly, the insects are everywhere. In places where they’re densest, “cicadas drip from tree branches like trees heavy with fruit,” says Kevin Munroe, Long Island Preserves Director at The Nature Conservancy. A few days after busting out, males start to “sing” by vibrating membranes called tymbals on their abdomens. They’re hoping that females will flick their wings in response, indicating they’ve been wooed—but with so many males courting at once, Kritsky says, a tree can feel like “a giant cicada singles bar.” The insects are loud crooners. Kritsky has measured choruses reaching 96 decibels, comparable to a rattling subway. Pity the humans attempting to hold an outdoor conversation among a thick cluster. “You’re yelling at who you’re talking to,” Kritsky says. “Even after you go inside your car and close your door, your ears are still ringing.” Amid the din, the insects mate, lay eggs, and die. It’s a 17-year buildup to a brief party: The hullabaloo is over within about six weeks.

The cicadas venture out in such spectacular numbers, and across such a wide band, that there’s no way for an individual scientist or even a brigade of them to keep up. Scientists have long recruited laypeople to help survey the emergence. In the cicada realm, citizen science dates to at least the 1840s.

In 1843, entomologist Gideon B. Smith sent out letters to newspapers across the cicadas’ range, asking readers to drop him a note if they saw the insects. Writing about Smith’s legacy in an issue of American Entomologist, Kritsky reports that Smith initially set his sights on “prominent newspapers,” but that his requests were often reprinted in smaller outlets, too, including The Yazoo City Whig and Political Register in Mississippi. Kritsky calls Smith’s requests “one of the earliest known examples of collecting scientific data through crowdsourcing.” The USDA followed suit in 1902, sending 15,000 postcards of its own to ask people to write in with Brood X sightings. Insect-spotters seemed more than happy to oblige. In the late 1980s, Kritsky set up a cicada hotline, which quickly proved popular enough to jam up the answering machine. After switching to email, he says, he has at times received a message a minute throughout the workday.

Scientists still need more bug-gawkers. “There are a lot of questions we can pursue,” says DeAnna Beasley, an integrative ecologist at the University of Tennessee at Chattanooga. “It’s just a matter of having a lot of eyes out there making observations.” That’s where you come in. These are some of the questions that researchers hope to dig into when Brood X blankets parts of the American Midwest, South, and East Coast. If you live in one of the 15 states (or Washington, D.C.) about to be teeming with new, winged arrivals, you can help answer them.

How are temperatures affecting the timing of the emergence?

The cicadas have been showing up earlier than they did many decades ago, Kritsky says. In 2004, the cicadas arrived in earnest around May 16, compared to an average kickoff of May 28 prior to 1950. Since the 20th century, temperatures have been inching higher, and many areas now have many more roads, sidewalks, and other impervious surfaces that heat up more than open soil. That makes it tricky to predict the exact timing of the cicada bonanza, but it’s helpful to anticipate their arrival. Urban foresters, domestic green thumbs, and wedding planners all want insect ETAs, notes a research team led by University of Maryland entomologist Michael Raupp in a 2020 paper in The Maryland Entomologist. While “entomophiles will eagerly await the arrival of cicadas,” the authors write, a flood of bugs might not be the nuptial vibe a couple had in mind when dreaming of an early-summer ceremony. Landscapers may want to drape their fragile charges with netting or cheesecloth before the action begins, or shift the timing of planting young trees and shrubs. While mature trees don’t seem especially bothered by hordes of cicadas depositing eggs inside them, younger ones are vulnerable to splintered branches, fewer flowers, and other woes.

Raupp and his colleagues have already begun tracking the temperature, and relied on citizen science observations to do it. The 2020 paper draws on reports uploaded to the Cicada Safari app, which Kritsky designed with a team at Mount St. Joseph. The researchers paired user-submitted sightings—which include date, time, and location—with measurements from nearby weather stations. The data in their paper comes from 406 sightings made between April and June 2020, when some members of Brood X emerged a year early. (So-called stragglers, cicadas that arrive early or tardy, are not uncommon, Kritsky says. The current thinking is that the mix-up happens when a mild winter nudges trees to bud early and then temperatures plummet again before a full-fledged spring, “trick[ing] the cicadas into sensing that two years had passed,” Kritsky adds.) Upload your observations in 2021, when the bulk of the insects show up, and you’ll give the researchers a lot more to work with.

Where has Brood X shrunk, disappeared, or mingled with other broods?

When cicadas emerge as expected, the scene is spectacularly unsubtle. “They’re falling out of trees, they’re crawling up the side of your house, the tree is echoing with them,” says Munroe, of The Nature Conservancy. So, when the air is quiet in a place that was once drenched with droning, scientists want to know why. When Brood X emerged in 2004, not much happened on Long Island. “My understanding is that the last time there were substantial Brood X [sightings] on Long Island was 17 years before that,” Munroe says.

Munroe isn’t sure what happened to the cicadas that once called Long Island home—typically, cicadas vanish when their host trees disappear, or when their habitat is damaged by severe weather. But Munroe hopes that in 2021, humans will canvass parks, nature preserves, and other green spaces to look for any that hung on. “It’ll be like a treasure hunt,” he says.

Scientists are also asking whether this emergence will coincide with wayward individuals from other broods. Cicadas that are out of sync with the rest of their brood will probably be “patchy and scattered,” according to John Cooley of the University of Connecticut. Submitting sightings and audio recordings can help scientists distinguish between different broods and species. You can upload your sightings to Cicada Safari or iNaturalist, which now allows users to capture sound.

How do cicadas affect other species?

In Indiana, researchers are keeping an eye on the relationship between the cicada boom and the survival of wild turkey poults. The birds leave the nest within 24 hours of hatching, and have to scrounge for invertebrates. Cicadas help a lot: When they’re around, the birds don’t have to travel far to feast. That’s great, because the youngsters are extremely vulnerable to predators—biologists expect a 50 percent mortality rate within the first few weeks of the birds’ life.

In years when cicadas emerge (and especially in years with gentle weather during the hatch), “you’re going to have more poults entering the fall,” says Steven Backs, a wildlife research biologist with the Indiana Division of Fish and Wildlife. But the problem is that the wild turkeys aren’t the only creatures thriving with the extra snacks—predators do, too. Even if more poults survive this year, their ranks may be thinned by more predators next year. “We may have a kind of stock-market correction in 2022,” Backs says. “There’s going to be a heck of a lot more raccoons, possums, skunks, and other stuff running around.” You can help Backs and company get a baseline for this year by documenting hens and poults in July and August.

Since cicadas spend a lot of time surrounded by soil, some researchers are keen to know whether their bodies contain traces of pollutants known to linger there. Beasley, the integrative ecologist at University of Tennessee at Chattanooga, wants to know whether contaminants such as lead accumulate within the insects themselves. Along with her colleague Sean Richards, an environmental toxicologist, Beasley hopes to gather specimens from places with different industrial footprints. The researchers want to “capture some sort of gradient—hopefully some individuals outside the city and maybe not exposed to those pollutants, and some individuals inside the urban center,” Beasley says.

To help the scientists probe this question, collect a couple dead cicadas. Write down where you found them, then pop them in the freezer for 24 hours, and swaddle them in paper towels to sop up any moisture. (You can find more information, as well as the mailing address, on the project website.) “We definitely depend on citizen scientists for projects like this,” Beasley says.