What a Buried Crater in Mexico Says About the Asteroid That Doomed the Dinosaurs - Atlas Obscura
Want to see fewer ads? Become a Member. 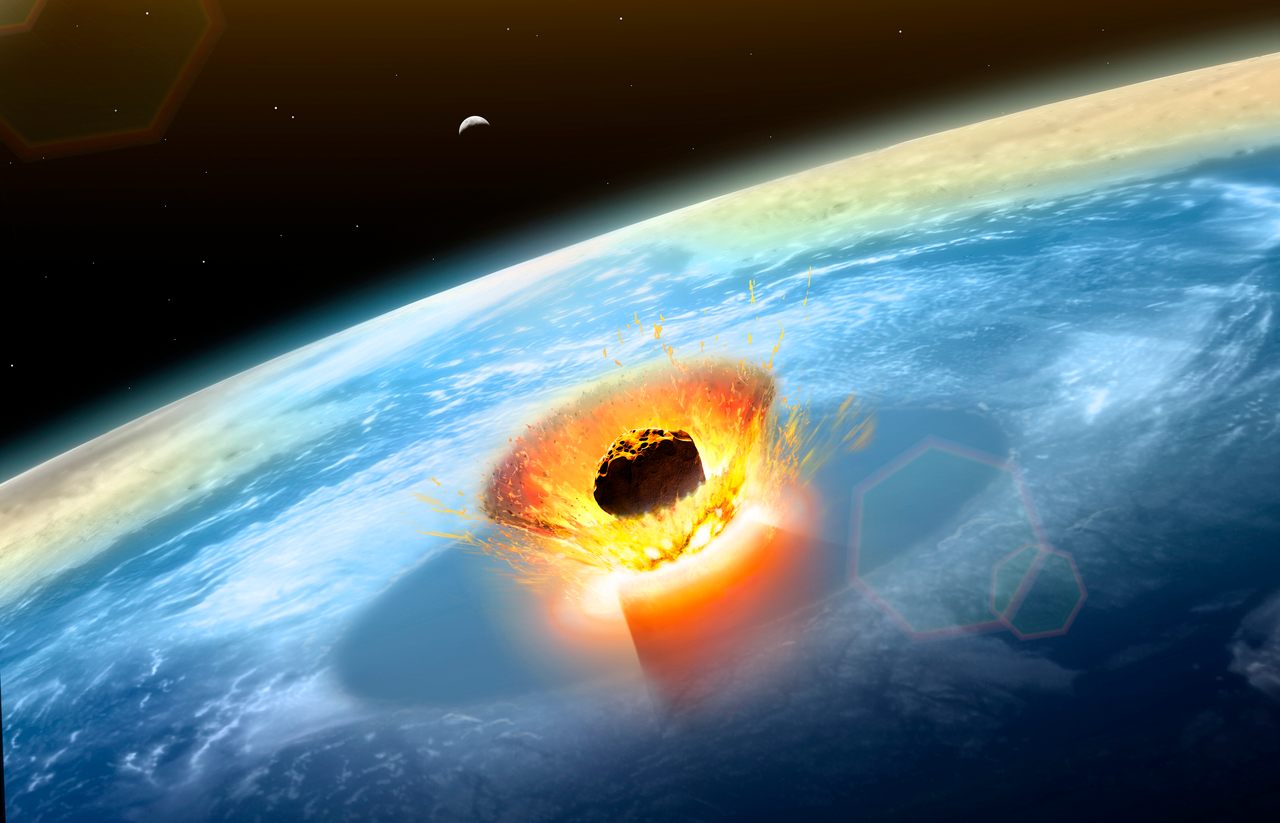 The asteroid that led to a mass extinction 66 million years ago likely struck the Earth at a very high speed—around 12.5 miles per second—and at the deadliest possible angle. MARK GARLICK / SCIENCE PHOTO LIBRARY / Getty Images
In This Story
Place

This 4,000-foot-diameter hole is touted as "the most well known, best preserved meteorite crater on Earth."
Destination Guide

Imagine standing on the edge of a giant crater, knowing nothing about how this massive hole in the ground came to be. Or figuring out that a cataclysmic event like an asteroid hitting the Earth killed the dinosaurs, but having no visible evidence on the planet of a collision of that magnitude.

Scientists and explorers have faced such puzzling moments in our history. They may have had inklings that giant collisions happened in the universe, but where and how and whether they still happened are things that modern scientists are only now able to answer with some degree of certainty. Until they started to, around the mid-20th century, craters like Arizona’s Meteor Crater and those on the moon were largely thought to be volcanic in origin.

Like detectives piecing together clues across time and space, scientists who study impact craters are revealing the stories of these fascinating planetary and lunar scars. Most recently, a new study on the Chicxulub crater in Mexico concludes that the asteroid that led to the dinosaur-ending mass extinction 66 million years ago likely struck at a steep angle and high speed that maximized the lethal effects that followed.

Computer simulations in the study, published in the journal Nature Communications, show the impact blowing open a hole some 19 miles deep and 50 miles wide in the Earth’s crust, which quickly rebounded upward into a mountain of rock higher than Mount Everest before collapsing into the crater formation that remains today—all within about 15 minutes.

The speed with which the crater formed is “one of the most awe-inspiring aspects of all this,” says Gareth Collins, the study’s lead author and a professor of planetary science at Imperial College London. “The asteroid was moving astonishingly quickly—probably around 20 kilometers [nearly 12.5 miles] a second—when it struck. That’s about 100 times the speed of a jumbo jet.” (It’s also, perhaps unnervingly, a common speed for asteroids that have pummeled our planet.)

Incredibly, the crater (or what’s left of it) can’t be seen on the Earth’s surface: It’s now buried about two-thirds of a mile beneath the Yucatán Peninsula. The team of researchers, from more than a dozen countries, compared 3-D simulations of different hypothetical impact angles and speeds with geophysical observations of Chicxulub that enable them to interpret features of the crater beneath the Earth’s surface.

The results suggest an asteroid trajectory that was particularly deadly. The catastrophic visitor, thought to be about 7.5 miles across, struck at an angle of around 60 degrees to the horizon in what was seawater at the time, says Collins, triggering a tsunami and unleashing a massive amount of debris and climate-changing gases into the upper atmosphere. The prolonged period of cooling and choked-off sunlight that followed wiped out much of life on the planet.

As Chicxulub demonstrates, impact craters offer extraordinary evidence of dramatic events that define the landscapes—and even the state of life—we observe today. In a sense, crater investigators like Collins have to work backwards to figure out the narratives behind these mighty geologic imprints.

The tale of Arizona’s Meteor Crater is particularly instrumental in how we’ve come to understand the very existence of impact craters. A popular tourist destination that was once a mining site and training ground for astronauts, the Barringer Meteorite Crater, as it’s known to scientists, is thought to be 50,000 years old and stretches three-quarters of a mile across.

“Planetary scientists make pilgrimages to Meteor Crater because it’s so exquisitely preserved,“ says David Kring, a geologist whose extensive work has spanned the Barringer, Chicxulub, and lunar craters. “It is considered to be the first proven impact site by the scientific community.”

Trying to prove that an object from outer space created it, however, cost the crater’s namesake, Daniel Moreau Barringer, his mining fortune and caused a scientific stir at the turn of the 20th century.

In 1896, G.K. Gilbert, then head of the U.S. Geological Survey, concluded that the depression was the result of a volcanic steam explosion. Meanwhile, Barringer—a Princeton-educated mining engineer and self-taught geologist—pushed his theory about a meteoritic impact in papers he published in 1905 and 1910. He cited, among other things, meteoritic iron found both beneath the crater floor and scattered in a concentric ring around the crater, plus inverted layers of rock—an indication that material in the hole had been thrown out and then landed upside down following the impact.

Granted, Barringer bought the site in hopes of making money selling pieces of meteorite metal. But he ended up unable to find the enormous extraterrestrial object that he thought still lay beneath the crater. “Barringer was understandably fooled,” says Kring. “He got the impact origin completely right, but he didn’t appreciate how much of the impact object was destroyed.” (Scientists now know that asteroids are largely melted and vaporized during a crash.)

Kring notes that Barringer’s theory wasn’t widely accepted until around 1960, when work by Gene Shoemaker, co-discoverer of the Shoemaker-Levy 9 comet, helped validate his ideas. During Barringer’s time, the notion that catastrophic events still happened was a paradigm shift from what was then the prevailing school of thought, known as uniformitarianism. A fundamental principle of modern geology, it says that Earth’s geologic processes have been consistent and slow-moving throughout the past and present.

The philosophical resistance that Barringer encountered continued well into the 20th century, says Kring. The theory that lunar craters were created by asteroid impacts, he notes, remained a minority belief until the Apollo missions to the moon returned with lunar rocks exhibiting radical alterations that only shock pressures and extreme heat from impact events—not volcanic ones—can cause.

“With Apollo, people grudgingly accepted the idea there were impact processes—but only in the past,” says Kring. “It wasn’t until the Shoemaker-Levy comet hit Jupiter, in 1994, that people realized that oh, this can still happen.”

Kring—who in 1991 identified Chicxulub as the site of the dinosaur-extinction event first theorized a decade earlier—says that one need only look to the moon to see what the asteroid impact looked like before it became buried and degraded, like many of the approximately 200 impact craters known on Earth.

The moon’s nearly 200-mile-wide Schrödinger basin is a virtual twin of the Chicxulub crater, only bigger, notes Kring. They are so similar, in fact, that Kring and Collins, in a 2016 study with other researchers, used Schrödinger’s exposed features to better understand what transpired at Chicxulub.

Looking at impact craters on Earth and other bodies in the solar system, it turns out, go hand in hand. “On other planets, we get a better picture of what a pristine crater looks like, but we only see the surface,” says Collins. “On Earth, we rarely see the surface because there’s so much activity and erosion. But through geophysical and geological mapping and drilling we can learn about what’s beneath the surface. By putting those two observations together, we get a more complete picture of what a crater is and how it forms.”

The knowledge unlocked by studying impact craters goes even further—potentially to the origin of life on Earth itself. According to Kring, the Schrödinger basin is a high priority for exploration in future moon missions—a way to shed light on questions that include whether an intense period of bombardment in the early solar system may have seeded life on our planet.

“Those are really big questions,” he says. “Not just about lunar geology, but questions that reverberate across the entire solar system.”

The third episode of TED’s Far Flung podcast was 66 million years in the making.
meteorites

For this community of “space cowboys,” entrepreneurs, and enthusiasts, a fireball streaming across the sky offers big risks and bigger rewards—and new tech is heating up the competition.
meteorites

1:34
Sponsored by Visit St. Pete/Clearwater
Want to see fewer ads? Become a Member.
From Around the Web
Atlas Obscura Trips
Oaxaca: Tastes of Past & Present
View This Trip
Thanks for sharing!