How a Big Slab of Butter Becomes a Masterpiece - Gastro Obscura
Want to see fewer ads? Become a Member. 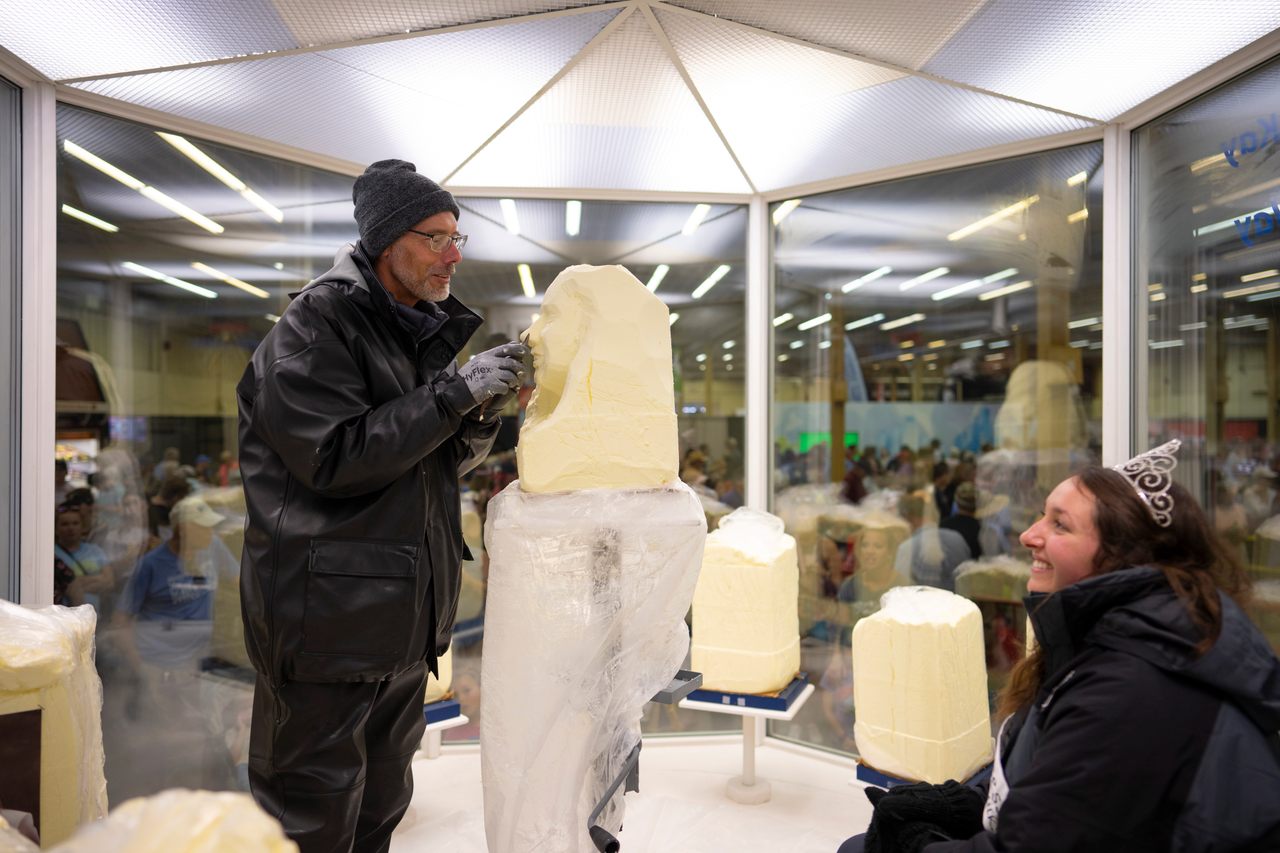 This article is adapted from the September 10, 2022, edition of Gastro Obscura’s Favorite Things newsletter. You can sign up here.

Last week I found myself standing in front of a large glass case containing priceless pieces of art. The sculptures depicted women’s faces, with long hair framing round cheeks and big smiles. As I admired the artist’s work, my reverie was interrupted by a server barking out orders for malts and ice cream cones.

The Louvre this was not. It was the Dairy Building at the Minnesota State Fair. Sure, the Louvre may have the Mona Lisa, but the fair has butter sculptures.

While making busts of butter might sound like a modern gimmick, the tradition of butter art goes back centuries. From the gorgeous, colored New Year’s sculptures of Tibet to the intricately molded animals and flowers of 18th-century Pennsylvania, the Minnesota event is part of a long line of artful churned dairy.

This week we’re looking at some of the world’s best butter-based art. In the right hands, a humble block of butter can be transformed into everything from a life-size cow to a colorful dragon.

1) Princess Kay of the Milky Way

There are other events that celebrate butter sculptures, but few rival the spectacle of the Minnesota State Fair. The artist, Gerry Kulzer, live-sculpts each model in a refrigerated glass chamber so fairgoers can watch as he transforms a 90-pound block into a human form.

The “butter booth” is the culmination of a contest in which young workers in the local dairy industry compete for a chance to be Midwest Dairy’s official ambassador for the coming year. Only one winner can be crowned “Princess Kay of the Milky Way,” but all the finalists get their likenesses sculpted in the booth—and get to keep the results.

During the fair, each completed butter bust graces a rotating ring inside the refrigerated chamber, allowing the crowd to admire the finished art as well as the work in progress.

While the cow reigns supreme in the United States, most of the butter in Tibet comes from yaks. During Tibetan New Year festivities, also known as Losar, sculptors tint their butter with pigments then shape it into animals, flowers, and symbols such as the dharma wheel.

The sculptures are a highlight of the New Year’s Butter Lamp Festival. Along with yak butter–fueled candles, the art celebrates the enlightening power of Buddhism and the beauty of impermanence. Like a snuffed-out flame, even the most intricate masterpiece will eventually be melted down or fed to animals.

A fair fixture since 1911, each year’s heifer starts with 600 pounds of pure-cream Iowa butter. An artist then applies layers of the butter to a frame made from wood, metal, wire, and steel.

To keep things fresh, the fair often pairs the cow with another sculpture that honors a fair tradition or piece of pop culture. Last year’s companion sculpture was a tribute to the fair’s giant slide, but others have included Sesame Street characters, Neil Armstrong, and Elvis Presley.

For 50 years, a queen reigned over the state fair’s butter booth: sculptor Linda Christensen. When Christensen announced her retirement in 2020, she started training Gerry Kulzer, a local sculptor and art teacher, as her replacement.

This year is the first time Kulzer has sculpted at the fair solo. We chatted with him about what goes into sculpting butter, what it’s like to take such an important mantle, and what the finalists do with their butter busts once the fair’s over.

How did you become the fair’s butter sculptor?
Way back, I saw Linda Christensen sculpt, and that was the only place, besides knocking on someone’s door and saying, “Hey, can I visit your studio?” where you had a publicly accessible sculptor.

It was fun to watch and I thought, “I think I can do this.” So I contacted Midwest Dairy and said, “Hey, if she ever retires, maybe think of me.”

Years later, they got back to me. They gave me a 90-pound block of butter, some photographs of one of the Midwest dairy workers, and said, “See what you can do.” So I sculpted my first block as an audition for the position. They liked what they saw, and the rest is history.

What tools do you use?
When we were working together, she [Christensen] said, “Get a nice butcher knife. You’re going to need that.” But last year, she handed me hers, “Old Faithful.” It was like passing the baton, passing the butter knife.

I use a wood knife for the small details, but I do use her knife every time to block it out. I had her sign a piece of leather and I just made a little sheath for it. So when I’m not using it, I can put it in there and safely store it. I love it. It is a treasure.

What’s it like sculpting something that you know will somehow be used and eventually destroyed?
All pottery is meant to be used. So use it. Drink out of it. Eat off the plate. Use that pottery. It’s the same with the butter here, I think. It’s butter. Let’s use it. Take that and use it for what it’s meant for.

In This Moon Landing, Everything Is Made of Butter

The artists need cold fingers and plenty of patience.
cake

The All-American Appeal of the Bundt Cake

A clever pan made elegant baking possible for everyone.
women

Meet the Woman Who Trekked a 1,200-Mile Ice Age Trail in the Dead of Winter

An abandoned fish-shaped drive-in gets a second life as a restaurant.
Minneapolis, Minnesota

This French Canadian classic is a specialty of the oldest continually used church in Minneapolis.
Want to see fewer ads? Become a Member.
From Around the Web
THE GASTRO OBSCURA BOOK
Taste the World!
An eye-opening journey through the history, culture, and places of the culinary world. Order Now