In This Moon Landing, Everything Is Made of Butter - Gastro Obscura
Want to see fewer ads? Become a Member. 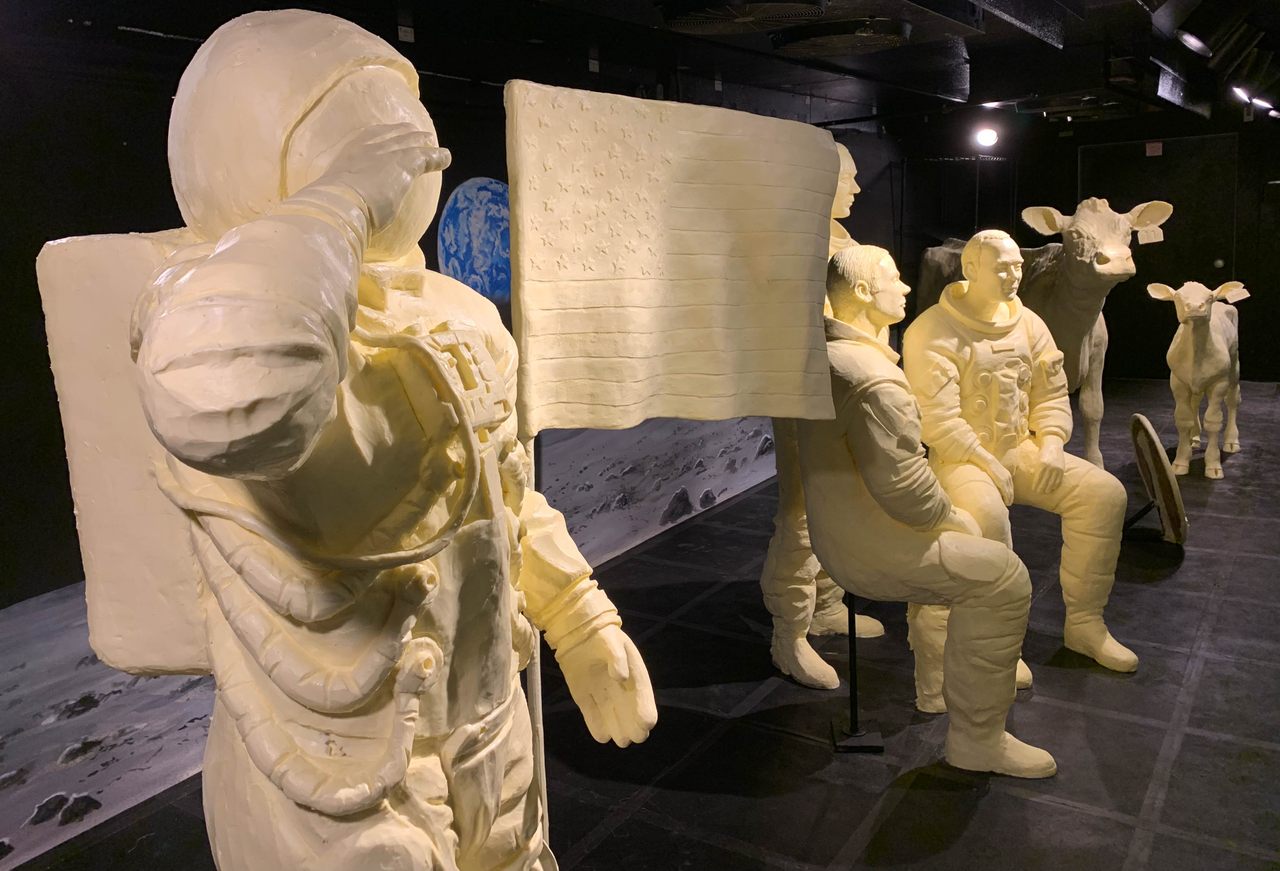 These dairy-based sculptures have been state fair traditions for more than a century.
Destination Guide

The moon may not be made out of cheese, but some astronauts are, in fact, made out of butter.

In a sculpture not for the lactose-intolerant, several members of the historic Apollo 11 crew—commander Neil Armstrong, lunar module pilot Buzz Aldrin, and command module pilot Michael Collins—are rendered in ephemeral dairy yellow at this year’s Ohio State Fair. The life-size renditions, composed of more than a ton of exquisitely molded butter, are in place to help celebrate the 50th anniversary of the moon landing.

The theme of this year’s sculpture, unveiled on July 23, was set in stone, er, butter last year. Armstrong, born in Wapakoneta, Ohio, is one of the state’s most famous natives. “We’re always looking for good Ohio anniversaries,” says lead butter sculptor Paul Brooke. “And this is one of the strongest ones we’ve ever had.”

The full display depicts a kind of montage of the historic July 1969 mission, when humans took their first steps on the moon. On the left, there’s a butter sculpture of Armstrong in his space suit, standing next to the lunar module Eagle and saluting an American flag that ripples almost surreally (considering that it’s made of firm, refrigerated butter). In the center, renditions of Armstrong, Aldrin, and Collins sit with their helmets off. The more traditional subjects depicted in the butter sculpture—a cow and calf—get in on the Apollo action too: Each sports ear tags marked with “Apollo” and “11,” respectively.

Before they started sculpting, Brooke and his partner, Alex Balz, spent 100 hours planning, gathering photographs of what they saw as the most iconic shots of the Apollo 11 mission. Then they welded the skeletons for each figure using black iron pipe. “[The pieces] screw together pretty easily,” Brooke says. “A 10-inch piece of pipe is great for an upper arm.”

Once the skeletons were complete, it was butter time—2,200 pounds of butter in total, courtesy of the Dairy Farmers of America. The material arrived in 40 55-pound boxes, each slightly past its expiration date. The sculptors then left the butter out for three days, so it could soften enough to be molded by hand.

Once the butter was pliable, Brooke, Balz, and four other sculptors worked for 400 hours in a 46-degree cooler. They carried in the softened butter from another room, then quickly globbed it onto the black iron pipe frames before it could harden.

But butter-sculpting is a delicate art—and one that can’t be rushed. “You can’t put too much [of the butter] on at once, especially in the belly of the cow,” says Brooke. To do otherwise would result in 100 pounds of carefully molded butter thudding onto the floor.

Brooke says he’s made it four or five years without a major butter mishap. His last one involved a sculpture of the Cleveland Cavaliers’ mascot, which suffered an unfortunate crack and required a last-minute trip to Columbus for extra butter.

Making the state fair sculptures required some physical ingenuity as well. When six people gather in a small, cold room to mold Neil Armstrong’s face out of dairy, it’s a real game of Twister. ““We were constantly leaning over other people or reaching around to sculpt a guy’s face,” says Brooke.

Luckily, each of the Ohio-based sculptors has an area of expertise. Balz, a plumber by trade, is the face and anatomy guy. Dairy farmer Matt Davidson handled the cow. West Chester resident Tammy Buerk worked on the calf. And Columbus resident Erin Swearingen, who loves detail work, crafted the Apollo 11 logo. The team also had an intern: Karen Tharp, who’s pursuing an MFA at Ohio State University, helped detail the spacesuits.

Brooke says parts of the sculpture were harder to make than you might think. The American flag, for example, created a lot of what Brooke calls “engineering problems.” Turns out, it’s hard to hold up a hefty sheet of seemingly rippling butter with only a thin flagpole (also, of course, made of butter). Brooke says had to solve such dilemmas by strengthening the frame to ensure that the flag wouldn’t fall over.

But these sculptures don’t just celebrate the anniversary of the moon landing. They also commemorate Brooke and Balz’s 20th year together as lead butter sculptors at the Ohio State Fair. Their past masterpieces have depicted, among other things, the Liberty Bell, the 90th anniversary of the ice-cream cone, and the robotic toy Furby.

“Butter sculptors are not easy to find,” says Jenny Hubble, senior vice president of communications for the American Dairy Association Mideast, which sponsors the butter display. “All our sculptors have fine-art degrees.”

These works of dairy art will stand tall and creamy in the 46-degree room until August 4. When the Apollo scene is dismantled, the butter will be recycled and refined into an ingredient that’s used in animal feed, biodiesel, tires, and cosmetics.

Call it one small step for butter, one giant leap for the expired-butter industry.

How a Big Block of Butter Becomes a Masterpiece

Inside the centuries-old art of transforming butter into dragons, cows, and princesses.
objects of intrigue

Austin Just Sent Its Favorite Queso Recipe to the Moon

And it's sitting on the shelves at several university libraries.
Video

The headquarters of a pioneering cast iron and cast aluminum cookware company is in ruins, but still standing.
Toledo, Ohio

This spectacular public market has got meat, fish, vegetables, baked goods, and enough kielbasa for a lifetime.
Cincinnati, Ohio

The inventor of the iconic Pringles can was so proud of his invention he was buried in one.
Want to see fewer ads? Become a Member.
From Around the Web
THE GASTRO OBSCURA BOOK
Taste the World!
An eye-opening journey through the history, culture, and places of the culinary world. Order Now