There Is Just One Sculpture on the Moon - Atlas Obscura 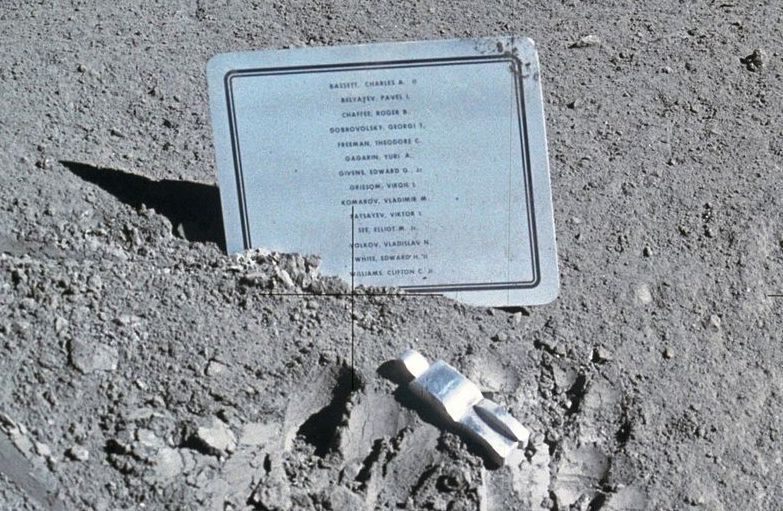 Across the many missions to the Moon over the years, countless bits of flotsam and jetsam have been deposited on the lunar surface. From Soviet sensors to a couple of golf balls, there are roughly 800 manmade objects up there. There is, however, one of them that’s different than the others. In 1971, the crew of Apollo 15 left a piece of aluminum, 3.3 inches long, on the lunar surface. It is called Fallen Astronaut, and it is the first (and only) art installation on our closest neighbor. (The Moon Museum, a ceramic wafer etched with drawings by Andy Warhol, Robert Rauschenberg, and others may or not have been snuck aboard Apollo 12.)

In her book Artifacts of Flight, NASA art curator Carolyn Russo writes: “On Apollo 15, the fourth mission to land on the Moon, astronauts David Scott and James Irwin left a memorial on the lunar surface as a tribute to the heroic men of the U.S. and Soviet space programs who had risked and lost their lives.” This small memorial figure, fittingly Space Age in design, was created by Belgian artist Paul Van Hoeydonck. “As the final act of the third extravehicular activity on August 2, 1971, they placed a sculpture depicting a ‘fallen astronaut’ in the lunar soil at the Hadley-Apennine landing site,” Russo writes.

The figurine was placed without fanfare—in fact the public wasn’t even told it was up there until the launch of Apollo 16 almost a year later. It rests in an open grave of moon dust alongside a plaque bearing the names of 14 men, Soviet and American, who died in the course of their respective nations’ space programs, including Gus Grissom and Yuri Gagarin. Notably, three names are missing: two cosmonauts whose deaths were obscured by the secrecy of the Soviet space program, and Robert Henry Lawrence Jr., who had been trained to be the first black American astronaut and died in a training flight. That said, Fallen Astronaut was designed to be ethnic-, race-, and gender-neutral. The sculpture was also designed to be lightweight enough for easy transit, but sturdy enough to stay put on the celestial body it calls home.

Thanks to the ability of aluminum to weather the Moon’s extreme temperature swings and abrasive dust, the original sculpture is still there, intact. But it’s not the only version that exists. Van Hoeydonck crafted a replica that he donated to National Air and Space Museum in Washington, DC, in 1972.

Redditors Are Stapling Bread to Trees in Sheffield, England

Help us keep them coming by directly supporting Atlas Obscura.
Become a Member
$5/month $10/month $20/month
See All Membership Options
Already a part of our membership program? Sign in.
No Thanks
Keep Exploring
space exploration

The blastoff this week on a SpaceX rocket—the first ever private launch—could be a big step toward commercial space travel.
objects of intrigue

"Insurance covers" were meant to provide for their families in the event of disaster.
space exploration

When NASA Wasn't Sure if Astronauts Could Swallow in Space

Exit Interview: Scott Kelly, an Astronaut Who Spent a Year in Space

It's very easy to lose things on the International Space Station.
Video • Object of Intrigue

The auction commemorates the 50th anniversary of the Apollo 11 moon landing.
Read more