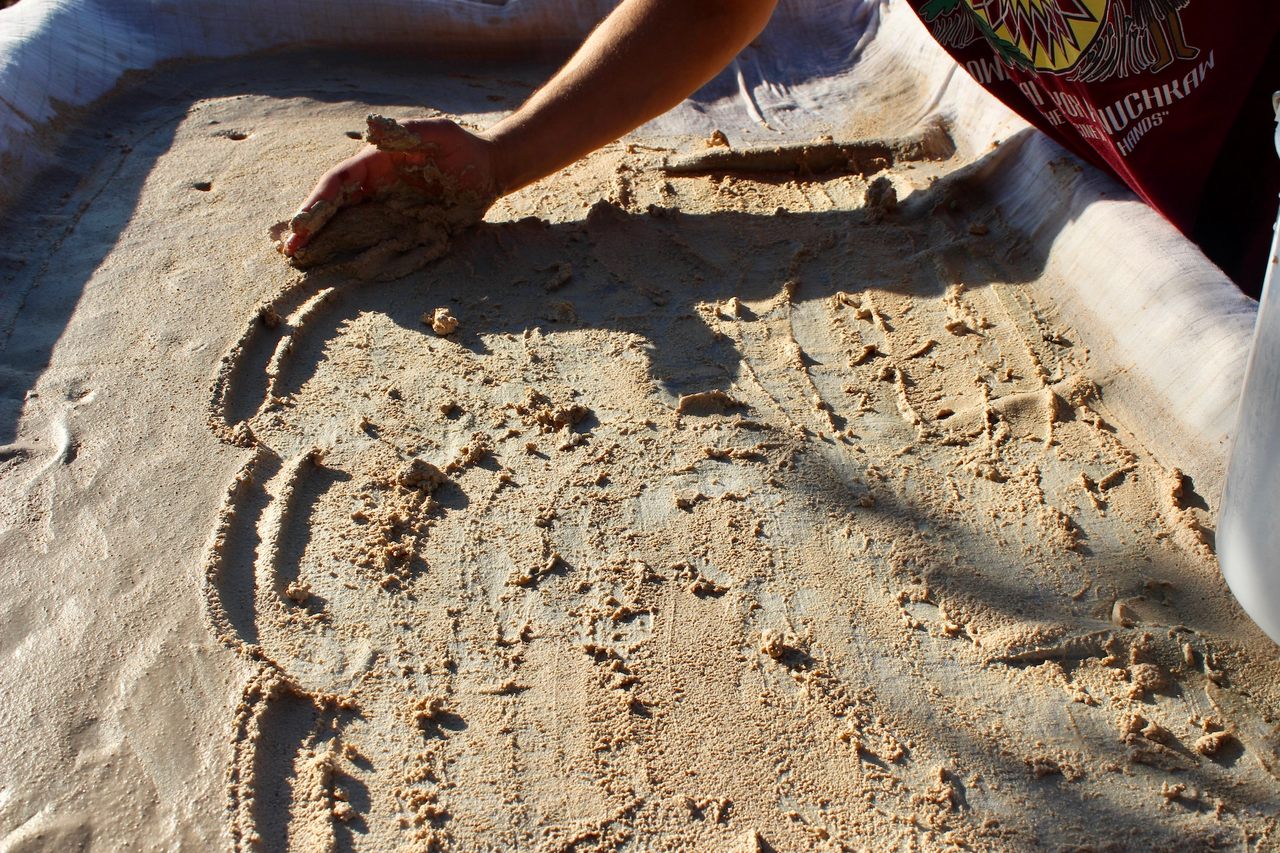 Making acorn mush is a laborious process. All images courtesy of Arrow Sample
In This Story
Place

This restaurant features Native American foods from across the country.
Destination Guide

That an acorn, given water and time, will grow into an oak tree is a well-known fact. Fewer know, though, that acorns can also be made into a delicious meal. Arrow Sample, founder of Arrow’s Native Foods, is working to change that.

Sample identifies as Mono/Yokut and is an enrolled tribal member of the Big Sandy Rancheria Band of Western Mono Indians. Growing up in the Central California foothills between Fresno and the Sierra Nevada Mountains, it was not until adulthood that Sample first learned that the region’s towering oak trees had once provided a staple food for his tribe.

As Spanish missionaries and settlers claimed Californian land and the U.S. government instituted boarding schools for Indigenous youth, acorns slowly ceased to be a part of the local diet. “My ancestors were made to forget many of their ways and then rely on the government for assistance when we could no longer sustain ourselves,” Sample explains.

His own connection to acorns had been almost entirely lost until his father retired. Several years ago, Brian Sample began regularly returning home with buckets full of acorns. It was a time of reconnection and rediscovery as he sought to remember how his grandmothers and aunts had gathered and cooked acorns in his youth.

Like his father, Sample was experiencing a point of transition in his life. After graduating college with a business degree and serving two terms on his tribe’s Tribal Council, he took on the role of caretaker for his first child, then his second child and, eventually, an ailing great-uncle. While caring for his family, he cooked with his father at tribal events.

The duo initially served only Indian tacos. But Sample and his fiancée Rochelle Bonillas soon saw an opportunity to expand the menu, while also restoring their tribe’s oldest traditions. In 2019, Sample and Bonillas founded Arrow’s Native Foods, with the goal of making ancestral ingredients more readily available. Their focus would be one dish of particular historical and cultural importance: acorn mush.

The recipe for acorn mush consists of just acorn flour and water, but its preparation varies between tribes. Sample describes his version as having a pudding-like consistency, while in Northern California, the texture may be closer to soup. The flavor also differs from place to place based on the variety of local acorns. “For my tribe, the premium product is from the black oak tree,” says Sample.

The harvest begins in the fall, when the majority of acorns drop from the trees. Sample avoids any that have been hollowed out by bugs, and stores the good ones with bay leaves and buckeyes, which act as natural insect and rodent deterrents.

Sample shells the acorns as needed throughout the year. Their soft interiors, once ground into a powder, must be leached—a process that involves soaking the powder in water for several hours, removing the bitter flavors.

In the past, the acorn flour would be spread on a hot rock in the sun to dehydrate naturally. Last winter, Sample was the first person in generations to perform this practice in his community, but he generally uses a dehydrator for efficiency. After drying, the acorn flour is ready to be mixed with water to form a dough that is cooked and chilled to form nutty acorn mush.

The long and laborious process, from gathering the acorns to finally serving the dish, requires patience and physical stamina, which may have something to do with the rarity of acorns on the dinner table in recent history. “Unfortunately, like for so many of our traditional foods, it’s one that’s been dwindling little by little,” says Sample. He associates the loss of traditional foods—including acorns, which are packed with vitamins and minerals—with the rise of health issues in Native American communities today.

When Sample first served acorn mush at his tribe’s pow wow in 2019, it was received with so much enthusiasm that he was invited to prepare it at tribal gatherings across California. The onset of the Covid-19 pandemic just a few months later, however, resulted in the cancellation of all events. Driven by the desire to continue serving his community, Sample set up a food stand outside his tribal offices. He was surprised at how far people would travel to have a plate of acorn mush.

Restrictions on gatherings have since been lifted, but Sample’s ability to make acorn mush remains limited by several factors, including climate change. “For the past seven, maybe eight years, the acorn harvest hasn’t been as productive in our general area,” he says, citing drought as one of the potential causes. One year the acorns were so scarce that Arrow’s Native Foods exhausted their supply in just a few months. Sample began to research where black oak trees grow across the state. When autumn came, Sample drove as far as six hours looking for acorns, often relying on advice from helpful strangers and other tribes who knew where they were abundant.

Then, in the autumn of 2020, the Creek Fire blazed through Central California. “It wiped out almost our whole Sierra National Forest and big parts of some of our regular gathering areas,” says Sample. For now, Sample will have to continue traveling far afield to gather acorns each season.

Sample serves the majority of his acorns at events. Because of the work it takes to process what he can gather, he intends to keep sales of acorn-based products limited to what he and his family can sustainably produce for their community. Sample only has one commercial customer for his acorns: Wahpepah’s Kitchen, a restaurant in Oakland, California, that sources primarily from Indigenous producers for a menu drawing on various Native American culinary traditions. There, his acorn flour is used in chocolate-chip cookies and crêpes.

Though Sample likes to see the acorns used in new ways and enjoyed by non-Natives, “my main goal is serving my people with our traditional foods,” he says. Sample hopes to increase access to such foods in other Native communities, too, and now leads educational courses on gathering, storing, processing, and cooking acorns. At the same time, his children are learning how to make acorn mush, passing on this historic and vital tradition.

Conservationists should look to Indigenous history to fix the future.
restaurants

A state-spanning network of volunteers powers the program.
Video • Wonder From Home