Why American Kids Have Been Going to Soviet Sleepaway Camp - Atlas Obscura
Want to see fewer ads? Become a Member. 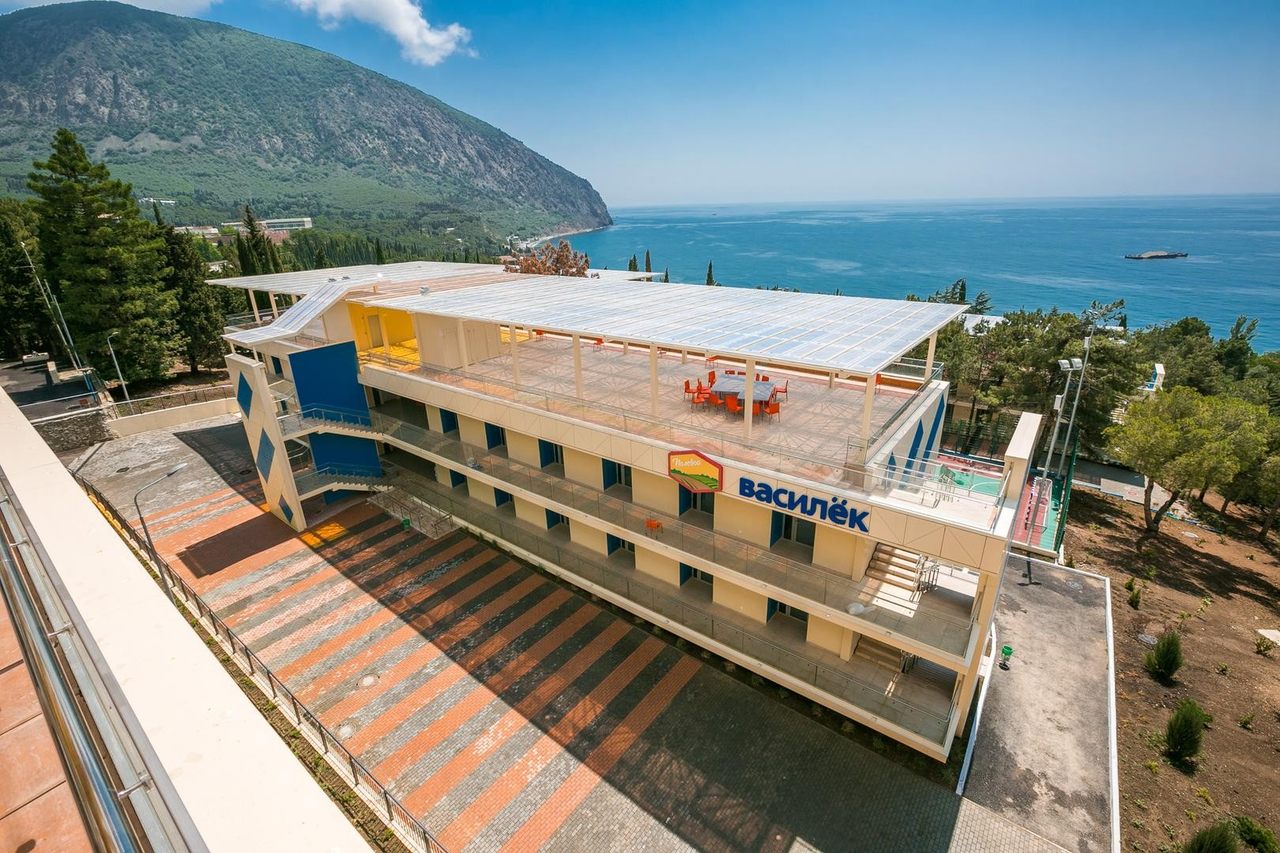 Like thousands of kids across the globe, Anton Belaschenko went to sleepaway camp last summer. The 11-year-old from Bethesda, Maryland swam in the sea, went sailing, hiked in the mountains, and sang camp songs. He made new friends and ate “the most amazing pancakes in the world.”

He and his fellow campers weren’t roughing it: their camp has multiple swimming pools and tennis courts, film and music studios, a fleet of sailboats, computers and 3D printers, and an amphitheater that seats 7,000. Anton video-chatted on WhatsApp twice a day with his mom, Anna, because no 21st-century camp would be complete without Wi-Fi.

Anton’s camp, Artek, is more than just a place for kids to build self-confidence and hone outdoor skills. Founded in 1925, Artek was the first and most elite of the Soviet Young Pioneer camps, specialized summer camps for tweens and teens that once numbered in the thousands across the Eastern Bloc.

Stunningly situated in Crimea on 540 acres of the pebbled coast of the Black Sea, Artek was the exclusive summer destination for the children of the Soviet elite until 1956, when Soviet leader Nikita Khrushchev introduced an international session open to kids from around the world. Soon, Artek was hosting about 30,000 children every year. Some 1.5 million kids from more than 150 countries have camped there in the past near-century.

During the Cold War, the goal was to “kind of convert these children into peace activists of a Soviet-led world peace,” says Matthias Neumann, an associate professor in modern Russian history at the University of East Anglia in England.

The Soviet era may be long over, but Artek as an emblem of Russian influence is not. The camp fell on hard times in the 1990s, but since 2014, when Russia invaded Ukraine and annexed the Crimean Peninsula, Moscow has poured more than $200 million into its renovation.

“The buildings are new and shiny and beautiful,” says Elle Amant, founder of Artek Global, a U.S.-based nonprofit that promotes Artek and connects its Artekovsky, or camp alumni. Amant, a Metro-D.C. resident, brought Anton and nine other American kids to Artek this summer.

How did American kids wind up making campfires in the Soviet Union during the height of the Cold War?

Neumann learned about the American Artekovsky in 2013 when he came across a few folders labeled Artek in the archives of the National Council of American-Soviet Friendship (NCASF). The New York–based organization was founded in 1943 to foster peace between the superpowers through cultural exchange programs. One program was camping at Artek.

The name jumped out at him. “Everyone growing up in the Eastern Bloc would have heard that name,” he says. “I was born in East Germany, and I was a young pioneer myself until the age of 12.” That was 1989, the year the Berlin Wall came down.

The folders held applications to Artek from adolescents across America. Among them were the children of socialists, communists, idealistic peace activists, and progressives committed to racial and social justice. Many were African American, Latino, or Native American. A group from Anchorage, Alaska applied at the urging of their Russian-language teacher. Some learned about Artek through the YMCA, Boys & Girls Clubs of America, or the American-Indian Movement.

This surprising range was largely the work of NCASF director Kathy Rothschild, a progressive activist with no connection to the Communist movement, Neumann says.

The kids worked hard on their applications, highlighting their accolades. Competition to get into Artek was even fiercer within the USSR. “It was a very exclusive camp for elite kids,” says Amant, 34, who primarily grew up in Russia and the U.S. “The kids who won the competitions. Who were the best at ballet, in sports, in dance, in academics—or saved somebody’s life.” Amant was already writing articles for local newspapers in Crimea at age 10 when she first attended Artek.

“It’s like the Metropolitan Opera,” says Anna Belaschenko. “Everybody hears of it, but not everybody goes to it.” (She didn’t.)

As Neumann recounts in American Peace Child: Bridging the Cold War Divide in a Soviet Youth Camp, his book-in-progress, once the camp opened to foreign kids in the 1950s, it “was very about promoting a view of world affairs and foreign policy from Soviet eyes.” Official documents from the era say that after 15–20 days at Artek, campers should have adopted these views—and then taken them back home.

“They didn’t expect foreign children to be turned into Communists, but they should’ve formed a sympathetic view of the Soviet Union and of Soviet foreign policy,” Neumann says.

Daily life at Artek was a mix of sports, activities, and orchestrated political events. The American kids were sometimes confronted by children from Vietnam, Nicaragua, and other countries who said they’d experienced violence and loss due to U.S. foreign policy.

Some American kids were sympathetic, but others felt unfairly attacked, Neumann found when he interviewed about 50 camp alumni for American Peace Child. These alumni, now in their 40s–60s, include teachers, white- and blue-collar workers, felons, philanthropists, a prominent Greenpeace activist, and a California billionaire. (Neumann did not disclose their identities.)

Some Western governments viewed groups like the NCASF “as propaganda outlets and foreign policy outlets of the Soviet Union,” he says. NCASF landed twice on the Attorney General’s List of Subversive Organizations. “And to some extent they were important agencies for Soviet cultural diplomacy. But the people who were involved … were often very committed activists that were not necessarily interested in Soviet communism, but much more in peaceful relationships [between nations].”

Perhaps the only well-known American Artekovsky is Samantha Smith, who in 1982, at the age of 10, wrote a letter to Soviet leader Yuri Andropov expressing her fear of nuclear war and questioning why “you want to conquer the world or at least our country.” After the letter was published in Pravda, the official newspaper of the Soviet Union’s Communist Party, Andropov invited Smith to the USSR. Her highly publicized tour in 1983 included a stay at Artek, where she donned the Young Pioneers neckerchief and uniform.

On her return to the U.S., she became a cub reporter for the Disney Channel, interviewing Democratic candidates George McGovern and Jesse Jackson during the 1984 presidential campaign. Just one year later, Samantha Smith and her father died in a plane crash. Both Ronald Reagan and Mikhail Gorbachev, who had succeeded Andropov, sent their condolences to her mother, Jane, who soon after created the Samantha Smith Foundation. Like NCASF, the foundation sent kids to Artek. It also hosted Soviet campers in Maine, despite receiving threatening letters from American parents.

Smith is still a local hero at Artek. A tree-lined path near the Black Sea is named after her, its entrance marked by a large stone. This past summer, campers cooked her favorite Russian dish—chicken cutlet with mashed potatoes.

Today, 95 percent of the camp spots are reserved for high-achieving kids in Russia, who attend for free. The other 5 percent of spots can be won through merit-based competitions or purchased. The American families paid about $1,200 for 21 days. “Even if you pay, you have to prove to them that you are good at something,” Amant says. Kids are required to upload a portfolio to the Artek website, which is then scored.

The day at Artek begins at 8 a.m. with three “cheerful, happy” songs, Amant says: One to wake up to, one for getting dressed and brushing teeth, and one for making the bed and running downstairs for morning exercise. The camp still offers a mix of sports, activities and international events. A highlight for Anton was the International Fair, where kids from more than 70 countries set up tables filled with tchotchkes that visiting kids could win by correctly answering trivia. The American campers asked visitors questions like, “Who was the first president of the United States?” At the French table, Anton scored a French flag by naming two famous things about the country: the Eiffel Tower and “civil wars.”

Neumann visited Artek at the same time. He awoke at 4 a.m. to hike up Bear Mountain to watch the sunrise—an Artek tradition. He visited the on-site camp museum to see historical records. He interviewed staffers, some of whom have worked at the camp since Soviet times.

He also took Arteks’ political pulse. In comparison to the overt geopolitical maneuvering of the past, “I was struck by the absence of ideology,” he says. “There were lots of scout-like activities about team building, self-confidence, and discipline. The camp educators really care about the kids—and they like that lots of investment goes into it.”

It’s in the investment itself that the geopolitics lies. Russia’s $200 million upgrade of Artek is meant to “restore Artek’s reputation as the prime children’s camp in the Russian Federation, if not in the world,” Neumann says. “It kind of becomes this sacred space of an ideal Russian childhood.”

The Ukrainian government believes that’s the case. In a statement to UNESCO in April 2019, Ukraine condemned Russia’s “shameless use” of Artek to further its political and military agenda post annexation.

The Russians are also promoting Artek as a brand. Today it’s not the idea of Soviet-led world peace that campers are supposed to take home but Artek-labeled uniforms, T-shirts, and backpacks.

For Anton, Artek is simply a great summer camp. (Check out the video of his session’s closing ceremony, titled “We’re Different, We’re Equal.” It was livestreamed.) “It’s really, really awesome. There’s a lot of diversity, and I can make a lot of friends. They also have great food.”

Scientists Are Simulating Mass Animal Die-Offs in an Oklahoma Prairie

Join us for a daily celebration of the world’s most wondrous, unexpected, even strange places.
cold war

Matthew Moore captures places where monuments once stood—and then finds the statues as well.
music

The theremin's mystery endures, and virtuosos are still fighting for its recognition.
Video