For Sale: A Sprawling Carriage Factory and the House on Its Roof - Atlas Obscura
Want to see fewer ads? Become a Member. 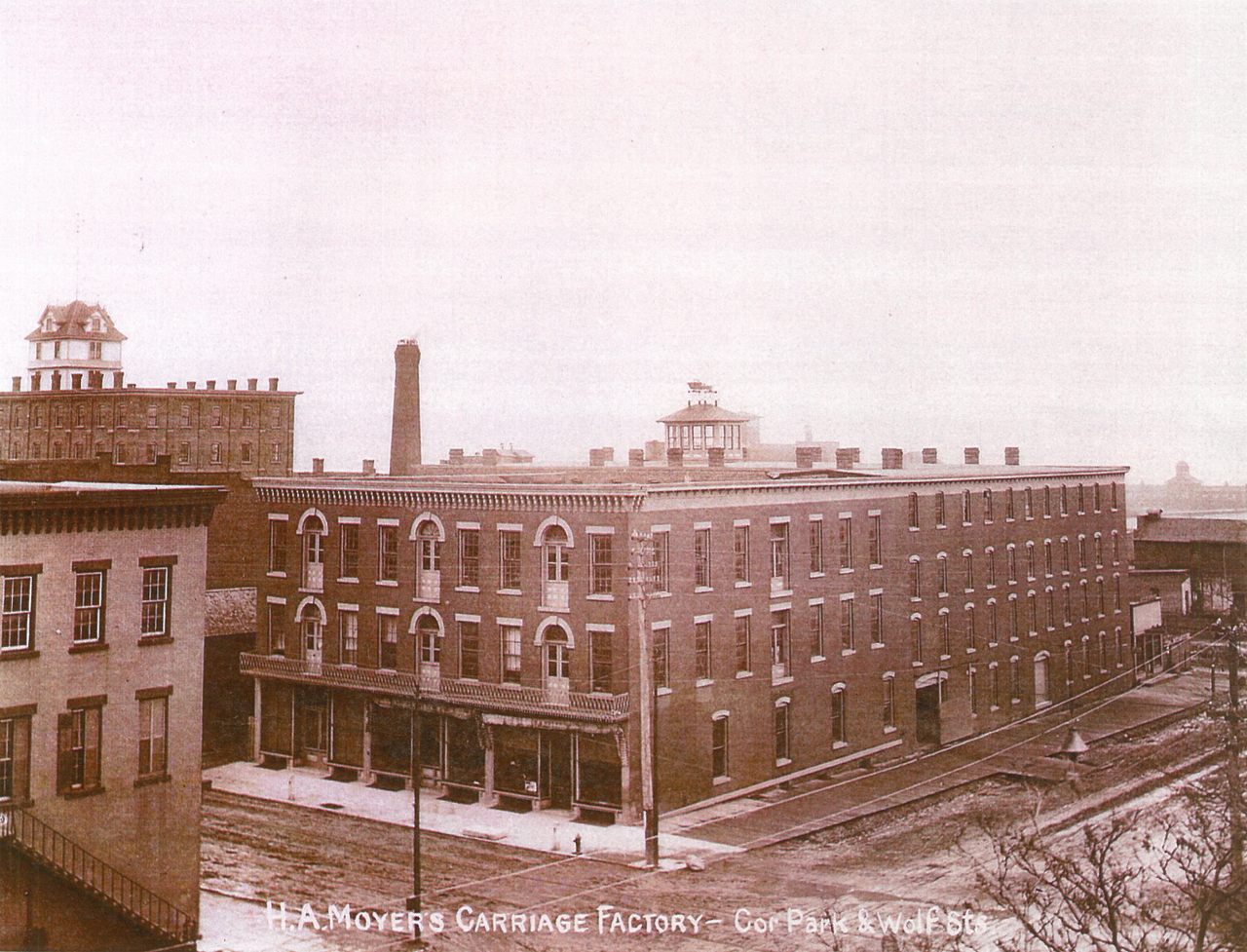 The rooftop house, pictured here on the left, goes way back. Courtesy Martin McDermott
In This Story
Destination Guide

Harvey A. Moyer got into the carriage-making business about a quarter-century before the Ford Motor Company started making cars. It was a hard time to bet on the horse-hauled market. Moyer, who eventually got into the luxury automobile business himself, operated out of a vast brick factory complex in Syracuse, New York, at a time when other manufactures were revving up production to try and keep pace with rivals. More than a century after Moyer’s business ran out of gas, his old factory is up for sale. It comes with a storied history and a mysterious house perched on top.

Moyer mainly trafficked in handmade, horse-hauled vehicles. The H. A. Moyer Carriage Company set up shop in 1876, and the first building in Moyer’s industrial compound in Syracuse—which would eventually sprawl across some 200,000 square feet—went up in 1880, according to the Preservation Association of Central New York. By the first decade of the 1900s, when automobiles started bumping their way into the mainstream, Moyer expanded the factory’s footprint and broadened his business to so-called “horseless carriages.” He peddled a humble number of cars each year, built one at a time. But as Henry Ford and other manufactures began sending cars rolling off assembly lines—which led to zippier production and lower prices for customers—it was clear that Moyer was getting left in the dust.

After the Moyer business went defunct, the complex became home to Porter-Cable, which still manufactures power tools. Later, it was home to the Penfield Manufacturing Co., and produced mattresses and box springs. The factory’s most recent owner, Yiorgos Kyriakopoulos, purchased the facility around 2005 and used it as a parking garage for a vast collection of vehicles.

Kyriakopoulos died a few years ago, and his estate is looking to offload the property, says Martin McDermott, a real estate salesperson at JF Real Estate who is overseeing the sale. The property is listed at $1.625 million, which includes all of the buildings and 2.2 acres of land.

When the crew at JF Real Estate first got a glimpse inside, they found that Kyriakopoulos had left his mark. “There was an old fire engine, and engines from Porsches, and 50 or 60 cars, including a Mercedes,” McDermott says. “He would be able to drive them right in and store them, and there was a big outside lot with trucks, boats, and stuff.”

But there were traces of the building’s various past lives, too—the Penfield Manufacturing name on the side of one building; an interior corner with large windows and intricate woodwork, which McDermott suspects may have been an H. A. Moyer showroom; and a Mad Men-era office suite, with ceiling tiles and paneling that seem to date from the Porter-Cable days.

As many bystanders have noticed over the years, there’s also a curious little house plopped on the roof of the building that still bears the Penfield name. It’s been there for over a century, but “there’s just so much unknown about it still,” McDermott says. According to Syracuse Landmarks, a 1993 book about the city’s architectural history produced by the Onondaga Historical Association, it was an advertising stunt. There was once reportedly a carriage parked next door. (Now, according to the book, the house conceals machinery and sprinklers; McDermott says it powers the elevator, but he isn’t sure when that contraption was added to the building.) This story about the gimmick was repeated by Moyer’s daughter, Syracuse’s Post-Standard newspaper reported.

That tracks, more or less, with what McDermott has found: “If you’re thinking it’s a three-bedroom house, and here’s the kitchen, there’s no remnants of that,” he says. But then again, he adds, the interior includes some intricate detailing, such as beadboard and crown molding, that would be surprising in a place meant to be viewed from far away, and only from the outside.

The complex is currently under contract, McDermott says, but the deal isn’t done just yet—another one stalled out last year. If it does get squared away, the property would eventually be transformed into several types of residences. One order of business would be applying for landmark status, so that the developer could leverage state historic tax credits toward renovations, McDermott says. These funds come with several strings attached, he adds: “They want to make sure that, at the end of the day, the historic nature of the property is maintained, it’s still intact, and that people walking by have a sense and feeling of how the area was when it was built.” If you happen to buy the complex and fix it up, you could live alongside the ghosts of the industrial past—maybe even from a roost on the roof.

For the Madagascan Aye-Aye, the Rule of Thumb Comes in Two

For a century, a “fraternity of lunatics”—inspired by a driving pioneer and a 1980s movie—has raced across the United States. Is the newest record unbreakable?
objects of intrigue

The Sheldon is a one-of-a-kind testament to the ingenuity—and unrequited love—of its creator.
cars

The spring pygmy sunfish and a Mazda Toyota plant are going to be neighbors.
Video