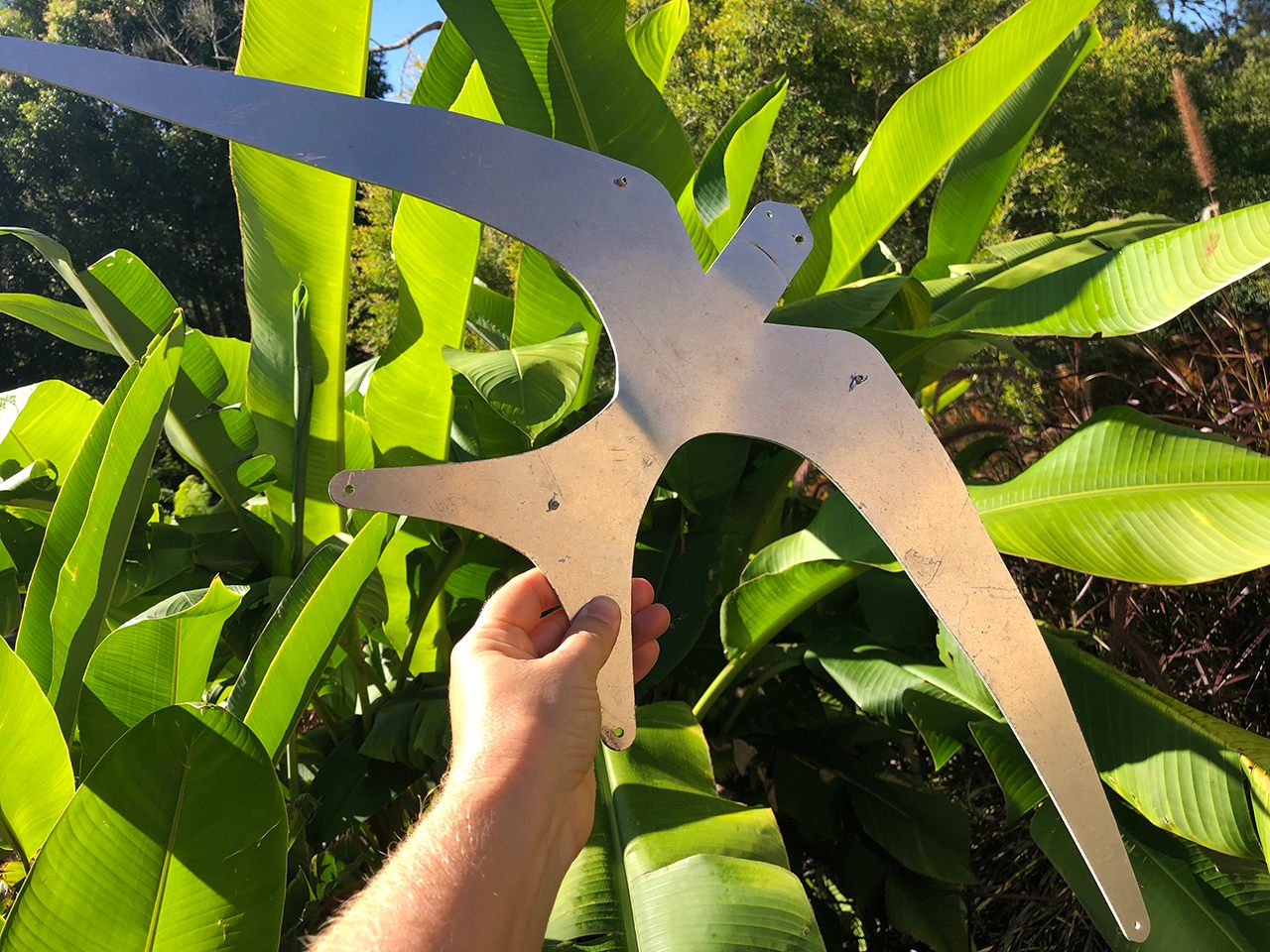 A bird in the hand: Part of the "Bayshore Drive Lighthouse" sculpture takes wing. Vivienne Pearson
In This Story
Destination Guide

On a dairy farm in eastern Australia, along a road that winds its way into the hills inland from Byron Bay, six aluminum birds decorate the stump of a tree, glinting in the late afternoon sunlight.

The birds belong to Debra Allard, a 57-year-old farmer and cheesemaker. A few months ago, they belonged to a sculpture—a 30-foot-tall shiny metallic mass. Or, as many local residents called it during its nine months of life as a public-art installation, a metallic mess.

Allard, like most of her neighbors in this district, “didn’t like it” at all when she first saw it. In fact, she says, “Everyone enjoyed having a laugh about it.”

But sentiment has changed—and so has the sculpture. Allard’s birds are now among 4,000 pieces of the sculpture that are enjoying a second life.

The story starts in 2018, when the Byron Shire Council decided that an artwork should adorn a newly constructed traffic roundabout on the main road into Byron Bay, Australia’s playground for Hollywood A-listers like Chris Hemsworth, backpacking travelers, and new-age hippies.

The laid-back region features gorgeous beaches, a rugged cape with a white lighthouse, and a series of cute-as-a-button towns. But the roundabout itself is such an ugly traffic juncture that a beautifying piece of public art was deemed necessary.

The problems started when the commissioning process became, by the council’s own admission, a rushed affair—with only one month for artists to pitch their ideas, and insufficient money to fully realize the artist’s vision. The result was a universally loathed installation, officially called the “Bayshore Drive Lighthouse Sculpture.”

The aluminum artwork was supposed to look like thousands of birds circling a lighthouse. What it actually looked like—though it was never fully finished due to the controversy it attracted—was a mess of aluminum foil, or a hurriedly stored Christmas-tree tinsel. Thanks to its phallic shape and shiny texture, the nickname “Disco Dong” was coined—and stuck.

Vitriolic campaigns to remove it, waged on social media and in local papers from the moment the Disco Dong was installed, proved both strong and effective. In September 2019, just nine months after it was put in place, the sculpture was decommissioned.

During its short life in the roundabout, the artist, Corey Thomas, was subjected to online ridicule and in-person hatred. Even before the sculpture was completed, drivers were yelling insults at him out their car windows as he worked in the traffic circle.

The hatred was so intense that Thomas, a Melbourne-based sculptor, went to ground. He removed his website and social-media accounts and declined requests for comment. For this story, however, Thomas decided to speak publicly about the installation for the first time, saying that “the process of the Lighthouse Project has [left] tangible lacerations” on him, both as an artist and a human being.

Soon after it was decommissioned, the Disco Dong was thoroughly dismantled. After it was taken down by cranes, the individual birds were removed by hand and cleaned up.

The birds—which range in size from an outstretched hand to a large platter—were sold off by the council in December for AUD$20 (about $12 U.S.) each. Interested buyers registered their intention by email, then collected their birds at an indoor sports arena on a designated pickup day. The sale—an idea that may have first been suggested by a community member in a social-media post—aimed to both recoup costs and ensure that valuable metal didn’t go to scrap.

And so, like a flock of phoenixes rising from the sculpture’s ashes, the artwork has been reborn as 4,000 individual birds.

Since December, the birds have been gradually hung in gardens and fastened to walls. Others are sitting in garages, waiting for their owners to find time and inspiration. Many can now be seen throughout the Byron region, and some have made their way abroad—via mail or suitcase—and now appear as far away as Singapore, Switzerland, and Canada.

The birds are overwhelmingly beloved by their new owners. But not everyone is a fan. One local who has no interest in owning a bird is Rob Jansson, a 52-year-old originally from Connecticut who now lives near Mullumbimby, the second-biggest town in the region, known for its hippie vibe.

“For me, the lighthouse birds represent suffering and bad karma,” he says. “The entire sad debacle is not something to celebrate or remember.”

Jansson considers the entire process, including the artwork’s original inspiration, to have been a failure. “The sculpture was a monument to a whalers’ lighthouse rather than to natural beauty or the area’s rich indigenous history,” he says. “It was a waste of energy—as aluminum is very electricity intensive—as well as a waste of time, money, and community focus.”

Jansson says he’s also upset by the viciousness that was directed at the artist.

For his part, Thomas—who says he was involved in the decision by local officials to decommission the sculpture—says he’s pleased by how his work has been reimagined. “It was a decision for the artwork that I made with the council,” he says. “I’m really happy with this emergence.”

He considers the discrete birds a “new activation” of his work, rather than an entirely new piece of art. “I see all these birds as part of the original artwork, just scattered and dispersed,” he says, adding that the process has prompted him to reconsider the meaning of public art.

“This reincarnation seems to allow bite-size chunks to inhabit the community—an echo or trace [of the original sculpture] that has been created by the people for the people. It has many poetic associations—winds, change, migration, climate, flight, and freedom.”

Allard agrees. As her cows gather for their afternoon milking, she says that while she’s not much of an art lover, a combination of curiosity and the birds’ quirkiness is what drew her in. Now her birds are a welcome part of her daily life.

“I’m alerted to the arrival of the milk tanker by catching a flash of its metal in the sunlight as it comes down the road,” she says. “Now, from my workbench, the birds give a similar flash.”

Allard says she hopes that Thomas will approve of his work’s new placement. “He’s more than welcome to come over to see the birds and have a cup of tea,” she says. “Or a glass of milk.”

Owners of the lighthouse birds have become the subject of envy. People inquiring about buying unwanted ones are increasingly common. But Allard won’t be selling hers anytime soon.

“They cause joy,” she says—an emotion much needed in a region recovering from a summer of drought, bushfires, and flooding rain. “They are a little piece of history.”

A restoration project has given a once-iconic sculpture a new lease on life.
art