An Emotional Support Dog Is the Only Thing That Chills Out a Cheetah - Atlas Obscura
Want to see fewer ads? Become a Member. 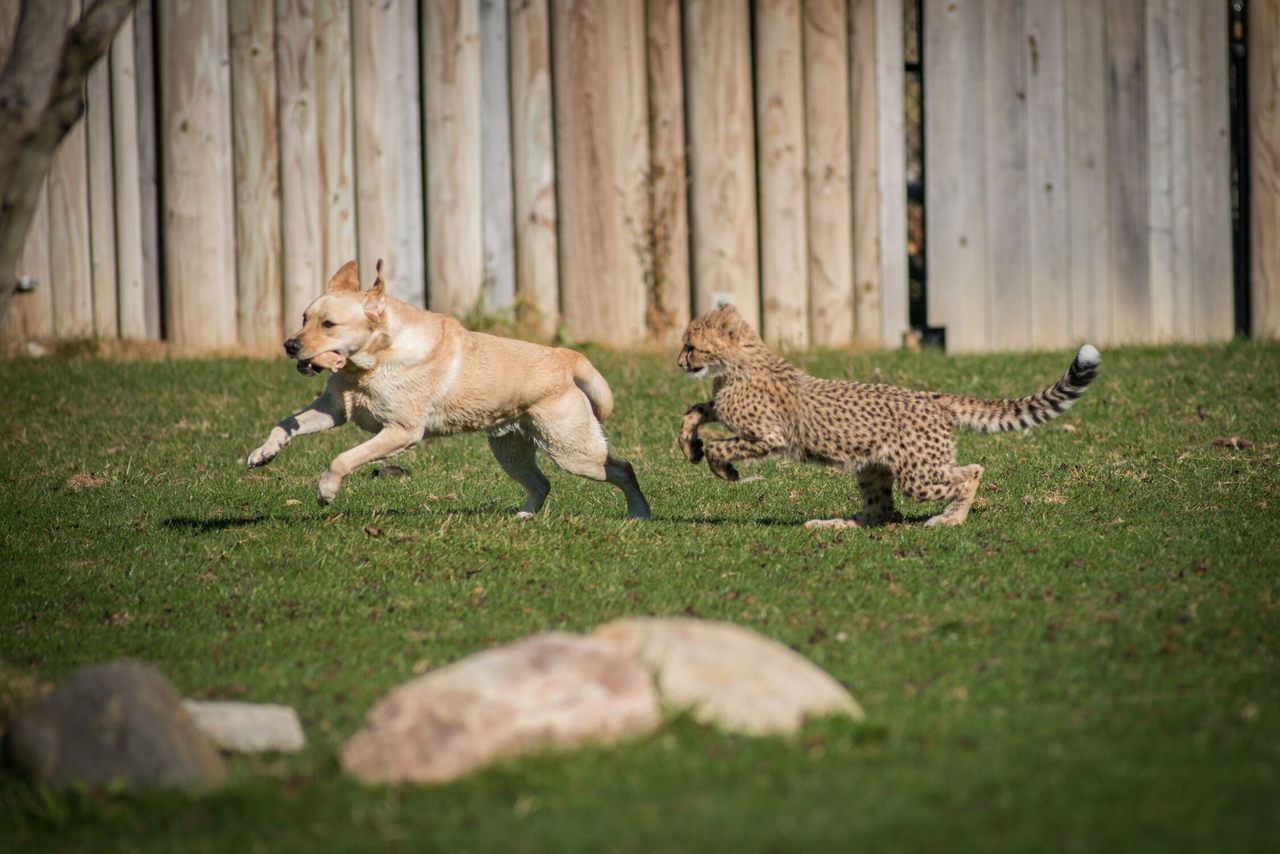 Cheetahs and dogs weren’t always friends. And at first glance, the feline-and-canine couple seems an odd pairing—one that turns heads for its cuteness, if not its unconventionality.

But the practice of rearing young cheetahs with a canine companion has become a major means of relaxing the notoriously nervous cats at U.S. zoos from New York to San Diego.

The relationship didn’t begin there, however. Nor, for that matter, did it start on an African wildlife reserve. Captive cheetahs and dogs first became friends in a small town in Oregon.

In 1976, research scientist and conservation biologist Laurie Marker was living in Winston, a town of about 3,000 people. As the curator of a cheetah-breeding program at Wildlife Safari, she found herself hand-rearing a lonely cheetah cub named Khayam.

Cheetahs are companionable litter-mates, but Marker had no other cats to put with Khayam. So she decided to try pairing the fastest land mammal on the planet with the animal typically thought of as a human’s best friend.

And it worked: Khayam and a Lab-mix named Shesho became fast friends.

Raising Khayam with a dog “provided friendship, security, and [helped keep the cheetah] calm,” Marker says in an email. “Companion dogs act as a surrogate for cheetah siblings … It is the friendship between the two individuals that creates a strong bond, and this is what makes for a successful pairing.”

In other words, it chills the cheetah out. Now, when a cub that’s abandoned or orphaned ends up in human care, many zoos pair the cat with a dog as a substitute sibling.

“When I provided the San Diego Zoo with a cheetah named Arusha five years later, I recommended placing a puppy with him,” Marker says. “They did, and the publicity around the cheetah-dog duo made the popularity of companion animals soar.”

There’s no doubt that cheetahs lead stressful lives. Hunted to extinction in India, Israel, and Egypt, there are now fewer than 7,000 of them left worldwide. That’s a drop of more than 90 percent since 1900. And in the wild, only 5 percent of cheetah cubs make it to adulthood, due to lurking lions, hyenas, and poachers, plus the constant threat of not getting another meal.

“The cheetah would rather flee than fight,” says Suzi Rapp, vice president of animal programs at the Columbus Zoo and Aquarium, which has 16 cheetahs and four companion dogs. “Even though the cheetah has this [incredible] speed, there are predators that are bigger and badder than they are.”

All of which makes the animals nervous, even in captivity.

Dogs, on the other hand, are often mellow. Thousands of years of instinct have been subdued and replaced by thousands of years of domestication. From the historical use of hunting dogs and sled dogs to today’s show dogs and Internet dogs, canines occupy a special place in the human heart. We’ve also taught them to provide furry, drooling therapy for everyone from babies to college students to, evidently, Africa’s rarest big cat.

Captive cheetahs form singular bonds with their companion dogs, which are usually easygoing breeds eager to make new friends. But cheetahs are as fickle as they are fast. “I can always introduce an older dog to a new cheetah, but I can’t introduce an old cheetah to a new dog,” says Rapp.

In the wild, male cheetahs often form “coalitions”—tight-knit groups—to get this companionship. But female cheetahs are solitary and rear cubs on their own. Even in captivity they’ve been known to occasionally forsake single cubs.

Some zoos keep their dogs with their cheetahs at practically all times. Other zoos, such as the one in Columbus, have their dogs behave more like service animals, and only accompany their cheetahs while they’re on the clock.

The original Khayam became such a celebrity that she has a statue in downtown Winston, and was named a “Notable Oregonian” by the state legislature.

The relationship, an adorable example of mutualism, has captivated zoo visitors and clearly benefited the jumpy felines. The cheetahs get a sense of security, and the dogs get a new best friend.

“[Cheetahs are] extremely high-stress animals,” says Roy. “Dogs are everyone’s best friend. Cheetahs soak that in.” So much so, she says, that some are called “the dog of the cat family.”

Roy now looks after Rhino, a five-breed mix, and Khayam Jr.—a “packaged little duo.” The two reside at the same safari park where Marker hand-raised her cheetah, the new cub’s namesake, over 40 years ago.

Though there’s no one dog breed built especially for cheetah therapy, zoos use individual ones that are confident and roughly same size as the big cats. (Best to keep the chihuahuas at home.)

This practice also derives from Marker’s work. Now living in Namibia, where she founded and runs the Cheetah Conservation Fund, Marker uses Anatolian shepherds to guard cheetahs from predators and poachers alike. But for companionship purposes, she has a different choice.

“I recommend using a Labrador or golden retriever,” she says. “Calmer breeds are better for cheetahs and easier for people to manage.”

Since Khayam got her doggy pal over 40 years ago, the canine-feline relationship has become a benchmark in captive-cheetah care. Relaxing the cats is also key to helping repopulate the species. After all, a relaxed cheetah is an eager cheetah.

“It’s a very beautiful relationship,” says Rapp. “Our cheetahs are so secure, because they have their dog.”

Yancia the bulldog even made the local paper: "This Seattle Dog Wears Flu Mask."
sailors

From war to exploration to pleasure cruising, pets have often accompanied us on the oceans.
natural history museums