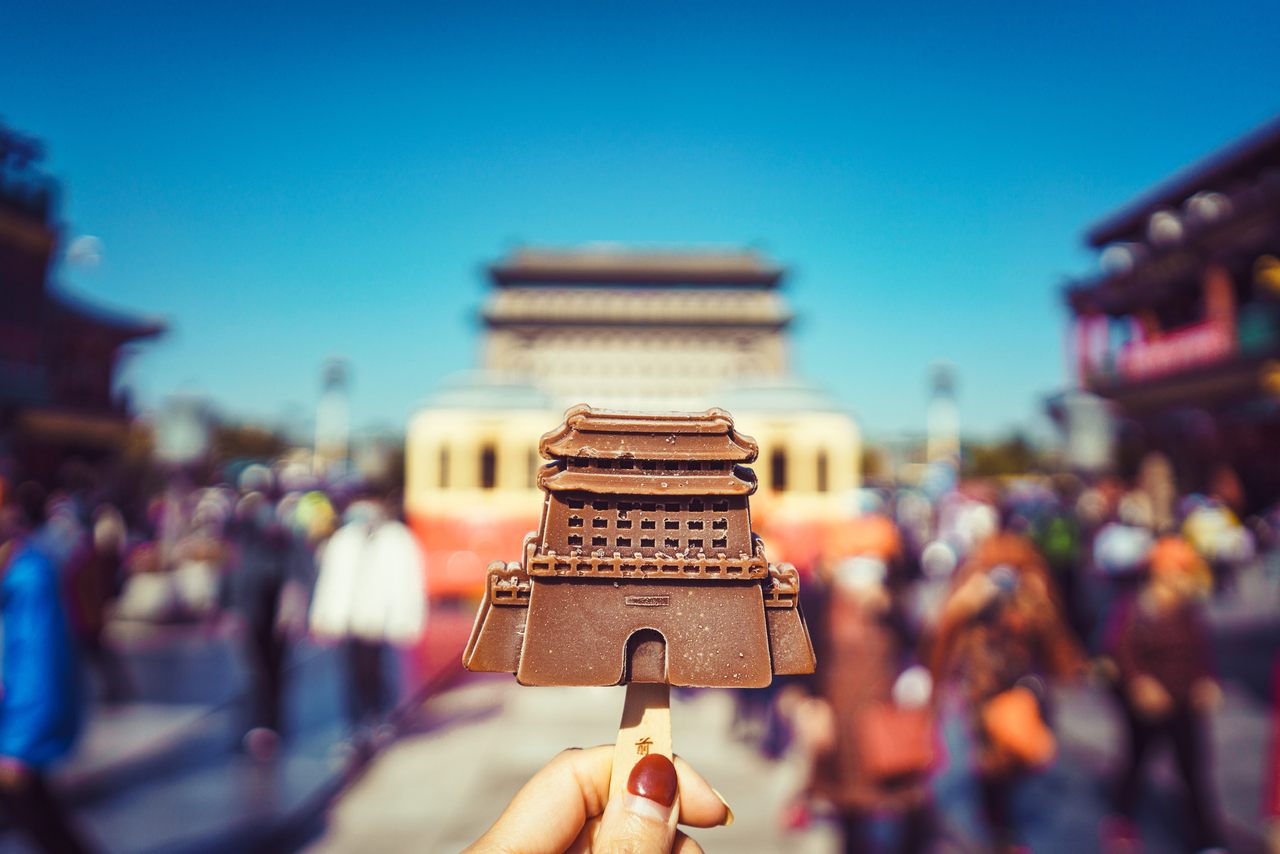 The Front Gate of Beijing's City Wall, as rendered in ice cream. Shihan Shan/Getty Images
In This Story
Destination Guide

Summer means ice cream, which, for those of us willing to sprint after the ice-cream truck, often means sweet, frosty cones and cartoon popsicles. Currently in China, though, ice-cream bars have left pop culture far behind. Instead of Spongebob on a stick, visitors to the mausoleum of China’s first emperor can eat a chocolate version of his tomb’s famed terracotta warriors. At the famous West Lake in Hangzhou, visitors sighing over the romance of legendary lovers Bai Suzhen and Xu Xian can buy dual ice-cream bars in their honor.

Over the last few years, most cultural sites in China started offering customized frozen treats. Architecture, artifacts, and characters are all fair game to be rendered in ice cream or sorbet. Often extremely detailed, everything from the Yellow Crane Tower of Wuhan to the delicate, once-a-year flowers of Kunming’s famous jacaranda trees has a corresponding ice-cream bar. The flavors are just as varied, ranging from strawberry to chocolate, tiramisu to peony. Tourists eagerly snap up the bars from gift-shop freezer cases to show off on social media, often with the actual historic site in the background.

There’s so many of these ice cream bars, in fact, that TikTok user Lisa Li was able to make two videos showing off different varieties. (Li works for Chinese for Affirmative Action, a nonprofit in San Francisco, and only created her TikTok account a few weeks ago in order, she says, to advocate for Asian Americans with news and facts about Chinese culture.) According to Li, these ice-cream bars are all the rage on Weibo, the Chinese social media platform she compares to Twitter. The images of people holding up the ice-cream bars caught her attention immediately for their cuteness. But as she scrolled, she realized that hundreds, or perhaps even thousands, of cultural sites have adopted themed ice cream as a souvenir.

For the last few years, Li explains, the Chinese government has been furiously promoting its domestic “cultural and creative industries,” or 文化创意产业. These include everything from architecture, design, media, and art, emphasize design and execution, and often reference traditional Chinese culture. The trend even reached the freezer case, so much so that the general term for tourist-targeted ice creams is 文创雪糕, or “cultural and creative frozen treats.”

Li theorizes that the rise of cultural and creative products started at the Forbidden City. In 2016, the Beijing museum began selling washi tape emblazoned with artifacts and images from the palace complex. The tape was a hit and spurred a wave of hyper-specific products (mugs, Oreos) inspired by the site. Recently, the Forbidden City had another hit with its ice-cream bars shaped like its famous statues of auspicious beasts. The phenomenon, many have noted, has implications far beyond the freezer. As Zhou Yunqing, a sociology professor at Wuhan University, told Xinhua, “It is also a manifestation of China’s growing cultural confidence.”

But how do they taste? “Some of them are pretty good,” notes Li. In the end, it’s mostly about the shape and color, and how well the ice creams photograph. That’s not to say they are all photogenic winners. Take the city of Chongqing’s People’s Liberation Monument, for example. Made of brick and mortar, it’s a respectable piece of architecture. As a tubular, bulbous, peachy-red ice pop, however, it’s uncomfortably phallic. Cue the social media free-for-all.

But at least some effort was obviously put into it. Woe betide the park or museum that phones it in with their cultural and creative frozen treats. Li, after our interview, emailed me an article titled “I Ate a Stomachful of ‘Cultural and Creative’ Ice Creams, and Here is the Ugliest One.” It featured a truly hideous ice-cream bar sold by a park in Beijing. The anthropomorphic, misshapen, buck-toothed maple leaf was meant to honor the park’s famous foliage.

The author generously noted that perhaps children could enjoy such clumsy-looking frozen treats. However, they went on to compare the current ice-cream phenomenon to a martial-arts tale. Judged by the harsh standards of social media, the field of cultural and creative ice cream, they wrote, “is a cruel world of adults.”

A gift guide from the Atlas Obscura team.
space exploration

The landscapes on Hormuz, Iran, are striking—and edible.
Video