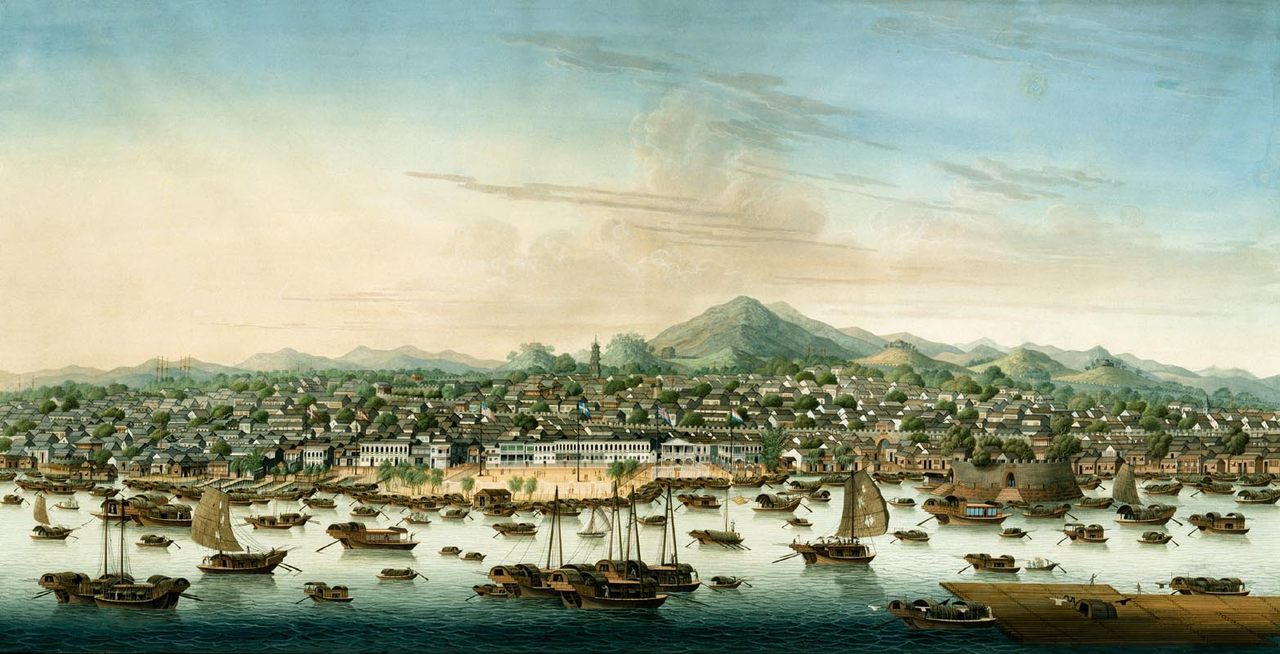 A painting of the city of Canton circa 1800, where Ching Shih lived before she became a pirate. Public domain
In This Story
Place

Venture into the hideout of one of Hong Kong's legendary pirates.

At the dawn of the 19th century, a former prostitute from a floating brothel in the city of Canton was wed to Cheng I, a fearsome pirate who operated in the South China Sea in the Qing dynasty.

One of the names under which we now know her, Ching Shih, simply means “Cheng’s widow,” but the legacy she left behind far exceeded that of her husband’s. (She is also known as Cheng I Sao or Zheng Yi Sao.) Following his death, she succeeded him and commanded over 1,800 pirate ships, and an estimated 80,000 men. In comparison, the famed Blackbeard commanded four ships and 300 pirates.

“She was absolutely, unquestionably the greatest pirate who ever lived,” says Laura Sook Duncombe, author of Pirate Women: The Princesses, Prostitutes, and Privateers Who Ruled the Seven Seas. “She pirated longer. She made more money. She surrendered of her own free will, got to keep her money, and live out the rest of her days in freedom, as opposed to being [cornered] and murdered by a government like Blackbeard was.”

Ching’s husband, Cheng I, was the formidable commander of the Red Flag Fleet of pirate ships. He had managed to unite many rival Chinese pirate organizations. He married the 26-year-old in 1801, and Ching “participated fully in her husband’s piracy,” writes Dian H. Murray in Pirates of the South China Coast, 1790-1810.

The story goes that Cheng sought his bride out due to her reputation as a shrewd businesswoman: Ching Shih apparently used the secrets she learned as a prostitute to wield power over her wealthy and politically connected clients. There are no primary Chinese sources to support this tale, but Ching Shih’s financial savvy certainly became undeniable over the course of her career in piracy.

It is rumored that Ching Shih demanded equal control of the pirate fleet as a condition of her marriage to Cheng I in 1801. “Where business acumen starts to display itself is in the way she became the overall head of the entire confederation,” says Murray. Female pirate leaders were a rare phenomenon, and Murray is only aware of one other woman commander, a Mrs. Hon-cho-lo, who was active in Hong Kong in the first half of the 20th century.

Six years into their marriage, Cheng I died at the age of 42. Not much is known about how he passed away. Some accounts indicate that he was killed at sea by a tsunami, while others insinuate that he was murdered in Vietnam. Regardless of the circumstances, his death left Ching Shih in a precarious position.

Her husband’s adoptive son and heir, Cheung Po Tsai, was originally the one to inherit control of the Red Flag Fleet. Cheung Po Tsai, however, was more than just Ching Shih’s stepson–the young fisherman had also been her husband’s lover. Though a sexual relationship between an adoptive son and his father may seem unusual, the adoption itself was not entirely out of place.

“Unlike in the West, ‘adult’ adoption was often practiced in China in order to establish a kinship basis for further interaction, particularly of a business or discipleship sort,” says Murray. “Cheng I adopting an adolescent fisherman’s son was not too out of the ordinary.”’

Within weeks of Cheng I’s death, Ching Shih had taken Cheung Po as her lover as well, eventually solidifying the relationship through marriage. Soon, she managed to maneuver herself back into power, and obtained leadership of the Red Flag Fleet.

As a woman in command of a huge pirate fleet, Ching Shih had her work cut out for her. “Pirate vessels often had a few women on board, but it is not clear to what extent they were or were not practicing pirates,” says Murray. Unlike in the West, in South China there was no stigma attached to women being on board a ship or any fear that it was bad luck for the ship. Nevertheless, it wouldn’t have been easy for anyone, much less a pirate’s widow, to control so many outlaws.

An East India Company employee named Richard Glasspoole was captured by Ching Shih’s pirates in September 1809 and held until December of that year. In his account of the ordeal, he estimated that there were 80,000 pirates under Ching Shih’s command, and some 1,000 large junks and 800 smaller junks and rowboats.

Ching Shih unified her enormous fleet of pirates using a code of laws. The code was strict: any pirate giving his own orders or disobeying those of a superior was to be beheaded on the spot. The code was particularly unusual in its laws regarding female captives. If a pirate raped a female captive, he would be put to death. If the sex between the two was consensual, both would be put to death.

There are further accounts of Ching Shih’s code that state that if a pirate took a captive as his wife, he was required to be faithful to her (although others say that captains would have multiple wives). “Whatever they thought about her, it does seem clear that the pirates respected and obeyed her authority,” says Murray.

The Red Flag Fleet under Ching Shih’s rule went undefeated, despite attempts by Qing dynasty officials, the Portuguese navy, and the East India Company to vanquish it. After three years of notoriety on the high seas, Ching Shih finally retired in 1810 by accepting an offer of amnesty from the Chinese government.

“What precipitated the surrender seems to have been an internecine conflict between the Black and Red Fleets and their leaders, which first led to the surrender of the Black Flag Fleet and then ultimately, to the Red Flag fleet,” says Murray. “I imagine that given mounting pressure from the outside for their suppression and internal loss of cohesion, that she realized the time had come to give up.”

Ching Shih died in 1844, at the ripe old age of 69. The legacy she left behind from the time of her rule has penetrated popular culture. She even inspired a character in the The Pirates of the Caribbean franchise: the powerful Mistress Ching, one of the nine Pirate Lords. While nothing is known about the years she spent following her retirement, one can only hope she spent her last days in peace and anonymity, away from the harrowing life on the seas where she made her name.

This story was updated to include new scholarship on female pirates.

The Rare Meteorites Going on Sale for Millions

The new book "Pirate Women" uncovers the stories of the women who sailed their way into history, cutlass in hand.
ships

From the Inupiat seamstress who killed polar bears to the Black motorcycle queen of Miami, these daring women lived life on their own terms.
restaurants