This Prized Filipino Fabric Is Made From Pineapple Leaves - Gastro Obscura 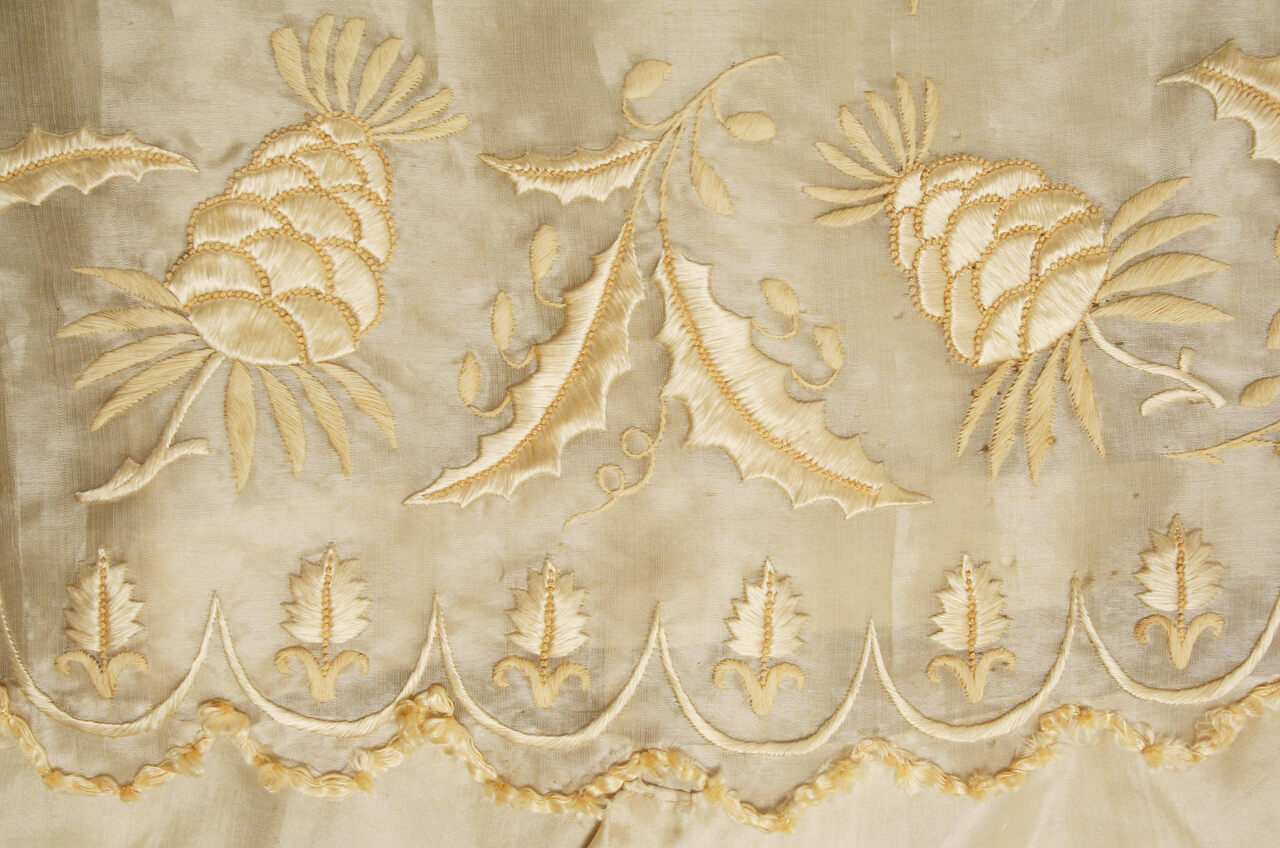 A detail from a Regency-era dress made of silk and piña. The Metropolitan Museum of Art/Public Domain
In This Story
Place

A giant pineapple, a symbol of hospitality, and an amazing vacation rental option.
Destination Guide

Filmy, cream-colored, and embroidered, piña cloth has been worn by a first lady and gifted to royalty. Museums across the world hold exquisite piña dresses in their collections—a legacy of a 19th-century fashion trend. Part of the appeal comes from the fabric’s natural elegance. The Filipino fabric has long been a touchstone of national dress; it’s the traditional, if expensive, option for long Barong Tagalog garment, Maria Clara dresses, and the occasional wedding gown. But people have long been entranced with its origins: As the name suggests, it’s made from the long leaves of pineapple plants.

As early as the 17th century, piña was noted for its elegance. It’s something of a fusion fabric, says Dr. Michael Gonzalez, adjunct Philippine history professor at the City College of San Francisco and research and education director for the Hinabi Project, a nonprofit aimed at raising awareness of Filipino traditional textile traditions. Pineapples, likely native to Brazil, were brought to the Philippines by Spanish colonists, and Filipinos used age-old local weaving methods to turn pineapple fibers into gauzy piña. Chinese immigrants brought the frame loom by the 18th century, updating the weaving process.

The process of making piña hasn’t changed much since then. The dominant piña-growing regions are near Kalibo, the capital of Aklan province, and, to a lesser degree, Puerto Princesa on Palawan. Both have lots of rainfall, ideal for growing the red pineapple necessary for piña. (The leaves of the red pineapple can grow up to a yard long.) After harvesting the leaves and removing their spiny edges, piña makers use broken china to scrape away at them, exposing the fibers. Eventually, they swap the china for a shard of gentler coconut shell. When the thin, hair-like fibers are exposed, they are rinsed thoroughly in “good, clean river water” to remove any lingering glucose, says Gonzalez.

After drying, the fibers are tied end over end into thread and woven into fabric. It can take months to produce a few yards of cloth, and even then, the process isn’t over, as Filipinos value embroidery on traditional piña products. Designs vary in style, from simple patterns to florals and figures. The more elaborate the embroidery, the more expensive the final product.

How did piña make the jump from adorning elegant Filipino patrons to European royalty? It was aided by the continent’s love affair with pineapples. In the early 18th century, Europeans saw pineapples as exotic products of faraway colonies. The upper-class vied to get their hands on them, and they quickly became a symbol of wealth, and even an artistic and architectural motif. Gardeners built “pineries”: greenhouses dedicated solely to the fruits.

Some of that luster couldn’t help but rub off on piña fabric. According to Dr. Kate Strasdin, senior lecturer at the Fashion and Textiles Institute at Falmouth University, piña’s gauzy texture also suited British fashion trends, especially in the first half of the 19th century. Strasdin points to an empire-waisted, Regency-era piña dress in the Metropolitan Museum of Art’s collection as a sign of the pineapple’s enduring allure. Along the bottom border of the dress is a lavish design of golden pineapples.

Piña was even included as one of the marvels of the Great Exhibition of 1851 (an early and prominent world’s fair in London), and during the Crimean War, it became an alternative to cut-off supplies of Russian flax. In 1862, Princess Alexandra of Denmark received a piña handkerchief as a wedding gift. Sometimes, the fibers were woven into other fabric, giving it an elegant sheen. Both Strasdin and Gonzalez say it’s likely that some piña clothing in museum collections hasn’t been identified yet, due to a lack of early records and fabric analysis.

Back in the Philippines, piña production was heavily influenced by European design and demand. Unlike other indigenous textiles, “it’s pretty much embedded in colonial history,” Gonzalez says of piña. Due to the influence of missionaries and merchants, piña was often embroidered with the lace-like European designs that were so popular in the 18th and 19th centuries.

Domestically, Filipinos sought piña for its light weight in hot weather and its glossy beauty. After the British flooded the Filipino market with cheap cotton in the 19th century, says Gonzalez, its manufacture shifted. Weaving it became a household task: Most middle-class households had piña looms. “It was like having a piano,” Gonzalez says. That situation lasted until the Second World War, which “destroyed pretty much everything.” In the rebuilding, the laborious weaving of piña fell by the wayside.

But, Gonzalez says, the 1960s saw a resurgence, as the country emerged from what he calls “survival mode.” The controversial former First Lady of the Philippines, Imelda Marcos, also played a role, as her piña-cloth dresses became iconic. Global interest has also steadily grown, due in part to piña’s potential as an alternative, sustainable fiber.

Considering its labor-intensive nature, Gonzalez doesn’t think a massive piña industry is in the cards anytime soon. Part of the Hinabi Project’s mission is to encourage younger Filipinos to learn traditional weaving skills. “Most of the weavers are the average age of 50,” he says, noting that other countries, such as Japan, have nearly lost their age-old weaving traditions. Part of the process of fostering continuity, he believes, is promoting piña as a textile abroad while empowering domestic weaving communities. Weaving and wearing piña is now an inextricable part of Filipino cultural identity, Gonzalez says, and they need to help ensure its survival.

Found: The First Known Footprints of an Elusive Sabre-Toothed Cat

Cooking with marijuana is about umami and taste.
restaurants

Join us for a daily celebration of the world’s most wondrous, unexpected, even strange stories.
military history

And why does it need to "snap"?
Video • Wonder From Home

An eatery in a shallow river where diners can enjoy their meal mere feet from the base of an artificial waterfall.
Tokyo, Japan

Hidden on the 7th floor of a historic building, this Cajun spot features wall-to-wall bottles of hot sauce.
Want to see fewer ads? Become a Member.
From Around the Web
Related

Could Your Clothes Be Made Out of Leftover Bread One Day?

Maybe, thanks to the magic of fungus.
Read more
Thanks for sharing!