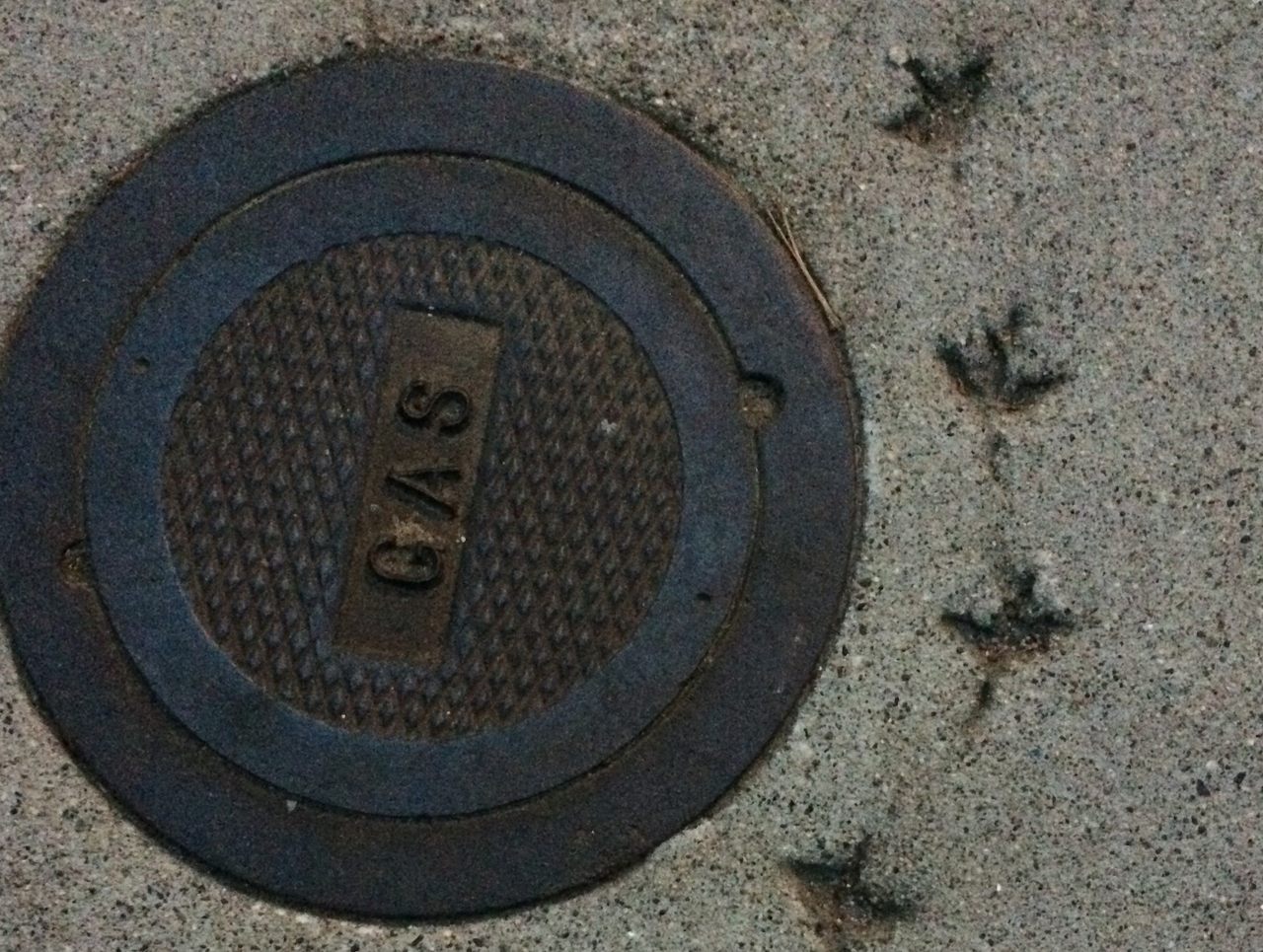 A creature has to land or scamper through wet concrete within a narrow window of time. Joey Kotfica/Getty

Cities have many layers. Pigeons swoop from one roof to another. Work crews descend beneath the asphalt to tend to sewers and gas pipes. And between the aboveground and subterranean realms, dogs, humans, squirrels, rats, and other creatures pad down the street, leaving traces behind. Sometimes, if you’re lucky, the concrete itself will be speckled with small, serendipitous impressions. In this way, urban sidewalks can hold modern trace fossils—proof of a creature that happened to pass by at precisely the right moment.

To find those preserved prints, you’ve got to reorient your relationship to the ground. When Carl Mehling was a second-grader in Queens, his mom walked him to school past a leaf in the sidewalk. “I regarded it as a fossil, and was scheming about getting a hammer and busting it out,” he says. Now, Mehling is a senior museum specialist in paleontology at the American Museum of Natural History in New York—and he’s still obsessed with the world around his shoes. When he’s in the field looking for fossils, or in the woods hunting for mushrooms, he says, “my eyes are always slammed against the ground.” He started zeroing in on concrete prints a decade or so ago, when a friend was looking to incorporate some into the endpapers of a book. That “flipped my switch,” Mehling says. “I just never stopped.”

Tracks in concrete are easiest to observe and photograph in raking light, in the morning or afternoon. “It improves the contrast and makes whatever’s there pop,” Mehling says. That’s the case with fossil tracks in older, wilder sediment, too. “There are places with dinosaur tracks that aren’t even noticed at high noon, but are sharply defined, even at a distance, at dawn.”

Since he began looking for them, Mehling has photographed several hundred concrete impressions. He’s found leaves with strikingly visible veins, and one print that looks like a dendrite or a bit of tousled seaweed, which he suspects is evidence of a lightning strike. He has encountered dainty little paw prints and some tracks that show signs of a scuffle, or worse. One slab in Queens, he says, was totally trampled by birds, and “looked like a war was going on.” His trove of images includes cat prints, dog prints, and so, so, so many pigeon tracks.

At least, that’s what he thinks they are. Scientists can’t necessarily identify a species from tracks alone, because multiple ones may have similar foot morphologies. For instance, it’s difficult to distinguish between the tracks of pigeons and mourning doves. Many gull species leave similar prints behind. Then again, webbed feet can be a telltale sign of birds that live around water, versus ones that may not—and it’s also simple enough to distinguish a hopping bird from one that strides. (Sparrows hop, Mehling points out, so their little prints are side-by-side, while many other birds place one gangly foot in front of the other.)

Because of this general ambiguity, and because the data set is tiny, concrete trackways aren’t necessarily useful as data, even though there’s been a flurry of scholarly interest in recent decades about urban ecosystems—the arthropods in apartments or backyards, the coyotes nosing through garbage cans, hedgehogs ambling through gardens and stone walls.

Still, concrete tracks could be useful to a researcher who tracks a species using a variety of methods, and then finds prints in an area where they aren’t expected. The prints would prove that that animal ventured there at least once.

It’s a slippery task to try and draw too many conclusions from the trackways—which actually makes them similar to prehistoric prints, Mehling says. When evidence is sparse, it can be easy to overinterpret it. For example, when a dinosaur trackway abruptly turns, Mehling says, it’s natural to speculate: Was it fleeing a predator? Stalking some tasty prey? Dodging a flooded path? Seeking shelter? In a lot of cases, that information is maddeningly out of reach. “A turn only tells you that it was capable of making a turn,” he says. Parallel sets of dinosaur tracks could indicate a herd walking as a group, he adds, or it could mean that a single animal followed the same path several times. Similarly, when Mehling finds a cluster of modern bird tracks zigging and zagging in concrete, he says, it’s hard to tell “whether it’s a bunch of birds, or one bird going bananas.”

Like their prehistoric counterparts, these tracks are precarious. “It’s surprising how fast they soften and erode,” Mehling says. They can also be lost to construction. And, just as conditions had to be right for T. rex tracks to stick around, there are requirements that must be met for anything squatting, scuttling, or scurrying to stand a chance of being preserved as an urban trace fossil. A creature has to land or scamper through within a narrow window of time.

New sidewalks in, say, New York City would likely be made of cement, water, sand, gravel, and possibly some flexible fibers to reduce cracking, says Shiho Kawashima, an associate professor of civil engineering and engineering mechanics at Columbia University who studies cement and concrete. When cement and water mingle, the combination creates a gloopy glue that fastens the sand and gravel together. How long that mixture stays wet depends on several factors, including temperature, humidity, and the composition, Kawashima says, but it would likely remain yielding enough to preserve a print for somewhere between two and four hours. “After eight hours, it will be strong enough for an adult human to step on it,” says Lin Shen, an associate professor of civil and environmental engineering at the University of Hawai‘i at Mānoa. In other words, a bird might leave no trace in 10-hour-old concrete.

Concrete trackways can’t tell us where an animal came from, where it was going, or why. But there are small stories to be gleaned from them. A pigeon missing a toe, for instance, may have been injured in a tussle with trash or a bit of human hair. These stories might even nudge us to be better stewards of our sidewalks and our cities. And the trackways—serendipitous, silly, ephemeral—are a reminder of all of the creatures that share a city. All of us are just passing through.

Of course, they are deep underground and came from 75-ton titanosaurs.
Video