The Thorny Problem of Tallying Every T. rex to Ever Live - Atlas Obscura
Want to see fewer ads? Become a Member. 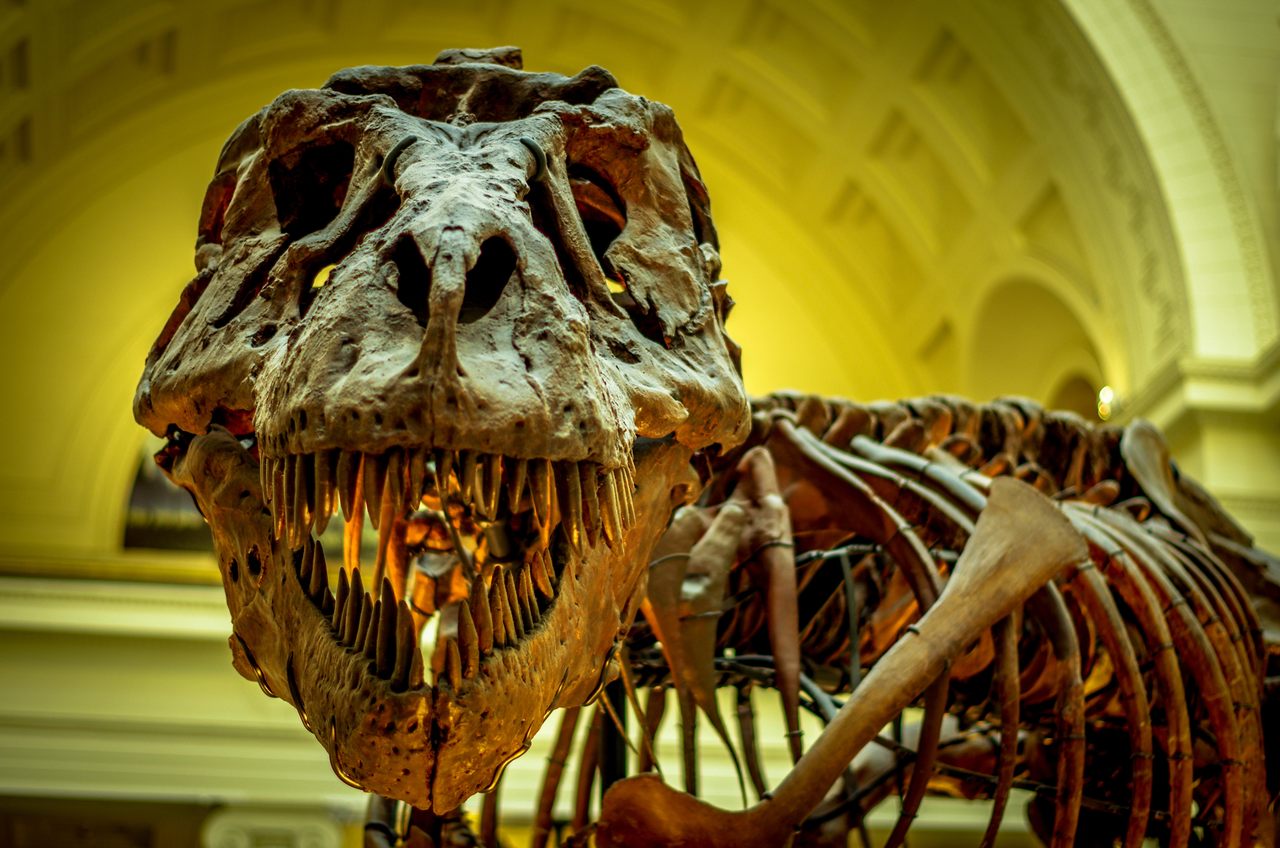 How many of you were there? Dimitri Carol/Alamy Stock Photo
In This Story
Destination Guide

Today, South Dakota is home to prairie and pasture, bisected by bands of asphalt and the sprawling squiggle of the Missouri River. In terms of human residents, the state is one of the emptiest in America, but millions of cattle graze on the land unfurling below a generous sky: In 2017, according to figures from the Census Bureau and the U.S. Department of Agriculture, South Dakota’s bovines outnumbered the state’s humans by more than four to one.

The local rocks have also yielded striking proof of the animals that roved the landscape long before cattle called these plains home. From the fossiliferous Hell Creek Formation, shale and sandstone that runs through both Dakotas in addition to portions of Montana and Wyoming, fossil hunters and paleontologists have freed some giants of the Cretaceous, including the famous Tyrannosaurus rex skeletons that would go on to be named SUE and Stan. SUE and Stan presumably had plenty of neighbors more than 65 million years ago, but there’s no consensus about how many T. rex once lived here: Because the fossil record preserves only the slimmest sliver of life on Earth—and paleontologists have probably encountered only a fraction of the fossils entombed in the ground—it’s a lot harder to take a census of the state’s prehistoric denizens than it is to tally the cattle munching and belching there today.

And it’s not just South Dakota: Researchers haven’t pinned down exactly how many T. rex lived across western North America during the millions of years their heavy steps rattled the ground. In a new paper in Science, a team of biologists and paleontologists from University of California, Berkeley, and the San Diego Natural History Museum lays out many of the unknowns that make the figure such a slippery thing to wrestle.

To estimate the T. rex population, the team, led by Berkeley paleobiologist Charles Marshall, drew on a method initially used to gauge abundance of mammals. That’s called Damuth’s Law, christened for John Damuth, the University of California, Santa Barbara, biologist who proposed, decades ago, a way of understanding the relationship between body mass and population density—more tiny creatures, fewer hulking ones.

To model the population size of T. rex, the team started with the notion that behemoths (as well as creatures with high metabolisms) need more space than their littler neighbors. Drawing on several T. rex skeletons, plus data on the dinosaurs’ growth and survivorship, the researchers estimated that the average adult weight of a T. rex was roughly 11,460 pounds, bookended with lower and higher limits of around 8,150 and more than 15,200 pounds. Using that weight, coupled with that relationship between population density and body mass in living species, they proposed that T. rex had a lot of room to itself, with two individuals ruling over an area the size of Washington, D.C.

The team also needed to know T. rex’s geographic range to estimate how many lived at once—and those answers are a little murky, too. Since the bulk of the species left no trace—and bones that endured may be buried in deposits that haven’t yet been excavated—the researchers puzzled out an idea of where the predators may have lived, even in the absence of fossils. Drawing from another study that modeled T. rex’s preferred climate, they gauged where else in North America the beasts may have lived, even if no bones have turned up there. This led them to suggest that around 20,000 T. rex lived at a time.

To make the leap to the number of generations that rambled and died over the course of the species’ lifetime—and, finally, the number of individuals that spanned it—researchers had to know how long a single T. rex tended to live. Happily, there is some information about that, thanks to the fossils themselves. Because the dinosaur’s bones offer a glimpse into their age much as tree rings do, scientists suspect that a T. rex lived to be somewhere in the neighborhood of its late twenties or early thirties. From there, the authors marched toward an estimate of the total number to have ever inhabited the Earth. They argue that the figure could be around 2.5 billion—around a third of the number of humans currently living on the planet, or 625 times the number of cows in South Dakota.

But this is just one possibility. Wading through the data, the authors stumbled into one unknown, then turned around and collided with another. The actual number of T. rex could be vastly different than the estimate. “The numbers are all over the place,” says Luis Chiappe, director and curator of the Dinosaur Institute at the Natural History Museum of Los Angeles County and the museum’s senior vice president of research and collections, who didn’t contribute to the paper.

And one guess can sway the whole shebang. “The biggest weakness of the paper is of course that the authors heap assumptions onto assumptions, meaning that whatever error there is in the earliest guesswork is compounded as subsequent calculations are built on each other,” writes Holly Ballard, a paleontologist at Oklahoma State University, in an email. “Even while trying to remain conservative, there is certainly error hidden in the analyses because of all the assumptions, but the authors are also transparent about it,” says Ballard, who wasn’t involved in this research. Chiappe says he “commends the effort and the mathematical exercise”—but given the vast variability, he’s not convinced that the data will be especially usable.

Broadly speaking, “anything about population size should be taken with a grain of salt considering preservational and, perhaps more importantly, collection biases,” writes Jingmai O’Connor, associate curator of fossil reptiles at the Field Museum in Chicago, in an email. Marshall says the usability depends on what a beholder is looking for. The team believes their estimates to be “accurate, but imprecise, but to a known degree,” he adds. “If you are happy with knowing that there were billions, not millions or trillions of T. rex, then our estimate is very reliable.”

Both Chiappe and Ballard say that this paper—which Ballard says “can best be described as a thought experiment”—could nudge other work along. “The method and approach could be helpful for others to infer population sizes of species for which we know more, and therefore we can constrain our variables a lot more,” Chiappe says. Because there are plenty of modern big cat analogs for saber-toothed cats, Chiappe could see the model being useful for estimating the population of the Ice Age megafauna. Ballard says the methodology could also help future researchers piece together “a hypothetical snapshot” of the full range of dinosaurs living in a particular environment.

While the number of T. rex remains uncertain, scientists have sketched other aspects of the prehistoric world in relatively fine-grained detail. The skulls, ribs, and other T. rex bones pried from Hell Creek have helped researchers understand a lot about the creatures’ movements and more, including how the dinosaurs used their puny arms and were beset by infections. Elsewhere, trace fossils such as trackways can indicate which animals trundled along in groups, and which ambled solo—at least on the particular occasion when their passage was preserved. By considering contemporary analogs for prehistoric plants, paleobotanists can even imagine what the air might have smelled like tens of millions of years before South Dakota was a state—when ponds were matted with plants similar to water lettuce, and the smell of pine from cypresses and redwoods tangled with the scent of a plant from the same genus as the modern tulip tree. Imagine T. rex tip-tromping through the ancient landscape—however many of the apex predators there were.

The Tales Layered Inside Narwhal Tusks

How We Know That This Dinosaur Had Bright, Audacious Plumage

Microscopic structures hint at an iridescent past.
dinosaurs

But they didn’t eat our ancestors—probably.
dinosaurs