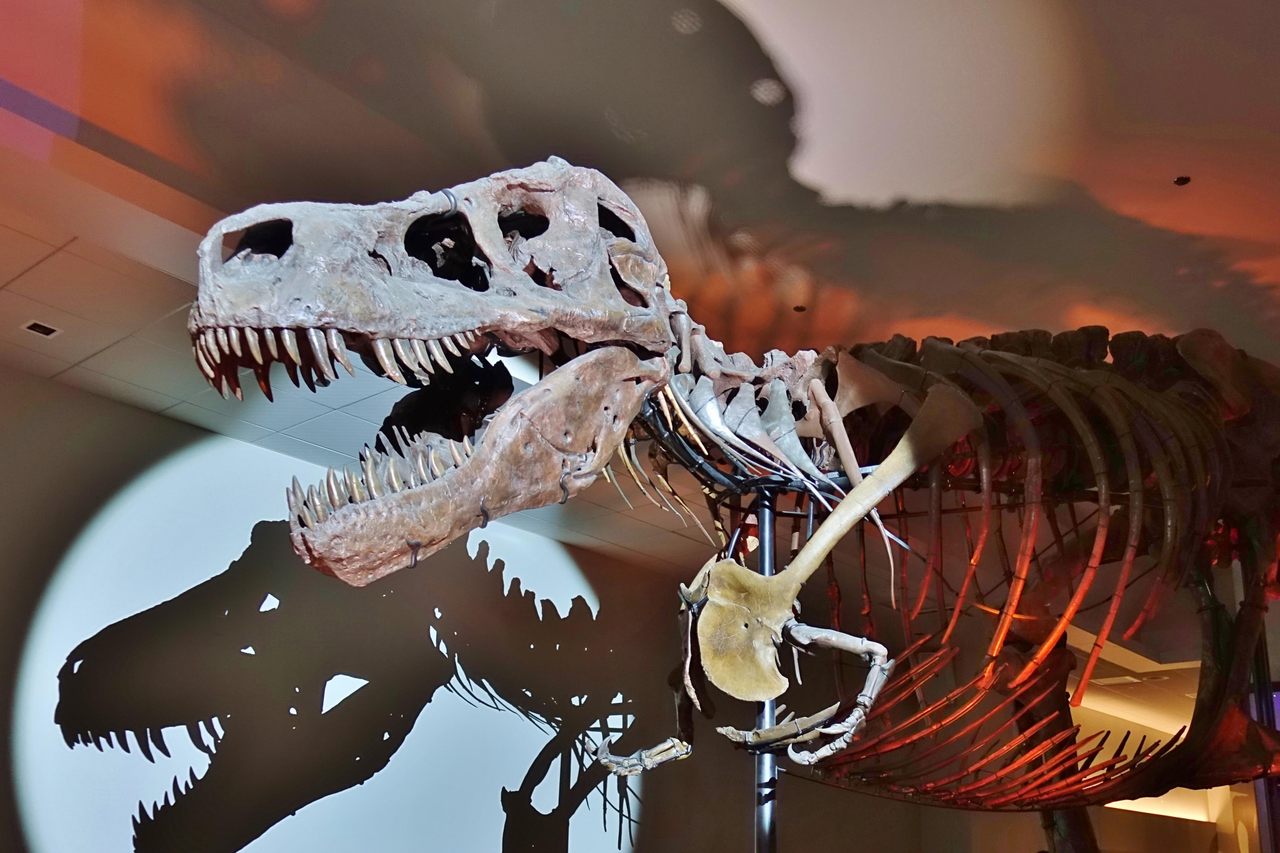 SUE could have used a breath mint. EQRoy/Alamy Stock Photo
In This Story
Destination Guide

Sixty-seven million years before SUE the Tyrannosaurus rex became one of the Field Museum’s major draws and one of Twitter’s sauciest pundits, the toothy “murderbird” stalked the land that is now part of the Hell Creek Formation near Faith, South Dakota.

Hell Creek has yielded scores of fossils that have helped scientists sharpen their picture of the distant past. SUE’s bones (250 of 380, making this specimen the most complete T. rex ever unearthed) have helped researchers understand the creature’s biology and behavior, but the nearby fossils have yielded other insights—among them clues about the foliage that SUE peeked through and trampled each day. “We’re able to reconstruct this environment in an intense and layered way because the fossil record is so good,” says Meredith Whitfield, an exhibition developer at the Field Museum. As of this month, one of those layers involves a whiff of what the Cretaceous may have smelled like.

When the museum set out to reimagine SUE’s display—which reopened in 2018, after relocating from the main hall to a second-floor gallery—the goal was “to make people feel as much as possible as if SUE is in the room with them,” Whitfield says. Accordingly, the new exhibit engages several senses. One interactive display invites visitors to place their elbows on a table and touch their cheekbones as sound waves travel through, mimicking the sensation of the low-frequency rumble of a 40-foot-long predator stamping by. And then there’s the smell. “Scent is an unexpected way to bring an environment to life,” Whitfield says.

To make the smell of the Cretaceous vivid, the team settled on trying to simulate four smells, from the trees in the forest to the gnarly stench of dinosaur breath. To pull it off, they used paleontological knowledge, modern chemicals, and a whole lot of fiddling. As anyone who has wandered a forest knows, the smell of it all—the nose-prickling pine, the softer scent of flowers in bloom—is a distinct part of the experience. So the team had to first figure out which living plants were most similar to what would have grown around SUE and its fellow dinos.

“End-Cretaceous floras are pretty similar to a hardwood-dominated swampland today,” says Az Klymiuk, the museum’s collections manager of paleobotany. On the basis of fossils, scientists know, for example, that there were ponds covered with thick mats of Cobbania, a plant similar to living water lettuce, with floating, rosette-forming leaves. On land there was probably broad-leaved forest stippled with some conifers like cypresses and redwoods. The prehistoric record also includes leaves from the genus of the modern tulip tree, Liriodendron tulipifera. “I think of Hell Creek being similar to [present-day] Northern Florida or South Carolina,” Klymiuk says. “It’s not an alien landscape at all.”

So the paleobotanist came on board to help point the team toward modern smell analogues for Cretaceous flora. Chemically, “plant scents don’t change very much,” Klymiuk says. Once the team had some ideas of modern plant scents to work off of, and decided on ginger root, cypress resin, and the flowers of a tulip tree, the detective work and custom tinkering began.

Whitfield is a Tennessee native, but as far as she can recall, she’d never taken a whiff of the tulip tree, the official state tree, and one of the scents the team had agreed on as a good candidate. So in May 2019, when the Chicago Botanic Garden had one in bloom, she went on what she calls a “sniffing expedition.” Compared to other flowering trees, Whitfield says, “it smells a little greener, more like wet cucumbers or grass.”

The group spent the rest of the summer concocting and fine-tuning. The team wanted scents that were long-lasting and wouldn’t need constant top-offs, but some first attempts were a little too cloying or perfume-y, with too many notes. “One of the cypress ones smelled a little too vanilla-y, and we said, ‘We’re looking for straight-up one thing—plain cypress,’” Whitfield recalls.

Pinpointing other smells of the period was less like perfumery and more like a test of olfactory endurance. But that’s what you get when you sign up to simulate the smell of a giant predator. They quickly gave up on imitating T. rex poop. Most of the commercially available synthetic feces scents are imitations of human waste, and our generally omnivorous diets stray too far from SUE’s carnivory. Cat poop is slightly better, because they’re obligate carnivores, Whitfield says, but hyena droppings would be ideal, because that includes both chewed-up meat and ground bones, just like SUE’s deuces. Turns out synthetic hyena poop scent is hard to come by, so the team moved on. (But, Whitfield adds, “If you’re at the hyena enclosure at the zoo and smell their poop, that’s probably close to what T. rex poop smelled like.”)

Dino breath, on the other hand, was both tempting and feasible. “From anatomical studies of SUE’s teeth, we can say, ‘Well, you have the kind of anatomy that might suggest that you have some nasty raw meat decaying in your mouth,’” Whitfield says. “What did that smell like? The answer is: Bad.”

The team found a service that manufactures a range of prepackaged smells—mainly pleasant air fresheners for hotel lobbies and other benign places, but also stinky ones for police training exercises, so that officers can learn to detect stuff like meth labs, decomposing bodies, and other malodorous things. The one called “decaying flesh” fit the bill quite nicely—but the challenge for the design team was making sure the smell didn’t clear the exhibit with its foulness or make visitors retch when they caught a whiff. “One of the variants was so bad that I said, ‘This is probably really accurate, but I don’t think we can expose visitors to this,’” Whitfield says. The goal was to find “the line between, ‘This is gross and I can experience it being gross and then walk away,’ versus ‘It’s so gross that it’s making me physically sick.’” So they diluted, and diluted some more. Members’ nights gave the team a chance to see how the smells were landing before the galleries reopened to the public, so they could settle on a dilution that “got it across without whacking you in the face,” Whitfield says.

The smells are presented as oils stashed in little cylinders. They waft continuously, but are only detectable when visitors open little grilles that sit on top. Some of the final smells may conjure the assemblage under your sink. “Cypress is kind of a resin-ness that people would associate with pine—it smells a little like Pine-Sol,” Whitfield says. The ginger root scent evokes Lemon Pledge. The breath, on the other hand, smells like rotting meat, and has Klymiuk’s stamp of authenticity. There’s no reason to think that bacteria’s basic metabolic functions have changed much over time, they say, which means that “I have no doubt that rotting meat today smells like rotting meat in the past.”

Chatting with people wandering exhibits or attending public education events, Klymiuk often hears a similar refrain: that the Cretacous seems a little “too normal,” as if we might expect a 67-million-year-old forest to look and smell radically different from one today. The similarity can be hard to process. It can be uncomfortable to think about long-vanished creatures existing in a world that’s not so unlike ours. Imagining an otherworldly landscape, instead, “gives us comfort and keeps us at a distance,” Klymiuk says.

Klymiuk doesn’t think this discomfort is a bad thing. By making the past immediate and accessible, they hope that visitors will “think a little more about the world we’re in and how fragile it is”—how many birds are disappearing, how many tree species are struggling. “It’s eye-opening to see what is essentially a modern forest that you could walk out into tomorrow and stick a Tyrannosaurus into.”

A high-profile T. rex sale is a reminder that paleontologists get stressed when fossils vanish into private hands.
natural history museums

Including welding skills, knowledge of anatomy, and infinite patience.
museums