For Sale: The Only Bar in a 14-Person Montana Town - Gastro Obscura
Want to see fewer ads? Become a Member. 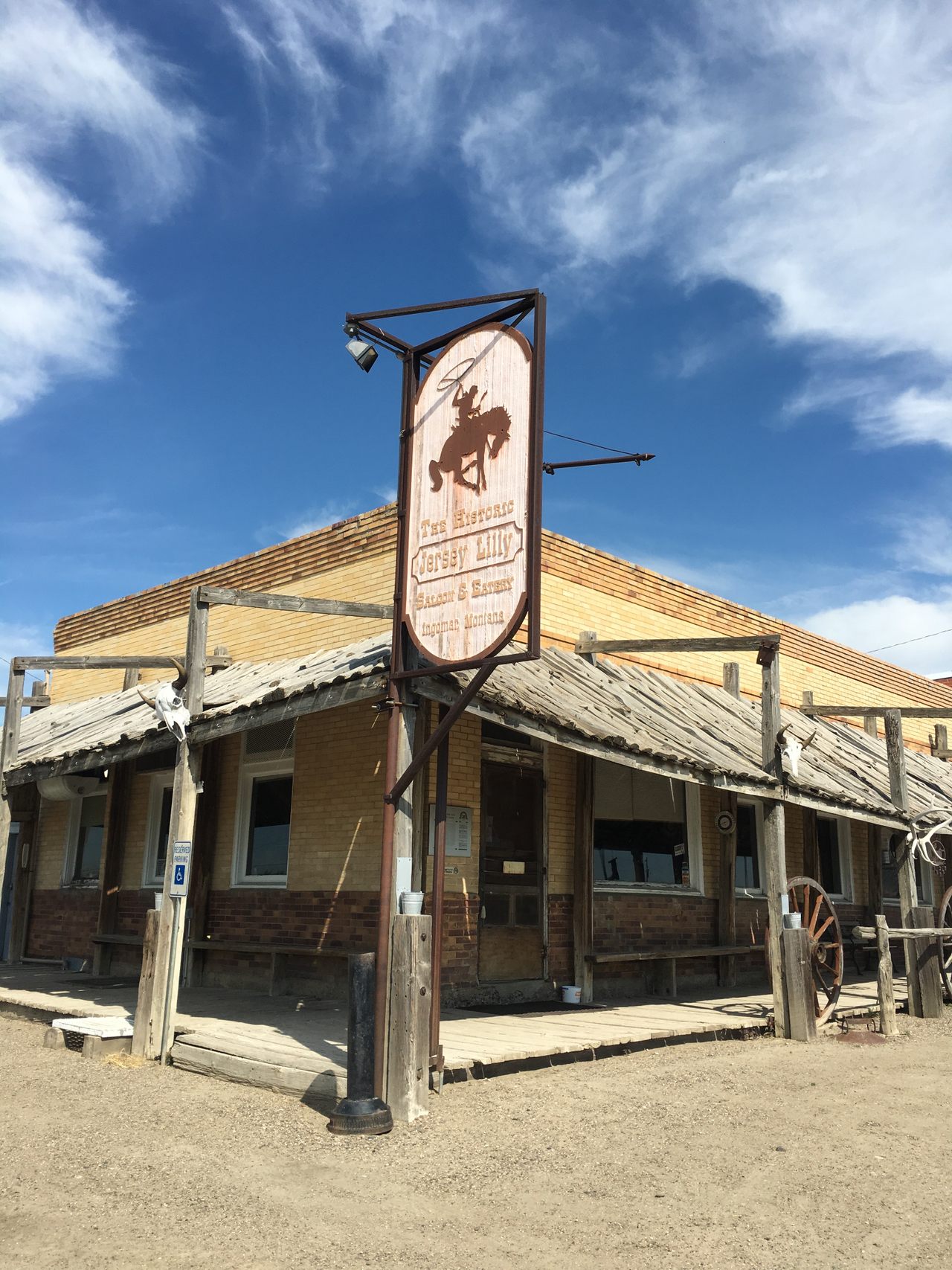 The historic bar has been a meeting point for area cowhands and sheepherders for nearly a century. winegirl834/used with permission
In This Story
Destination Guide

If you buy the Jersey Lilly, you’ll own the biggest business in the town of Ingomar, Montana. That’s because it is, in fact, the only business in Ingomar. You’ll also be the town’s 14th resident.

The century-old building has survived two World Wars, the Great Depression, and a fire that nearly wiped Ingomar off the map. Owners June Nygren and Boots Kope will be damned if they have to shutter its doors because no one can pony up the $225,000 for this historic bar. “I’m just hoping somebody will say, ‘You know what, I wanna be away from it all.’ This is a spectacular place to do that,” says Nygren. The nearest town, Forsyth, is “only” 44 miles away. “That’s really close in Montana, trust me.”

The Jersey Lilly was the town’s first brick building, built in 1914 as the first bank of a very different Ingomar. Once a major hub of sheep-shearing, Ingomar exported 2 million pounds of wool annually, employing and housing an unthinkable 600 residents. A lightning fire in 1921 razed every building in the promising yet flammable frontier town, except the brick-built bank. The ensuing Great Depression quickly shuttered the only surviving business, scattering the remainder of Ingomar’s residents to the winds of the Great Plains until only a handful of sheepherders remained.

Perhaps no town needed a drink after Prohibition more than Ingomar. In 1933, the abandoned bank reopened as the Oasis Bar. It still had the original pressed tin ceilings, bank vaults, and cement outlines from the bank-teller windows, but a dazzling new cherry-wood back bar made it a refined watering hole. Shipped up the Missouri River from St. Louis, the fixture was scratched up a bit in the truck bed of a Model T on its way to Ingomar, but it still frames the bar to this day. “I could sit and look at that piece of wood for hours,” says Nygren.

Local rumor has it that a Texas man named Bob Seward won the Oasis Bar in a game of poker. That’s when the only bar in town came into a character all its own.

Seward renamed the bar “Jersey Lilly,” after the famously buxom 19th-century British film star. He brought a bean soup (not chili) recipe from Texas that is still served. “Our beans are very special. Internationally famous, they are,” Bob’s son Bill told David Isay in an interview for Holding On, a photo-book that pays tribute to the unsung heroes of America’s working class. (Photographer Harvey Wang recalls his first impression of Ingomar over the phone: “I’d never seen tumbleweed before, but there was literally tumbleweed blowing all through town.”) When pressed for the secret to the signature bean recipe, Nygren says, “If I told ya, I’d have to kill ya! Just kidding. It’s the secret spices.” Whatever’s in it, the Jersey Lillly today goes through 1,200 pounds of pinto beans annually.

As bar steward, Bill Seward developed a singular snack that met the needs of the town’s sheepherders. Sheepherder’s Hors D’Oeuvres—a pile of saltine crackers, cheddar cheese, orange slices, and raw onion—stay fresh without refrigeration. “You stick it all in your mouth one bite, just like an old hound dog eating hot cakes,” Seward told Isay. “Don’t taste a thing like you thought it would, do it?” The orange takes the edge off of the onion, making for a somehow inimitable flavor profile. “People who go home and try to make it get so angry because they don’t taste the same,” says Nygren. “You have to come in here to eat them. I don’t know what it is.”

The bar slowly amassed mounted game heads and antlers as hunting grew popular in the region. Today, a stuffed jackalope mounts the cherrywood barback, and a moose head hangs with a cigarette in his mouth (“I shot him when he stopped for a smoke,” Bill would famously tell guests). Nygren’s favorite is a buffalo head that keeps watch over the bar’s recently defunct telephone booth. “He was raised by the former owner, but got mean and they had to put him down,” she says. “Now I decorate him for every holiday.” He recently exchanged a Pilgrim top hat for an undersized Santa hat.

As the only social venue in town for nearly a century, the Jersey Lilly has hosted countless birthday parties, graduation parties, weddings, and anniversaries for area residents. (Nygren refers to anyone within 100 miles as a “local.”) The Bill Seward Thanksgiving Day Feast hosts Great Plains sheepherders and cowhands who have nowhere to go for the holiday. They also host an annual British Tea Party, where Montanans flock to the bar to sip tea and eat cucumber sandwiches in Victorian garb.

“You wanna hear the biggest part of its charm, Mr. Big City?” Nygren asks me over the phone. “Our public restrooms are outhouses—last place in the state of Montana that still has them.” Indeed, there’s no indoor plumbing other than the sinks, she tells me, and their spot on the National Register of Historic Places shields the historic latrines, today labelled “Heifer Pen” and “Bull Pen,” respectively.

Deaf to the cacophony of the modern world, the streets of Ingomar remain unpaved, the only bar in town standing idly by. “It’s a step back in time. It’s a place where cowboys still exist,” says Nygren. “They come in and tie their horses up out front just like in the movies.” The bar has been on the market for several years now, and if no one purchases the bar, the story of the Jersey Lilly will sadly come to an end. (Though Nygren and Kope will be able to spend the holidays with their families again.) If someone does buy the bar, however, Nygren promises the bean soup recipe will come free.

Feline fans flock to the Bag of Nails, to the surprise of the owner.
bars

It's now a monument to a forgotten campaign against alcohol.
architecture

The rosy-hued house in Louisville, Kentucky, could be yours.
bars

How Prohibition Tossed a Wet Blanket on America’s Inventors

The oldest continuously-operating Chinese restaurant in the United States has been in business since 1911.
Great Falls, Montana

"Polynesia on the Plains."
Genoa, Nevada