Americans Have Planted So Much Corn That It's Changing the Weather - Gastro Obscura
Want to see fewer ads? Become a Member. 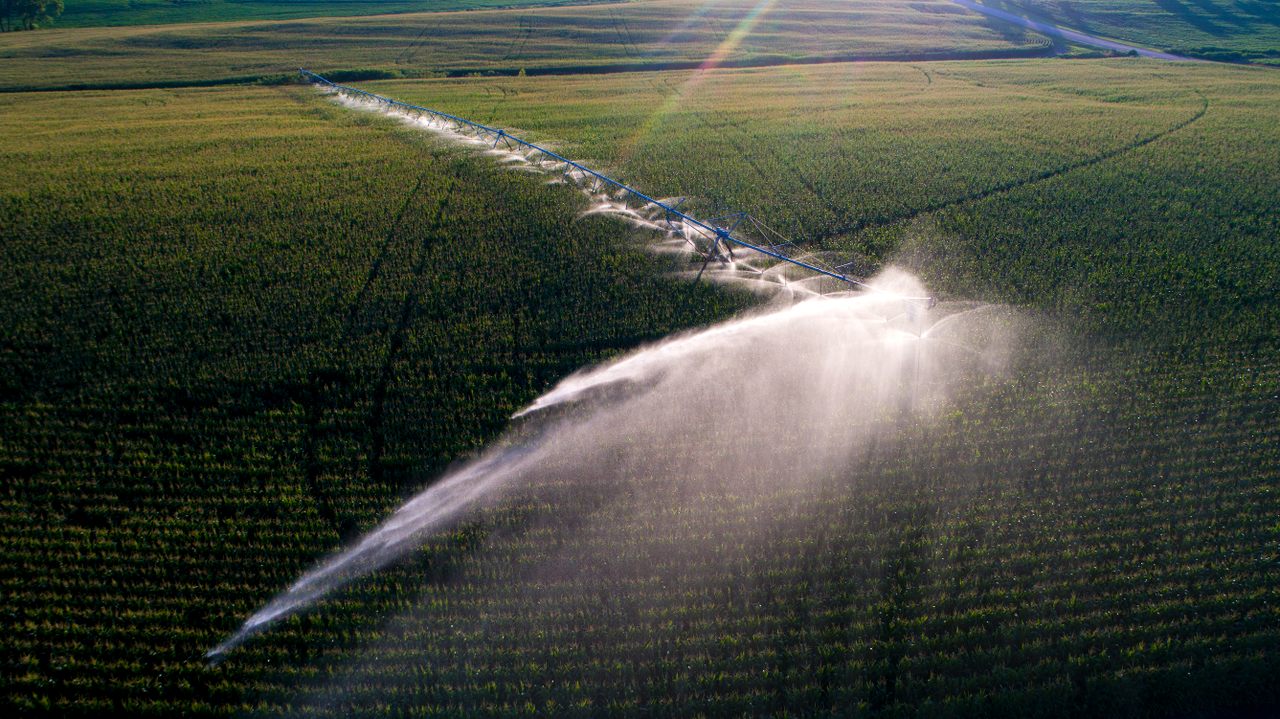 Corn farmers in eastern Nebraska have long claimed weather patterns are changing, but in an unexpected way.

“It’s something I’ve talked about with my dad and grandad many times,” says fifth-generation corn farmer Brandon Hunnicutt. Along with his father and brother, the 45-year-old lives in the 400-person village of Giltner and grows about 2,000 acres of corn each year. From above, the area looks like a blip of homes surrounded by an expansive grid of circular fields. Though Brandon’s grandfather is retired, he takes an active interest in the business. “Contrary to what you’d think should be happening, both him and my dad swear up and down [that] droughts used to come more often and be a lot worse,” says Hunnicutt. “Considering it’s been 30 years since we had a really bad one, I’ve started kind of taking them at their word.”

This is not the only noticeable development—University of Nebraska climatologists say the growing season has gotten 10-14 days longer since 1980. Hunnicutt now waits until the first weeks of November to pilot his 40-foot-wide, dump-truck-sized combine through the farm’s widely arching, seemingly endless rows of corn—enough to cover 800 city blocks.

Though subtle, the Hunnicutts have noticed these changes and more.

“To be successful in this business, you’ve got to pay close attention to the weather,” explains Brandon. In the past 20 years, on top of the above, he’s noted a gradual decrease in 100-degree days during the summer. “That missing digit isn’t something you overlook,” he asserts with a laugh. “High temperatures create a lot of anxiety. If they go on long enough, they’ll scorch your corn and put a hurtin’ on your bottom line!”

A 2018 report issued by climate researchers at the Massachusetts Institute of Technology claims to have solved the mystery and verified farmers’ suspicions: Namely, that large-scale corn production has changed the weather.

Over the past 70 years, farmers in America’s midwestern Corn Belt have made vast leaps in production. From 1950 to 2010, annual harvests increased by more than 400 percent, jumping from 2 billion to 10 billion bushels. In addition to making the area the world’s most productive agricultural region, climate scientists at MIT say the boom has created its own weather patterns.

“What makes these findings so fascinating is that, while global temperatures have risen, areas like eastern Nebraska have actually cooled,” says former MIT researcher Ross E. Alter, now a research meteorologist with the U.S. Army Corps of Engineers. Alter was the lead author of a 2018 report published the journal of the American Geophysical Union that demonstrated how land use impacted the region’s climate more than greenhouse gas emissions. “We think it’s likely heavy agriculture counteracted rising summer temperatures that might have otherwise resulted from increasing greenhouse gases.”

In other words, the man-made shift has been helpful. By increasing yields, farmers have unintentionally created weather patterns that seem to be protecting their crops and helping them grow more corn. (Of course, burning fossil fuels to plant, cultivate, harvest, process, and ship farm products has been shown to be a major contributor to rising levels of greenhouse gases.)

Though similar effects have to some degree been observed in the rice-growing regions of eastern China, the report marks the first time the effects of agriculture on regional climate change in the central U.S. have undergone comprehensive analysis. The findings document the most significant man-made regional climate shift in world history.

“On a global level, this research is important because it proves the influence of agricultural intensification is really an independent problem from greenhouse gas emissions,” explains Alter.

By comparing observed historical trends in the Corn Belt’s climate to those predicted by a variety of global simulations used by the World Climate Research Program, which coordinates climate research sponsored by various international organizations, the report showed the models were inaccurate for the region (they predicted summer temperatures would rise and rainfall would increase by just four percent). Though the WCRP models accounted for greenhouse gas emissions and other human and natural factors, they did not consider agricultural intensification.

“Our findings are a bit different from what people thought about the mechanisms of climate change,” says Alter. He believes that accurately simulating and understanding climate change at the local level will require a look at cases of agricultural intensification like Nebraska’s corn boom.

On one hand, it has to do with what Hunnicutt and other farmers refer to as “corn sweat.” This happens when photosynthesis boosts the amount of water vapor in the air.

“When a plant’s pores, called stomata, open to allow carbon dioxide to enter, they simultaneously allow water to escape,” writes Kimberly Hickok, who covers climate change for Science Magazine and reviewed the report. Known as transpiration, the process cools the plant and surrounding air, and increases the amount of water going into the atmosphere and returning as rainfall. As Hickok notes, “the cycle may continue” as that additional rainwater evaporates back into the atmosphere and causes rainfall on other farms and towns downwind.

Put another way: More corn means more transpiration. Which, in turn, produces slightly cooler temperatures and increased precipitation. The fact that corn is a non-native species boosts the effect.

“The predominant native vegetation in central and eastern Nebraska is grass,” explains Dutcher. Farmers have replaced the area’s vast seas of grass with more than nine million acres of corn, which transpires at a rate 20 percent higher than indigenous grasses. “Agriculture is literally funneling moisture into the atmosphere, and all that humidity has created a kind of protective bubble against rising temperatures.”

Dutcher and Hunnicutt say growing more corn—and thus, creating more transpiration—would have been impossible without advances in farming efficiency. The introduction of high-yielding varieties, better irrigation, and soil management techniques, along with the ability to use computer sensors to closely monitor field conditions, have all contributed to soaring yields.

“One of the biggest factors is the widespread use of cover crops, crop residue management, and no-till farming methods,” writes University of Nebraska-Lincoln Institute of Agriculture and Natural Resources extension engineer Paul Jasa. Together, the practices have erased the need for conventional tillage, dramatically increased organic matter in the soil, reduced evaporation and runoff, and lowered summer surface temperatures. “With time, the [native clay-based] soil has become much healthier and better at retaining water,” Jasa continues. “This has made crops more resilient to traumatic weather events and, in general, much more productive.”

Hunnicutt says automated irrigation has helped boost overall production and allowed him to grow corn in pivot corners where his grandfather could not. Upward of 340 acres that formerly yielded nothing now contribute as much as 180 bushels per acre. In his tenure as a farmer, full-field yields have grown by more than 50 bushels an acre.

“I can get minute-to-minute weather predictions and tell you moisture levels anywhere in our fields just by glancing at my phone,” says Hunnicutt. “In the 1950s, my grandad was using a Farmers’ Almanac. Back then, if they thought the soil was too dry, they just dumped water on it. Now, I know exactly what my plants need and when to apply it.”

As might be expected, Alter’s report has a dark side. And that dark side has global implications.

“In terms of the Corn Belt, the degree of agricultural intensification we’ve seen in the last 30 years isn’t sustainable,” he says. “It’s projected to soon come to an end and may even decline.” And if that happens, the mitigating effect of agriculture will disappear, and global temperatures will rise even faster.

Though studies have yet to be conducted around the world, Alter says that areas that have experienced substantial agricultural intensification have likely experienced similar benefits: more rainfall and cooler average temperatures during the summers. Like Nebraska, the effects have probably masked negative changes and will eventually be overwhelmed.

“I know some of the anti-climate change folks will probably poo-poo this, but it’s something my family takes very seriously,” says Hunnicutt. “We’ve been in this business for five generations, and I hope to see my children and grandchildren carry on that tradition. We’re doing everything we can to reduce fuel consumption and increase efficiency. Our hope is these [mitigatory effects] will give us enough of a window to make adjustments and prepare for what’s coming.”

In the meantime, he hopes the world gets its act together and curbs emissions before it’s too late.

*Update 12/11/18: This post has been updated to include more detail on the data used by researchers.

How one of the country's favorite apples went from pint-sized to pound-sized.
science

A past global staple you've never heard of, maslins are poised for a comeback.
caves

Patterns in 1,000-year-old stalagmite formation connect the fall of empires, kingdoms, and industries to long and deadly dry periods.
science

It may be the key to cutting down 7,800 metric tons of annual carbon emissions.
Video • PinDrop

Inside this magical collection, you can buy recipes cooked up by church ladies, motorcycle clubs, and clowns.
Hastings, Nebraska

The home for all things Kool-Aid offers everything except a chance to actually enjoy the drink.
Condom, France