In England, Coroners Decide What Is Treasure and What Is Not - Atlas Obscura
Want to see fewer ads? Become a Member. 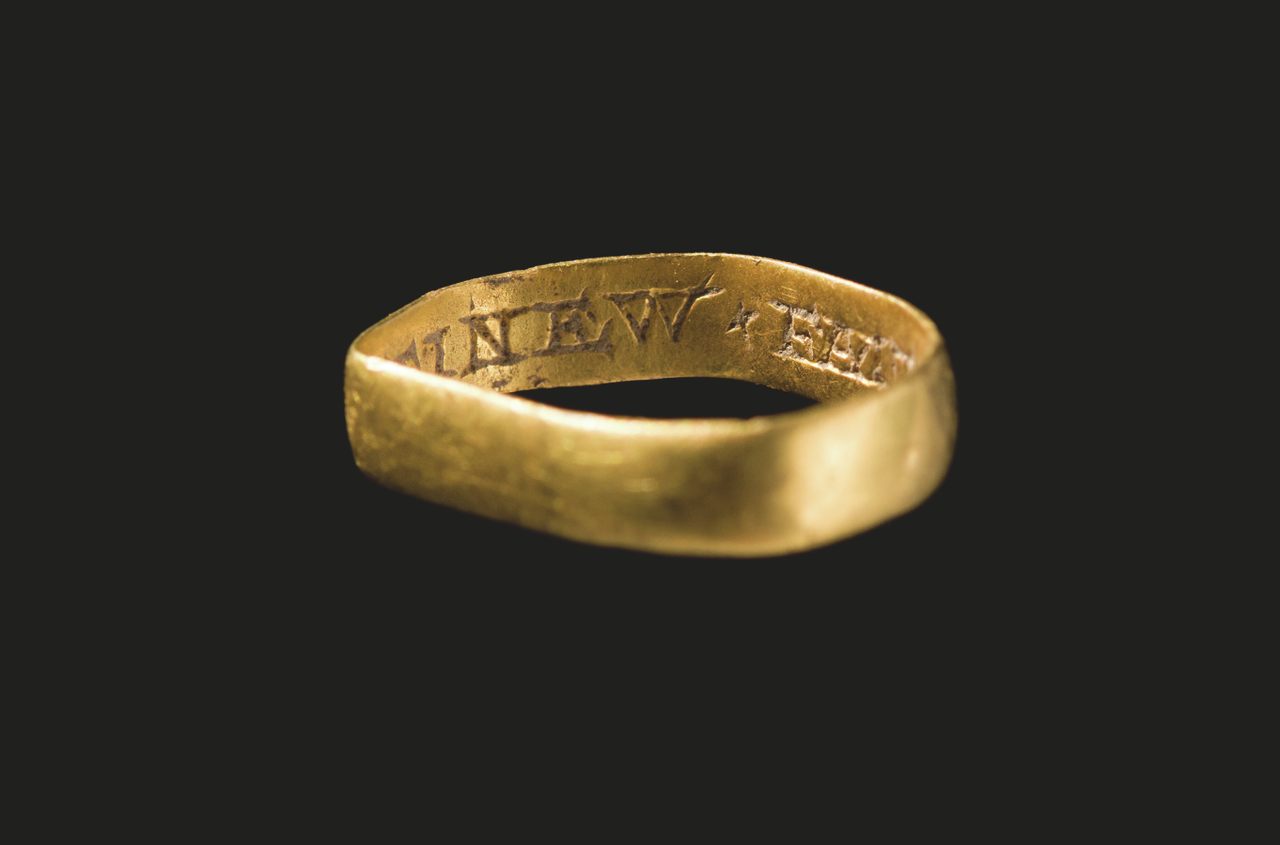 A 17th-century gold posy ring, a postmedieval version of a promise ring, was determined to be treasure at an inquest in October 2019. © Amgueddfa Cymru – National Museum of Wales
In This Story
Destination Guide

The famous grave ship of Sutton Hoo was found, undisturbed, in a mound in East Anglia, England, in the 1930s. One of the most spectacular finds in the history of English archaeology, the burial contained no body, but was loaded with artifacts made of gold, silver, and bronze, from Byzantine silverware to a literally double-edged sword. The find is priceless beyond measure, but one thing it is decidedly not is “treasure.” At least that’s what a local coroner—following seven centuries of precedent—officially determined.

There’s a lot of history in England, and much of it still lies under the earth. Centuries-old objects turn up from under pastures in Sussex and wash up on the banks of the Thames in central London. Defining some of these objects as “treasure” has historically provided a source of revenue for the kingdom, and today it is a vital step in ensuring the preservation of the country’s cultural heritage. But through it all, the duty of declaring which uncovered objects make the cut has always fallen to the same people—coroners, the same ones who are responsible for determining causes of death.

In 1194, Richard the Lionheart’s England was financially strapped by the Crusades abroad and a suite of issues at home. The kingdom was in want of a bureaucratic upgrade if it was to survive. Few people were more qualified to orchestrate this managerial makeover than Walter Hubert, the Archbishop of Canterbury. Among the rules Hubert outlined in his Articles of Eyre was a new sort of county officer, one who could help settle local matters and, in the process, ensure a steady flow of revenue into the crown’s coffers. Hubert invented something called a coroner.

“The etymology of the word coroner comes from ‘crown’ and ‘crowner,’ and for centuries, they’ve been the crown’s representative in the regions,” says Ian Richardson, the Treasure Registrar at the British Museum, which today houses the finds from Sutton Hoo. In medieval rural England, coroners were the crown incarnate. They organized local juries and supervised county elections, looked into premature or suspicious deaths, and seized the assets of those who died with no clear heirs.

“The modern role is almost entirely focused on the investigation of deaths, but at the time revenue control was part of that,” says Matthew Lockwood, a historian at the University of Alabama and an expert in early British history, who wrote his dissertation on the coroner’s role in British life. “The responsibility for investigating treasure and wreck of the sea goes sort of hand-in-hand with the investigation of death.

“Some of the early broader roles are sort of swept away,” Lockwood adds, “so we’re left with treasure trove and investigating untimely deaths.” It is still up to coroners—who weren’t particularly associated with having medical knowledge until the 1800s—to distinguish between deaths accidental, natural, and foul, and to distinguish between trinket and treasure.

“It’s very obscure,” Lockwood says, “but at the same time it’s a bizarre holdover from a previous age that doesn’t seem like it should exist in the modern age, but it does.”

What is treasure and what is not was a significant distinction as far back as the Roman Empire, when treasure was defined, rather specifically, as a horde of money that has been buried so long an owner cannot be identified. It has been a subject of English law as far back as Edward the Confessor, who reigned in the early 11th century. And today, naming something as treasure still carries profound implications.

“Prior to [1996], it was very loose and in order for something to be classed as ‘treasure trove,’ a find had to be predominantly gold and silver. Its original owners had to be unknown, but it also had to be buried with the intention of future recovery,” says Richardson, who sorts though hundreds of treasure inquiries each year passed to him by local municipalities. “It means that in practice the majority of things classed as ‘treasure trove’ were coin hoards, obviously put in the ground by people with the hopes of recovering later and they never did.”

England is rife with plenty of coins, swords, and other valuables that had been deliberately buried. “It seems like that would be a rare thing, but burying goods is a primary way of keeping those things safe, especially in times of crisis,” says Lockwood. “Of course, it isn’t treasure because it’s not precious metal, but Samuel Pepys, the diarist, famously buried his wheel of parmesan cheese during the Great Fire of London.”

Today, law-abiding English treasure hunters (mostly metal detectorists) must first report any find to the local coroner within 14 days of discovery. The coroner then determines, with the help of a finds liaison officer, whether the find is a treasure trove or not. If it is not determined to be treasure, finders-keepers, and the object can be reported to the Portable Antiquities Scheme, which helps the country keep track of where and what was found. But if it is treasure, it is subject to the the 1996 Treasure Act, which states that it is national heritage and must be offered for sale to a museum at a price set by an independent board of experts. Richardson’s office helps determine whether a museum will be interested in certain finds. If no museum wants to pay up, the crown—which technically owns any treasure—disclaims it, and it is returned to the finder or landowner.

“It’s much encouraged for the local museum to acquire the find,” Richardson says. “Because the British Museum has a lot. It can have a bigger impact locally.”

The Treasure Act also loosened the previous definition of treasure—the one that decided the non-treasure fate of the Sutton Hoo finds. (After failing to meet the treasure requirement, Sutton Hoo was at the mercy of the landowner, Edith Pretty. Thankfully, she donated the entire find to the British Museum.)

“Only a very small percentage of my work involves treasure—less than five percent,” says Andrew Haight, the coroner for South Staffordshire, a district outside of Birmingham, via email. “Typically the areas where England was invaded have more treasure finds—mainly Norfolk, Suffolk, and Essex (East Anglia) and the Coroners for those areas probably spend more time on treasure (but still a modest percentage of their workload).”

In England and Wales today, treasure is any object that is at least 10 percent precious metal by weight and over 300 years old, in addition to a few other criteria, such as objects found alongside treasure. Pepys’s cheese, if found today, would only meet one criteria—so it would not be treasure. (It is still at large, buried somewhere under modern London.) But the new legislation saw no need to change the role of the coroner—one they had filled for 802 years at that point.

“When they modernized the law in 1996, they said, ‘Well, it still makes sense for the coroner to have a role,’” Richardson says. “For us it’s useful, because the coroner does have some legal authority and they can summon people to attend court. If a finder is reluctant to hand over a find, they can be summoned. If they don’t, they can be held in contempt of court.”

This all makes the coroner the arbiter of what treasure hunters get to keep and what could end up in public museum collections. And the rules apply to archaeologists as well as amateurs. “[The Treasure Act] was seen as a way to rein in metal detectorists,” says Richardson. “This was [also] a way to show them that everyone was being treated equally, that archaeologists had to report their finds as well.”

Richardson wishes archaeologists didn’t have to do this, since their extensive documentation just adds to the already sizable docket on the treasure desk. Both coroners and museum officials have felt the impact of the law.

“Under the old law, there were only about 25 finds of treasure trove annually,” across the country, Richardson says. “We thought it’d expand by 10-fold. But in 2017, and it looks like it’ll be the same this year as well, there were over 1,200 cases of treasure trove in England.” And all of those have go across a coroner’s table.

“If people had to report their copper alloy finds,” on top of the more precious ones, Richardson jokes, “we’d probably have to close the whole thing down.”

The quantity of finds is high, as is the seriousness with which coroners fulfill their duties. Most of the time, this involves reviewing the analysis of the finds liaison officer, who is tasked with the report that the coroner ultimately signs off on in a legally binding treasure inquest.

“I do feel privileged to be a Senior Coroner and I endeavor to perform my role properly,” Haight says. “In particular with treasure cases, they do tend to be enjoyable … which of course is very different to death cases.”

The Surprising Complexity of an Unfinished American Quilt

The United Kingdom is experiencing a revival of interest in an ancient burial method.
lakes

The centuries-old offering was nestled inside an underwater stone box.
ships

The maritime tomb in Norway is the first of its kind to be excavated in a century.
archaeology

A guide to scouting for humble treasures on the shore of the Thames.
Video • Wonder From Home