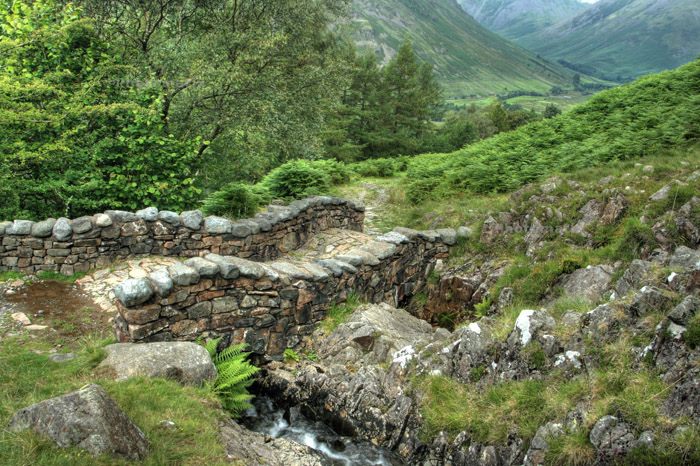 Corpse road between Wasdale & Eskdale in England's Lake District. alancleaver/CC BY 2.0
In This Story
Destination Guide

Funerals in the Middle Ages were very DIY. Not only did you personally tend to your loved one’s decomposing corpse, you had to carry it all the way to the churchyard. And for many medieval Europeans, that could be quite a journey.

Churches at the time were very protective of their flocks, both living and dead. When a parishioner died, they wanted him or her interred with all the rituals of the parish church. They also wanted the money that having those burial rights entailed. Yet as communities spread out, this meant the parish church could be miles from your home. Thus came the corpse road, also known as the coffin road, bier way, church way, lych way, or burial road. All these paths connected villages to the cemetery.

While many of these roads have disappeared, either through development or their names being lost over the years, some remain, across the United Kingdom and the Netherlands. An Old Corpse Road still connects the Swindale Head with Mardale in England’s Lake District. One reason that some of these somber byways survived over the centuries was their remoteness. No one wanted rotting bodies hauled through their front yards, so the roads were set up on windswept hills and overgrown pastures where no one wanted to go.

There was also a wealth of superstition that guided the design of the corpse roads, which helps makes them identifiable today. According to a 1977 article in New Scientist, the dead “were carried along strictly defined corpse roads for the belief was that coffins sterilized the land because the dead were forced to walk that way until their souls were purged.” The roads proceeded right through the terrain, even if a river stood in its way, as many believed spirits traveled in straight lines. As Puck utters in Shakespeare’s Midsummer Night’s Dream: “Now it is the time of night, / That the graves all gaping wide, / Every one lets forth his sprite, / In the church-way paths to glide.”

Ghost stories still linger over corpse roads, with supposed sightings of phantom lights in the night. But they don’t need any mythology to make them eerie places. Walking along the roads, you might still see coffin stones where corpses were placed when their carriers needed a rest, or crosses carved in rock. All these paths, of course, ended in the same place: the lych gates of the local church that opened into the cemetery, the end of the road.

It is said the English monarch wore the sleeved waistcoat at his public execution in 1649.
medieval

The Heraldic Rebus, Born in Battle and Embraced by Tudor England, Lives on in Your Smartphone

Expressing your identity in a clever string of images was a thing long before emojis.
farms

The rediscovered medieval complex of Beaubec is unique in all of Ireland—and it's just the most recent layer of history unearthed in a humble pasture.
medieval