Cranberries Are the Only Thanksgiving Food That Actually Came From the United States - Gastro Obscura
Want to see fewer ads? Become a Member. 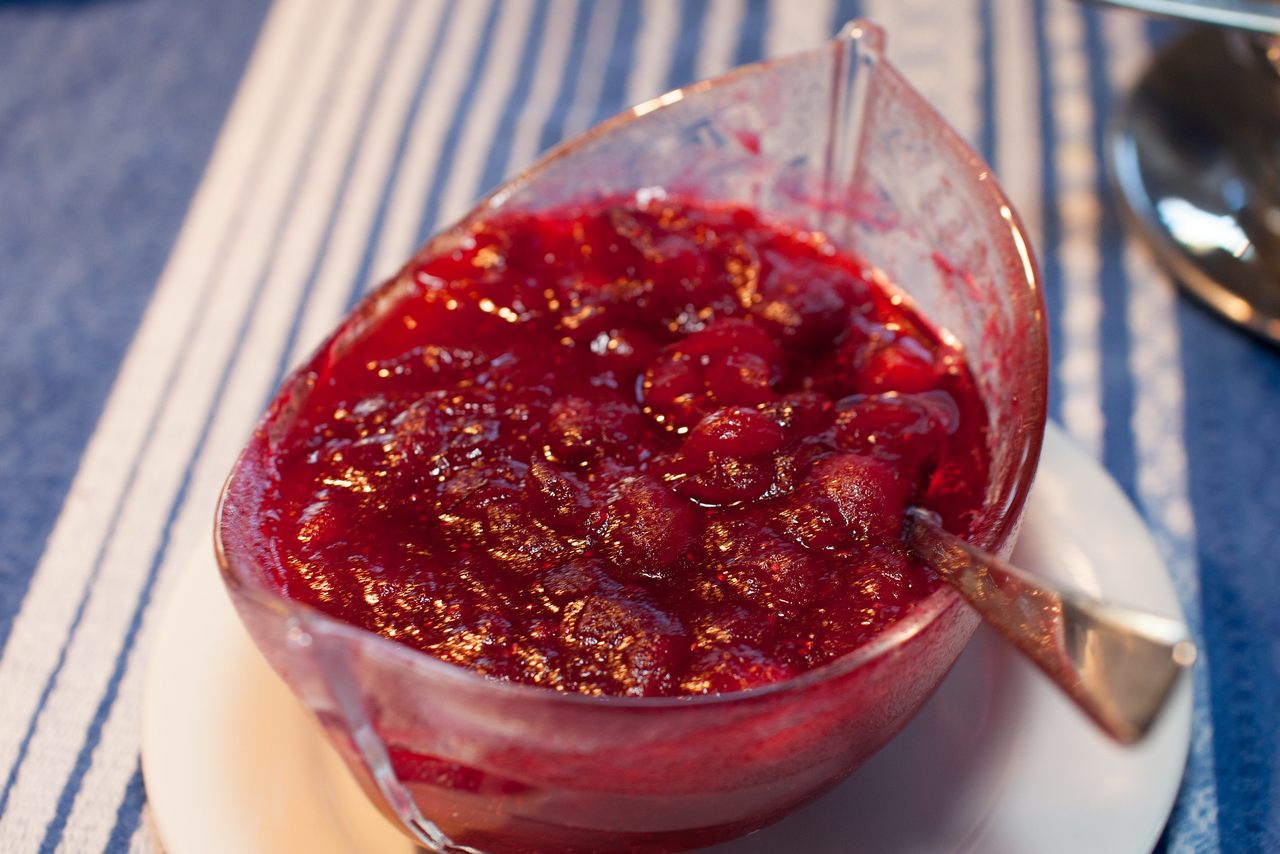 Cranberries are all-American. pinguino k/CC by 2.0

Thanksgiving is all about two things: food and the United States of America. And, by tradition, those two things are supposed to meld into one: at Thanksgiving dinner, the food is supposed to be very American. Turkey. Sweet potatoes. Regular potatoes. Squash, ideally in the form of pumpkin pie, but likely also in the form of soup. Corn, as cornbread or—even better—cornbread stuffing. Cranberries.

Most of that food, though, isn’t actually native to the United States*. Almost every single item came from further south, in Mexico or South America.

In fact, compared to most regions of the world, the 7.66 million square miles of North America that include the U.S. and Canada have blessed humanity with relatively few foodstuffs. Of all of today’s domesticated and widely grown crops, only a scant few have their genetic origins north of the border with Mexico. If Thanksgiving dinner were relegated only to crops that were truly native to the United States, we’d just be eating cranberries, along with the seeds and roots of sunflowers.

The true story of American food dates back centuries before the Pilgrims arrived on the continent. For most of history, the most exciting spots in human civilization on the continent were well south of what’s now the United States. In Mexico and points further south, the Maya, Inca and Aztec empires built cities and pyramids, which meant gathering large numbers of people in one place. “Where populations accumulate, especially in inland sites, you have to feed those populations,” says Ernest Small, a biologist and author of North American Cornucopia. “Or what always happens is that hunting wipes out the local supply of wild game, and you starve.”

The alternative, of course, is agriculture, and people in these southerly climates developed potatoes, corn, squash and beans into plants that excelled at feeding humans. Further north, the population never became quite so dense, and the need for food crops developed much later.

People up north did start cultivating a select few North American plants, like goosefoot and annual marsh elder. Sunflowers, in particular, had all the qualities of a plant that make sense for humans to consume, and they’re the only native American crop that ranks as one of the 50 top foods grown in the world today. But for the most part, people adopted the crops that had already been domesticated to the south: there’s little reason to go through the long, hard labor of developing plants into grain and vegetable-producing machines when it’s possible to obtain extremely productive plants from a neighbor.

Among the 100 truly native North American foods that Small lists in his book, there’s bilberry and cattail, nettles and blue waxweed, something called buffaloberries (which Business Insider reported in 2013 could be the next superfruit) and buffalo gourd. There’s also elder, hawthorne, pokeweed, and the cabbage palmetto, which has a edible part similar to a heart of palm. But when I asked Small if he thought there were any native North American plants that deserved more attention as food than they had gotten, all he came up with, after the caveat that he was a “meat and potatoes” sort of guy, was the prairie turnip (just what it sounds like) and the yampa, another root vegetable.This is not to say that these plants aren’t good to eat or good for you, just that they don’t cater as readily to human tastes as plants that have been developed to do so. However, there is one genre of truly American food that is broadly popular: berries. North America has given us huckleberries, blackberries, blueberries, and cranberries, along with a number of undomesticated varieties.

It’s not uncommon for countries to have so many native berries. “Pretty well everywhere around the world, there are local fruits and berries, and humans have always turned to them,” says Small. “Sometimes you find a bear competing with you, and it’s pretty awkward. But you can eat fruits everywhere, there’s a tremendous variety.” Berries, after all, are designed to be eaten.

Essentially, the only Thanksgiving side dishes that originally came from North America would be cranberry sauce and mashed sunchokes (not exactly a popular side dish, anyway). But what about the centerpiece of the Thanksgiving table, the turkey? Is the turkey out, too?

The turkey is a little bit more complicated. There are two main types of turkeys in the Americas, one native to southern Mexico and one native to northern Mexico and some parts of the United States. There’s some debate about where the turkey was first domesticated. It may have been domesticated first in Mexico, followed by the southwestern United States. But it may also have been domesticated independently, around the same time, in those two places.

There is one strategy to avoid consuming a turkey of foreign origin, though. The eastern part of the U.S. happens to have its own subspecies of turkey, Meleagris gallopavo silvestris, the Eastern wild turkey. So in a Thanksgiving feast of truly American food, among the sunchokes and the cranberries, the turkey can stay—but only if it’s a wild turkey.

*Correction: The headline originally stated that “Cranberries Are the Only Thanksgiving Food That Actually Came From North America.” This and two other “North America” references have been changed to “the United States,” as Mexico, the source of some Thanksgiving foods, is in North America.

How Americans Changed the Meaning of 'Dream'

America’s Most Unique Thanksgiving Side Dishes

5 Recipes From Indigenous Chefs to Add to Your Thanksgiving Spread

From maple-glazed squash to hominy-turkey stew, these dishes celebrate the people and flavors of this land.
Video • Wonder From Home