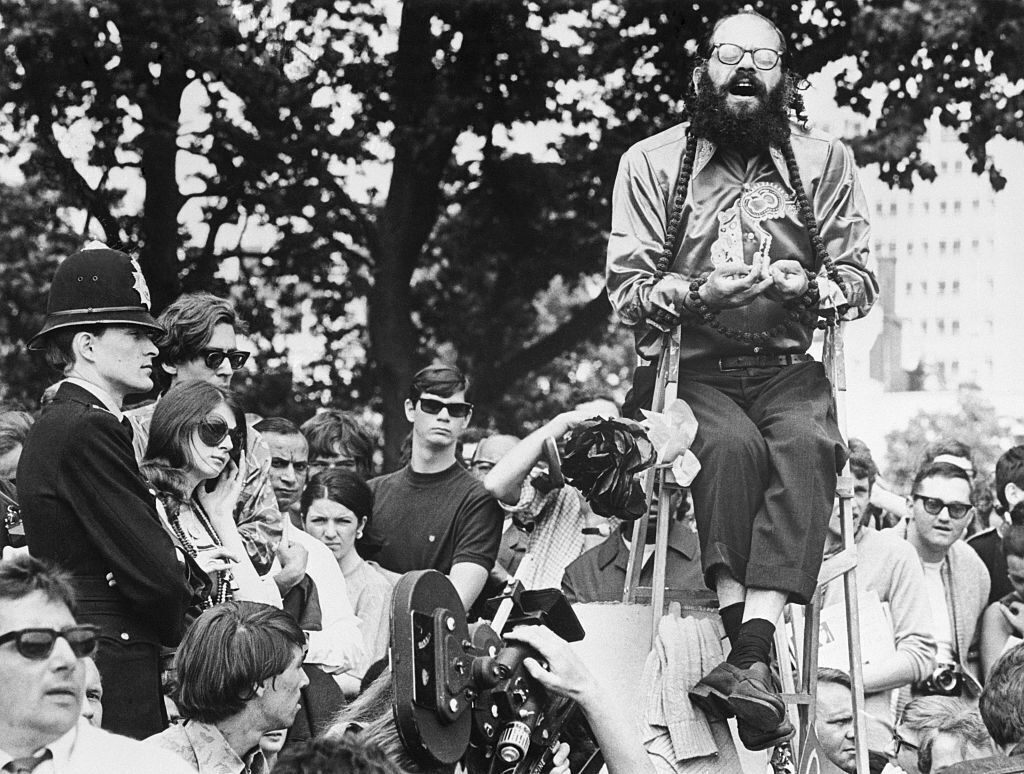 Allen Ginsberg chants in London. Although his reading displays many of the technical attributes of "Poet Voice," it generally doesn't come across that way to listeners. Bettmann/Getty Images

You walk into the bookstore. You sit in your folding chair, or on the floor, with your paper cup of wine. The poet approaches the microphone, affably introduces himself, and maybe cracks a joke. He shuffles his papers, launches into his first verse—and all of a sudden, his voice changes completely! Natural conversational rhythms are replaced by a slow, lilting delivery, like a very boring ocean. Long pauses—so long—hang in the air. Try and get comfortable. There’s no helping it. You’re in for a night of Poet Voice.

Many performance-related professions and avocations have developed an associated “voice”: a set of specific vocal tics or decisions. Taken together, these mannerisms make up a kind of sonic uniform, immediately clueing a listener into who or what they’re listening to. There’s “Newscaster’s Voice,” for example, characterized by a slow cadence and a refusal to drop letters. There is “NPR” or “Podcast Voice”, which the writer Teddy Wayne has diagnosed as a “plague of pregnant pauses and off-kilter pronunciations,” and which radio host Ira Glass once said arose in direct response to those butter-smooth anchors.

And then there’s Poet Voice, scourge of the open mic and the Pulitzer podium alike. Unsurprisingly, poets are the best at describing Poet Voice: Rich Smith, in CityArts, calls it “a precious, lilting cadence,” in which “every other line [ends] on a down note,” and there are “pauses, within sentences, where pauses, need not go.” According to Smith, today’s egregious Poet Voicers include Louise Glück and Natasha Trethewey, whose fantastic poems are obscured, in performance, by this tendency of their authors. “Poet Voice [ruins] everybody’s evening,” he writes. “[It is] a thick cloud of oratorial perfume.”

Marit J. MacArthur has heard her fair share of Poet Voice. As an English professor and scholar, she has been listening to it for years. (Before she heard it called “Poet Voice,” she even developed her own evocative term for it: “monotonous incantation.”) “I just felt like there was a style of poetry reading that I was hearing a lot that sounded highly conventional and stylized,” she says. Although she was annoyed, she was also intrigued: “I became curious about what exactly it was, and why so many people were doing it … I wanted to define it more empirically.”

She started by plumbing the literature, undertaking what she calls “a cultural-historical investigation of where this vocal cliché came from,” and connecting it with both religious ritual and the university’s distaste for the theatrical. “People in academia are just more comfortable with suppression of emotion,” she says. (She collected these insights in a 2016 paper, “Monotony, the Churches of Poetry Reading, and Sound Studies,” published in PMLA, the journal of the Modern Language Association of America.)

But this research left her with more questions. So she decided to go deeper. In a new study published in Cultural Analytics, MacArthur and two colleagues, Georgia Zellou and Lee M. Miller, skipped the human middleman and ran various recorded readings through a rigorous sonic analysis. In other words, they tried to use data to nail down Poet Voice.

For the study, the researchers chose 100 different poets—half born before 1960, and half born after—aiming for “a variety of aesthetic educational backgrounds, as well as some ethnic, racial, class, and sexual diversity,” as they write. They found audio and video clips of these poets reading their own poems by scouring websites like PennSound and Poets.org. Then they took the first 60 seconds of these recordings, first chopping off any introductory chit-chat, as most poets use their “normal” voices for that.

Their final data pool includes everything from Mark Strand incanting “Man and Camel” behind a podium at Skidmore College to Audre Lorde performing “1984” in 1992 while seated in a brightly colored armchair in Berlin. (You can find a list of the poets, as well as their demographic information and links to the readings used, in the paper itself.)

Next, they gathered another set of 60-second snippets, this time from the Buckeye Speech Corpus, which is made up of recordings of native Ohioans talking about “everyday topics such as politics, sports, traffic, [and] schools.” This served as a conversational control group, which the researchers called the “Talkers.” (Although it might have been better to compare each poet’s reading voice with their own conversational style, “It proved challenging to find adequate recordings of some of the 100 poets doing anything other than reading poems,” they write.)

The researchers then fed each of these recordings into a series of algorithms that measured various aspects of pitch and timing. They focused specifically on 12 attributes, ranging from simple metrics, such as reading speed and average pause length, to more complicated ones, including pitch acceleration (“how rapidly the changes in pitch change … which we perceive as the lilt of a voice,” the researchers explain) and “rhythmic complexity of phrases,” which measures how consistently a speaker draws out, or doesn’t draw out, groups of words.

By comparing Poets and Talkers along these lines, the researchers were able to draw two overall conclusions. First, when compared to the Talkers, the poets tended to speak more slowly and stay within a narrower pitch range. Second, very few Talkers indulged in long pauses, but plenty of poets—33 percent—had no trouble leaving their listeners hanging for two seconds or more.

And what about Poet Voice more specifically? MacArthur’s own list of notable culprits includes Michael Ryan and Juliana Spahr, as well as the aforementioned Glück and Trethewey. When the researchers compared these poets’ vocal stats with each other, a set of common attributes emerged. “The pitch range tends to be narrower, but that by itself is not enough,” says MacArthur. “It’s also what you’re doing with your voice within a given pitch range.” Devotees of Poet Voice tend to exhibit slow pitch speed and pitch acceleration: in other words, though the pitch may go up and down over the course of the reading, it’s more rolling hills than rollercoaster. “You could think about it almost as the same melody over and over,” says MacArthur. This contrasts with the more conversational or expressive styles of reading exemplified by, say, Amalia Ortiz or Rae Armantrout.

This is also, perhaps, why it can seem grating or detached: “In a more natural conversational intonation pattern, you vary your pitch for emphasis depending on how you feel about something,” says MacArthur. “In this style of poetry reading, those idiosyncrasies … get subordinated to this repetitive cadence. It doesn’t matter what you’re saying, you just say it in the same way.” Overall, the researchers write, “from this small sample, we would conclude that perhaps when some listeners hear poets read with one or more of these characteristics—slow pitch speed, slow pitch acceleration, narrow pitch range, low rhythmic complexity, and/or slow speaking rate—they hear Poet Voice.”

It’s easy to make fun of Poet Voice. But its proliferation across the space of academic poetry may have more serious implications as well. In a 2014 essay, “Poet Voice and Flock Mentality,” the poet Lisa Marie Basile connects it to an overall lack of diversity in the field, and a fear of breaking the mold. The consistent use of it, she writes, “delivers two messages: I am educated, I am taught, I am part-of a group … I am afraid to tell my own story in my own voice.”

Although MacArthur emphasizes that this study is far too small to draw any major conclusions, some of the researchers’ findings so far seem to support the idea that contemporary poets—especially those from marginalized groups—feel pressure to lean into certain aspects of Poet Voice in order to find success in a landscape dominated by white men. “Female poets as an overgeneralization are getting less expressive, but this doesn’t happen on the male side,” says MacArthur. In addition, “some of our most successful younger African-American female poets are the least expressive” according to this analysis, even as the older African-American female poets in the study were the most expressive as a group.

In a response to the study, literature professor Howard Rambsy II wrote that these findings suggest that “perhaps … low expressiveness in poetry readings is one of the requirements of being a major award-winning black woman poet.” MacArthur agrees: “[The results suggest that] there’s something about assimilation to the mainstream, or just success in the mainstream, that encourages a less expressive style,” she says. “That to me was kind of startling. I think there’s something there to investigate, and I will.”

MacArthur is also working to apply the techniques used in this paper to larger samples, and may expand to other genres of performative speech, like radio dramas or political stumping. “These tools help us figure out, what is it that we’re responding to?” she says. “I think there’s a lot of potential for testing our perceptions of speech that we find entertaining, or boring, or engaging, in ways that are very hard to put a finger on.” If nothing else, it’s something to think about around stanza number four, when you start nodding off.

What Ecologists Can Learn From Memes

Some scientists are studying YouTube comments and trying to go viral.
datapoetrysoundslanguage

Aliens Might Never Appreciate How Cool Voyager's Golden Record Is

If they find it, they may just be confused.
sounds

They start out babbling, and get a lot more eloquent. Sound familiar?
music

The Sweetest Sounds of 2017

From lost languages to rediscovered songs to music made by robots, the year certainly won't go quietly.
Video

Brevity is the soul of wit, but volume is what really gets you noticed.
Read more
Thanks for sharing!