Curious Fact of the Week: The Rat King - Atlas Obscura
Want to see fewer ads? Become a Member.
In This Story
Place

Home to the "Rat King" of Nantes and other wonders of the natural world.

Imagine a horde of rats with their tails twined and tangled, dragging their writhing bodies in one hideous snarled mass of rodents. This folkloric phenomenon of the Rat King goes back to the plague years, when rats were spreading the deadly disease, and a whole nest that lived so close they became inextricably twisted together was a horrible omen of death. 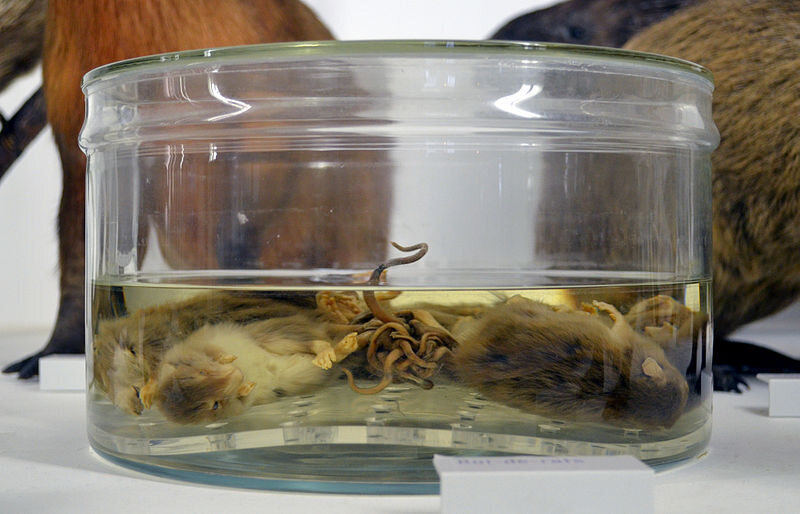 The Rat King of Nantes (via Wikimedia)

Don’t worry, the Rat King is widely believed to be mythical. Yet there are several physical specimens in natural history museums. One is held by the Natural History Museum in Nantes, France, where nine rats with their tails coiled together rest in preservatives. This “roi de rats” was supposedly found in 1986, one of the between 35 and 50 Rat Kings that have been reported in the world. One of the largest “specimens” is kept by the Mauritianum Museum in Altenburg, Germany, and has 32 rats mummified grotesquely together, appearing as if some of the creatures died along the way and continued to be pulled along with the monstrous horde.

This idea of the Rat King is such a viscerally vivid image that its creeped its way into culture, such as with the many-faced “Mouse King” in E. T. A. Hoffmann’s novella The Nutcracker and the Mouse King. However, there’s still no proof that the Rat Kings actually exist and are not just cryptozoological hoaxes. But what is more unsettling, a conjoined mess of rats scratching through the dark, or a person gathering up to 32 dead rats and knitting all their tails together with their hands just to freak people out?