These Maps Reveal the Hidden Structures of 'Choose Your Own Adventure' Books - Atlas Obscura
Want to see fewer ads? Become a Member. 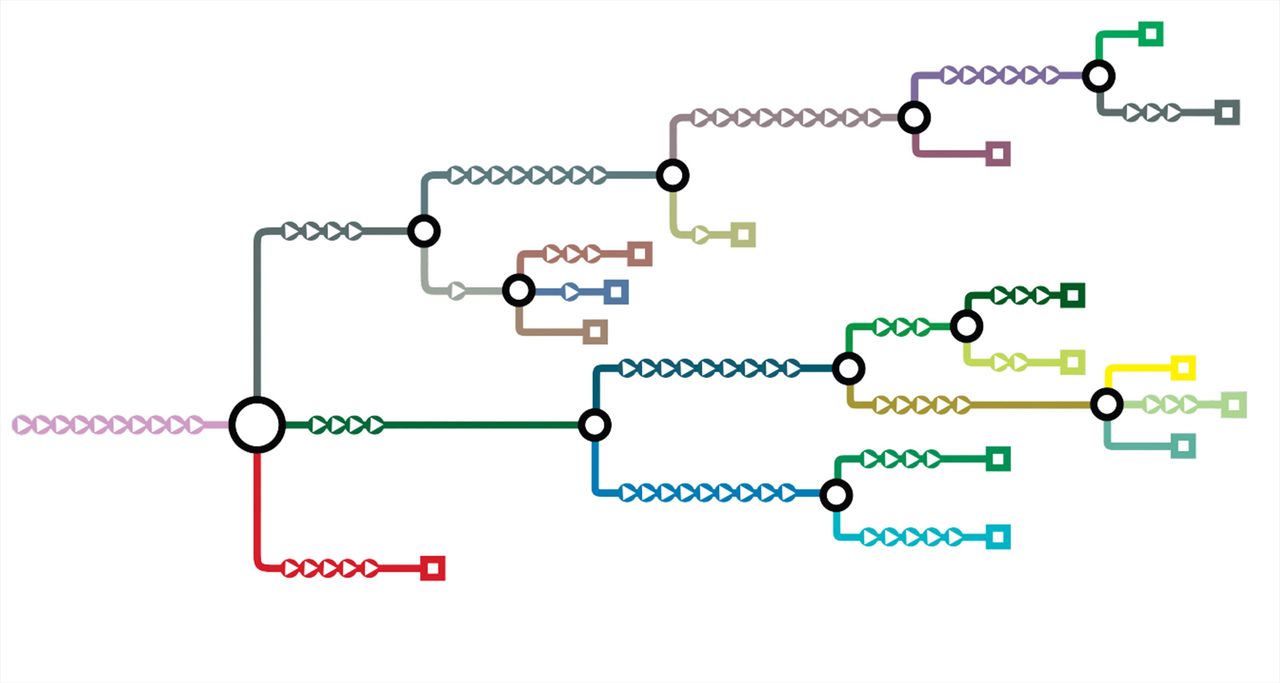 Tattoo of Death, Choose Your Own Adventure #22 All maps courtesy of ChooseCo

Reading a “Choose Your Own Adventure” book can feel like being lost in a maze and running through twists and turns only to find dead ends, switchbacks, and disappointment. In the books—for those not familiar with them—you read until you come to a decision point, which prompts you to flip to another page, backward or forward. The early books in the series, which began in 1979, have dozens of endings, reached through branching storylines so complex that that trying to keep track of your path can seem hopeless—no matter how many fingers you stick into the book in order to find your way back to the key, fateful choice. You might end up back at an early fork again, surprised at how far you traveled only to reemerge at a simple decision, weighted with consequences that you couldn’t have imagined at the beginning.

The last installment of the original “Choose Your Own Adventure” series came out in 1998, but since 2004, Chooseco, founded by one of the series’ original authors, R.A. Montgomery, has been republishing classic volumes, as well as new riffs on the form of interactive fiction that seemed ubiquitous in the 1980s and ’90s. The new editions also carry an additional feature—maps of the hidden structure of each book.

For years, fans have been creating visualizations of the forking structures of “Choose Your Own Adventure” books. Often, they’re interested in the types of outcomes at the end of each path. One map labels each ending as “new life, return home, or death,” and another separates them into “cliffhanger, solution, or death.” Christian Swinehart’s extensive graphical analysis of the books labels the endings as “great, favorable, mediocre, disappointing, or catastrophic.”

On the official maps, however, the endings aren’t coded in any way that reveals their nature. Instead, they operate according to a simple key: each arrow represents a page, each circle a choice, and each square an ending. Dotted lines show where branches link to one another.

Mapping the bones of the books can have other purposes, too. Nick Montfort, a poet and professor at the Massachusetts Institute of Technology who studies interactive fiction, has a habit of asking people what they know about “Choose Your Own Adventure” books. “They often say, ‘You have two choices after every page,’” he says. “That’s not true. Sometimes you have one choice. Sometimes you have more than two. When you show the maps, you can see that these books don’t look exactly the same.”

The older volumes, for instance, tend to have more endings than the later ones, and three of the oldest—Journey Under the Sea, Space and Beyond, and By Balloon to the Sahara—have 42 endings each, more than any other books in the series.

And here’s Journey Under the Sea:

In this book, you’re trying to locate Atlantis, and while each of the 42 endings is distinct, they can be grouped into categories.

There’s disappointment: You give up the search and someone else finds Atlantis, you don’t quite get there, your ship is destroyed, your eyesight is damaged. There’s hope: A mysterious submarine saves you, you give up the search but get a second chance, you glimpse Atlantis in the sky. There are sea dangers: You might ride a whale, get eaten by a fish, escape a shark, get eaten by shark, die by poisonous snake bite, escape a whirlpool and find your ship, escape a whirlpool but die in the ocean, get spit out of a whirlpool and find your ship, or explore a deep hole that you can’t escape from. There’s Atlantis itself, but you might destroy it before you get in. You might meet Atlanteans and, in a rare case, end up back on the surface. More often, you stay with Atlanteans, who appear in different guises in different endings. You might travel through space-time with them, be an advisor to their king, lead a revolution, end up in a dungeon, get gills implanted, live out your life in a Atlantean zoo, or become a blob of light, an Atlantean farmer, Atlantean musician, or Atlantean historian. Oh, and there’s also a secret deepwater laboratory.

This book is particularly tough on readers. One analysis found that more than 75 percent of the endings are unfavorable or deadly. One of the most poignant endings is the one where you choose to pull back from your search and someone else finds Atlantis. You regret giving up your search, but, the book says, “You didn’t really have a choice. Did you?” (Of course you did.)

By contrast, Surf Monkeys has the fewest endings of any book in the original series, with long stretches without decision-making. You’ve been spending the summer learning to surf, but now your friend Jorge is missing. Before you even have a choice to make (see that long string of arrows on the left), you’ve started your investigation, met a gang of surfers, and encountered a shark.

This book also has the longest path to an ending of any of the classics. By the end of a 61-page storyline, you’ve finally found Jorge, and though it’s not the only ending where you rescue your friend, it’s the only one where you also get to surf a killer wave.

Sometimes, your journey ends quickly, though. Island of Time has the shortest path from beginning to an end, at just six pages. Your parents leave you home alone for the first time with instructions to answer the phone if it rings and take a message. When the phone does ring, you’re presented with your first choice—be obedient and answer it, or rebel and ignore it. If you pick up, you have a quiet weekend at home. If you ignore it, you might travel back in time, meet a lake monster, get recruited to work on a ship, or end up trussed on a dock.

In just about every case, it can be surprising how a simple choice leads you down a complex path. In By Balloon to the Sahara, you’re in a balloon and are presented with a choice on the very first page. Storm clouds are on the horizon. Choice 1: “If you act now, you can release gas from the balloon and land before the storm overtakes you.” Choice 2: “Perhaps the storm will pass quickly. Maybe you can ride it out.” That’s just the beginning, since this book has the most decision points—48—of the series.

Other installments, including Eighth Grade Witch, The Case of the Silk King, Zombie Penpal, Search for the Mountain Gorillas, and Tattoo of Death have decision points that are not simply binary. One page in Mountain Gorillas, for instance, has three different choices, each leading to a different ending:

Cup of Death goes one step further. You are an amateur detective and are offered a four-pronged choice early in the investigation. As the map shows, though, one of those is a false lead, which takes you to a three-pronged fork. There, each of three options loops directly back to one of the paths you avoided at the previous decision point.

There is yet another possibility in these nonlinear books: hidden endings. Inside UFO 54-40 has a hidden ending that’s only available to a reader who ignores the decisions and flips to it without prompting. But it’s there. “It’s a two-page, big illustration of this city,” says Montfort, the MIT professor. “The land of Ultima. As you flip through the book, even if you’re being very obedient, you can’t help but wonder what this text is.”

In Escape from the Haunted Warehouse, there’s a clearer path to the hidden ending—a page that hints “The End … or is it?” Solving a simple puzzle in the text prompts the reader to turn to one more page—to a much happier outcome.

There are also structures that loop readers through the story in unique ways. Mystery of the Maya, for example, has time travel, and keeps sending the reader back to the same page and place in time. (“Almost as if it were the temporal junction point for the entire space-time continuum,” as Doc Brown would say. If you think that’s what it is, click here. If you decide it’s just an “amazing coincidence,” click here.)

These are just some of the possibilities for what is today the wide-open field of interactive fiction. When Montfort teaches “multisequential stories” he includes David Foster Wallace’s Infinite Jest, because, with all its long footnotes, it asks the reader to make choices about how it’s read. The simplest form of a story that asks a reader to make choices might be a book such as Composition Number 1 by Marc Saporta, which has the reader shuffle all the pages before reading. (The book has many possible configurations, but only one action required of the reader.)

In the “Choose Your Own Adventure” series, Montfort points out, “The choices are normally about the action of a character. What action transpires at the story level?” By contrast, in Raymond Queneau’s Yours for the Telling, the choices presented to the reader are about how the story is told. The reader might choose to hear more about a particular details, or decide what color a character’s mittens are. “It’s like the story is being told to a child,” says Montfort. “Do you want to want to hear more or less?”

Maps like the ones Chooseco created can reveal the structure of a book that gives readers choices, but though the multiple story lines are part of what makes the series so fun, they’re not the only thing that defines it. The meat of “Choose Your Own Adventure” stories are gender-neutral romps in worlds where there are no obviously right or wrong moral choices. There’s danger around bend, usually in the form of something like space monkeys, malicious ghosts, or conniving grown-ups. Even with a map, there’s no way to find out what really comes next without making a choice and flipping to another page.