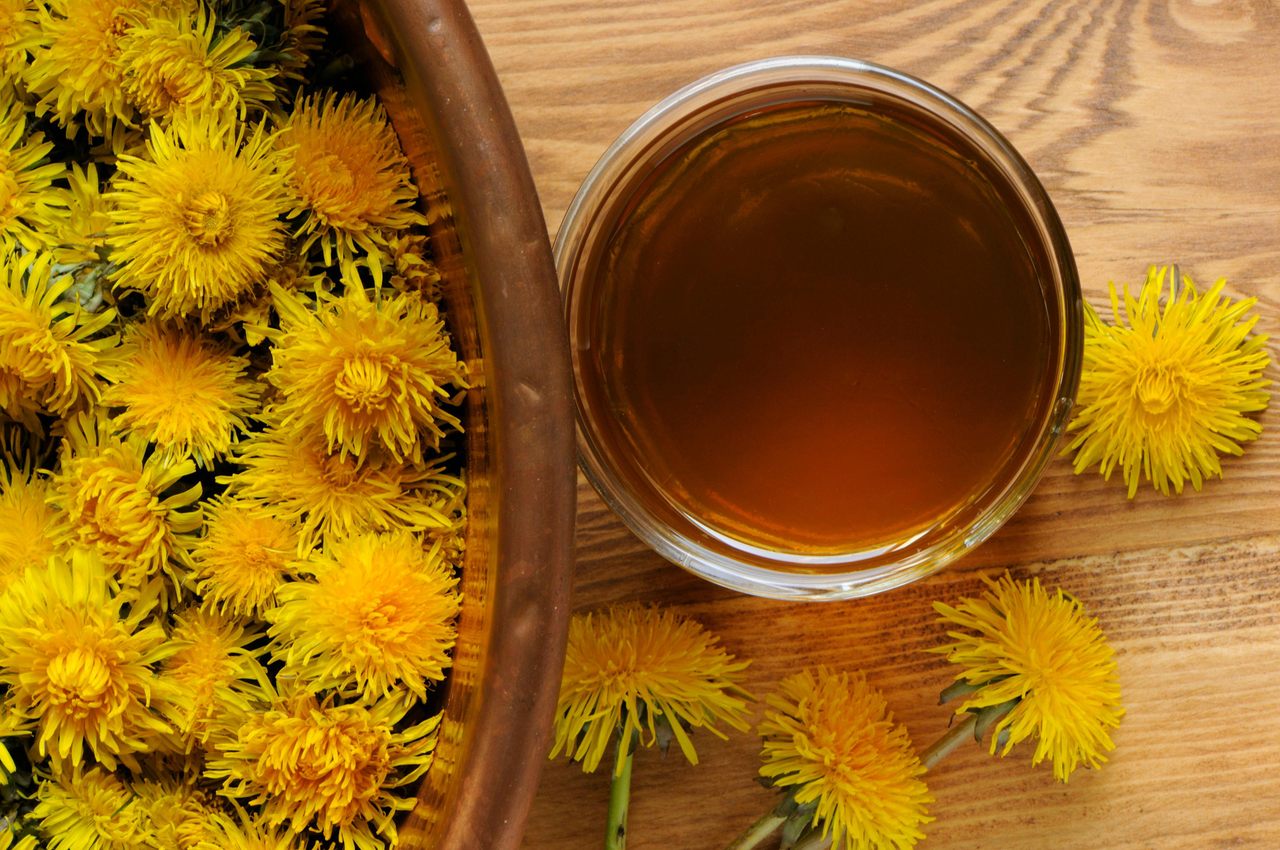 Citrus-scented dandelion jelly is a regional specialty. Denis Bringard/Alamy
In This Story
Food

This jelly is made with dandelions and tastes like honey.
Destination Guide

On a stroll yesterday, I passed by the neglected front lawn of a church. Tiny tufts of grass struggled to establish a foothold in cracks of the dry soil. Instead, dandelions practically carpeted the lot, so densely packed that it was hard to see the dirt under their bright, sunny faces.

On any other day, I might not have noticed. But I already had dandelions on the mind. In fact, I had two large bags of dried dandelions waiting for me at home, ready to be turned into jelly. And not just any jelly, but cramaillotte.

Cramaillotte goes by many names. Some know it as dandelion jelly, or as miel de pissenlit (dandelion honey) for its floral scent and honey-like color. Others call it vegan honey, since no bees are involved in making the sweet, floral treat.

The history of this preserve, like many other products made with foraged ingredients, is regional and murky. Tracing culinary origins is especially hard when it comes to dandelions, which are unfairly maligned as weeds considering that every part of the plant is useful or edible. The name cramaillotte can be traced back to eastern France, specifically the region of Franche-Comté, where the jelly is considered a specialty. Cramaillot means dandelion in the regional dialect, from a family of words that refer to anything saw-toothed or ridged.

At the end of winter, green fields across Franche-Comté become carpeted with sunny yellow dots. Locals do the utmost to consume this bounty, with bitter dandelion-leaf salads, sweet, honeyed dandelion wine, and, of course, dandelion jelly.

“There’s no stigma about eating things found in the wild,” explains France-based food writer and enthusiastic forager Emily Dilling. Foraging, she says, is “a national pastime in most non-urban places.”

This open-mindedness toward wild foods, she speculates, is rooted in the mindset of the generation that survived the lean years during and after the Second World War. The ubiquity of dandelions made them even more valuable, since they bloom all year round. But the sunny yellow flowers flourish in the springtime, making dandelion jelly “one of the rare preserves made in the spring,” writes Paul Delsalle in Drinking and Eating in Franche-Comté: A Food History.

But France isn’t the only place where people try to use every part of the dandelion. The common dandelion, or taraxacum officinale, is ubiquitous due to its hardiness and usefulness. Originating in Europe and Asia, the dandelion got its big break right after the Ice Age, since the plant thrives in disturbed ecosystems. As the glaciers retreated, dandelions followed in their wake. Both the Western and Eastern medical traditions used it for everything from soothing an upset stomach to strengthening the liver. The French word for dandelion gives a clue to one other use. Pissenlit literally means “piss the bed,” since the roots were often used as a diuretic.

The only reason I was able to see so many dandelions in California yesterday was because settlers brought the plants to North America to eat their tender green leaves, and, more importantly, to use their roots as medicine.

It’s not known who first saw spiky-but-soft dandelions and thought to cook them up into a jelly. “To judge by early references to the medical properties of dandelion flowers,” notes The Oxford Companion to Food, “this jelly may have initially been appreciated for this reason, but it is nowadays appreciated for its fine taste.” Medicinal jelly might sound ridiculous, but preserves and jellies in Medieval Europe were whipped up by apothecaries and prescribed for all kinds of ailments, especially since sugar itself was considered healthful.

Certainly, the practice of making dandelion jelly has spread far beyond France, into any region where dandelions grow in proliferation and where people have a yen for foraging, such as Alaska and the Appalachian region in the United States. While French recipes typically boil dandelions together with sliced citrus to create the jelly, their American counterparts usually call for cooks to steep dandelions in water to create a “tea” before adding citrus juice and pectin.

I would have loved to stop and pick the dandelions I saw the other day, but I wouldn’t dare. Those streetside flowers I saw were likely toxic from their proximity to traffic, pesticides, and dog pee.

“The threat of pesticides is unfortunately very universal,” says Dilling, who notes that foraging is much more prevalent in the French countryside than in urban areas. But I don’t live in the countryside, and I’ve always wanted to make dandelion jelly, so what to do?

My answer came after a search on Etsy, where I found someone selling dried dandelion heads from their land in rural Pennsylvania. Even after I unwrapped them, I still fretted as I snipped away at hundreds of dandelions, separating the yellow blooms from fluff and green stem, that the dried flowers would be less potent than the freshly foraged kind. I shouldn’t have worried. Boiling the florets together with citrus on the stove released an overwhelmingly powerful scent, like a grassland at the end of summer or a barn filled with hay.

The final jelly needed no pectin or gelatin to solidify. Just boiling flowers, sugar, and sliced citrus together was enough to create a preserve thick enough to stand tall on toast. The process seemed nigh-magical to me, after years of carefully measuring out Sure-Jell to ensure that my jams and jellies ended up as solids rather than liquids.

Cooled and set, my cramaillotte tasted like a rich marmalade with an undertone of floral bitterness. It was definitely worth the effort of snipping away at all those dandelions, and I felt a sense of discovery, knowing that common dandelions and citrus could produce jelly. I also discovered, sadly, that I’m allergic to dandelion fluff, sneezing over every stray bit that I plucked away from a flower. But the result—golden springtime on a spoon—was worth it.

Recipes proliferate online for making this jelly with fresh dandelions. For both fresh and dried dandelion jelly, though, you'll need several hundred flowers (about 200 to 300 should work) without the bitter green stem.

From boozy fruit preserves to tomato soup cake, we're looking back at a year of culinary curiosity.
food