Get Up to Speed With Daytona Beach’s Hidden Wonders - Atlas Obscura
Want to see fewer ads? Become a Member. 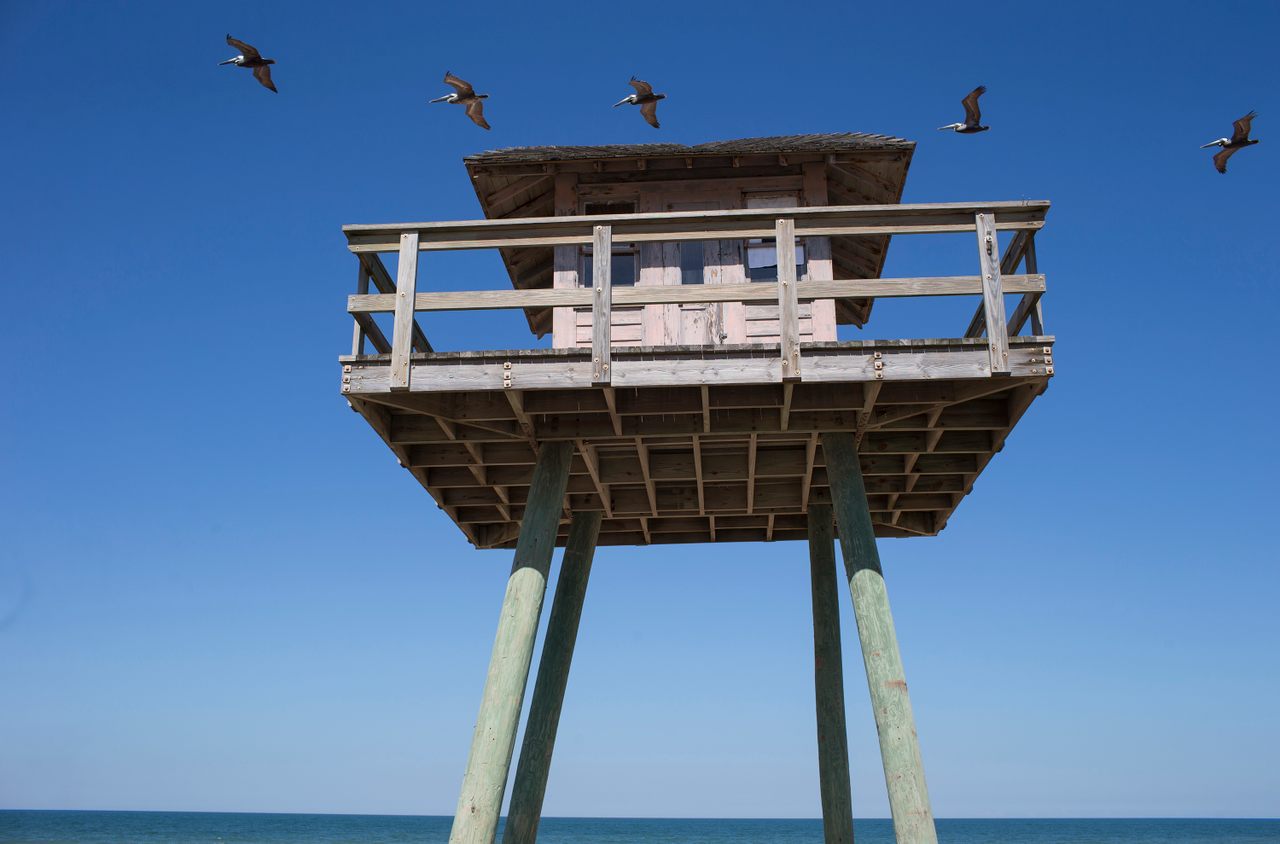 It’s impossible to deny the need for speed in Daytona Beach, a longtime mecca for motorsports on Florida’s Atlantic coast. Leather, rubber, and sand mix freely here along the the neon-lit boardwalk and main pedestrian drags. Cars cruise these sprawling white-sand beaches, and for many visitors, a trip to Daytona involves a tour of the legendary Speedway racetrack, which includes the opportunity to climb atop the winner’s podium, visit the Motorsports Hall of Fame and, for the adrenaline-seeking, drive an actual race car at top speed around the track.

Ease off the gas to appreciate the surrounding area, which is an all-terrain course for adventure seekers. Volusia County is home to beautiful beaches dotted with secret WWII-era submarine watchtowers; coastal hikes that pass through the remains of ancient Native American civilizations; and winding roads that lead to abandoned sugar mills or failed dinosaur-themed amusement parks. There’s a lot of ground to cover, and while some of it is motor-centric, there are plenty of other ways to hit the open road in Daytona. Here’s where to start.

The 34-mile Ormond Scenic Loop & Trail is in Ormond Beach, just north of Daytona Beach. You can drive, or better yet, motorcycle or cycle the loop, which winds through some of the most spectacular scenery in the area, alternating between oceanfront views and live oak tree canopies. Head north and admire the beachfront and barrier island dunes, keeping an eye out near Spanish Waters Drive for the Ormond Beach WWII Submarine Watchtower. Erected in 1942, this wooden watchtower is one of the last left of its kind. In the aftermath of the Pearl Harbor attacks, thousands like it were built in the name of national security. Floridians had extra reason to be vigilant: German U-boats had already sunk British merchant ships off the coast.

After the Watchtower, keep heading north and turn left on High Bridge Road to peel away from the beach and head down a tree-canopied road toward Old Dixie Highway, crossing over the Highbridge Drawbridge and passing vistas of rivers, creeks, and marshes.

On Old Dixie, slow down about two miles north of the Tomoka State Park entrance to catch the turnout for the Dummett Sugar Mill ruins. Built in 1825, this once-prosperous sugar mill and rum distillery was the site of the first steam-powered cane-crushing mill, helping bring the Industrial Revolution to the growing United States. Today the ruins themselves are behind a fence, but Spanish moss-draped oaks and spiky palms make this an ideal spot for a secluded mid-loop picnic.

Afterward, detour to Tomoka, a 2,000-acre state park with primordial environs that have looked the same for thousands of years. Today, the park is home to West Indian manatees, alligators, and 160 types of birds.

Once you’ve covered the official scenic route, detour to one of dozens of access points to engage in a time-honored Daytona tradition: driving on the beach. For a fee of $20, you can take your vehicle onto the same packed white sand that played host to the first automobile and motorcycle races here in 1902. This ritual is a big part of how Daytona quickly became the U.S.’s premier location for hot rodders to chase down land speed records (once speeds regularly clocked in above 200 m.p.h, Daytona’s beach was deemed too narrow and record-setting races moved to the Bonneville Salt Flats in Utah). Just be sure to follow the traffic rules and avoid slow-moving sunbathers.

The Dunlawton Sugar Mill Gardens, tucked away down a residential street three miles south of Daytona Beach, pack a lot of obscure history into their 10 lush acres. Near the entrance lies the well-preserved ruins of a 19th-century sugar mill, which was burned down (twice) during a succession of Seminole Indian wars, and later served as camp headquarters for Confederate soldiers during the Civil War. Wander farther into the gardens and you’ll come across life-sized chicken wire-and-concrete sculptures of a giant ground sloth, T-Rex, brontosaurus, and other prehistoric creatures scattered among the ferns.

These jungle-dwellers are the leftovers of the short-lived Bongoland theme park, the brainchild of local dermatologist and dinosaur enthusiast Dr. Jerry Sperber (author of the book Sex and the Dinosaur). In its brief heyday in the early 1950s, Bongoland was billed as “the world’s first monkey village” and featured a captive baboon named Bongo, a recreation of a Seminole village, and a tram disguised as a train to ferry visitors through the grounds. The local artist Manny Lawrence was responsible for the dinosaur sculptures, which look almost natural in the overgrown garden surroundings. Today, Bongoland is a delightfully odd time warp of an adventure, and the volunteers who tend to the plants on weekend mornings are fonts of information and ephemera. Ask nicely and they likely will grant access to the small library, which has meticulously maintained vintage photo albums, newspaper clippings, and Bongoland brochures.

After the gardens, take a break in air conditioning while continuing to brush up on your historical bona fides at the Halifax Historical Museum, housed in the Beaux Arts-style Merchants Bank Building, built in 1910. The small but densely packed museum traces Daytona’s history from pre-Columbian history to the city’s earliest beach races, featuring artifacts from Timucua tribe rattlesnake tooth-holding cups to a ballgown worn at Abraham Lincoln’s inauguration.

Wash down that history with a cold beverage at Froggy’s Saloon, a biker-themed dive bar with all the trimmings (think jukebox, pool table, and giant motorcycle made out of animal bones) on Daytona Beach’s Main Street nightlife strip.

Day 3: Hike Back in Time at Ponce Preserve

At 41 acres, stretching from the Atlantic Ocean to the Halifax River, Ponce Preserve is the largest park in the charming beach town of Ponce Inlet. Several interlocking hiking trails cross over sand dunes, wetlands and lush palmetto patches. Head east toward the ocean from the main parking lot, clambering uphill beneath a dense oak canopy that gives way to sprawling dunes, which lead to a lovely and uncrowded part of the beach.

Back in the forest, scramble over the remains of the Green Mound, an ancient Native American midden that once stood close to 50 feet high. Middens are shell mounds composed entirely of discarded organic material—essentially a giant dumping ground for oyster and clam shells and other debris. Although this midden has shrunk today to about 30 feet, excavations here have uncovered evidence of a thriving village dating to 500 BC. Digging into the mound unveils a sort of vertical chronology of the Native Americans who lived there for centuries. In fact, the formation of the midden itself is significant for marking the shift from a nomadic to a sedentary lifestyle, fueled by tons of local shellfish.

You’ll know you’re there when you see the enormous live oak tree with a sign noting its advanced age (supposedly 350 years). Afterward, double back toward the parking lot, crossing Peninsula Drive on foot, to hit the boardwalk that stretches out across the salt prairies and tidal inlets into the Halifax River, where you can launch your own kayak, cast nets with the local fishermen, or relax on the shaded deck at the end of the trail.

After the hike, you’re a short hop from the circa-1887 red-brick Ponce de Leon Inlet Lighthouse (Florida’s tallest), which is still an active navigational aid today. Hustle up the 213 steps to the lantern room, and your reward is panoramic views of the ocean, the Halifax and Indian rivers, and Mosquito Inlet, which was visited regularly by shipwrecked sailors, pirates, and privateers in the 18th century.

On your way back into Daytona Beach, check out the Daytona Arcade Museum, which encourages visitors to get hands-on with dozens of playable vintage games. Ending your Daytona adventure at a museum may seem counterintuitive, but it’s the perfect way to close a trip that departs from the racetrack. Armed with the knowledge that there’s more to Daytona Beach than fast cars and fast times, take a turn at one of the museum’s classic pinball machines. Gripping both sides, eyes locked on the prize, you may even catch a whiff of the thrill of a race car driver barreling around the bend.

How to spend three obscure days exploring Pensacola.
Sponsored by Visit Florida
Want to see fewer ads? Become a Member.
From Around the Web
Related

How to spend three obscure days exploring Pensacola.
Sponsored by Visit Florida
Thanks for sharing!