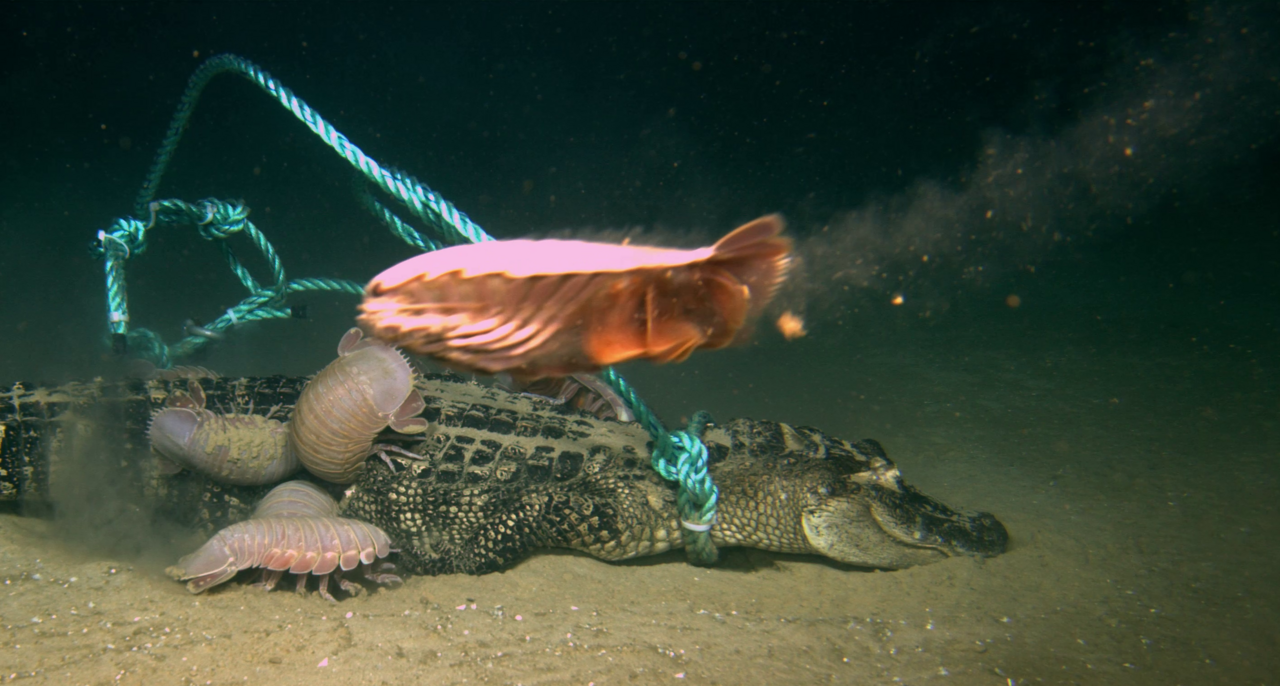 Craig McClain knows all about falls. He’s seen whale falls, shark falls, manta ray falls, even, on one occasion, a sea lion fall. In the nutritional wasteland of the deep sea, a fall—any big hunk of organic material that manages to sink—creates a temporary feast for nearby scavengers. In his work as executive director of the Louisiana Universities Marine Consortium, McClain regularly creates wood falls, by deliberately dropping deciduous chunks to the bottom of the seafloor, just to see what bites and learn more about deep sea ecosystems. So it was almost surprising that it took McClain years of working in a Louisiana lab to consider one, rather obvious, question: What about a gator fall?

The state reptile of Louisiana, Florida, and Mississippi, alligators are perhaps the most charismatic animal of the deep South: the toothy maw, the tail swish, the rows of prehistoric scutes. So when Chase Landry, a bayou-born undergraduate at Nicholls State University, floated the idea of gator falls to McClain’s lab, the team erupted in curiosity. They wanted to know how often alligator remains actually do wind up in the deep sea, and how organisms on the seafloor might utilize their precious carbon. They wondered if they could trace carbon from the alligator to help map the deep sea food web of the Gulf of Mexico. They even speculated that an alligator could be a modern-day stand-in for a prehistoric ichthyosaur fall. With all these burning questions, McClain’s path forward became abundantly clear. He had to sink an alligator.

But first he had to get his hands on one—preferably one that was already dead. Despite the reptile’s relative abundance in the region, it’s surprisingly difficult to acquire an alligator in Louisiana. The state instituted strict regulations after wild populations faced several extinction scares in the 1950s due to demand for their skins. Key features of the state’s conservation program include annual surveys of coastal nests, a booming industry of gator ranches, and seasonal, permit-driven gator harvesting, or culling. “I can’t just go out and capture an alligator on my own,” McClain says. So he submitted an official proposal to the Louisiana Department of Wildlife and Fisheries for three dead adult gators, each around five to six feet long. McClain figured that a bigger gator might not fit in their benthic elevator, the mechanical basket that allows researchers to drop and hoist heavy loads into and out of the deep sea.

This past November, McClain got a call. The department got his gators. The team wasn’t planning on executing the drop until February, so they had to clear out some space in the lab’s walk-in freezer. The alligators, culled just that morning, were still warm from the sun when they arrived. Clifton Nunnally, a research associate on the team, even remembers seeing the reptile’s limbs shudder, a posthumous nerve reaction common in cold-blooded creatures such as reptiles. The researchers wrapped the twitching gators in plastic and shoved them in the freezer. When asked, perhaps naively, if the freezer held any food, McClain laughs. “Oh no,” he says. “Just scientific specimens, samples, and sediment cores.”

When time came for February’s 12-day research cruise, McClain and Nunnally rewrapped the frozen alligators in plastic and moved them to the ship, where a much smaller freezer could only accommodate the gators if they were stood on their heads and leaned against the wall. (And this freezer actually held food, including salmon, ramen, and andouille sausage. But Nunnally says the alligators were so “nice and wrapped up” that the ship’s cook didn’t raise a stink.) Because the cruise lasted through Mardis Gras, they dined one night on a gator-shaped King Cake.

McClain’s team decided to sink the gators in three separate sites, each approximately 60 miles apart and more than a mile deep. The whole experiment—from sinking to the moment every inch of a gator has been consumed—needed to be completed within the lab’s three-year funding cycle. Sinking them any deeper would slow down the process, and any shallower would risk disturbance from the oil or fishing industries.

It’s easy to drop a gator to the bottom of the sea—but you do need the right equipment. Deep sea research vessels are equipped with cranes and benthic elevators, and most are armed with a remotely operated vehicle (ROV). On this cruise, the ROV had the singularly important job of opening the basket and pulling out the alligator. After unwrapping the first, still-frozen gator from its plastic cocoon, Nunnally and a few crew members tied ropes around the animal to ensure the ROV would have a secure grip. They also attached an old railroad wheel to keep it in one place. Then they lugged the reptile into the basket and launched it overboard. It was a rather clinical burial at sea.

Their original plan was to deploy the alligators and leave, but deep sea research depends on good weather. With over $3 million in robotic equipment weighing over 3,000 pounds dangling off the side of the ship, rough weather can not only jeopardize the experiment, but also the safety of the crew. Weeks of choppy weather delayed the schedule, though they did manage to sink two out of three gators. The third will go out in another research cruise in April, when McClain will return to check on the first two gator falls.

Due to a weather-related malfunction, McClain and his team had to return to the first drop site just 18 hours later. To their surprise, they found the gator already covered in at least a dozen giant isopods—football-sized crustaceans that resemble evil lilac pill bugs. “Giant isopods are like deep sea vultures,” Nunnally says. “They’re just hanging around, waiting for something big to fall down.” While there was never a question of whether isopods would be drawn to the gator, McClain’s team was surprised by their speed. Scavengers generally make their way to a food fall within a few days, so 18 hours seemed fast. The purple sea bugs were also joined by other scavengers, including amphipods, grenadiers, and a couple of unidentifiable black fish.

An alligator is definitely a weird thing for a scientist to intentionally sink into the deep sea, but the gulf’s isopods are no strangers to strange snacks. Nunnally says he’s heard reports of the creatures gnawing away at renegade bales of alfalfa or reams of printer paper, spilled from cargo ships like breadcrumbs at a duck pond.

Not only did they find the gator in what appeared to be record speed, the isopods tore into its flesh much faster than McClain expected. Alligator skin ripples in armor-like scutes that make the skin much more difficult to penetrate than the mammalian skin of a whale or dolphin. But the isopods easily broke through, particularly at its weaker armpits, underbelly, and eye sockets. By the time McClain’s team left the gator for the second time, some isopods had actually crawled inside the abdominal cavity and were eating the carcass from the inside out.

There’s more to learn from dropping an alligator into the deep sea than who shows up for dinner. Terrestrial carbon, such as alligator flesh, has a different stable isotope ratio than marine carbon, scientists should be able to track its journey through the ecosystem. When they revisit the gators, McClain’s team will use the ROV to slurp up nearby creatures to see who got a bite of them. Nunnally believes the findings will clarify the importance of large carbon inputs like whale falls, such as whether they comprise a majority of most deep sea diets, or are just occasional, lucky feasts. He also wants to know the geographical footprint of large food falls. “Will you benefit only if you live within a meter of this alligator? Or 10 meters, or even 100 meters?” he asks.

Before the sinking, Nunnally chopped off two of the gator’s toes to preserve a representative sample of its isotope. “A little bit of flesh, a little bit of skin, and a little bit of bone,” Nunnally says. “All you need.” When it comes time to test, he’ll dry the toes, grind them into a powder with a mortar and pestle (a coffee grinder works, too), and run the results through a mass spectrometer to measure the isotopic ratio of carbon, nitrogen, and sulfur.

McClain also believes gator falls may help understand a greater, more prehistoric mystery. Before the ascendancy of whales, enormous carnivorous marine reptiles such as mosasaurs and ichthyosaurs ruled the oceans, and would likely have supported a deep sea community of their own. American alligators first popped up 200 million years ago, and they’ve looked virtually the same for an impressive eight million years. In McClain’s eyes, Alligator mississippiensis is the closest thing the 21st century has to an ichthyosaur. “If we put an alligator out there, will we capture the last refuge of a species we didn’t even know existed?” McClain wonders, pointing to evidence from the fossil record indicating that ancient ichthyosaurs had some species of bone worm or mollusk that primarily lived on their carcasses.

Nunnally suspects that by the time they revisit the two original gators, the remains will have been skeletonized, and supporting a society of bone-eating worms. After that, they’re not sure when they’ll be back again—it’s no mean feat to check in on something under more than a mile of water. “The experiment will be over when everything is consumed,” McClain says. “I just don’t know if I’ll be there to see it.”

Scientists dropped three alligators to the bottom of the ocean. One of them was never seen again.
science

One in Indonesia has been carrying a rubber ring since at least 2016. Here’s how the litter might be affecting the animal’s life.
science

Studying the animal’s nerve network may help scientists understand our own.
Video • Object of Intrigue

7:22
Want to see fewer ads? Become a Member.
From Around the Web
Travel With Atlas Obscura
Are you a curious traveler?
Join local experts in 50+ destinations for a once-in-a-lifetime journey.
View Our Trips
Thanks for sharing!