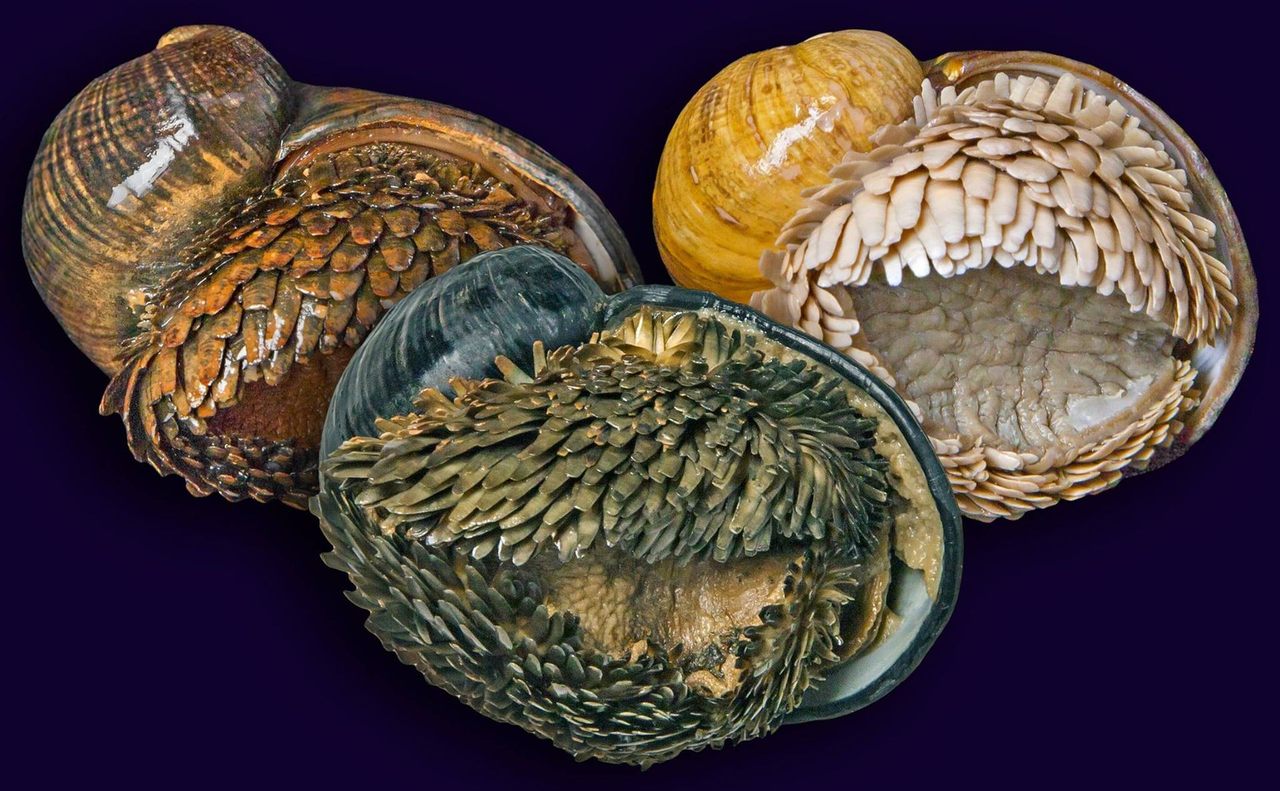 Each isolated scaly-foot population lives by a hydrothermal vent with different iron levels, which change the color of the mollusk's shells. Chong Chen

The scaly-foot snail has got a big heart.

It has to, living so close to deep-sea hydrothermal vents starved of oxygen. Only an enormous heart can circulate enough blood to oxygenate the snail and its many microbial passengers. These microbes, called chemoautotrophs, live inside the mollusk’s body, synthesize the chemicals seeping out of the vents, and turn them into food for the snail.

The scaly-foot’s heart comprises a whopping 4 percent of its body volume—proportionally larger than that of any other species in the animal kingdom. (By comparison, the heart occupies just 1.3 percent of a human body.)

But if the scaly-foot snail were to learn about its possible demise from underwater mining, that enormous heart just might break.

We kid, of course—snails don’t have brains, or at least not the kind that could understand the concept of extinction. But the scaly-foot snail recently became the first deep-sea animal to be declared endangered due to the threat of mining, according to Nature. On July 18, the International Union for Conservation of Nature (IUCN) added the scaly-foot to its global Red List, the international inventory of at-risk species.

This listing comes at a time when mining companies worldwide are scrambling to apply for exploratory deep-sea mining licenses, which would allow them to drill into the seabed in search of the valuable minerals and metals that form near hydrothermal vents. This poses an enormous threat to the scaly-foot snail, which is found in just four isolated populations near vents on the seafloor of the Indian Ocean, according to Julia Sigwart, a deep-sea ecologist at Queen’s University Belfast who submitted the snail’s case for conservation to the IUCN.

The scaly-foot gets its name from its thick fringe of dermal scales, which coat its foot-like shingles and make the snail seem ready for war. While the scales are formed from calcium carbonate—as is common among marine gastropods—they’re also coated with a layer of iron sulfides from the chemicals that erupt from the vents.

In her quest to obtain endangered status for the scaly-foot, Sigwart wanted to give it a cuter name. “We had this long discussion about whether [scaly-foot] sounded cuddly enough, so we gave it a new common name: the sea pangolin,” Sigwart says, referring to the frequently poached, scale-coated mammal that rolls up into a ball when threatened. “But then lots of people pointed out that not enough people know what a pangolin is.” So now the snail has two common names.

Each of the four snail populations occupies an area around the vent that’s smaller than a football field and three are isolated from the other populations by hundreds of miles.* Though all of these snails belong to the same species, each one takes on a different color due to the varying levels of iron at each vent site.

One of those vents lies within the territorial waters of Mauritius, which would control any deep-sea mining that could endanger the snail’s habitat. But the other three vents are found in international waters—a region that’s defined as anywhere that’s more than 12 nautical miles from any shore.

No one owns these waters, but they’re governed by the International Seabed Authority (ISA), an agency established by the United Nations to manage deep-sea benthic resources. The ISA was formed in 1994 in Kingston, Jamaica, and currently has 168 members.

The agency, which approves contracts with mining companies to extract resources from areas of the international seabed, hopes to finalize regulations on sea-bed mining by 2020. Sigwart hopes that the scaly-foot snail’s new IUCN listing will help inform those regulations, by confirming the biodiversity of the deep-sea beds in question.

Yet the ISA’s scope is somewhat unclear, as some major countries—including the United States—have not ratified the convention that established the agency.

Sigwart worries that any amount of mining could wipe out an entire population of the scaly-foot snails. Her colleague Chong Chen, a deep-sea biologist at the Japan Agency for Marine-Earth Science and Technology, told Nature that even a single mining operation could damage the hydrothermal vents, or smother the snails under clouds of sand.

According to ISA terms, exploratory mining allows companies to take “small extractions” from the seabed, and full-scale mining can’t begin until the 2020 regulations are in place. But Sigwart says she’s not sure how much mining has already taken place in the exploratory phase. “How this could be monitored I have no idea,” she says. “The middle of the ocean is a very lonely place.”

Meanwhile, Sigwart and Chen plan to add many more deep-sea species to the IUCN database. They’ve submitted 14 others so far, some of which are not endangered at all or occupy a much broader region than the scaly-foot. But Sigwart wants the ISA to be aware of all the species, endangered or not, that live around areas ripe for deep-sea mining.

As Sigwart points out, the United Nations refers to the seabeds of the world as “the common heritage of mankind.” She hopes it will be protected it as such.

* Correction: This post previously stated that Sigwart’s team discovered a fourth population of snails in 2019. Sigwart’s team was unaffiliated with that discovery, which was published in 2018.

The Centuries-Old Society Dedicated to Growing the 'Forgotten Fruit'

And that's bad news for the snails that produced them.
maps

Scientists dropped three alligators to the bottom of the ocean. One of them was never seen again.
Video • Object of Intrigue