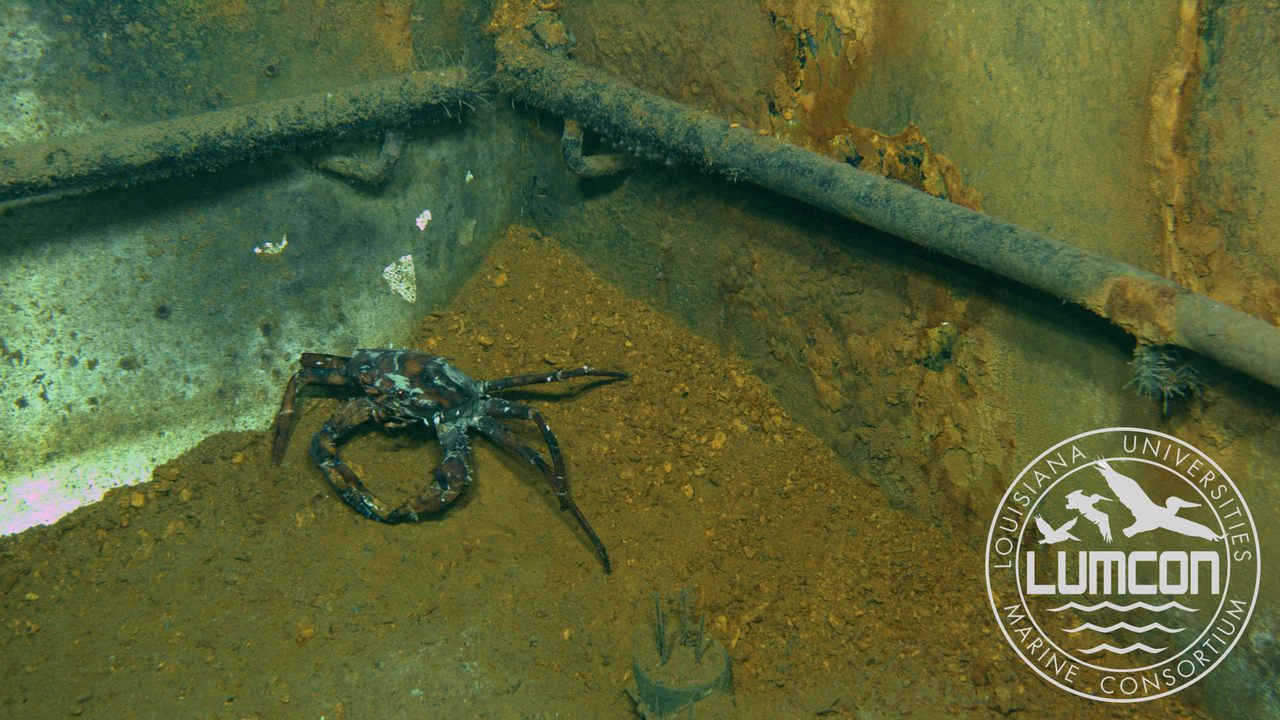 Clifton Nunnally felt sick before he even saw the seafloor. It was 2017 and he had come down with a virus on a month-long research cruise; he was recuperating in his room to avoid infecting his colleagues at the Louisiana University Marine Consortium (LUMCON). From 6,000 feet below, a remotely operated vehicle (ROV) was transmitting a live feed of the site of the Deepwater Horizon accident—the first images of it taken since 2010. Releasing some four million barrels of oil over 87 days, it was the largest accidental marine oil spill ever recorded, a seething, black apocalypse across hundreds of square miles in the Gulf of Mexico.

Nunnally shuffled down to the vessel’s control room to see what the ROV found. In his years as a deep sea biologist, he has learned that disasters like this take a long time to recover from, and that the deep site would likely still be dramatically affected by the spill. “Nothing prepared us for what we saw,” he says: a slick black wasteland, empty of all its usual denizens, such as sea cucumbers and giant isopods. Instead, the area had been taken over by strange crabs and shrimp, either tumor-ridden or eerily languid, as if sleepwalking across the seafloor. The typically white marine snow—detritus that had drifted down from organisms living above—was jet black and clumped up. It was clear that the site was toxic, and maybe irrevocably marred, according to the study the LUMCON team published recently in Royal Society Open Science.

Earlier in the week leading up to the site visit, Nunnally and Craig McClain, the study’s lead author and the executive director of LUMCON, had stopped by several spots in the Gulf of Mexico. They saw mostly what they expected: a bright, light brown, muddy seafloor—typical, healthy conditions for the bottom of this part of the ocean. At the spill site, the control room had grown somber. “One of the very first things that we saw was a solitary boot,” Nunnally says. “That made us realize what we’re looking at here.” The boot was leather and steel-toed, what a worker would have worn while operating BP’s Deepwater Horizon drill rig when it exploded in April 2010, killing 11 workers.

The subsequent cleanup and restoration had cost nearly $65 billion and spotlighted the agony of certain animals, such as pelicans stained brown from oil and turtles caked in sludge. But researchers and the public paid little attention at the time to the harder-to-reach deep dwellers such as isopods and corals, according to Nunnally. “The deep sea is always out of sight, out of mind,” he says. “You can burn off and disperse oil on the surface, but we don’t have the technology to get rid of oil on the seafloor.” So approximately 10 million gallons of it settled there.

In August 2010, four months after the accident, Mark Benfield and Marla Valentine from Louisiana State University and Old Dominion University, respectively, were the first to return to the deep-sea site. They captured video footage using an ROV and found pretty much what one might expect: a seafloor devastated, where carcasses of salps, pyrosomes, and glass sponges seemed to outnumber anything living. Benfield and Valentine documented a staggering decline across species. Mandy Joye, an oceanographer at the University of Georgia, descended to the wellhead inside the HOV Alvin submersible in 2010 and 2014. “In 2010, it was like visiting a graveyard. There were even slimey “webs” at the seabed that looked like cobwebs,” she writes in an email. “[It was the] only time I’ve been in a submarine along the seabed and found myself sad and dreading what was coming next.” When Joye returned in 2014, she saw the only life that had returned were arthropods, a population that has clearly persisted to this day.

After 2014, most studies of the deep-sea impacts of Deepwater Horizon had ceased, McClain writes in a post on Deep Sea News. In 2015, BP issued a statement claiming that the Gulf was healing itself and “returning to pre-spill conditions,” which the National Oceanic and Atmospheric Administration (NOAA) called “inappropriate as well as premature.” During Joye’s two visits in 2010 and 2014, her ROVs captured soil samples and found that BP’s oil had sprawled across more than 1,200 square miles of seafloor, according to a study published in Proceedings of the National Academy of Sciences. BP disagrees with Joye’s findings, and adds that the oil that remains is no longer harmful, according to a 2015 CNN report.

Unsurprisingly, deep-sea biologists are under no such illusions. Though the surface water above the spill site is the same vibrant blue as the rest of the Gulf of Mexico, “the deep sea works on a slower time scale,” Nunnally says. “We know that disasters like this take a long time to recover from.”

McClain and Nunnally were able to return to the spill site in 2017 because they had finished their funded research a few days earlier and had the rare windfall of free time with incredibly expensive oceanographic equipment. They’d been curious about the site for years. “We wanted to know what was going on down there,” Nunnally says. “No one had seen this, and very few images had come up from the seafloor other than the actual spill. This was something we needed to do.”

The LUMCON researchers did their best to replicate Benfield and Valentine’s study to show how the site hand changed in seven years. They surveyed the site surrounding the wreck of the rig, and another one 1,640 feet north. But the video itself seems to tell the story. There were no giant isopods, glass sponges, or whip corals that would have jumped (metaphorically) at the chance to colonize the hard substrate of the rig, such as discarded sections of pipe. The researchers also saw uncomfortably tangible evidence of the humans who lived and worked there: that boot, a door, a work fan, a railing. “There was a couch with a crab on it,” Nunnally says.

In fact, crabs were just about everywhere. The researchers were shocked by the sheer number of crustaceans and other arthropods that had colonized the spill site. According to rough estimates, Atlantic deep sea red crabs, red shrimp, and white caridean shrimp were nearly eight times more populous at the Deepwater site than at other spots in the Gulf. “Everywhere there were crabs just kicking up black plumes of mud, laden with oil,” Nunnally says. But abundance does not mean the site was recovering, or even friendly to life. Particularly eerie was the crab’s achingly slow movement. “Normally, they scatter when they see the ROV lights,” he says. But these crabs seemed unbothered, or unaware of the robot’s presence.

The researchers hypothesize that degrading hydrocarbons are what’s luring unwitting crabs from the surrounding seafloor to the deep-sea equivalent of a toxic dump. “The chemical makeup of oil is similar to the oils naturally present on crustaceans,” Nunnally says. “They’re attracted to the oil site, but everything goes downhill for them once they’re in the area.” A similar kind of chemical confusion occurred at an oil spill in Buzzards Bay in New England in 2003, which attracted hordes of American lobsters. The researchers liken the death trap to the La Brea Tar Pits: Once lured in, the crabs lose their ability to leave. With no other species able to thrive in the area, the crabs have no food source—except each other. And as one might imagine, consuming the flesh of a toxin-riddled crab or starving to death in a deep-sea tar pit is sort of a lose/lose situation.

The crabs also looked anything but normal: some claws shrunken, some swollen, shriveled legs, a dusting of parasites. “There were deformities, but mostly things were missing,” Nunnally says. “You come in with eight legs and try to get away on four or five.” The researchers have yet to ascertain what specific toxins led to these maladies. The shrimp looked just as awful as the crabs. “They didn’t look like shrimp from other sites,” Nunnally says, adding that many of the small crustaceans had humps in their backs—tumors, perhaps.

The researchers were unable to capture a specimen in this visit, but they now hope to secure funding to return, or find another free day at sea. Normally, specimen capture is conducted with a baited trap, but these sick crustaceans seem uninterested in moving toward anything, even prey, Nunnally says. The other option is to use a specialized ROV, but that’s trickier.

Nunnally hopes their study leads to more attention to the devastation on the seafloor, as well as better baseline studies of deep-sea sites before they’re opened to drilling. As a grad student in 2004, he had actually worked on the initial survey of the Deepwater Horizon site. “The time between that initial exploration to the first major oil spill was only six years,” he says, adding that he sees new rigs every time he g0es out on a research cruise. “This is something that is not going to go away soon.”

One of the last things the ROV spotted was the memorial wellhead that marks the site of the spill itself, where oil gushed out from the broken drill pipe in multiple places. On November 8, 2010, the lemon-yellow concrete cap was secured on it. Back then, it was easy to read the words emblazoned in black on either side of it: “IN MEMORY OF THE DEEP WATER HORIZON 11,” along with 11 stars. Now, splotched over in nine years of ambient floating oil, it’s harder to make out.

Scientists dropped three alligators to the bottom of the ocean. One of them was never seen again.
disasters

When a cargo ship crossing the Indian Ocean wrecked just offshore, the "people of the sea" sprang into action.
maps