It Turns Out You Can Detect an Earthquake From a Balloon - Atlas Obscura
Want to see fewer ads? Become a Member. 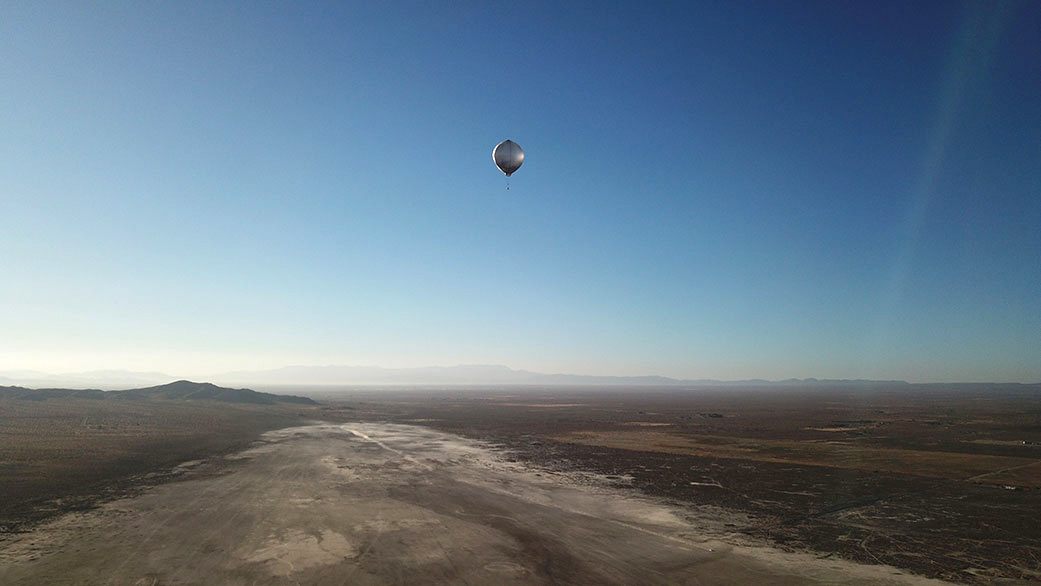 Scientists lofted balloons in summer 2019 to detect aftershocks of an earthquake in Ridgecrest, California. NASA/JPL-Caltech
In This Story
Destination Guide

On July 4, 2019, as America celebrated its independence with explosions in the sky, the ground around the California town of Ridgecrest decided to join the party: A magnitude-6.4 quake rocked the region. Two days later, a magnitude-7.1 temblor topped it, and tens of thousands of aftershocks followed in the ensuing weeks. California, no stranger to shakes, has a dense network of ground-based seismometers—and that summer they were busy.

At the same time, a small band of scientists, also in the Golden State, were trying to eavesdrop on these grumbles in a rather unorthodox, counterintuitive manner: with balloons high above their heads.

Seismometers are usually stuck on terra firma for a reason. The seismic waves they measure come from earthquakes, and travel through the ground, so it stands to reason that instruments attached to the Earth are well positioned to detect these wobbles. Why make the task harder by severing the connection with the Earth listening for seismic activity from on high?

Well, it so happens that there is a place wholly unsuited for traditional seismology. There, the ground cooks at 900 degrees Fahrenheit, and atmospheric pressure is equivalent to being a mile underwater. Any seismometer placed there would, if it survived being pancaked by pressure, would quickly overheat and melt. Welcome to Venus—a realm that, for now, is adept at quickly laying waste to any robotic envoy that we dare to place upon its volcanic wasteland. The Soviet Union’s Venera 13 lander, which paid Venus a visit in 1982, is the current record holder, persisting for a mere 127 minutes before perishing.

There are, however, parts of Venus’s turbulent, acidic skies that are not uncompromisingly pressurized while also being more forgiving. That could make these spots a relatively welcoming place to send a balloon-lofted seismic sleuth, one that might be able to detect venusquakes below. If so, scientists could document the geologic activity of our neighbor and compare it to our own world, in an attempt to better understand the behavior of both.

But to know that such a scheme would work on Venus, it needs to work on Earth first. That’s why, in the summer of 2019, scientists were peering into the clouds above California, while those plentiful quakes shifted the ground beneath their feet. They’ve now reported their results in the journal Geophysical Research Letters. Spoiler alert: Next stop, Venus.

Sending balloons to Venus isn’t a new idea. It’s been done before: The Soviet Union dropped two of them into the atmosphere in 1985, fitted with sensors to track their movements while studying the weather. They drifted through the night on 150-mile-per-hour winds before their batteries died, 46 hours after their deployment, just as the sun began to rise. They then deflated, never to be seen again.

As cool as these missions were, none of their scientific instruments were designed to detect seismic activity. Even though Venus’s thick atmosphere keeps us from seeing it, there’s a strong chance there would be plenty to detect.

Several of its volcanoes are almost certainly alive and kicking. Jennifer Jackson, a geoscientist at the California Institute of Technology and study coauthor, says that an aerial seismometer hanging about, say, 35 miles above the punishing surface, could hear all sorts of volcanic effervescence, from actively erupting magmatic mountains to the structural collapse of magma-made cauldrons. Recent work suggests country-size patches of Venus’s crust are jiggling about like slabs of pack ice, creating plenty of venusquakes. Meteors exploding in the sky, too, could also be heard.

“You could listen to a planet’s heartbeat” with balloons, says Paul Byrne, a planetary scientist at North Carolina State University who was not involved with the work. And as the differing journeys of seismic waves tell scientists about the properties of the rocks through which they traverse, an aerial seismometer could be used to construct a picture of the shimmying, secretive subsurface of Venus—a place we know almost nothing about.

But you can’t just attach a regular seismometer to a balloon to catch all these rumbles. Remember, they’re built to be in contact with the ground. Quakes, however, do produce matching acoustic waves that zip through the air. They tend to be infrasonic—that is, below the range of human hearing. But these acoustic waves change the pressure of the air they move through, so you can use barometers, or pressure sensors, to detect this infrasound from a distance.

Scientists already use infrasound on Earth to hear exploding space rocks, distant thunderstorms, the gurgling of magma inside volcanoes, and tectonic trembling. So why not do the same over at Venus? So this small but dedicated team of international researchers have been designing their very own quake-catching balloons.

The problem is that natural quakes are unpredictable, making it difficult to test how effective the plan would be. So the researchers decided to make their own. Sometimes they used a seismic hammer—a giant, piston-like device that slams into the ground. On other occasions, they buried explosives and blew them up. The infrasound detectors attached to tethered balloons detected both types of artificial quakes. But could they work for the real thing?

While pondering their options, including a trip to Oklahoma—where both natural and oil and gas industry–induced artificial quakes are commonplace—the Ridgecrest earthquake sequence began. They moved to seize the opportunity.

The balloon designs were spearheaded by study coauthor Daniel Bowman, a geophysicist at Sandia National Laboratories in Albuquerque, New Mexico. Their ingenuity lays in their striking simplicity: They are made of tape and plastic sheeting, and cost no more than $30 a piece.

Charcoal powder is used to darken the material of the balloon, so they absorb sunlight, heating the air inside and causing them to rise. When night falls, the air cools and grows denser, so the balloons fall back to Earth. All you have to do stick some instruments on them and let them go, says Quentin Brissaud, a seismologist at the Norwegian Seismic Array and the study’s lead author.

The team hustled and let two infrasound-investigating balloons loose in California on July 22, 2019, and another two on August 9, which ascended to between 11 and 15 miles above the ground. What they were hoping for was a potent aftershock. Most of these tremblors are imperceptible to people; only a strong shake would create a big enough infrasonic signal to cut through the other noise emanating from the environment around them.

On July 22, nature threw them a bone. One of the two balloons was thumped by an infrasonic outburst from below. California’s ground-based seismometers suggest that it was a magnitude-4.2 earthquake that struck 50 miles away. Careful processing of the data confirmed that the infrasound was indeed tectonic in origin. Simulations showed that the infrasound burst arrived at the balloon exactly when it should have, based on the distance to the earthquake’s source.

They had done it: the first time an earthquake had ever been detected from a high-altitude balloon. It may just be a solitary measurement, but the team found that they could use it to start piecing together an image of that quake’s subterranean abode.

This success story inadvertently mirrored an old parable. The balloons sent up on July 22 “were named Hare and Tortoise,” says Siddharth Krishnamoorthy, a research technologist at NASA’s Jet Propulsion Laboratory and study coauthor. Tortoise, which only had minor charcoal pigmentation, took its time to get up in the air. For 15 minutes, it just sat 100 feet off the ground, then slowly rose as it gradually heated up. Hare, partly because of its greater pigmentation, shot up like there was no tomorrow.

But Hare had a problem: its rapid ascent displaced plenty of air and produced a lot of noise, perhaps too much to allow it to hear any earthquakes. Tortoise, soaring far more gently, was in a perfect listening position for tell-tale acoustic yawps. Slow and steady won the race.

There is still much to sort out before trying this over Venusian vistas. This field test proved that earthquakes can be detected from on high. But using the balloons to locate the quake’s epicenter is another challenge entirely. Venus, after all, won’t have ground-based seismometers to help out.

During future experiments, including those in Oklahoma, the team will attach multiple barometers to each balloon. The acoustic waves from quakes will hit each of these barometers at slightly different times, which can be used to approximate the direction the waves came from. It’s airborne earthquake detection in stereo.

However, it’s already obvious that flying balloons above Venus “is a great idea,” says Byrne. “It’s elegant. And it’s particularly attractive to Venus.” That’s because the planet’s atmosphere is decidedly dense, which means quake-made acoustic waves will travel much more efficiently through the sky, allowing them to reach those hypothetical balloons with ease, at a detectable level.

Add a few more instruments to them, and you have got yourself a floating scientific laboratory. And, says Jackson, even using technology available today, they believe that one of these stations could survive over there for at least 60 days.

But will this ever come to pass? Until this month it wasn’t looking particularly probable. But now that we know NASA is sending two spacecraft to Venus, and the European Space Agency is sending a third, so the odds have increased somewhat. Two of these missions will orbit the planet, while another will plunge through the atmosphere, taking readings until it perishes at the surface. They will make game-changing discoveries, for sure, but not the kind of measurements a long-term, in-atmosphere balloon flight could.

“I very much hope that there are Venus balloons in the future,” says Krishnamoorthy. “But whether it will happen or not is anyone’s guess.”

Researchers braved storms and monstrous underwater mountains to learn why one region’s earth-shaking is so peculiar.
space exploration

A familiar sight, millions of miles away.
meteorites

NASA accidentally sold it, tried to take it back, lost it in a court battle—and now you can own it.
Video • AO Docs