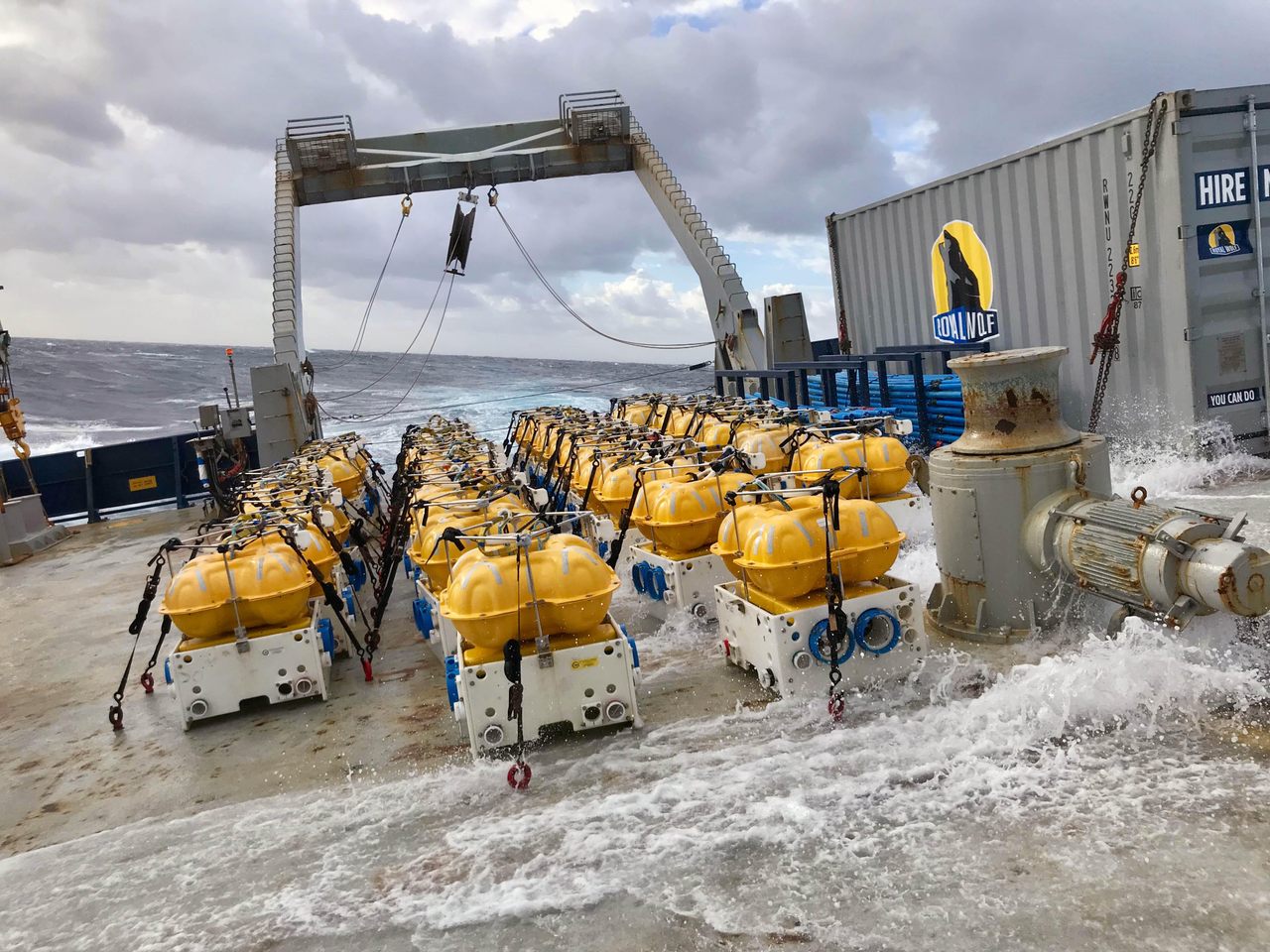 Receivers on the vessel's aft deck, shown here between deployments, survived rough seas—not one device was lost during the expedition. Kerry Key/Courtesy Samer Naif
In This Story
Destination Guide

The research vessel bobbed in the southwestern Pacific like a toy boat in a bathtub. Three scientists watched numbers scroll across a monitor as the minutes ticked by on another 12-hour shift. The instruments collecting that raw data had been deployed days earlier in a line on the ocean floor. Now, the ship was towing a fish-shaped transmitter just above the seabed to pick up the remote devices’ signals and send them back to the vessel. Things were going well. Until they weren’t.

“When you’re out at sea, you pray everything goes correctly. But going in, you know you’re probably not going to have a perfect cruise,” says Columbia University marine geophysicist Christine Chesley, part of the science team aboard for the expedition. The researchers’ mission was to collect data that might answer a key question about an unusual seismic zone called the Hikurangi Margin: In this relatively small area, why are some quakes massive, but others so sneaky that only the most sensitive instruments detect them? The answer, the scientists would discover, appears to be a surprise source of lubrication for the planet’s grinding tectonic plates.

But first, the team needed the data. The seafloor off the east coast of New Zealand’s North Island, like most of the world’s ocean floor, is poorly mapped. And it’s anything but flat. Rugged peaks and dramatic canyons hide under thousands of feet of water. The trio watching the monitor saw the numbers change, showing a sudden shift in the seabed’s contours. Their transmitter was approaching something massive. They raised the alarm: The transmitter had to be hauled up to avoid hitting something—a steep slope that suggested an undersea mountain that no one knew was there. That meant pulling in the cable that was towing the pricey piece of equipment. The cable was about three miles long.

“You can really only pull in the transmitter so quickly,” says Georgia Tech marine geophysicist Samer Naif, the expedition’s chief scientist. “When the seas get rougher, and you start getting close to the tension limit of what the cable was engineered for, it can get really scary.”

“You’re scrambling, just hoping you make it. We missed it by about 10 or 15 meters,” he adds, his voice still tense, while recalling how the team barely avoided smashing the expensive equipment into the uncharted slope.

The incident, says Naif, was one of the “hairier” moments during the 29-day expedition, though the crew also encountered some of the region’s notoriously temperamental weather. “It never got dangerous, but it certainly got exciting,” Naif says. “Over the course of a month, people learn what kind of swell is their limit for functioning.”

Marine geophysicists from all over the world brave these waters because of the Hikurangi Margin: Far below the swells and treacherous unmapped seafloor mountains, the Pacific plate is sinking beneath the Australian plate, creating New Zealand’s largest subduction zone. Hikurangi’s southern area is capable of unleashing massive earthquakes—“The ones that make the news,” says Chesley, adding, “Those are the ones that, for a long time, we geophysicists and geoscientists paid attention to.” But in the north, there’s a different kind of seismic activity, one that is still relatively unstudied.

“Within the past 20 years, there’s been this whole new class of earthquakes that’s been discovered called slow-slip events,” says Chesley, who is working toward her doctorate at Columbia’s Lamont-Doherty Earth Observatory. She’s the lead author of a paper, recently published in Nature, that investigates these “silent” quakes in Hikurangi. If the southern Hikurangi’s quakes are a pot boiling over on your stove, its northern slow-slip events are a tea kettle releasing steam so gently it doesn’t even whistle.

The slow-slip events, says Naif, a coauthor on the paper, “build up every few years and release the energy slowly. That’s actually potentially reducing hazard: Instead of that energy being released in seconds, it’s released over weeks.”

Based on imaging data from their expedition, Chesley and her colleagues found a potential explanation for the northern Hikurangi’s sneaky shakes: a seamount. These underwater, extinct volcanoes dot the seafloor around the world, but geophysicists have not figured out what happens when the plate they sit on gets pulled beneath another plate during subduction.

Some scientists believe the force of the massive conveyor belt-like subduction process just squishes or shears off the seamount. Others suspect the seamount, as it’s pulled below, is strong enough to damage the plate above it, reducing its ability to gather enough energy to power a big quake. Instead, the weakened plate releases the energy in smaller seismic events, which is what the team found. “The ideas were out there,” says Naif. “We were just able to image it for the first time and lend it some credence.”

What the team was surprised to find, however, was one of the ways the seamount appeared to be weakening the overlying plate and creating a slow-slip event: The seamount was loaded with water. The liquid, stored deep within the rock, acted like lubrication and reduced friction as the entire mass was subducted.

“It was one of the most eye-opening, jaw-dropping results,” says Chesley. The team was able to compare their data with seismic records from a 2014 slow-slip event and found that the silent quakes occurred at the same spot where their imaging suggested water-riddled rock was being subducted.

“It seems like these silent earthquakes are very much affected by the amount of water that you can add to the slip system, and it seems like these seamounts influence how much water is transported into that system,” says Chesley.

University of Southampton geophysicist Kate Rychert, who cowrote a commentary in Nature about the new paper but was not involved in the research, says the results are not definitive, and that several alternate scenarios could explain the difference between Hikurangi’s violent southern shakes and silent northern shivers. But, she adds, “It’s an important step.” She says the team’s approach, combining seismic and electromagnetic data, is particularly significant. “This type of approach, considering two independent types of observation, is a powerful way to increase our understanding,” she says.

Chesley and colleagues will continue to process the data from their expedition, which included surveys of areas along the entire length of the Hikurangi Margin. They hope to uncover additional clues to explain its unusual earthquake patterns that may, eventually, improve hazard assessments for subduction zones far beyond New Zealand. As Naif points out: “The vast majority of the human population lives along coastlines, and a lot of that is areas of subduction zones.”

A look back at the ingenious ways scientists advanced our understanding of the world in 2021.
disasters

Thousands died in 1986 when the crater lake unleashed a cloud of toxic gas. Could it happen again?
disasters

Though the damage on La Palma in the Canary Islands is extensive, no lives were lost.
science