How a Fossilized Snake With Legs Fits Into the Lineage of Lizards - Atlas Obscura
Want to see fewer ads? Become a Member. 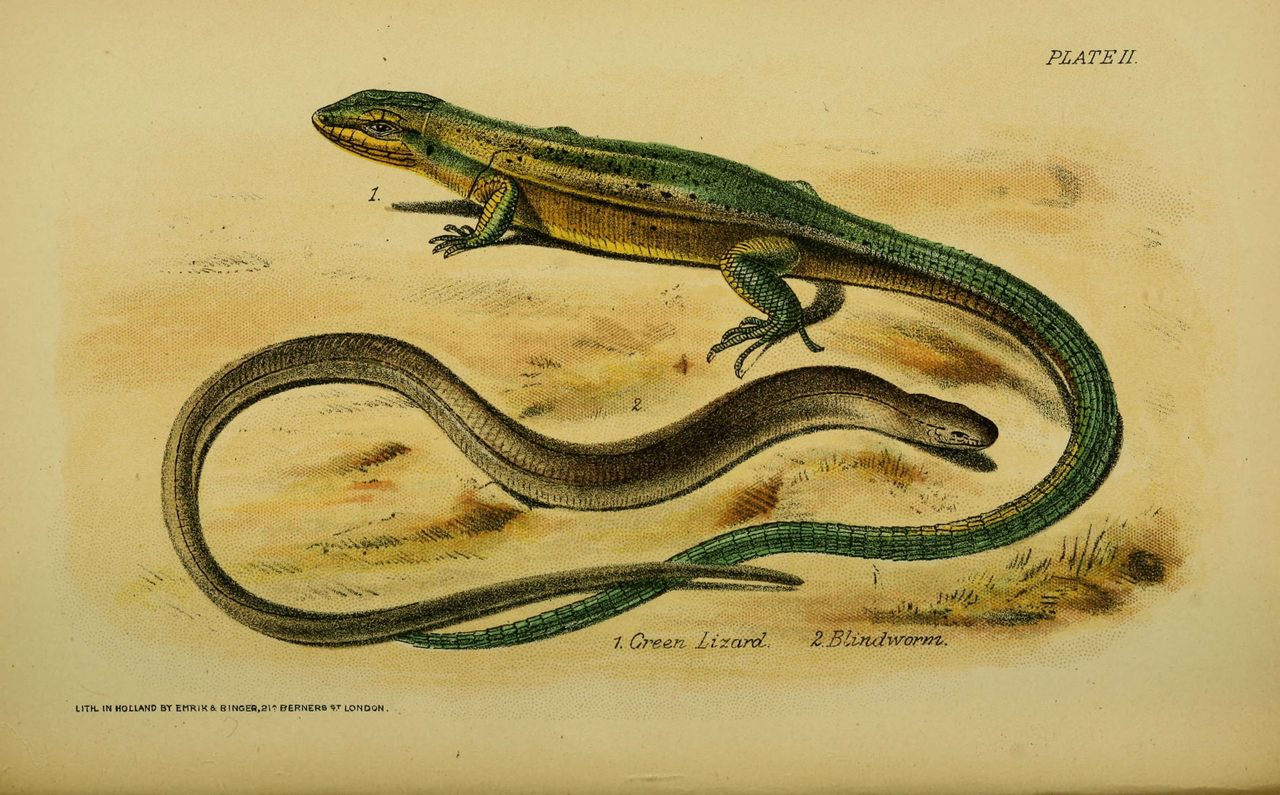 Neither of these reptiles is a snake. Biodiversity Heritage Library

Sara Ruane, a herpetologist and evolutionary biologist at Rutgers University who studies living snakes, has some answers. “Snakes are just fancy lizards,” she says. More precisely, she explains, snakes represent a distinct branch of the lizard evolutionary tree. Both types of animals are squamates, the largest order of reptiles, and snakes belong to the suborder Serpentes. In other words, all snakes are technically lizards, but not all lizards are snakes.

It’s also true, Ruane says, that early species of snake once sported gams. But all these legged snakes are extinct today, meaning that you’d be unlikely to confuse a snake for a lizard in the wild.

The taxonomical rabbit hole deepens, however, when one considers the existence of legless lizards that are not snakes. These creatures slither on the ground like snakes, but a few subtle traits differentiate them from their serpentine cousins. The most telling distinction lies under the creature’s skin, in its very bones. The skeleton of a snake consists mostly of trunk vertebrae; other legless lizards are mostly made up of tail vertebrae. “That’s one of the real biggies, snakes are a lot of body and not nearly enough tail,” Ruane says.

Without actually dissecting the creature, there are also a few visual cues that can help differentiate. Snakes, unlike other legless lizards, lack moveable eyelids. “They can’t blink,” Ruane says. “It’s like wearing a very hard protective goggle at all time, which allows their eyes to scrape the ground or a tree branch.” Snakes also lack external ears, which most lizards have—except for the earless monitor lizard, which roams the island of Borneo in blissful silence. “There are always exceptions,” she says. “Every now and then there’s a weirdo lizard.” (Lizard ears are hard to spot, as they resemble tiny holes in the head.)

Snakes are not known to chew their meals, and so they tend to have larger, wider heads that allow them to swallow their prey in one great gulp. (This rule, of course, has an exception too: The crab-eating water snake, which roams mangrove swamps in Australia and Southeast Asia, tears its prey of crabs limb from limb.) “Your average snake is going to have more of a neck, or at least a neck indentation,” Ruane says. “Most legless lizards don’t have much of a neck. It just immediately turns into body.” And if you get really close up, there’s another way to tell the difference. “Snakes almost always try to bite you,” she says, adding that she is bitten by non-venomous snakes “all the time.”

Without staring a mysteriously legless reptile in the face, distinguishing snakes from other legless lizards comes down to an overall feeling. Ruane relies on what she calls the reptile’s gestalt, the psychological term for perceiving a whole thing as the sum of its parts. “The essence of the animal has a very different look,” she says. “If you look at enough of these things, you’d be able to tell which is a lizard and which is a snake, even if none of them have legs.”

As if you weren’t already confused, there is one more distinction to make: There is such a thing as a legless lizard with legs. Legless lizards in the family Pygopodidae (technically a type of gecko) have no fore limbs but small, flat flaps where hind legs used to be. And some snakes today, such as boas and pythons, still do have the hint of a leg that now functions as a spur, used to clasp onto another snake in coitus.

All these distinctions may seem persnickety, but they actually get at the heart of one of the biggest unresolved questions in herpetology: What type of lizards did snakes evolve from? “It’s a very contentious topic,” Ruane says. “There are two leading theories.” One school believes snakes descended from a group of lizards living underground; the other argues that snakes originated from a group of lizards living in the sea. In 2015, researchers in England described what they believed to be the first four-legged snake in Science. But the paper ignited venomous controversy, as another group of herpetologists argued that the fossil was a different kind of ancient lizard. The newly discovered fossilized skull of the legged snake Najash, while beautifully complete, does not solve that mystery, Ruane says.

Ultimately, all snakes can be traced back to the same mysterious divergence from the rest of the evolutionary tree. That’s part of what makes them special. “Snakes aren’t snakes just because they don’t have legs,” Ruane says. “That’s just one part of what makes a snake a snake.”

Or at least it used to. What can these recently identified dino-birds teach us about extinction?
snakes

Join us for a daily celebration of the world’s most wondrous, unexpected, even strange places.
snakes

A research station in India is on call 24/7 to aid wayward reptiles in need.
Want to see fewer ads? Become a Member.
From Around the Web
THE GASTRO OBSCURA BOOK
Taste the World!
An eye-opening journey through the history, culture, and places of the culinary world. Order Now