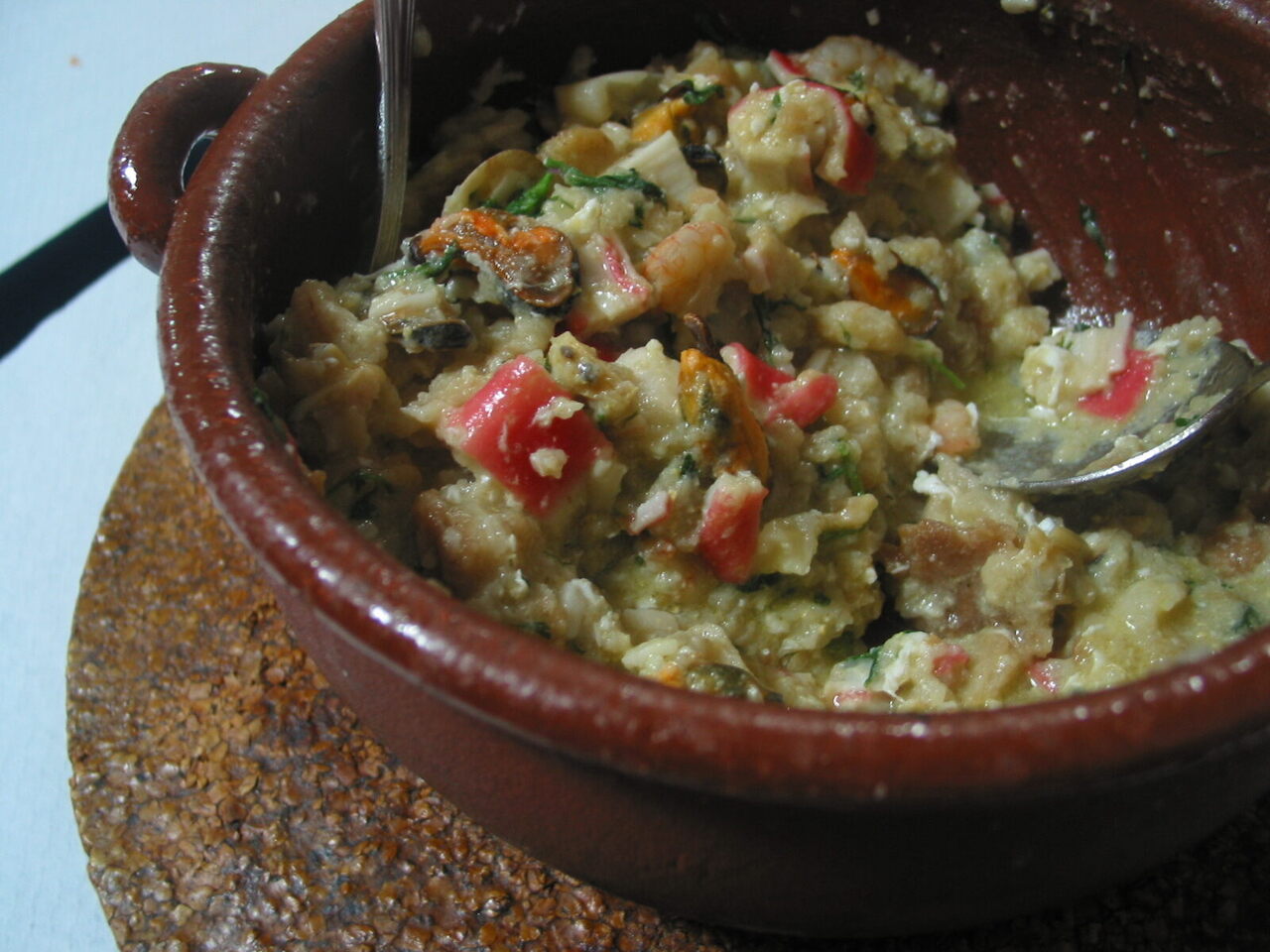 Bread can be turned into a hearty soup. ricardo/CC BY-SA 2.0

You made bread. It may have been sourdough—as dense as dark matter, and much trickier than it looked from the recipe—or oil-slick focaccia, or no-knead white, with yawning holes in the crumb. Whatever it was, you made bread, and now you have too much of it, and it feels like a waste to throw it out. (At the same time, it’s growing increasingly stale.)

Home cooks around the world have faced some version of this dilemma for pretty much as long as bread has existed. The result is a rich, global tradition of repurposing such leftovers. In some cases, they’re moistened into a thrifty mush; in others, a heel of stale bread becomes the conduit for bananas, or shrimp, or any number of more obviously delicious foodstuffs. Here are seven dishes and drinks that transform scraps into a spread. In almost every event, these recipes are far better than stale bread has any right to be—and usually incredibly filling.

Made with coriander, garlic, olive oil, and, of course, bread, the Portuguese soup açorda tells the story of centuries of Arab-Portuguese relations. While the base ingredients remain the same, açorda is often topped with seafood, sausage, or a poached egg, depending on where it’s made. More common in the south of the country, it’s believed to be a loose interpretation of tharid, a Middle Eastern bread soup often eaten in the month of Ramadan.

Though açorda is now often eaten by adults, it was for a long time “a stand-by dish for feeding infants,” writes Edite Vieira in The Taste of Portugal. It makes sense: It’s easy to assemble, hard to dislike, and doesn’t require too much chewing. More than that, she writes, this bread porridge is “surprisingly tasty,” whatever your age. Vieira’s book contains recipes for several varieties of açorda.

For “authentic” kvass, the Russian soft drink made by fermenting bread, yeast, malt, sugar, and water, you really need rye bread. That, at least, is the characterizing flavor of this tart, fizzy drink, popular in Eastern Europe since at least 989 AD. (At the baptism of one Prince Vladimir, the spread apparently featured “food, honey in barrels, and bread-kvass.”)

In the thousand or so years since, kvass has been drunk by monks, appeared in Tolstoy novels (he nicknames it “pig’s lemonade”), and enjoyed by generations of Russian school children, despite its 0.5 percent alcohol content. (Its Estonian cousin is known as kali.) From 1967, the drink was commonly found on street corners, sold out of iconic yellow barrels, labeled квас, and drunk from communal glass mugs of dubious hygiene. “Like beer, kvass is drunk chilled, so the appearance of carts with kvass barrels on the streets meant that summer was nigh,” remembers Sergey Grechishkin in his memoir Everything is Normal: The Life and Times of a Soviet Kid. “Kvass was one of the great pleasures of a Soviet kid’s life, alongside ice cream and elusive bananas.”

The modern drinker has two options. You can buy the commercial stuff—Nikola is one popular brand—or make your own. Regardless, in the interests of public hygiene, it’s probably worthwhile to make sure everyone has their own glass.

Traditionally, firfir is served warm, writes Kittee Berns in Teff Love: Adventures in Vegan Ethiopian Cooking, and eaten with a spoon or fork, or even more injera, as “primo comfort food.” (Its cold counterpoint, a kind of “injera salad,” is known as fitfit.) Cooks often fold in other ingredients, including leftover wat (stew), broth, or vegetables. Though very common in Ethiopia, writes Berns, firfir is “somewhat rare in Ethiopian restaurants in North America.” To make it at home, you really need the spice mix berbere, as well as authentic injera, made with the grain teff.

A Victorian chef seeking to repurpose a loaf of bread didn’t have to look far. Mrs. Beeton’s Book of Household Management, the domestic bible published in 1861, boasts no less than five recipes for bread pudding: “baked,” “very plain,” “boiled,” “brown,” and “miniature.” In each, stale bread is reduced to crumbs, mixed with milk, sugar, and dried fruit, then heated into one solid mass. It’s frugal, stodgy, and an exercise in Anglo-Saxon restraint.

By this point, Brits had been eating some version of bread pudding for centuries. Compared to its medieval forebear, a piece of moistened bread known as a “sop,” the addition of sugar and fruit would have made Mrs. Beeton’s dishes wildly extravagant.

Nowadays, bread-and-butter pudding is far more common. Here, custard, leftover sliced bread, and raisins come together in a combination that the British food writer Nigel Slater likens to an edible hug. (The Guardian’s Felicity Cloake has taken a stab at perfecting the recipe.) It’s a beloved school-cafeteria stalwart, and one that far exceeds the sum of its parts. (Summer pudding is yet another British bread-based dessert.)

Spanish name notwithstanding, biscocho de caña is a typically Filipino cookie that can be hard to find elsewhere in the world. It’s profoundly post-colonial: The Spanish word bizcocho typically refers to a kind of sponge cake, while wheat bread seems to have first arrived in the Philippines with Portuguese explorers and settlers in the 1500s and became much more common and accessible in the Second World War with the arrival of American troops.

The word biscocho, like biscotti, comes from the Latin for “cooked twice.” The biscuit is made with twice-baked, crusty pan Americano, and coated in butter and sugar. It can also be made with condensed milk, for added sweetness, or flavored with butterscotch.

Within the Philippines, Iloilo City, on Panay Island, is biscocho’s undisputed hometown, with outlets of the popular chain Original Biscocho Haus sprinkled liberally across the city. Though biscocho can be made at home, it’s more commonly purchased commercially, particularly by visitors to the city. Either way, this sweetened cracker is eaten at almost any time of the day or night, to stave off hunger between meals, kick off the day, or as an accompaniment to tea, coffee, or hot chocolate.

You might already be familiar with the Vietnamese word for a baked good: bánh, as in bánh mì. The dessert bánh chuối is often made by combining bread scraps with banana (chuối) to produce a sweet with the consistency of cheesecake and the general austerity of all leftover-bread-based foods, at once luxurious and economical.

Often made with stale white bread, coconut cream, and lots of sugar, this pudding is flavored with banana or coffee according to preference, baked, then chilled in the fridge. Essentially a “baked banana bread pudding,” it’s “especially easy and forgiving” to bake, writes Sue Tran in the foreword to her recipe on Vice, with plenty of flexibility according to what you have to hand: “Any bread works,” she says. “Baguette is traditional, sourdough makes it a bit tangy, but even white sliced bread works.” More than that, it’s delicious, served either warm or after a few hours of chilling in the fridge.

To the casual observer, the Balkan bread mash popara might sound a little on the bland side. That’s sort of beside the point. For centuries, this mix of torn-up stale bread and a liquid—milk, water, or tea—has been used to stave off hunger and make resources go further in times of hardship.

But that doesn’t mean you can’t gild the lily. Popara can easily become more sumptuous with the addition of fried onions, sour cream, sugar, or cheese, or by adding lard, butter, or some other fat. Beyond that, it’s down to a matter of taste—whether you’d rather start your day with smooth popara, like a kind of bread milkshake, or a chunkier texture, where pieces of chewy bread are suspended in the mush. Either way, it’s the sort of meal that sits heavily on the stomach, pushing any thoughts of lunch off into the distant future.

Make bread fit for a pharaoh and a sweet treat out of tiger nuts.
food

A factory boasts several tributes to its popular rice cracker, including an actual shrine.
London, England

It's not just bread; it's a way of life.
Read more
Thanks for sharing!