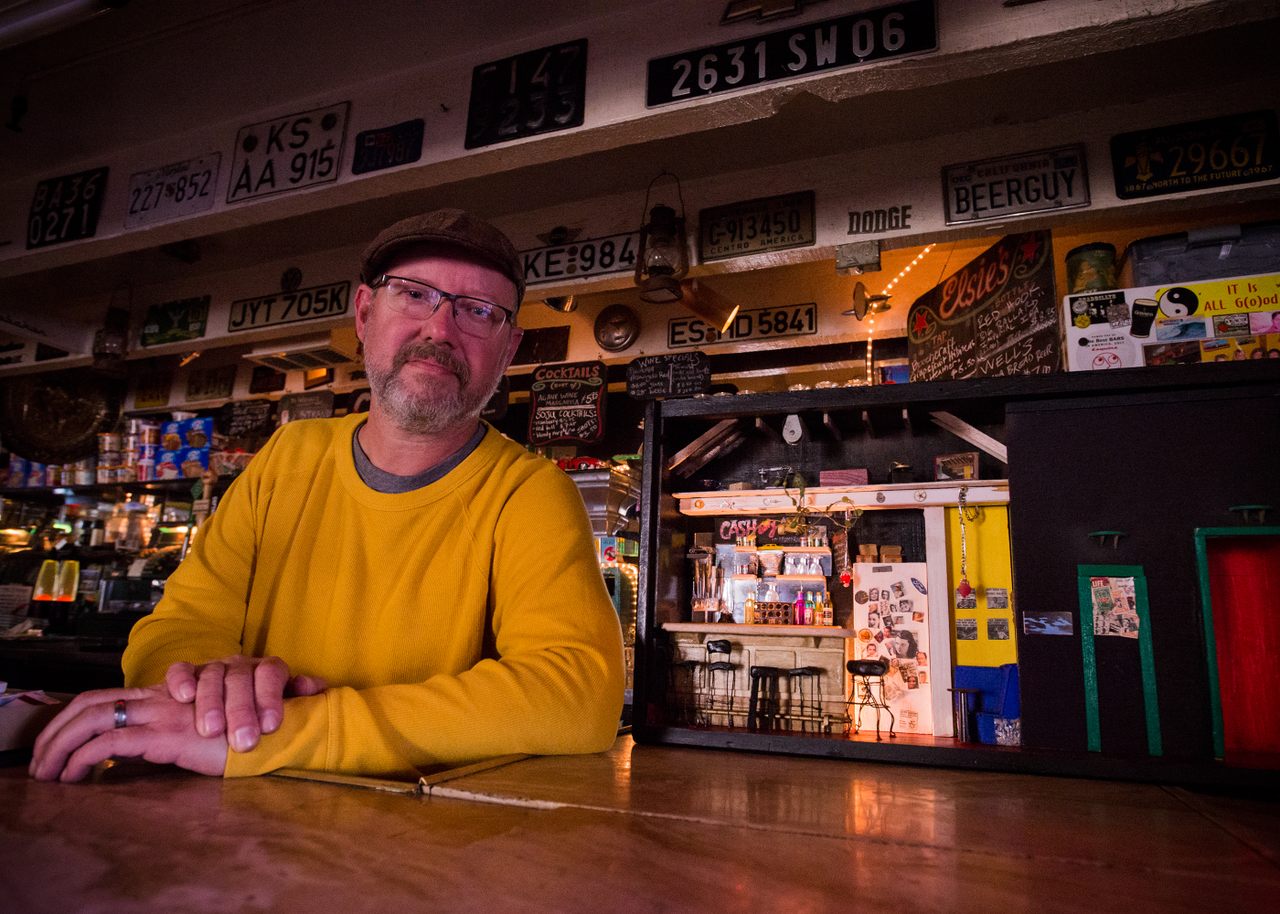 Artist Michael Long with a diorama he built of Elsie's Tavern, in Elsie's Tavern. John Paul Titlow
In This Story
Destination Guide

Santa Barbara doesn’t have many dive bars. But those that do exist in this idyllic beachside town have one thing in common: Chances are, they’ve been shrunken down into a lifelike, diorama-sized watering hole, complete with tiny features like barstools, beer taps, wine bottles, and weird art clinging to the grit of the walls.

These miniature bars are the creation of Michael Long, a local artist who turns some of the area’s most beloved haunts into handmade works of hyper-detailed assemblage art.

“The grimier the better,” Long declares between sips of an IPA at Elsie’s Tavern. Fittingly, it’s this eccentrically decorated, cash-only dive that first inspired him to recreate bars when he worked here in the late 1990s.

“I enjoy making things that are grittier and more worn,” says Long. “So trying to make something that is beautiful or ornate becomes a real challenge. I like the darker side of things.”

These replicas of bars—including local favorites like Elsie’s, The Pickle Room, and The Mercury Lounge—are part of Long’s ongoing assemblage art series depicting the interiors and exteriors of buildings. Built with a mix of raw materials and found objects, each of these structures feels like it could be a miniature movie set. Think Wes Anderson, but with fewer vibrant colors and more cigarette stains.

This unique, three-dimensional artwork has gained Long some local notoriety and Instagram praise. Long, who cofounded a small, bizarrely decorated art-studio space call The Rondo, has had his work featured in galleries and exhibitions across town. But it’s the bars that seem to generate the most enthusiasm.

“Bars attract like-minded people,” says Long. “It creates a camaraderie that you don’t get at home or at school or at the gym.”

Peering into one of these boxes, it’s hard not to get sucked in by the details: beer cans, plants, refrigerator magnets, wine glasses dangling above a worn-looking bar. Even the warm light of the mini-bulbs used to illuminate each interior helps it feel more like the real thing.

In Elsie’s Tavern, Long has his mini-Elsie’s diorama with him. Patrons stop in their tracks, do a double take, and walk up to the box to marvel at how realistically it emulates their surroundings.

“Getting started is the hardest part,” says Long. “Once I get started, I can knock it out pretty quickly.” He often begins by sketching the room. From there, each box takes about 24 hours to complete.

“It’s like a big, backwards puzzle,” he says. “I create all the pieces and lay the entire thing out. Then I take it apart, paint each piece and let it dry.” The painting stage is where much of the grit and stressed-looking texture of these miniature environments comes from.

Finally, Long glues and nails everything back together, this time with a more true-to-life feel. “Once it’s all colorized, it all of the sudden becomes like a little movie set,” he says.

About 90 percent of each box is hand-fabricated using materials such as wood, epoxy, and wire. In one case, Long used leaves to make fake trash. In another, he used part of a vintage photo slide to create backlit windows. One model even features a neon “OPEN” sign made of small-gauge luminescent wire that actually lights up. While he’s got barstools and cash registers down, it’s these unique details—plants hanging in Elsie’s, or the intricate, Chinese lantern-style lights inside the historic Pickle Room—that require more experimentation.

“I try my best not to make it look like a dollhouse,” he says. “I want it to give an emotional feel rather than be a photorealistic model.”

This feels less surprising once you learn why Long first built dioramas, long before he glued together any miniature barstools: his nightmares.

Born in Santa Barbara, Long spent much of his childhood moving from place to place. This frequent, disruptive relocation appeared to have a side effect, he says: recurring nightmares in which he never quite knew where he was. The confusion often followed him into a sudden, sweaty state of consciousness.

At five years old, Long started building paper-based “dream boxes” that emulated the rooms in his nightmares. “There were a lot of bloody basements and doors that went to nowhere.” He realized it had a cathartic effect. Once replicated in 3D, the dreams would stop.

Decades later, Long found himself back in Santa Barbara, an affluent vacation town better known for its postcard-worthy beaches and pricey restaurants than hole-in-the-wall drinking spots or weird art. Still, it’s here that Long has set up shop as the self-appointed, epoxy-armed documentarian of the town’s unpolished, weird underbelly.

“There are all of these cool little bars off to the sidelines that are really for the locals,” he says. It’s these hidden gems that seem to resonate the most with people—even if you have you squint to see the details.

How to Name a Mountain Gorilla in Rwanda

Once places of refuge, these Anglo-Indian bars are now institutions.
bars

It's now a monument to a forgotten campaign against alcohol.
maps

Hidden in the Santa Ynez Mountains off Highway 154, this tiny restaurant once served as a stagecoach stop.
Condom, France