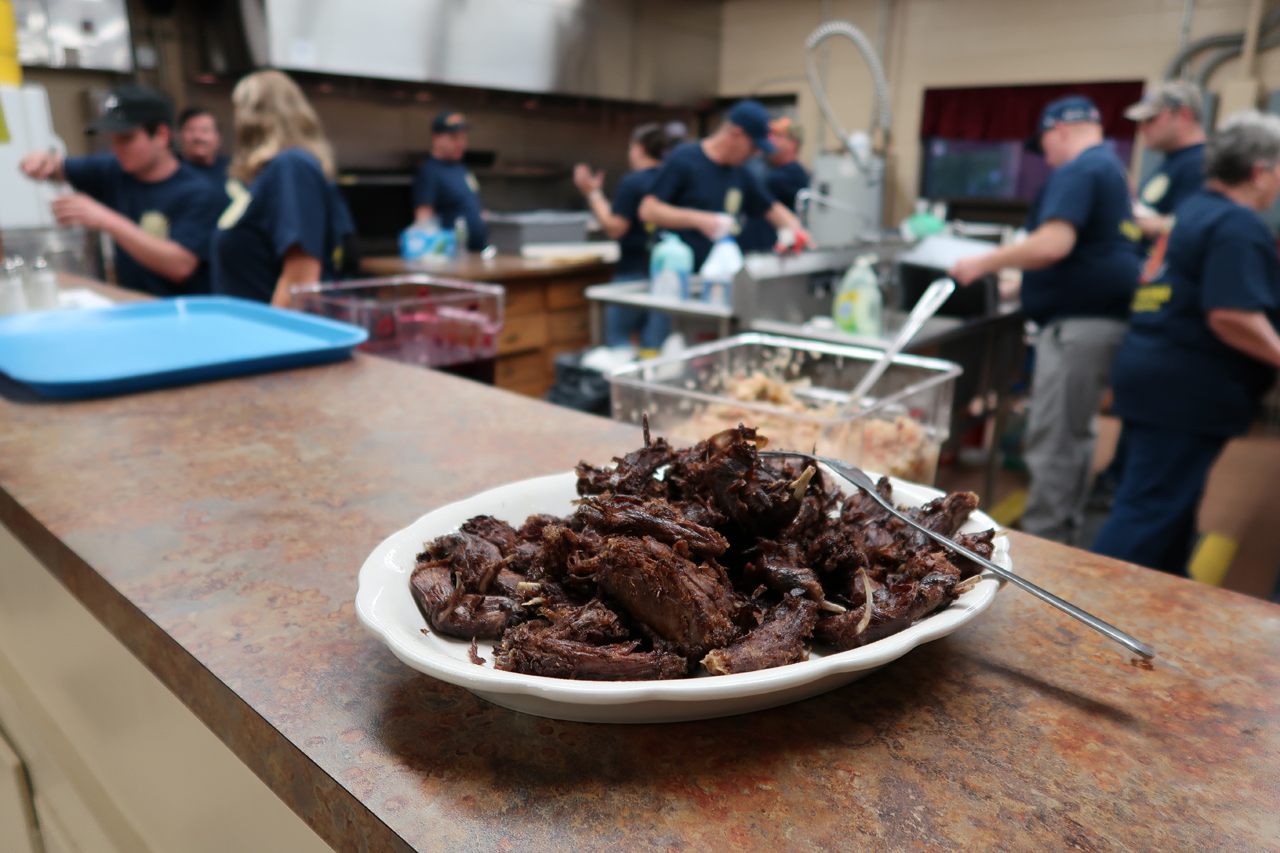 In Southern New Jersey, a curious tradition faces an uncertain future. All photos by Luke Fater for Gastro Obscura
In This Story
Destination Guide

“When people hear you’re from Lower Alloways Creek, they ask you two questions,” Jerry Prouse, Jr., tells me in the fire department’s crowded kitchen. “First they ask, ‘Do you glow?’” alluding to the town’s nuclear plant. “Then they ask, ‘Do you eat muskrat?’”

The answer to the first question is, of course, no. The town is, however, about to celebrate its 81st annual Muskrat Dinner.

On this cloudless, early-March day, hundreds of residents will soon file into the fire station to sup on marshland rodents. They may be reviled varmints elsewhere, but here in Southern New Jersey, well-posed muskrats adorn murals and town fire trucks. The critter, whose pelt once fueled a lucrative local industry, is woven into the town’s identity. Turns out it deep-fries well, too.

“I’ve been coming to these dinners all my life,” says Art Plummer, 77, the most senior member of the volunteer fire company, as he prepares the coffee machines. He’s what’s known as a “Cricker,” meaning he was born and raised here in the marshlands where the Delaware River meets the Atlantic. “The dinner you’ll see tonight’s same as dinners I grew up on.”

Locals of all ages slowly fill the banquet hall to near capacity—a patchwork of camo, flannel, and denim faded by genuine labor. Some stop to buy t-shirts bedecked with a muskrat wearing a fireman’s hat and holding a hose, as if to save its marshland home from an electrical fire.

“Man, I love the muskrat dinners,” says Plummer, smiling upon a swelling sea of longtime friends, neighbors, and family. “I hope it don’t stop, least while I’m still around.”

Muskrat once fed the region far more than an annual dinner. Since the 1920s, trappers from around the Delaware River Watershed made a living by selling pelts to overseas markets, where they became jacket liners, hats, and even teddy bears. (Many Canadian mounties still wear muskrat-lined hats, which the force considers ideal for keeping its officers warm.) The trade was often lucrative: A third-generation trapper showed the Philadelphia Inquirer records showing his grandfather made $11,299 in the 1926 season—that’s equivalent to roughly $165,000 today.

The leftover meat became the dinners that persist today. Neighboring towns Salem and Elsinboro have annual dinners too, but L.A.C.’s is the largest. Outside the station, the parking lot is filling rapidly.

But the bedrock industry wasn’t bulletproof. As synthetic-fur alternatives emerged in response to animal-rights activism in the 1970s and ‘80s, demand for muskrat pelts abated. In 1981, 3,125 registered trappers culled around 290,000 muskrats. By 2015, the 1,340 remaining trappers harvested a mere 17,000. The Clean Water Act of 1972, ironically, didn’t help either. According to Andrew Burnett of the New Jersey Division of Fishery and Wildlife, less pollution throughout the Delaware River led to an explosion of native eagle, mink, and coyote populations across the marshland—bad news for supple, defenseless muskrats.

“They got no friends in the marsh,” says one firefighter over a warming deep-fryer. “Muskrat’s everything’s favorite food.”

While muskrat is no longer the cash cow it once was, you wouldn’t know it from the annual dinner. It sold out in two days this year-–Plummer says it’s always been that way. The running town joke is that the only way to get a ticket is if someone dies.

As the diners take their seats, the kitchen begins churning out platters of sides: green beans, sliced beets, peppered cabbage hash, potato salad, and dinner rolls. It’s an 80-year-old menu, and the sides are as fixed as the people assigned to them: The woman scooping cabbage has done so for years, same as the young man tasked with plating green beans.

The purists, however, will pass on sides altogether. They go all-in on muskrat.

Preparing the muskrats is no small feat—the fire department butchers the animals themselves, then parboils them with onions, old bay, and “secret sauce” to cut the gaminess while tenderizing the meat. The legs are then finished in the deep-fryer. They figure each person will eat four rodents; 820 muskrats should feed the 200 in attendance this year.

The banquet hall’s limited space calls for seatings every hour, from 3 p.m. to 5 p.m. Still, tonight’s affair is dwarfed by dinners of yesteryear, which drew 500 people and demanded over 2,500 muskrats.

The appetite is there. The sourcing, less so. To put on the dinner, the L.A.C. fire department buys muskrats from the few fur trappers who still take on the frigid, muddy task of trapping the creeks from December to March. A goodly representation of area youths in the dining hall indicates that South Jersey’s younger generations have inherited a taste for muskrat, but firehouse chief Steve Fisher worries trapping may be lost on them. “You got the kids on their iPads and all that, parents aren’t taking them out in the outdoors anymore.” He says he bought his own motorboat and started a trapping business on his own in seventh grade. Today, he’s one of the last full-time trappers left.

Fisher himself is working on getting his two teenage children and their friends into trapping. His eldest son needs no nudging. Last year, Fisher passed on the chairmanship of the dinner to his 24-year-old son Kyle, who now oversees the feast.

But the decline in trapping remains an economic reality. While his father came from an era of “crab all summer, trap all winter,” Kyle must now add taxidermying to the mix to make ends meet. Every season is more precarious than the last, and this year, he says, was especially trying. His biggest customers, Chinese fur traders, were banned from travel at the onset of the coronavirus pandemic. “They’d usually come to the fur auctions in Toronto,” he says, “now nobody can tell what the prices are gonna be this year.” Kyle’s generation may well witness muskrat-trapping in the marshes of South Jersey transition from livelihood to anachronism. “It’s just an excuse to get out in the meadows now,” he says.

Still, the dinner goes on. While he’s confident he procured sufficient meat this year, 2018 was different. An especially tame trapping season meant the fire company was forced to cancel the dinner for the first time. “There were a lot of upset people,” he says.

While many quirky local traditions are lost to modernity, Lower Alloways Creek’s love for muskrat remains steadfast. It’s the mascot of the elementary school, and plastered around town on marquees and murals. A town-wide, person-to-person muskrat market helps keep trappers in business and sates appetites the rest of the year. Kyle says the Super Bowl tends to be a busy time of year.

Faced with the uneasy prospect of not having enough muskrat to sustain future dinners under his chairmanship. Kyle is resolute. “I’ll do everything in my power to get those meats,” he says.

The evening crescendos with the serving of the main course, as storied as it is divisive. “It’s an acquired taste,” says one woman with the Ladies Auxiliary. “One I’ve yet to acquire.”

Donald Hymer, however, is a muskrat evangelist. “It’s probably the cleanest animal you’ll ever eat,” he says. “They don’t eat nothing but roots.” Indeed, a tinge of marshland mingles with the smokiness of the deep-fried game meat to create an incomparable scent. It permeates the room as a veteran volunteer unloads gloved fistfuls of fried, bony legs onto a parade of plates, the letters “L.A.C.” tattooed prominently on his forearm. Kyle bounces from the kitchen to the dining hall, greeting customers up front and lending a hand in back.

The dark meat chews like roast beef, with a flavor somewhere between earthy and muddy. They look like darker, smaller chicken wings, with bones protruding from unexpected places. It’s bring-your-own-beverage and bring-your-own-hot-sauce, though most stick to water pitchers and the house sauce, a mild mixture of tomato juice and horseradish. I came to appreciate how the vinegary pepper cabbage cut through the rodent’s rich, dark meat.

Scheduled seatings be damned, the diners come and go at their leisure, forcing the kitchen into an hours-long montage of frying, scooping, and cleaning punctuated by the easy banter of decades-old friendships. Cakes from the Ladies Auxiliary hit the tables next to folks just starting out on their sides.

While the dinner slows with the sun setting over the marshland, the men mill about their posts, feigning business but really just enjoying each others’ company. I ask one firefighter about how well the meat holds up in the refrigerator, who shouts it over his shoulder to his comrades, inciting a barrage of answers shouted back at me. “There you go,” he says, while diving one last time into a deep tray of fried muskrat.

Families and friends wrap up group photos before the mass of firefighters and helpers put out the leftovers and enjoy their fill. The ritual is so practiced, the dinner so ingrained into the town culture, that I quickly forget that the catalyst for such revelry is a rodent.

While it may not tempt the general public, muskrat binds this small town to a bygone era as much as to one another. “Muskrat’s not for everyone,” says Prouse, Jr., as the firefighters close shop. “But we’re okay with that.”

It's a competitive team sport.
science

A past global staple you've never heard of, maslins are poised for a comeback.
restaurants

They're fueling a new approach to traditional cuisine.
food

All around the world, bakers are making paska in solidarity.
List

If you own your property, why not bedazzle it?
Video

Prank calls to this place, originally the "Tube Bar," inspired the creation of a Simpsons character.
Rio Grande, New Jersey

Come for the Italian food, stay for the taxidermy and giant statues.
Hamilton Township, New Jersey

Step into Monet's world at this fine-dining restaurant in the middle of a New Jersey sculpture park.
Jersey City, New Jersey

This unassuming retro burger joint was billed as “diner of the future” at the 1939 World's Fair.
Atlantic City, New Jersey

If it feels like a speakeasy, that’s because it probably was one.
Want to see fewer ads? Become a Member.
From Around the Web
THE GASTRO OBSCURA BOOK
Taste the World!
An eye-opening journey through the history, culture, and places of the culinary world. Order Now