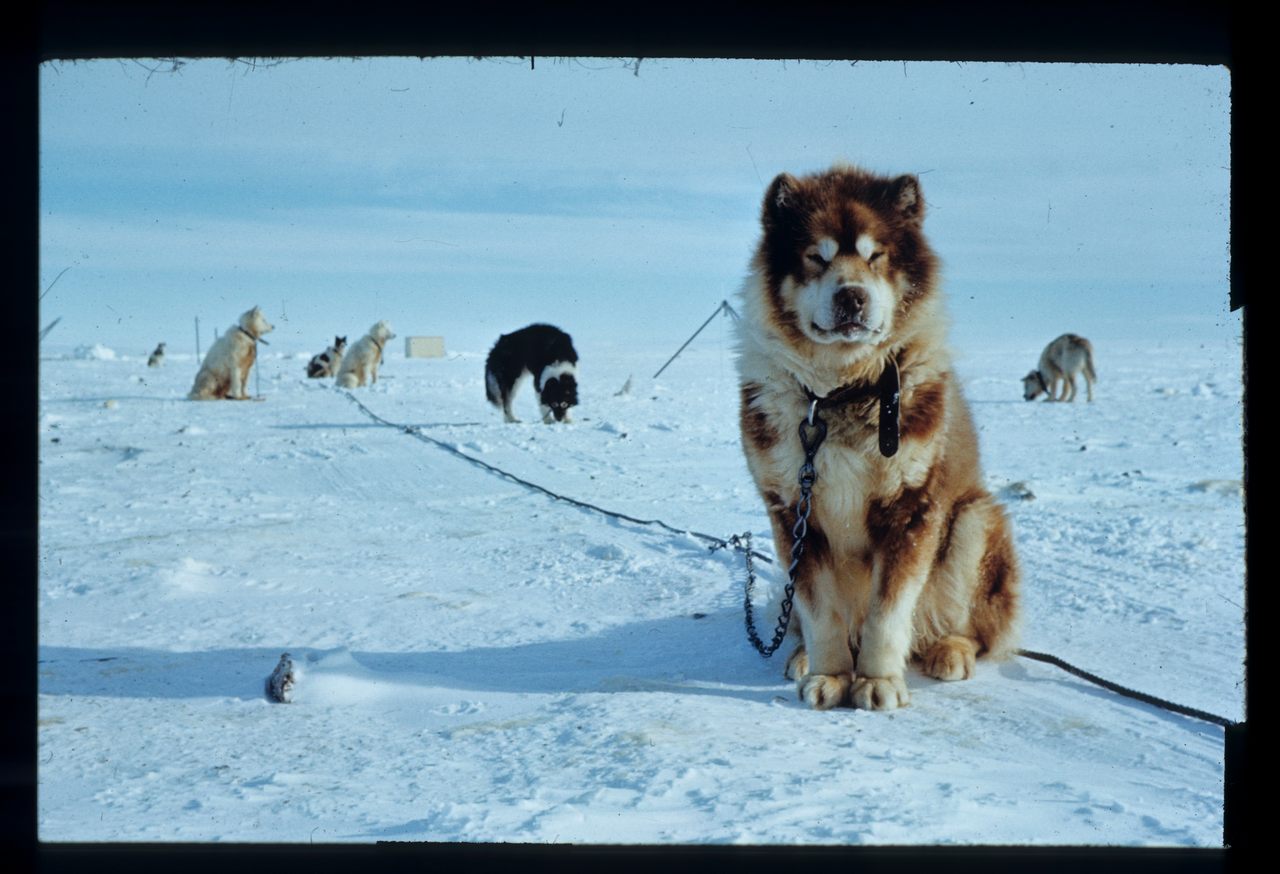 In the archives of the British Antarctic Survey in Cambridge, England, there is a green metal box, a miniature filing cabinet with two drawers filled with rarely seen 5-inch by 8-inch index cards, most bearing the picture of an adorable dog. These are the employment records of the hundreds of sled dogs that worked on behalf of Great Britain in Antarctica from 1945 to 1994, and each one tells the story of an intrepid, furry explorer in a dangerous and punishing place.

Dogs played an integral part in exploring the unknown continent. It was a team of sled dogs that propelled Roald Amundsen to the South Pole in 1911 and when Great Britain began its sustained occupation of the Antarctic Peninsula during the Second World War, more sled dogs followed soon thereafter to once again work as engines of exploration and scientific research.

The community of sled dogs began when 25 huskies from Labrador, Canada, arrived at the British base at Hope Bay aboard the SS Eagle in 1945. These four-legged explorers would help base commander and fellow Canadian Andrew Taylor expand the program of scientific research there. More dogs were brought from Canada in the following years, but BAS also bred their dogs.

Without engine-powered snowmobiles or aircraft suitable for the rough conditions, dogs were needed to take men and equipment into remote corners of the hostile, and oftentimes uncharted, landscape. They were invaluable assets in Antarctica, and as such, detailed records were kept about their service.

The front of each card in the British Antarctic Survey archive includes basic information: the dog’s name, service number, sex, date of birth, and parentage. It also has a brief medical history and, most interestingly, a section for good and bad character traits. A photograph is usually stapled to the front of the card. If there was no photograph available, someone would draw the dog’s markings for identification. The reverse side lists the dog’s working history, base transfers, and progeny. A summation of trips might read, “1960, 1,700 miles.”

A look at the comments section on the front of the card reveals much about what was desirable or not in these dogs. Praise might come in the form of “good worker,” “pleasant character,” or “well built.” One such good dog was Guinness, a large dog with a dark coat and white underbelly. He earned the following reviews in the early 1960s: “Best of brothers, pulls ‘till exhaustion. Deputy leader.” The following year, Guinness received an annual review declaring him to be “The ideal dog. Good natured, strong, and a short, even coat.” From 1960 to 1964, he totaled 4,934 miles of sledging.

It is under the heading of bad characteristics where things get curious and, at times, unfair. A dog might be viewed negatively for being a “bully” or “lazy” or, in one case, a “shameless flirt.” Joseph, a light-colored husky with cock-eyed ears born to Spark and Maggie on August 12, 1953, was apparently “inclined to be distracted by seals, etc.” The performance of Jock I, with his long fur and curly-q tail, was summed up in a single phrase: “short legs.” Poor Jock. He couldn’t help it.

And Gandolf, a squat, camera-shy dog, got the good and bad in equal measure in his feedback. Under good, he was lauded as a “very hard worker.” Under bad, “Daft as a brush.” Sweet, diligent, but apparently dumb Gandolf.

Antarctic sled dogs worked hard to earn their rations of seal blubber and canned meat. They certainly sacrificed themselves for the cause of exploration, a concept which they had no grasp of beyond pulling heavy loads, oftentimes hundreds of pounds of equipment, supplies, and the men themselves. Sadly, the overwhelming majority of dogs who served in the Antarctic died painful, oftentimes grizzly deaths.

Guiness, the ideal dog, drowned in January 1966. Gandalf was killed in a crevasse accident at the age of six. No reason was given as to why Jock I, the dog with short legs, was shot in April 1955, when he was less than two years old, but the death of Joseph, the dog so easily distracted by seals, may shed some light on Jock’s fate. The last entry on Joseph’s personnel file read, “Destroyed 24/2/61 - useless.”

The dogs were there to work, not to be pets. Still, many of the men who worked with them over the decades cared deeply for them. David Dagliesh, a doctor on Stonington Island from 1948 to 1950, went on many long sledging journeys with the dogs.

“They were marvelous animals, tough as they come,” Dagliesh later recalled in an oral history interview. “Our lives depended on them and theirs depended on us.”

Slowly, though, dogs were phased out of the Antarctic workforce, replaced by snowmobiles, helicopters, and other less furry means of transportation. The British Antarctic Survey effectively stopped using sled dogs at their bases in 1975, though some dogs were kept at Rothera Research Station, where they boosted the morale of the staff.

The majority of the dogs were not so fortunate. They had never been domesticated, and the British Antarctic Survey could not transport them to Britain. Instead, the remaining dogs were killed in 1975.

David Burkitt, who worked at the British Antarctic Survey for close to 30 years and was stationed at four different bases, recalled the brutal culling, which he and many others on the bases objected to. “You think those poor beggars had worked their hearts out for you. So it was a bit of a nasty business.” Some men wept openly at the news.

In 1994, the British Antarctic Survey removed the 14 remaining dogs from Rothera Research Station, descendants of the dogs who’d been spared in the culling, in accordance with the Antarctic Treaty Environmental Protocol. They eventually were sent to Canada. The last two of these adventurous dogs died of natural causes in 2001.

Today, a bronze statue honors the lives and work of all the sled dogs that served in Antarctica. It stands outside the Scott Polar Research Institute, just a short bus ride from British Antarctic Survey archives. The statue is a small reminder of how much these four-legged explorers accomplished in Antarctica. As much credit is due to them as their two-legged colleagues.

The Duck Brigade Behind a Farmer's Plentiful Rice Harvest

A vitamin deficiency may have changed the course of a continent's history.
exploration

For more than a century, their stories were ignored—until now.
exploration