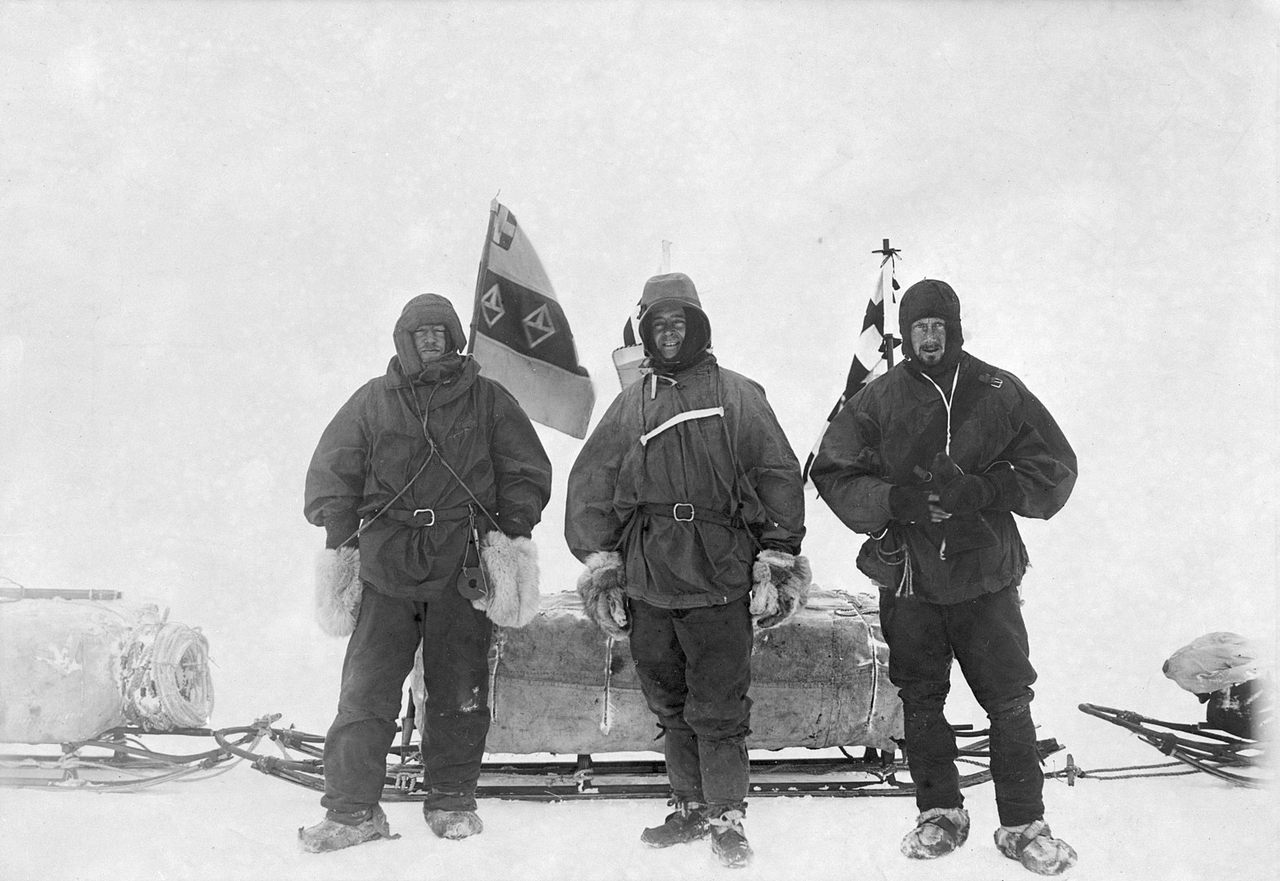 Ernest Shackleton, Captain Robert Falcon Scott, and Edward Wilson (right to left) as they were preparing to explore the Ross Ice Shelf as part of the British National Antarctic Expedition in November 1902. Unidentified Photogapher, National Library of New Zealand/Public Domain
In This Story
Destination Guide

Across the white expanse of Antarctica’s Ross Ice Shelf, three figures moved north toward the open water beyond their horizon, and the ship that waited for them there. It was January 1903, and the bright sun of austral summer would not set. A skua, one of the large brownish-gray seabirds common around McMurdo Sound, might have surveyed the trio from overhead, assessing whether there was anything of interest on the sled that two of them pulled. The inquisitive birds often divebomb human interlopers on their continent, and claim whatever they can carry off.

The bird would not have known it was looking down at giants in the saga of British polar exploration: The two men pulling the sled were Robert Falcon Scott and expedition doctor Edward Wilson, both of whom would die on that same ice shelf nine years later as they returned from the South Pole. Beside the sled, a younger man kept pace on skis. Wilson had noted in his journal that this third man suffered bouts of breathlessness and, frequently overcome by weakness, could not be counted on to pull the sled. The young man’s name was Ernest Shackleton. The man who would become legendary in polar exploration was then on his first expedition to Antarctica and, according to new research, suffering from beriberi, a nutritional deficiency more commonly seen in the tropics. Young Shackleton’s bout with beriberi, contends the lead author of the new paper, changed the course of Antarctic history.

Shackleton would return to Earth’s white underbelly twice more, leading expeditions in 1907 and 1914, and he was setting out on another when he died in 1922 at age 47. The story of his leadership during the Endurance saga from 1914 to 1916 remains one of the best known adventures of the era. The man whose singular will earned him the nickname “The Boss” managed to bring every member of his crew home safely despite losing their ship to the ice, surviving for months on shifting floes, navigating 800 miles of roaring Southern Ocean in an open lifeboat, and crossing an uncharted mountain range on foot.

“He was, obviously, a tremendous character, in many ways, physically very powerful,” says retired anaesthetist and Antarctic medical history buff Ian Calder, who calls Shackleton a boyhood hero. “The thing that puzzled me was that he always seemed to be conking out.”

In truth, Shackleton’s entire Antarctic career was marked by strange episodes of weakness, breathlessness, and other incapacitating symptoms. His near-superhuman feats coexisted, according to expedition notes, with an occasional inability to stand on his own. While his early death has been widely attributed to heart disease brought on by years of heavy smoking, Shackleton’s intermittent bouts of weakness in his youth have intrigued historians, doctors, and armchair medical detectives for decades. Many believe the explorer suffered from some kind of congenital heart defect. In 2016, for example, Calder and colleague Jan Till published research in the Journal of the Royal Society of Medicine that outlined evidence for Shackleton having recurrent dysrhythmia or, as Calder puts it, “His heart was going into a funny rhythm for a time, for days or hours.” The condition, Calder adds, was most severe in 1903 but recurred throughout Shackleton’s life—typical of people with relatively benign forms of the cardiac condition.

In a recent Journal of Medical Biography paper, however, physician Paul Firth and his colleagues suggest beriberi, a severe thiamine (also known as vitamin B1) deficiency, was Shackleton’s 1903 mystery malady, and that, counterintuitively, it set the explorer on a course for greatness. After his struggle on the Ross Ice Shelf in 1903, Shackleton was considered unfit for duty with the British National Antarctic Expedition. On his return to London, The Boss went to work raising money for his own attempt at the South Pole. “On his second expedition, on the Nimrod, he set out for the South Pole and narrowly failed to get there, but that’s when he became famous,” says Firth. “It was the thiamine deficiency that started him on his path as an independent explorer. If he hadn’t had beriberi he wouldn’t have made his own way, as a leader.”

Firth, a pediatric anesthesiologist at Boston’s Massachusetts General Hospital by day, got hooked on Shackleton’s medical mystery nearly a decade ago while studying the history of extreme exploration. At least some of the problems Scott and other members of the 1903 Discovery expedition experienced were diagnosed at the time by Wilson as scurvy, a severe vitamin C deficiency—though the symptoms, including swelling of the extremities, fatigue, and muscle weakness, are also common in people with beriberi. By poring through physicians’ records from polar exploration throughout the 20th century, however, Firth found diagnosed cases of beriberi on later expeditions. He notes that the Discovery expedition’s doctor, Wilson, enigmatically wrote “beriberi” in his notes but never made that official diagnosis—perhaps because the expedition was British, and in Antarctica. Beriberi was first identified in Asia, is more commonly associated with tropical seafaring and diets heavy on white rice.

“Nutritional deficiencies are all over the world. But there are differences in diets,” says Firth. “Beriberi was predominantly in the Far East and Southeast Asia. So, when it presented down in Antarctica, what they recognized was scurvy, because they were Europeans. They didn’t recognize it was beriberi because they were thinking like Europeans.”

Today, beriberi is much less common in most parts of the world where diets include natural sources of thiamine, such as fresh meat and fish, whole grains, legumes, and fresh fruits and vegetables. Breakfast cereals and flours are also often fortified with the vitamin. Historical geographer Ed Armston-Sheret, who studies health and medicine during exploration in the Victorian and Edwardian eras at Royal Holloway, University of London, is not surprised at the new findings, given the lack of fresh food available to Shackleton and the others. “When you look at their diet, it’s just a recipe for nutritional deficiencies,” says Armston-Sheret, who was not involved in the research. In 2019, he wrote about the contemporary understanding of scurvy during the Discovery expedition, when Shackleton fell ill on the Ross Ice Shelf. “Vitamins aren’t discovered until after the first World War, and scurvy, as it was understood in Edwardian times, was quite vaguely defined,” says Armston-Sheret. “If you look back through the sources, it’s not that uncommon for people to say something was scurvy though we’d now call it beriberi.”

Armston-Sheret is not convinced, however, that beriberi was behind Shackleton’s mysterious 1903 episode. “The hard thing to explain,” says Armston-Sheret, “is why Shackleton was more badly affected than either Scott or Wilson, who were with him. They were broadly eating the same diet.”

Calder, who also was not involved in the new research, found Firth’s conclusions “good, fun, and worthwhile reading.” He adds: “Paul’s thrust, that we’ve concentrated on scurvy to the point of pushing beriberi into the background, is quite right.” But Calder also believes the paper doesn’t rule out that Shackleton had a lifelong heart condition. “After the Discovery expedition, Shackleton had to finance all his expeditions himself,” says Calder. “He was very dependent on going to rich people to give him money. And if there had been some suspicion that there was something wrong with his heart, it would have scuppered his chances. So he would have had to hide it, I think.”

Despite accounts of Shackleton avoiding physical exams, Firth disagrees. “He got better [in 1903], and he just thought well, I had bad scurvy,” says Firth. “It was the subsequent historians who then alleged he was hiding a condition and didn’t want to be seen. That he was just a young guy who didn’t want to see the doctor is a more reasonable explanation.”

Calder, however, points to more than half a dozen documented episodes in Shackleton’s later expeditions that suggest the explorer’s troubles in 1903 were from more than beriberi. During the Nimrod expedition of 1907–09, Shackleton experienced similarly incapacitating symptoms on the voyage to Antarctica—even though fresh meat, an important source of thiamine, was a key part of that expedition—and again during the overland traverse. “Then after a couple days he seems to have recovered and performed extremely strongly thereafter,” says Calder. “There was no dietary change, he just got better.”

Despite the new research, it’s likely that the mystery of Shackleton’s health, like the explorer’s iconic status, will endure.

Indigenous ties to the bottom of the world go back more than a millennium, and could point the way forward.
antarctic

Join us for a daily celebration of the world’s most wondrous, unexpected, even strange places.
Video • Gastro Obscura