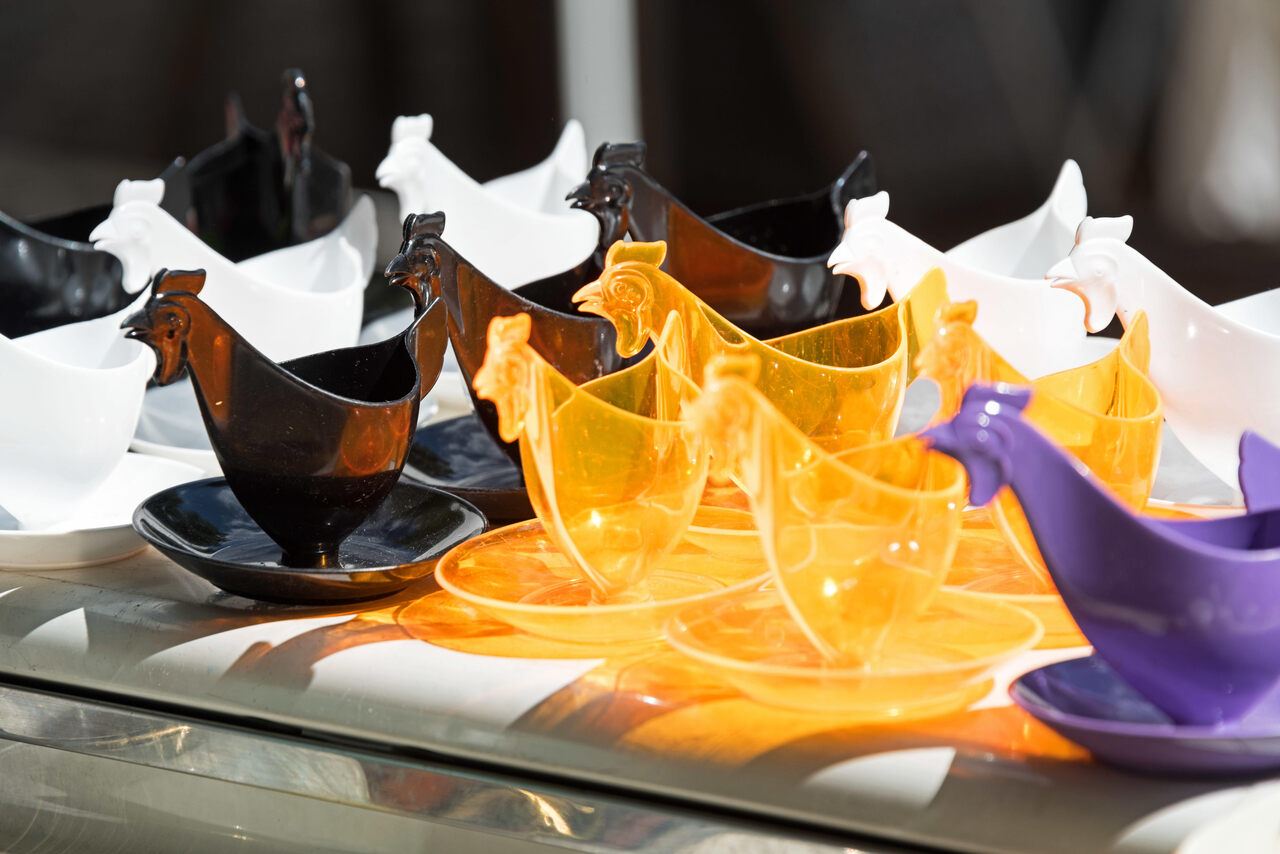 Plastic items, like these eggcups, were ubiquitous in the German Democratic Republic. Now museums are trying to preserve these surprisingly fragile artifacts of the Cold War. Jennifer Booher/Alamy
In This Story
Place

Home to secret Eastern Bloc spy equipment and the largest stretch of the original Berlin Wall outside of Germany.

In the 1960s, many East Germans ate their soft-boiled eggs out of colorful plastic eggcups shaped like chickens.

Manufactured in Wolkenstein, a tiny town in Saxony, the popular Huhn eggcup came in cheerful shades of blue, green, yellow, red, and orange, allowing consumers to mix-and-match at breakfast according to their fancy. In all likelihood, the neighbors down the hall in the Plattenbau—a type of prefabricated apartment block still found throughout the former German Democratic Republic—were using the same eggcups, and perhaps sitting in the same molded polystyrene chairs at the same Sprelacart laminated table.

For decades, these and other ubiquitous plastic objects shaped daily life in the GDR. Today, those that remain in attics, junk shops and a handful of museum collections offer a glimpse behind the Iron Curtain—at least for as long as people can figure out how to keep them from disintegrating.

“In the GDR in the ‘60s, there was a big enthusiasm toward plastics as a kind of material which solves problems, and which gives new opportunities,” says Tim Bechthold, head of conservation at Die Neue Sammlung. The Munich design museum is home to one of the world’s largest collections of GDR plastics with about 1,000 objects. “They had a vision of plastic houses, things like that, which they made great attempts to build.”

While die-cast plastic houses never actually made it off the pages of the popular communist primer Unsere Welt von Morgen (“Our World of Tomorrow”), the GDR’s state-owned factories were leading producers of plastics, including toys, furniture, household goods, and even a car, the notoriously unreliable Trabant, which were exported across the Eastern Bloc and even sometimes to the West. The communist government had practical reasons for promoting plastic—although the country had few natural resources, it did have petrochemical expertise and a reliable supply of Soviet oil. But the GDR’s vision of a plastic world that was convenient, hygienic, and modern was also entrenched in ideas about the scientific superiority of socialism, and the state’s ability to provide accessible plastic consumer goods played an important role in official propaganda.

While East German plastic once represented a utopian future, however, today the most notable examples are half a century old, and their caretakers are increasingly concerned about how to preserve this material culture for future generations. That’s why this year Bechthold and his colleagues at Die Neue Sammlung, in partnership with other institutions in the United States and Germany, began a project to conserve East German plastic objects and contribute to a growing body of research about conserving petroleum-based synthetics in general.

The team, which also includes curators and scientists at the Getty Conservation Institute in Los Angeles, the Wende Museum of the Cold War in Culver City, and Germany’s Cologne Institute of Conservation Sciences, will examine some 300 objects, ranging from furniture and TVs to hair dryers and toy doctor kits, and investigate how manufacturing techniques, use, and storage conditions influenced how they have held up over the decades.

“Most of the time, research in the conservation of plastics focuses on works of art,” says Anna Laganà, a conservator and researcher at the Getty Conservation Institute. “This is a fantastic occasion to study a design collection and to learn about mass production in general.”

The difficulty of preserving plastic may seem counterintuitive to people more used to thinking about the opposite problem—mass-produced plastic, which isn’t biodegradable and has the potential to linger forever as an environmental pollutant, is in some ways a little too durable. But over the long-term plastic is also a fairly fragile material. Its colors fade. Some plastics become brittle, shrink, or crumble. Others show “crazing,” a stress effect that looks like a web of tiny cracks. These patterns of deterioration depend on the type of plastic and how it is manufactured, used, and stored, and preventing the damage requires understanding the material at a molecular level.

It’s important to recognize that “plastic” doesn’t just mean one thing, Laganà explains. Many East German objects are solid polystyrene, a hard and relatively cheap material used, for example, in the chicken eggcups. Durable, versatile polyethylene—today the most common type of plastic worldwide—was used in the GDR for buckets and laundry baskets, while polyamide fibers could be found in clothing and furniture.

To help identify all these different polymers, the research team is using a non-invasive handheld* Fourier-transform infrared (FTIR) spectrometer, which detects the wavelengths of light absorbed by a material. Later, they may conduct more in-depth material analysis to determine which other components—plasticizers, dyes, additives—were used in manufacturing. (“In that case, we’ll need to take some samples, but the samples are really small,” Laganà says.)

Ultimately, the research will inform a plan for preserving these objects, including ideal light, temperature, and moisture conditions. The project team intends to produce a manual that would be useful for collectors, conservators, and museums that handle GDR plastics, and they hope to mount an exhibition, likely in 2023, that will show viewers how plastic shaped East Germans’ lives.

“This sort of material culture gives you a much more nuanced view of that time than if we were only looking at propaganda posters and spy materials,” says Christine Rank, head of collections at the Wende Museum. “Of course, there are also bigger implications—questions of trade and economy. There’s a lot of that kind of information you can get out of these little objects, which I think is really cool.”

They can also reveal how memories of a troubled era evolve over time. In the three decades since Germany’s two halves were reunited, GDR plastics have featured prominently in the phenomenon of Ostalgie, or “nostalgia for the East.” Those chicken eggcups are a popular flea market item, while the polyurethane Garden Egg Chair, an icon of design created in West Germany and manufactured in the GDR in the 1970s, now sells for thousands of dollars.

Ostalgie can be controversial—some historians decry popular interest in the quirkier aspects of East Germany, noting that the GDR was in fact an oppressive regime. But focusing only on the oppression also risks oversimplification, says American historian Eli Rubin, author of the 2008 book Synthetic Socialism: Plastics and Dictatorship in the German Democratic Republic.

“I think our view of life in East Germany as being very grim is a little bit exaggerated, thanks in part to decades of anticommunist propaganda,” Rubin says. “I’m more interested in how 99 percent of people lived most of the time.”

Rubin notes that many modern Germans have complicated feelings about their history and about the everyday plastic that has come to symbolize a time and place they may now consider a bit embarrassing “They’d say, ‘I don’t know why you’re interested in that crap. I left all that stuff behind,’” Rubin says. “But some people were like, ‘Oh no, that stuff was great. I wish I hadn’t thrown it out.’”

For his part, Rubin is glad to hear of the new effort to preserve GDR plastics. “Visiting Germany, seeing the stuff in person, being able to see it from all the different angles, to see how different kinds of light reflect off it—that just opens up completely different pathways in your mind and changes how you understand the past,” he says. “East German polyurethane isn’t going to last forever, but if you protect it, it could last a very long time. And 200 or 300 years from now, this stuff’s going to be priceless.”

Correction: This article was updated to make it clear the research team is using a handheld spectrometer.

Inspired by the Bayeux Tapestry, artists and embroiderers in a Newfoundland village commemorated a lost way of life.
medical museums

Join us for a daily celebration of the world’s most wondrous, unexpected, even strange places.
world record

The dusty, rusty site in eastern Wyoming is a rare relic of the 20th-century petroleum boom.
Video • AO Docs