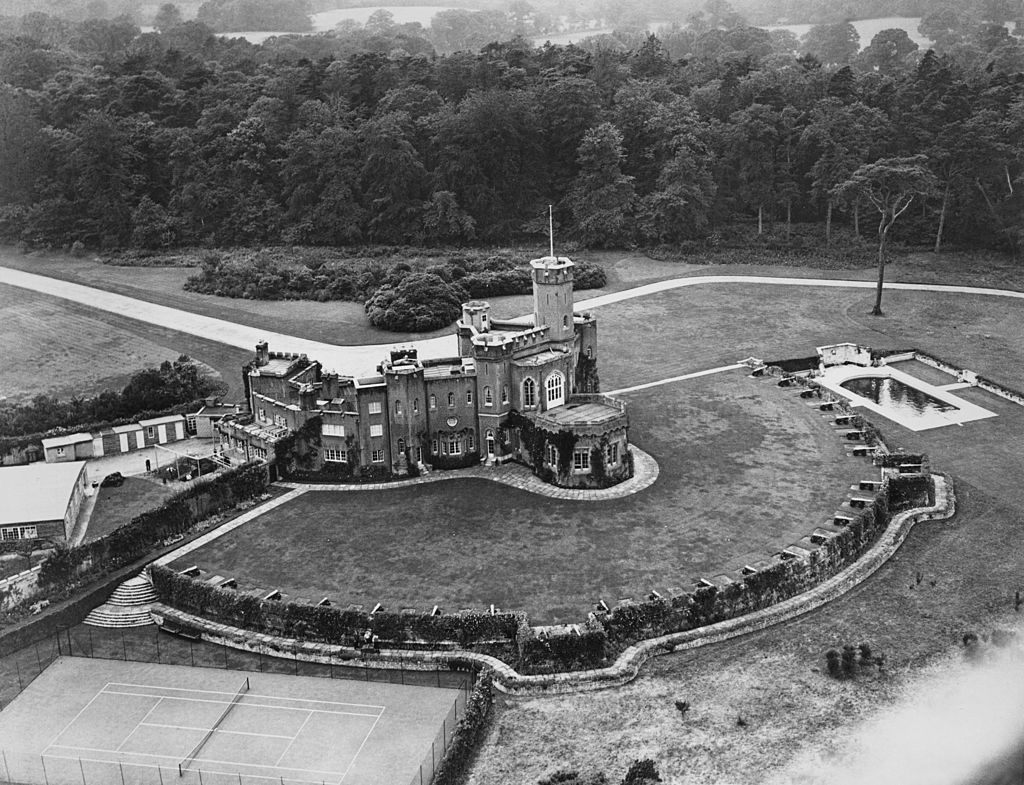 Fort Belvedere from above. Central Press/Hulton Archive/Getty Images
In This Story
Destination Guide

King George V didn’t understand why his son, Edward, Prince of Wales, even wanted the place. To George, Fort Belvedere in the southeastern English county of Surrey was dilapidated, unsuited to the pomp and political horse-trading of the London court. To Edward, it was an escape—the opposite of his residence in London’s St. James’s Palace, which was “more an office than a home,” he wrote in LIFE magazine.

The fort was an official holding of the Crown Estate on 59 acres, so it’s not like Edward was simply waving “Cheerio!” to the privileges of his noble birth. The prince quickly set about sprucing up the place—installing a swimming pool, a tennis court, even a Turkish bath. Through lavish parties, he turned the estate into a kind of English West Egg, with a recurring guest of honor: Wallis Simpson, an American who spent her first weekend at Belvedere in 1932. Edward became King in early 1936, but his desire to marry the soon-to-be-twice-divorced Simpson put him at odds with his ministers and the Church of England. Just 11 months after assuming the throne, Edward abdicated, and about six months later he married Simpson. (Edward’s brother became King George VI, whose daughter Elizabeth is the longest-serving monarch in British history, at 67 years and counting.)

So it’s fitting that Fort Belvedere served as the site of Edward’s abdication on December 10, 1936. The following day, when he was no longer King, Edward delivered a speech that the BBC broadcast on the radio. A copy of that speech, signed by Edward himself is now up for auction—along with one of Wallis Simpson’s white gloves—and is expected to sell for at least $3,000. This copy of the speech is addressed, “with best wishes,” to Walter E. Edge, an American diplomat who twice served as Governor of New Jersey and represented the state in the Senate. It is signed not by a King, or a Duke, but simply “Edward.” The fort remains a royal holding today, though there doesn’t appear to be a lot of sentiment about it as the former residence of a king. It’s occupied by a Canadian billionaire.

In the speech, Edward struck a modest chord, assuring the British people that “I have made this, the most serious decision of my life, only upon the single thought of what would, in the end, be best for all.” He also pledged to offer his dethroned services to the nation.

Well, today Edward is perhaps most remembered not only for his ardent love and the abdication crisis it spawned, but also for his post-abdication association with Nazi Germany. At best, the relationship was far too cozy, with Hitler lamenting Edward’s abdication as “a severe loss for us,” and with Edward and his wife visiting Germany as the dictator’s guests (with photos to prove it). At worst, the relationship might have been outright collaborationist: Contested documents allege that Edward supported “continued heavy bombing” by Germany in order to “make England ready for peace.”

How Do You Convince 125 Million People to Embrace Wolves?

Winning bidder take note: It is not safe to drink.
prisons

A look inside the mind of a legendary plot.
world war ii

For Sale: A Tricky Cipher Machine From WWII

"I’m an American" was the U.S. government's attempt to promote tolerance in the run-up to World War II.
Video • AO Docs