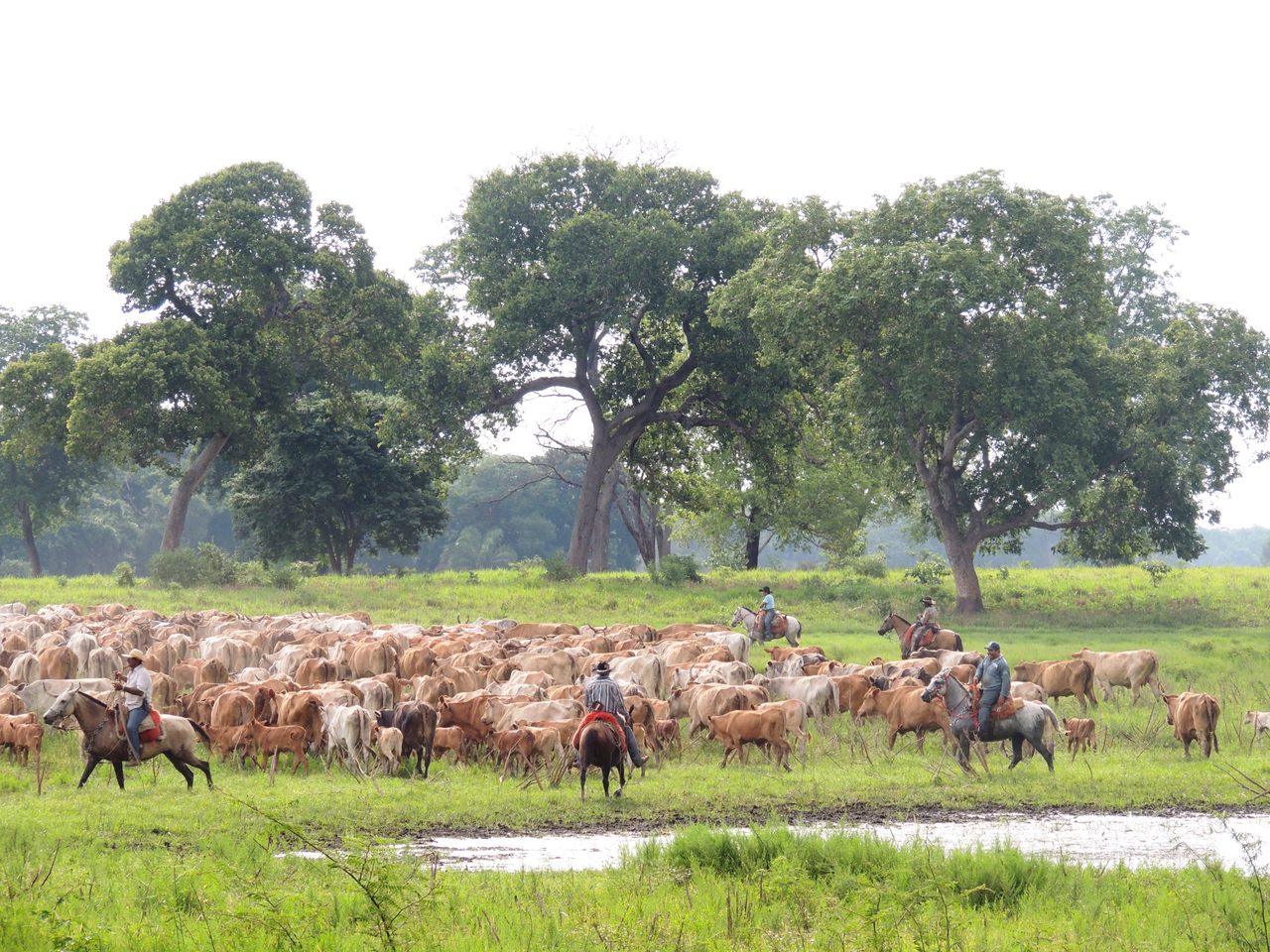 Pantaneiros are rounded up to be returned to the farm for milking and health checks in Aquidauana, Brazil. All photos courtesy Marcus Vinicius Morais de Oliveira
In This Story
Destination Guide

The herd of Pantaneiro cows wade through the flooded plain, before stopping to graze on a patch of lush vegetation. Their coats range from light cream to a deep chocolate. Some have deep claw marks on their flanks, yet their long, curved horns help ensure jaguar attacks result only in scars. These Pantaneiros (sometimes known as tucura or jofreano) form part of the 50-strong herd belonging to Marcus Ruiz, a farmer and breeder in the vast tropical wetland of Pantanal, which stretches over Brazil, Bolivia, and Paraguay. Despite having perfectly evolved to their harsh surroundings, just 500 Pantaneiro specimens remain, and they’re facing extinction. A number of researchers and ranchers have a plan, though: cheese.

That’s the premise of Dr. Sergio Dani’s work. Since 2013, the geneticist has worked on the Bioma Cheese Project, which aims to promote and commercialize Nicola, the cheese made from the Pantaneiro’s milk. If enough people try and buy the cheese, he believes, this unique and scientifically important breed can be saved.

Local farmers, such as Ruiz, whose land spreads over the south of Pantanal near the border of Paraguay, have been making and enjoying Nicola cheese for centuries. Lasting up to 30 days without refrigeration, Nicola became a staple food source in the Pantanal, which only gained access to electricity in the last couple decades. During the day, while his Pantaneiros roam the swamps, Ruiz takes their milk, creates a curd, heats it again, to around 70 degrees Celsius, and then leaves it in a sack out in the open for at least a week.

The result is a cheese that’s hard on the outside and soft on the inside, with a texture similar to mozzarella. The taste is strong and unique, which Ruiz believes is due to the wild plants on which his Pantaneiro graze. He serves thick slices for breakfast with strong black coffee, and it features in regional dishes such as chipá (cheese bread), sopa Paraguaia (corn bread), and chipa guasu (corn cake).

While Pantaneiros have been raised in Brazil for centuries, they first arrived with Spanish and Portuguese colonizers, who brought several breeds of European cows with them. Over the next 500 years, natural selection allowed them to adapt to their swampy surroundings, evolving unique characteristics such as tolerance to food shortages, immunity against certain diseases and ticks, and the ability to cope with both flood-prone rainy seasons and 40-degree-Celsius summer heat (more than 100 degrees Fahrenheit).

“They are a European cow that’s 100 percent adapted to the Pantanal,” says Professor Marcus Vinicius Morais de Oliveira, a conservationist and researcher who works alongside Dani. “They are the only cow we know that breeds in flooded terrains.” Oliveira is at the forefront of The Pantanal Centre for Conservation of Pantaneiros (Núcleo de conservação do bovino Pantaneiro or Nubopan) of the State University of Mato Grosso do Sul, which aims to protect and preserve this cow.

Both Oliveira and Dani believe that the Pantaneiro’s hardy genes could be useful in the face of global warming, helping to enhance other bovine species’ genetics and ultimately provide food source security for the growing human population. While breeding them with other cattle will be beneficial, overbreeding will dilute the Pantaneiro genes. “After four to five generations, [they’re] almost gone,” explains Oliveira. As a result, growing the Pantaneiro population is essential to maintain this valuable gene pool.

Despite their favorable genes, the Pantaneiro’s numbers have dropped dramatically in the last century. In the late 1800s, the hefty Nelore, a type of zebu cow with a characteristic humped neck, arrived in Brazil. Larger than Pantaneiros and ready for slaughter in about half the time, they became the breed of choice in Brazil, which is now the world’s largest beef exporter.

“The Pantaneiro doesn’t produce so much meat in a short time, so they are condemned to extinction,” explains Dani. Almost all farmers depend on Nelore cattle as their main trade, and keep just a few Pantaneiro in small herds of up to 50, mostly for cheese and milk to use at home.

Favoring the less-well-adapted Nelore has come with an environmental toll. Since Nelore cows can’t survive on the area’s wild vegetation, Dani explains, farmers have introduced aggressive grasses from Africa that outcompete local vegetation and plants. “It’s a threat to the environment,” he says. “With the Pantaneiro cattle on the other hand, you don’t need to change anything.”

To provide farmers with an economic incentive to grow their Pantaneiro herds, Dani and his peers are trying to grow the market for their Nicola cheese. “Cheese is a very important product, he explains. “It can be preserved without much energy. You can transform 10 litres of milk into one kilo of cheese. It’s a value-adding process.”

Dani and Oliveira spearhead the Bioma Cheese Project, a consortium of researchers and national organizations, including local farmers, several Brazilian universities, and the Brazilian Association of Pantaneiro Bovines, who represent the Pantaneiro cattle ranchers. The project is part of a larger research effort conducted locally at Embrapa Pantanal (The Brazilian Organization of Farming Research), which has a conservation center on the Nhumirim farm in the heart of the Pantanal. They all work together toward one key goal: protecting the Pantaneiro in order to preserve both its genetics and local traditions.

To make Nicola cheese a popular product, a crucial first step is getting the Pantaneiro breed officially recognized by the Brazilian government, which will aid in commercializing the cheese and meeting federal food standards. Due to the Pantaneiro’s melting pot origins, though, distinguishing it as a specific breed involves a long process of genetic testing and mapping, which has been ongoing since Embrapa Pantanal started in 1984. In 2010, the Pantaneiro was declared a cultural and genetic heritage to Mato Grosso do Sul (a state in the Pantanal)—a partial step toward full recognition. Embrapa lodged an appeal with the Brazilian Ministry of Agriculture and Livestock, and Oliveira works on tasks such as registering all Pantaneiro births and deaths. By July of this year, Oliveira hopes that they will have finished the necessary work to gain recognition by 2020.

“Nicola is present in a wide range of traditional food here,” explains Ruiz, who partners with the research consortium by lending his herd for genetic studies and breeding programs. “I grew up with the Pantaneiros, and that created a lot of love for these animals and their milk. I want to maintain this family tradition and pass it on to my children.”

Since it’s made using unpasteurized milk, the Nicola cheese also has to meet tough sanitary standards—all without jeopardizing its unique selling point as an artisanal, niche product from the Pantanal. The cheese partners also hope to secure certificate of origin status that links Nicola to the area. This will require significant investment in cheese-making equipment and cleaning up production practices, which, Dani believes, farmers will be more willing to do once the breed gains federal recognition.

Dani believes the process of recognizing endangered and rare breeds, and finding an economic use for them in cheese production, can be replicated and applied to other species, such as the caracu found in the south of Brazil. “We must do this to protect the way of life of native people, local traditions and local farmers.”

For now though, visitors to the Pantanal can eat Nicola cheese at local bed and breakfasts, hostels, and farms. As for the cows themselves, they can be spotted standing shoulder-high in the water and chewing on reeds, foraging in dense thickets, or grazing in the open plains.

Join us for a daily celebration of the world’s most wondrous, unexpected, even strange stories.
music

For centuries, herdswomen have lured cows with haunting melodies.
islands

On Marajó, the buffaloes outnumber people.
Video • Object of Intrigue