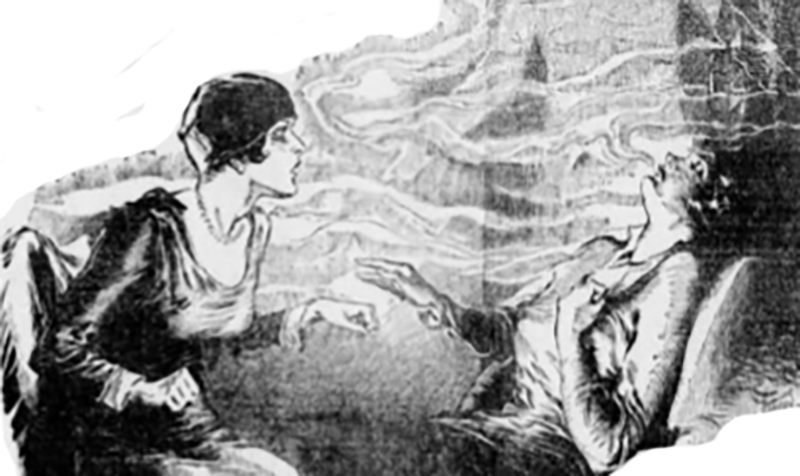 An illustration from one of Rose Mackenburg's articles for the Winnipeg Tribune. Tony Wolf

During the 1920s, the apocalyptic tolls of the First World War and the Spanish Flu pandemic caused a widespread revival of Spiritualism–the controversial practice of purported psychic communication with the spirits of the dead.

Sir Arthur Conan Doyle, creator of the famously rational Sherlock Holmes, embraced Spiritualism and became its most strident and effective propagandist. But his influence was countered by the famed magician and escape artist Harry Houdini, who put together a team dedicated to crusading against the “ghost racketeers” that posed as spirit mediums to con money out of vulnerable, grieving people.

Into this milieu stepped Rose Mackenberg, who was ultimately to become one of the most enduring and prolific ghost busters of the early 20th century. By her own account, Mackenberg grew up in New York City during the first decades of the 1900s. As a teenager, she developed a belief in Spiritualism that lasted until she was introduced to Harry Houdini, probably during the late 1910s.

When Rose first encountered the master magician, she had already been working as a private detective for several years. Their initial meeting came about when she consulted with Houdini regarding one of her own investigations, which involved a case of “spirit fraud.”

Impressed by her faculties of logic, resourcefulness and quick wit, Houdini invited Rose to join the team of about 20 salaried undercover investigators that he referred to as “my own secret service.” This clandestine team traveled ahead of Houdini’s touring schedule, visiting towns and cities where he was due to perform and infiltrating the local Spiritualist “scene” to gather evidence of fraud. These details were passed on to Houdini, who would then expose the fraudsters during his shows.

Inevitably, this tactic made Houdini and Rose many bitter enemies, angering both true believers who felt that they were attacking their religion and ghost racketeers who knew that they were threatening their livelihood. Sometimes the hostilities between pro- and anti-Spiritualists erupted into riots, and more than once Rose and other members of the “secret service” were caught up in the fray.

Partly as a safety precaution, Rose also became something of a mistress of disguise. Her first stop in a new town or city was to visit a department store and take detailed notes on the clothing worn by various local “types” of women, so she could plausibly pass muster as a rustic schoolteacher, a small-town matron or a smartly-garbed widow.

Her training with Houdini encompassed all the tricks of the fake séance trade and left her disabused of her teenage belief in the ability of mortals to communicate with the spirit world. Like her employer and mentor, Rose Mackenberg professed some sympathy for those mediums who genuinely believed in their own powers and who practiced Spiritualism sincerely, devoid of conscious charlatanism. Also like Houdini, though, she was contemptuous towards ghost racketeers who cynically took advantage of vulnerable people.

At the time of Harry Houdini’s untimely death in October of 1926, Rose Mackenberg had become one of Houdini’s most experienced investigators, with a wealth of experience in busting all manner of clairvoyants, mediums and purveyors of “love and luck potions.”

Mackenberg is known to have written a manuscript detailing her adventures in battling the ghost racket–the final draft was titled So You Want to Attend a Seance?–but, sadly, it went unpublished during her lifetime and remains so as of this writing. It’s likely, however, that her manuscript drew from a series of articles she wrote, which were published in several North American newspapers during 1929. At that time, she had decided to retire from the ghost-busting business, but her retirement didn’t last long.

There was too much work to do. In 1932, Julien Proskauer, another investigator dedicated to exposing the ghost racket, estimated the number of people “suckered” by hoax seances, numerological and fortune telling sessions at 30 million per year, and their losses at $125 million.

Rose Mackenberg persisted in her unusual vocation throughout the Great Depression, investigating on behalf of insurance companies, law firms, Better Business Bureaus, newspapers and similar institutions. During mid-1945 she served as Chicago Tribune reporter E.W. Williamson’s guide to the Spiritualist underworld of the Windy City; Williamson then revealed the mediums’ predatory con-artistry through a series of expose articles. She also began performing lectures and demonstrations for service organizations, during which trumpets floated, tables tipped, glowing “spirit hands” materialized and Mackenberg generally did what she could to expose the tricks of the still-burgeoning spirit racket.

Mackenberg was hardly surprised when the U.S. involvement in the Second World War ushered in another revival of Spiritualism–and then even less startled when it happened yet again during the Korean War. Interviewed in 1951, she estimated that there were then some 150,000 mediums active in the United States, and also noted that she expected that number to rise as long as the War continued.

By that time, Rose Mackenberg–a lifelong “bachelor girl” who kept her New York City apartment well-lit because she had grown “tired of sitting in dark rooms”–had been investigating and debunking Spiritualistic fraud for over three decades. Her “Spook Spy” exposés had been featured in the American Magazine, Look, Collier’s, Popular Science and numerous other journals. Still, she noted resignedly that “no number of exposures, in fact, seem to shake the faith of believers.”

Despite frequent public exposés of prominent practitioners by reporters and skeptical investigators, as of 2013 the modern American “psychic services industry” was estimated to be worth slightly over two billion dollars.

Significantly, though, very few modern mediums attempt the sort of “physical manifestations”, such as ectoplasm and ghostly materializations, that were convincingly debunked as phantasmagoric tricks by Rose Mackenberg and her peers during the first half of the 20th century.

How one NYC policewoman became a media sensation.
crime

From Italy’s fortress-seizing countess to Angola’s battle-hardened Queen Njinga, these women didn’t back down from a fight.
roads

For decades, these women have fought (and won) the right to stunt.
Video