How to Spot the Fossils Hiding in Plain Sight - Atlas Obscura
Want to see fewer ads? Become a Member. 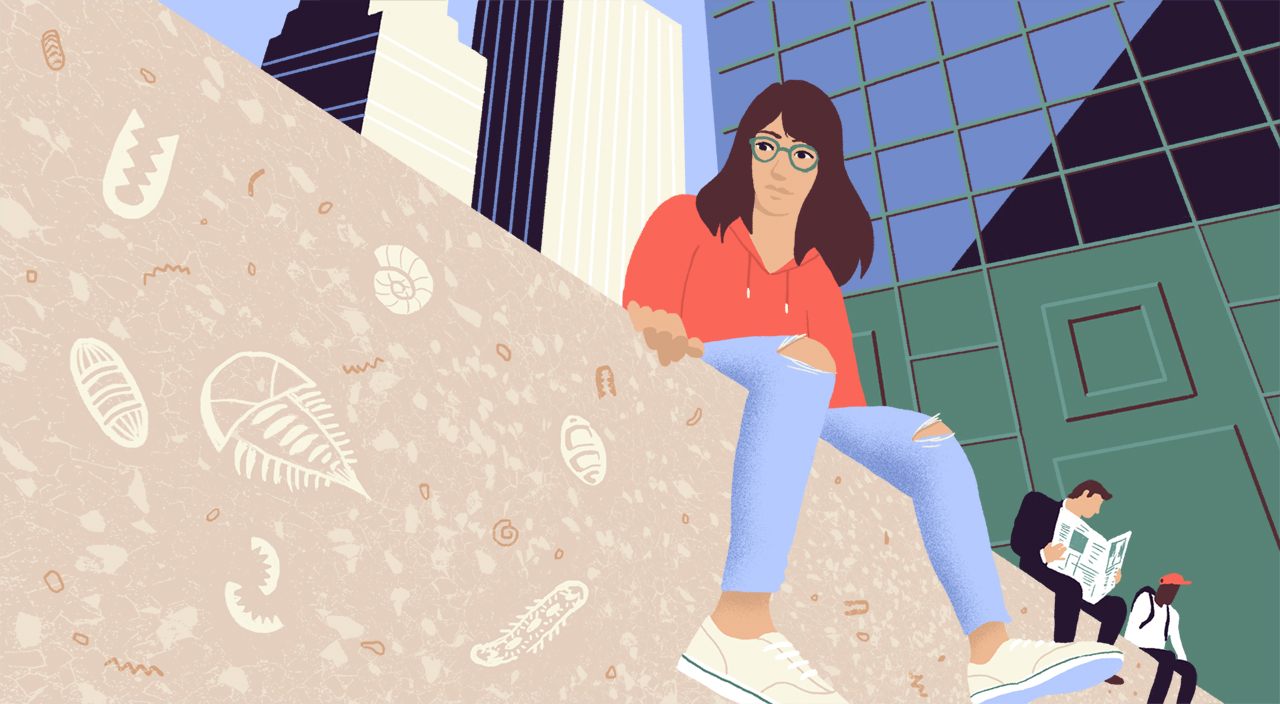 Fragments of prehistoric life are embedded all over the urban landscape. But you have to look close. All Illustrations: Matt Chinworth

Some of the most arresting evidence of prehistoric life is enshrined in museums: fossils, hoisted onto pedestals, interpreted with placards, illuminated by spotlights. But fossils can be anywhere—you likely pass some every day. Countless fragments of shells, corals, and other traces of long-extinct life are embedded in outcrops and the building materials that we stack to make everything from skyscrapers to town halls. Just last month, researchers in Australia determined that chunks of oolitic limestone in the Pentagon and the Empire State Building are full of mineralized microbes that lived 340 million years ago.

There’s no shame in missing these bits of the distant past. The ooids, which give oolitic limestone its characteristically goose-pimpled texture, are scarcely a millimeter in size. Even the larger examples are difficult to detect—and if you do spot, say, an ammonite, how do you know what you’re looking at?

Atlas Obscura asked Ruth Siddall, a geologist at University College London who specializes in the urban environment, for tips on how to maximize your chances of noticing the fossils all around you. Happy hunting!

Figure out where to look.

Many experts have written region-specific guides, which may help you target your search. Siddall’s observations are the backbone of London Pavement Geology, an app and website, and she has guides on her blog. Paleourbana maps finds in Madrid, Buenos Aires, Salt Lake City, Doha, Bogotá, Moscow, and more, and David Williams’s book Stories in Stone: Travels Through Urban Geology reads like a prehistoric road trip across America. Search for a resource specific to your area. A local university’s geology department might be a good place to begin, too. If you’re in the U.S., you could also try your state geologist.

Before you make a go of it by yourself, Siddall suggests seeking out a guided tour. A printed guide would be the next-best thing. Retrace the steps, and try to spot the features it describes on your own. This helps train your eyes.

“A magnifying glass can be useful, but not essential,” Siddall says. It may also be helpful to use your smartphone’s GPS to record longitude and latitude, or other location information. But at the end of the day, your eyes and brain are the ultimate tools.

Your best bet for finding urban fossils is to identify limestone. “Many limestones, but not all, are fossiliferous,” Siddall says. Unfortunately, identifying limestone isn’t always simple. Some limestones are left rough, others are polished smooth. They’re often pale gray or creamy, but can come in other hues, too. “Limestones are softer than most other rocks,” Siddall adds, “but I guess one shouldn’t go around scratching buildings!”

A local historical society might be a useful resource for zeroing in on historic building materials. Or, to focus your quest, Siddall recommends googling your town plus “building stones.” Doing so for New York City, for example, leads to a database where Wayne Powell, an earth and environmental scientist at Brooklyn College, highlights the materials of some of the city’s most prominent buildings.

Powell has documented oodles of fossils in local building materials, including fragments of aquatic bryozoans and crinoids in Tennessee marble, a type of limestone despite its confusing name. The historic J.P. Morgan & Co. building on Wall Street and the USS Maine National Monument in Central Park are both made of this material, and ripe for the fossil-spotting. Powell’s site also spotlights the features of Indiana limestone, Tuckahoe marble, and the reddish sandstone characteristic of some residential blocks.

While there’s a romance to finding some magnificently preserved specimen that everyone else missed, the odds are against you. You’re much more likely to spot shells and corals than bones or leaves—“and certainly not an articulated skeleton,” Siddall says. Limestones frequently form in marine environments, where shells and reefs are the most abundant fossil candidates. “Just by the laws of averages, it is much rarer to get bone preserved than it is shell,” Siddall says. “I do find people overinterpret what they see—I was asked to come and look at a fossil bird in a building and it turned out to just be an oyster shell.”

Try not to get so hung up on scouting for vertebrates that you lose sight of the wondrous qualities of more workaday fossils—and don’t trick yourself into assuming that a humble (but no less fascinating) find is something superlatively rare.

Train yourself to think in two-dimensions.

A fossil in a building slab is likely to lay flush against the stone—it probably won’t protrude out into three dimensions, like many of the ones in museums. To find one, you’ll want to scan a building’s slabs and seams. Let your eyes roam, because fossils could be in any surface—floors, ceilings, walls. They’ll likely be easiest to see in slabs that are polished, instead of those left rough.

Look for patterns and irregularities.

Keep an eye out for shapes that bear distinct patterns that you might already be familiar with—the curve of a seashell, maybe, or the winding branches of coral. Fossils may be a different color than the surrounding stone, so take note of changes in hue: white in a slab of black limestone, or gray against a red or yellow background.

Black veins snaking through a rock may be a sign of interesting geological features, such as the fracturing and melting that can result from a meteorite impact. Siddall’s research on London’s Irongate House is full of information on visual signatures of meteorite activity.

Not sure what you’ve found? Or if you’ve found anything at all? You can reach out to a local geology group, or tap into the knowledge of the online mob. Siddall is glad to field identification questions on Twitter (@pavementgeology).

If you're going to practice writing cuneiform, why not do it on a cookie?
everyday wonderhow toobscura academyprehistoricfossilscitiesgeologyarchitecture

It's a long shot—but if you're keen to look, here's how to start.
architecture

Even a short local walk can hold countless stories.
insects

A guide to scouting for humble treasures on the shore of the Thames.
Video • Object of Intrigue