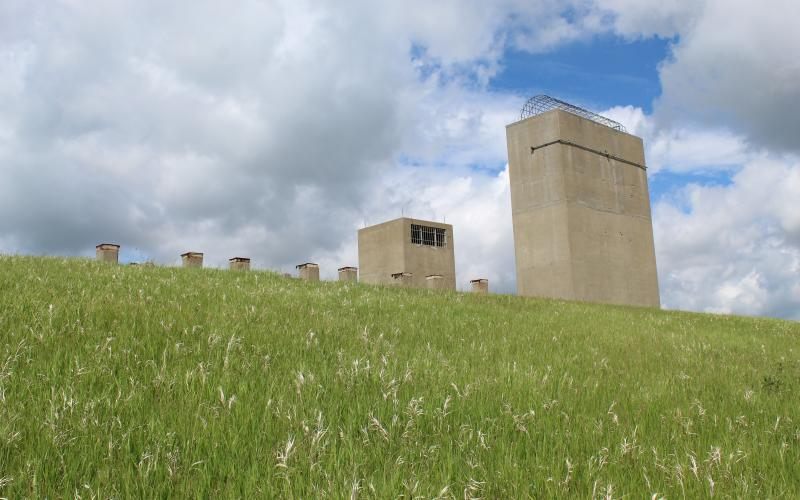 The monolithic Space Age entities are for sale, and surrounded by two stretches of fencing. Courtesy Pifer's Auctions
In This Story
Place

Part of a secret 1970s nuclear defense program is now open to the public.
Place

The Pyramid of North Dakota

The remnants of an early American attempt at missile defense.

Half an hour south of the Canadian border, in Fairdale, North Dakota, a hulking concrete structure rises up from the flat fields that surround it. The beige buildings are so prominent on an otherwise pastoral landscape that they could be mistaken for a 20th-century Stonehenge.

It’s a Cold War missile site, and it’s for sale.

In the 1970s, relations between the United States and the Soviet Union were about as chilly as you’d expect in the middle of a Cold War. Both nations were still locked in an arms race, expanding their arsenals just in case. In northern states such as Montana and the Dakotas, relics of the conflict are strikingly common. “The idea was that if missiles were coming in from the Soviet Union over the Arctic, these were defensive missiles intended to shoot down anyone coming in,” says Dave Keller, a realtor for Pifer’s Auctions, which is selling the property.

The for-sale plot, a 50-acre former missile site and command bunker, is surrounded by double fences and sits a short drive from other sites that formed the Stanley R. Mickelsen Safeguard Complex, a network of missile silos across North Dakota. Others include a six-billion dollar pyramid in Nekoma that looks equal parts Giza and Death Star, and a nearby 30-missile site that is still open for tours today.

The property on the auction block hosted 14 Sprint missiles, named for their short-range, last-ditch trajectories, which were meant to intercept any foreign projectiles that evaded the American military’s longer-range Spartan missiles.

The country’s northern reaches were selected for a couple reasons: They were closer to the Arctic, Keller says, “but also just population. You can put things out in the middle of a field and put a fence around them, put a ‘No Trespassing’ sign up, and people will stay away from them.”

Sprint missiles were 30-foot-long cones that could surpass 7,000 miles per hour. They looked a bit like supersonic thorns, eager to prick a hole in the ballooning threat of a Soviet ballistic attack. The silos that once held the explosives are now water tanks, and much of the site is rusted and overgrown, but that hasn’t slowed demand to own the isolated, concrete hulk.

Keller says calls have been coming in about the site from all over the country. Some calls have been from history buffs, some from entrepreneurs, and some from doomsday preppers, seeking a solid foundation on which to build their bunkers. “You’ve got Covid-19, you’ve got civil unrest—I got a call from one guy who thought this’d be a great place to have a server farm,” Keller says. “It’s safe, secure, and tornado-proof.”

A direct conflict never broke out between the United States and U.S.S.R., and the silo’s explosives were eventually removed from the complex in North Dakota. But the Brutalist-looking architecture remains intact, a strange reminder of the tensions at the time. Today, the silos and bunker are yellow-brown monoliths against a lush meadow and blue sky. They would make a gargantuan fixer-upper.

The auction for the Cold War plot is set for August 11. “It’s remote, you can store stuff, you can go underground,” says Keller. “It’s the ultimate in social distancing.”

It's a ghost town, but it's got a pool.
cold war

If you ever needed a lipstick gun or a heartbeat detector, you could be in luck.
cold war

Germany’s Iron Curtain is now the Green Belt, but turning the old border into a haven for wildlife has taken much more than just letting it be.
Video